2015 Ford Mustang: Inside the Design 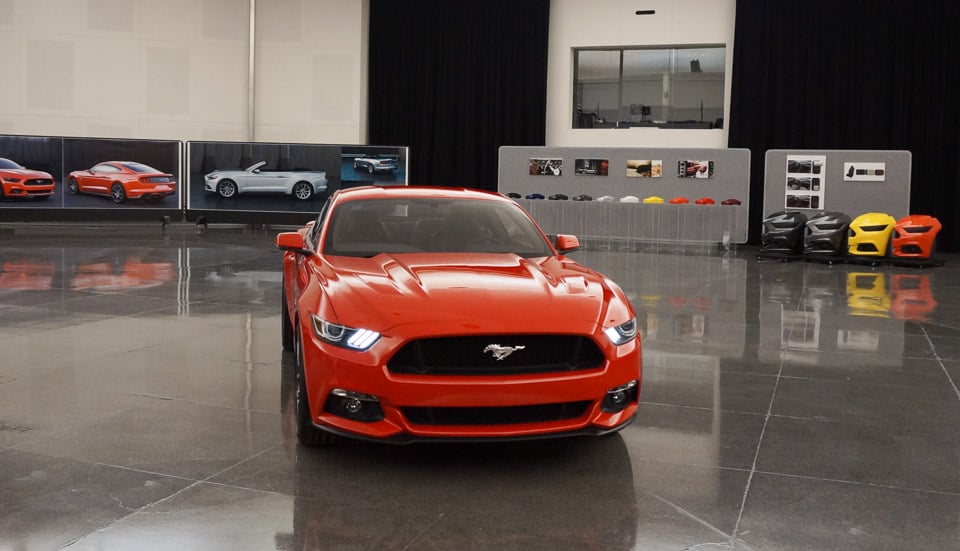 We recently had the opportunity to visit with the design team behind the 2015 Ford Mustang, and learned about the process behind the design of the car, as well as some of the amazing craftsmanship in the design, modeling, and prototyping process.

In designing the new Mustang, the team was challenged with both honoring 50 years of Mustang heritage, while evolving and improving upon recent models, and at the same time reinventing the vehicle for international markets. While we have yet to drive the 2015 ‘stang, we certainly think the design is successful – especially now that we’ve seen it up close and personal.

Ford’s design teams started the Mustang design process with mood boards, and numerous concept sketches to hone in on a design direction for the vehicle, with designs ranging from subtle refinements of the most recent model, to dramatic, futuristic concepts. After working through numerous iterations, the team further refined three core looks, of which one would eventually serve as the basis for modeling. 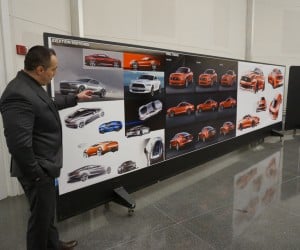 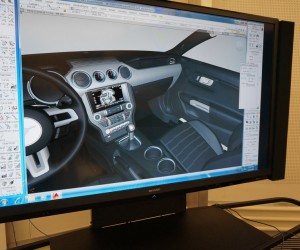 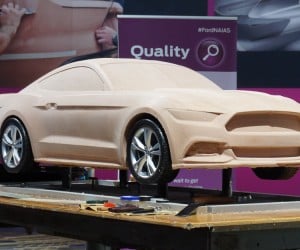 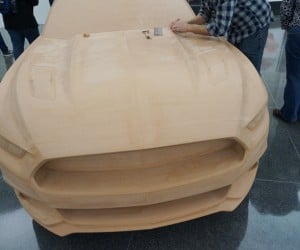 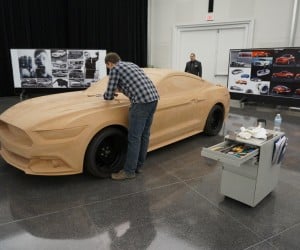 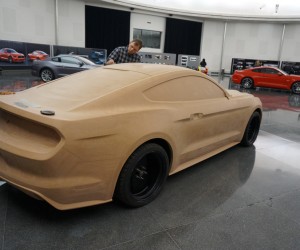 The modeling process started with a 3D digital wireframe which was later covered with surface textures and served as the basis for the construction of clay models. Initial small-scale models were built using clay, layered over a foam and metal structure, and a digital milling machine. This resulted in a rough clay form which was then refined substantially by skilled clay modelers, working closely with the Mustang’s designers. Each time the clay model was refined, the model was scanned and any changes would feed back into the digital model.

Once the core design was agreed upon, full-scale clay models were developed, using the same technique as the small-scale models. Further refinements to the design continued in clay, until such point the team felt ready to build a fiberglass model. 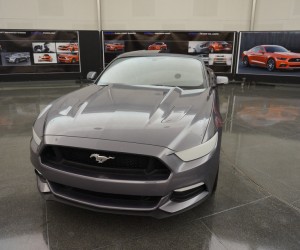 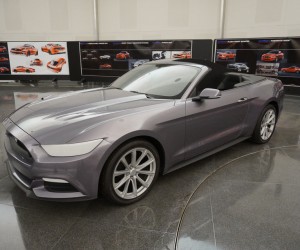 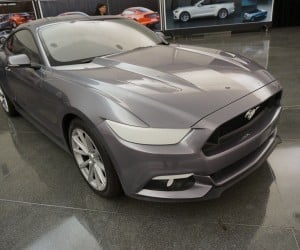 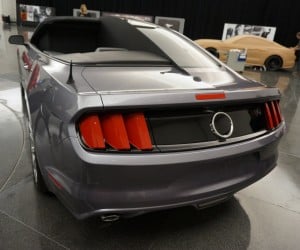 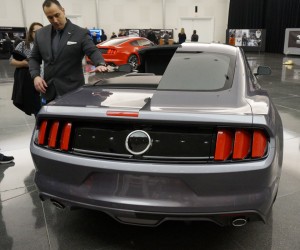 What’s unusual about the Mustang’s fiberglass mockup is that it’s a special “split personality” vehicle, which represents both the coupe and convertible models split down the middle. This way the team could evaluate the differences between the two designs, as well as to assess what components could be shared between the two variants.

A similar design refinement process, from sketch to clay model, to finished color mockup was followed for the Mustang’s interior. The interior clay models even have full seats inside of them so designers and engineers could sit inside of the vehicles and make adjustments before moving on to the more finished interior model, which is also built from clay, but covered with fabrics, coatings and paints for a much more finished look by Ford’s professional colorists. 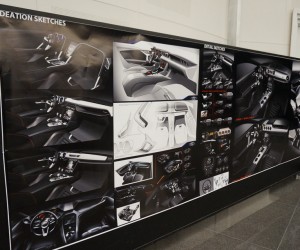 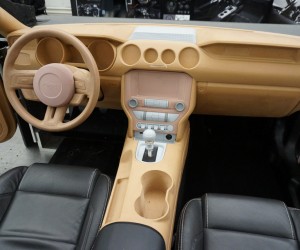 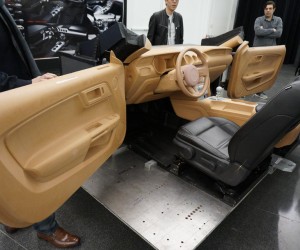 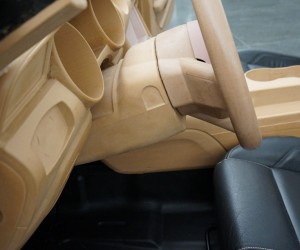 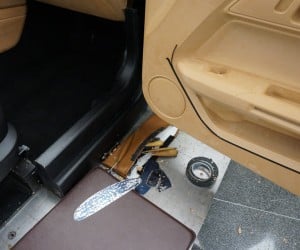 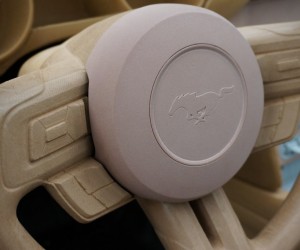 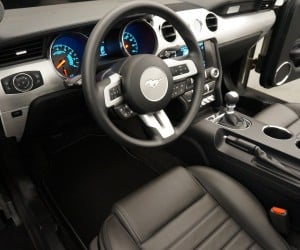 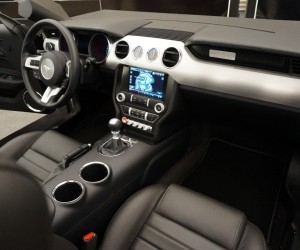 Eventually, all of these design contributions led to the creation of a hand-built prototype of the car, which was crafted using the kind of materials which could be used in a production vehicle, including sheet metal, plastic, rubber, leather and other components. The red car shown here is one such prototype, and looking closely in and around the vehicle, you’d never know it wasn’t a complete production vehicle. Every detail of the final car is present. 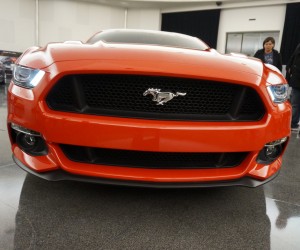 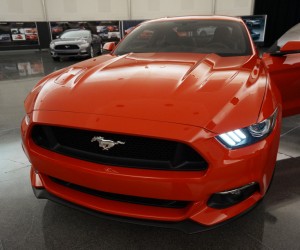 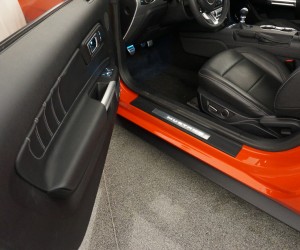 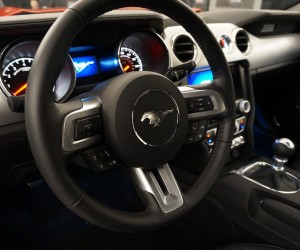 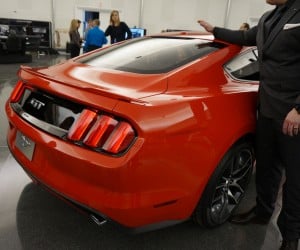 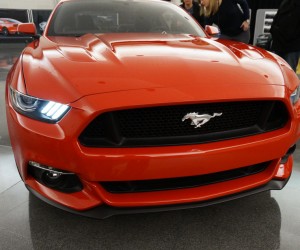 The overall process of designing and developing vehicles is truly extraordinary, and in the case of the Ford Mustang, an amazing achievement given all of the requirements to satisfy existing and potential new customers. It’s amazing to think that all of this design work must also work hand-in-hand with engineering teams who are working on the vehicle’s drivetrain, safety and other systems, and somehow it all manages to come together.

Our hats go off to the Ford design and engineering teams for pulling off such a monumental feat with the new Mustang. We can’t wait to get behind the wheel of one.