As we already know, Jay Leno has a massive collection of classic and modern cars in his massive garage. One of the more interesting vehicles we’ve seen him take for a spin so far is his 1925 Doble E-20, an impressive vintage vehicle that operates on steam power.

Prior to the Doble, most steam-powered cars required drivers to light a torch or match and wait for 10 to 15 minutes for it to heat up before they could drive. This car could actually start up and start driving in just a couple of minutes. Incredibly, this 2.5 ton vehicle once drove as fast as 132.5 mph, way back in 1925 with its then owner Howard Hughes behind the wheel. Thanks to its superheated steam, it sends an astounding 1000 lb-ft. of torque directly to its rear wheels, and could keep up with some of the fastest cars of its era, such as the Duesenberg.

The Doble E-20 was truly an incredible engineering marvel, and Leno does a great job explaining how it all functions. It’s well worth a watch if you’re interested in how things work. Just watching the thing start up is amazing.

It’s interesting to think about how today’s cars are all about keeping the engine as cool as humanly possible, but with steam engines, the more heat produced the better. Can you imagine driving a vehicle with over a million BTUs of heat under the hood? 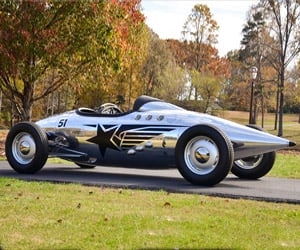