Motor Trend recently got their hands on the new 2015 Jaguar F-Type R Coupe and put it up against the 2014 Porsche 911 50th Anniversary edition in a head-to-head competition.

While both cars are clearly aimed at the same kind of buyers, the F-Type has a 550 horsepower supercharged V8, and the Porsche has a 430 horsepower flat 6. But cars don’t win on horsepower alone, and both cars performed very well, with the Jaguar being the more muscular of the two, and the Porsche being more nimble. Personally, we find the design and sound of the F-Type more engaging, but there’s no question about how well the Porsche handles, and the Jaguar is definitely much more powerslide happy in the bends, requiring more careful application of the gas than in the Porsche. 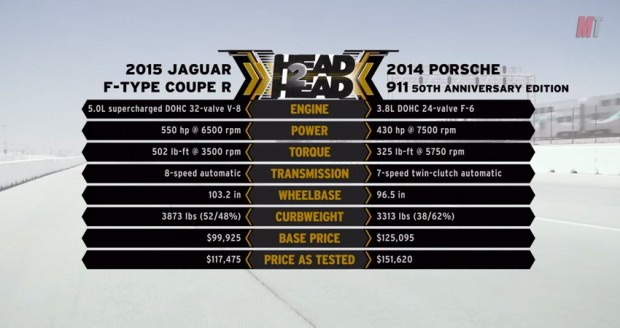 You’ll need to watch the whole video to see how the end result turned out, and if you agree with their opinion.