Tanner Foust of rally racing and Top Gear fame the chance to be the first one to drive the all-new 550+ horsepower Beetle GRC Rallycross. With a 0-to-60 time of just 1.9 seconds, it seems Volkswagen Motorsport and Andretti Rallycross have built a machine that’s more than ready to compete in the Red Bull Global Rallycross championship. On top of the Beetle’s 1.6 TSI 4-cylinder turbocharged and intercooled engine, the GRC has a sequential six-speed transmission and fixed-ratio all-wheel-drive system.

In the video, both Tanner Foust and Scott Speed reveal their GRC-ready Beetles fitted with their Rockstar Energy Drink and 7-Up liveries, respectively and they head out onto the track for the recent GRC event at RFK Stadium. 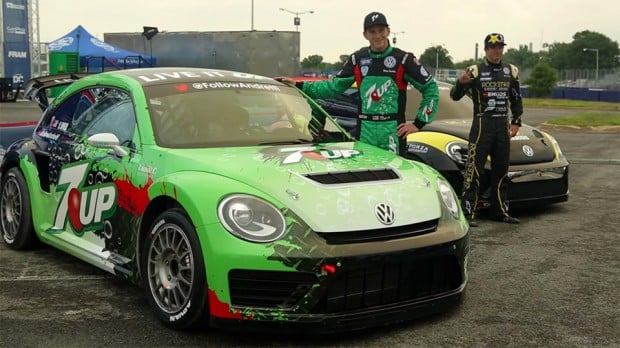