The Dunlop Race Car of the Future

With the advent of Formula E, we’re already starting to see incredibly powerful electric vehicles designed for professional racing. But while these cars offer futuristic drivetrains, their exteriors look much like the Formula 1 cars we’ve been looking at for years. Enter GP and Le Mans racecar designer Sergio Rinland who worked with Dunlop Tyres to show us what he thinks the future of race cars looks like. 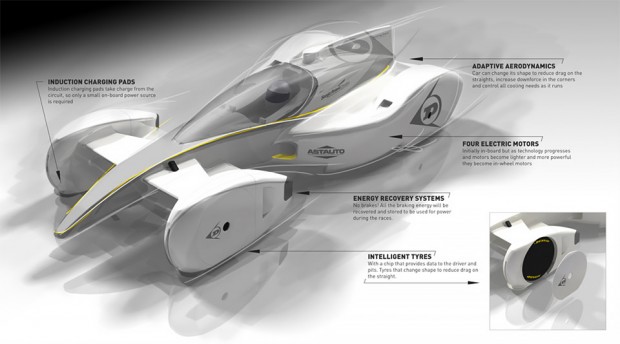 The body design is focused on efficient, high-tech aerodynamics, doing away with wing-style spoilers which introduce drag, instead using adaptive piezoelectric materials which can increase downforce in the corners, without increasing drag in the straights. Naturally, there are no mirrors, but the driver has full 360˚ visibility thanks to numerous built-in video cameras and screens in the driver’s canopy.

The vehicle would be powered by four electric motors (ideally in-wheel), and would eventually use an induction charging system that grabs power from the racetrack instead of being weighed down by massive battery packs. Initially, Rinland expects that a hydrogen fuel cell would be used to generate electricity, until such technology becomes readily available. In addition the car would have special tires which could not only transmit race data to the pits, but could adapt their form to increase grip in the corners, and reduce drag when driving in a straight line.

While it all sounds quite science fictiony to us, there are some sound principles at work here that just need the right technologies to come along to support them. Inductive charging tech already exists, as do shape-memory polymers that can change form when current is applied. As far was we’re concerned, it’s only a matter of time before we see some of Rinland’s ideas emerge in an actual race car.