Jaguar continues to reveal its new XE sports sedan a little bit at a time. Today, they announced some of the connectivity and technology features which we can expect when the car is released.

The XE will be the first Jaguar to feature the new InControl infotainment system, which provides an 8-inch touchscreen head unit with an easy-to-use user interface, including plain speech voice control for key features. In addition, the car will offer smartphone based remote control of vehicle functions, including unlocking doors, starting the engine, or even pre-setting climate controls for each day. 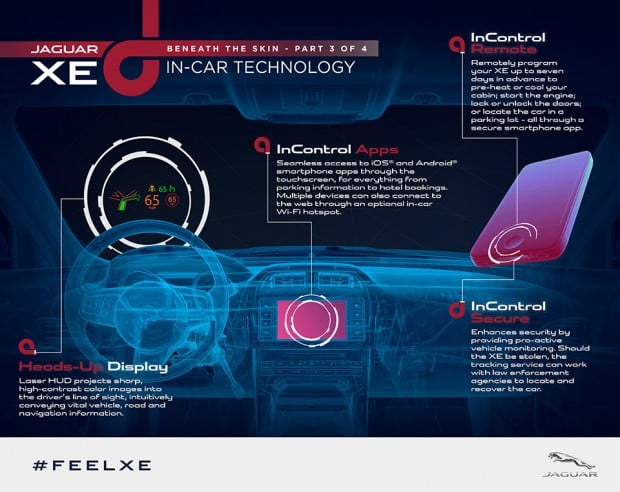 Jaguar also plans on providing smartphone-integrated apps for both iOS and Android, as well as Wi-Fi hotspot ability (with data plan purchase). The car will also offer a high-end Meridian audio system.

Last, but not least, a heads-up display option will provide information including speed, navigation and traffic sign details on the windshield. The display will use laser technology to ensure a bright and easy to read high-contrast display.