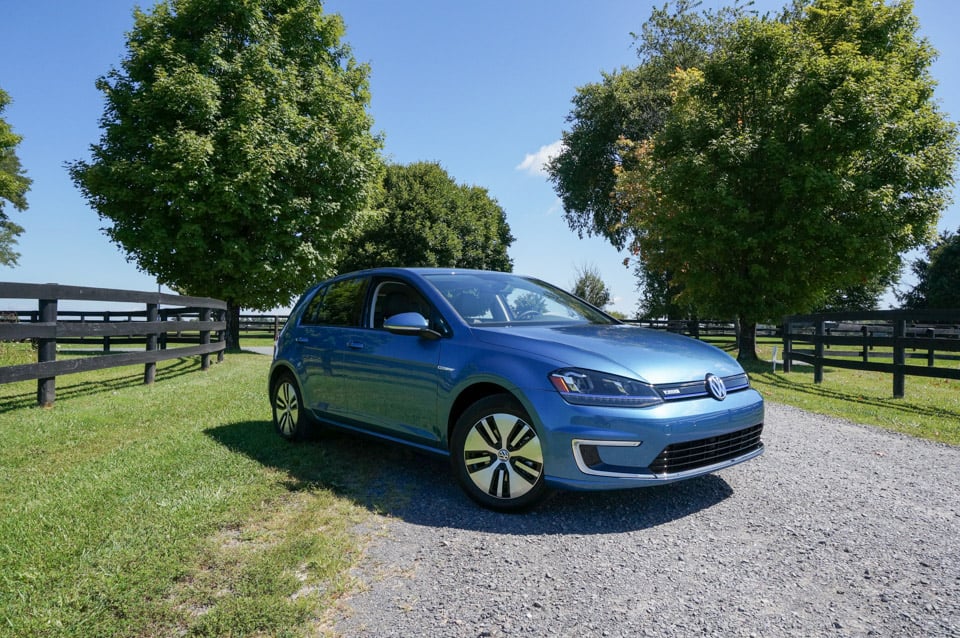 I recently had the chance to take the new all-electric 2015 Volkswagen e-Golf for a drive through the hills and farms of rural Virginia. The four-door compact hatchback is VW’s first fully electric vehicle targeted to the U.S. market and I was impressed with the car’s drivability, performance, and styling. Unlike some electric vehicles, the e-Golf’s styling is subtle and one would be hard pressed to identify it as an electric vehicle on the road, except for its near silent operation.

The e-Golf’s performance comes from a 24.2 kWh lithium-ion battery paired with an electric motor with 199 pound-feet of torque. Power is delivered to the front wheels only and I found that the car accelerated quickly and smoothly from a dead start to driving speed. In normal driving mode, the e-Golf goes from 0-to-60 in just over 10 seconds with an electronically-limited top speed of 87 mph. This is not as quick as the Golf GTI or upcoming Golf R, but it was quick enough for commuting and driving through city traffic. Volkswagen has fitted the e-Golf with a low-speed sound system to help alert pedestrians to the vehicle, but I couldn’t hear much of anything while driving the car with the windows down.

There are three selectable driving modes that provide different balances of performance and efficiency. The estimated driving range for the 3,391 pound car is 70-90 miles, which is plenty for most daily commutes and running errands. And the car is fun to drive to boot, with its low center of gravity thanks to the batteries under the floorboards, and it feels nimble going through the corners as a result. 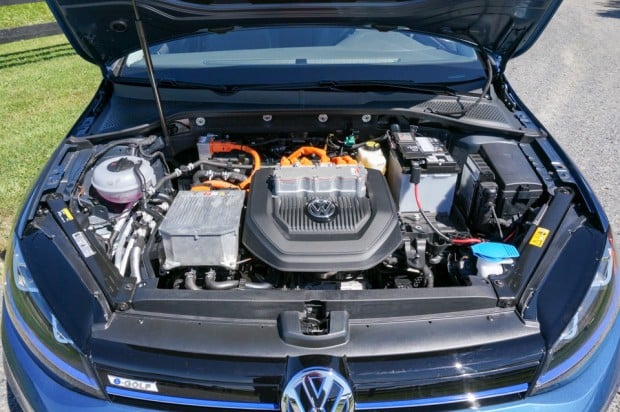 The e-Golf’s styling is carried over from the other cars in VW’s Golf range. One unique feature is that the car is fitted with the U.S.’s first LED-only headlight system from the company. The LED lights offer greater illumination than traditional Bi-Xenon units, yet use less energy. They are complemented by the very cool and easily recognized C-shaped LED daytime running light strips in the bumper.

The e-Golf’s exterior design is also designed to maximize aerodynamic efficiency. Most noticeable are the 16-inch aluminum-alloy wheels that are designed to be nearly flush within the wheel arches, greatly reducing drag. The wheels are also wrapped in low rolling resistance tires. The result of this is a coefficient of drag of just 0.27. 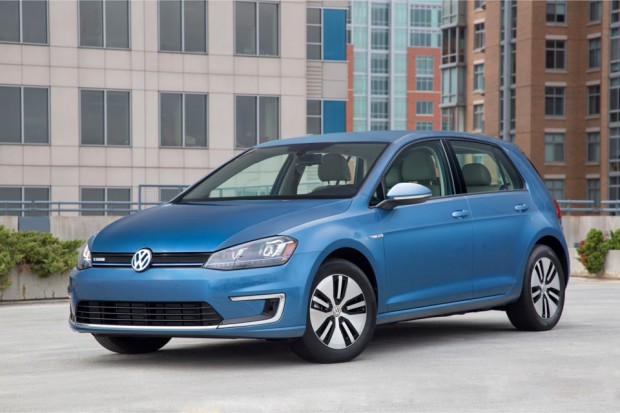 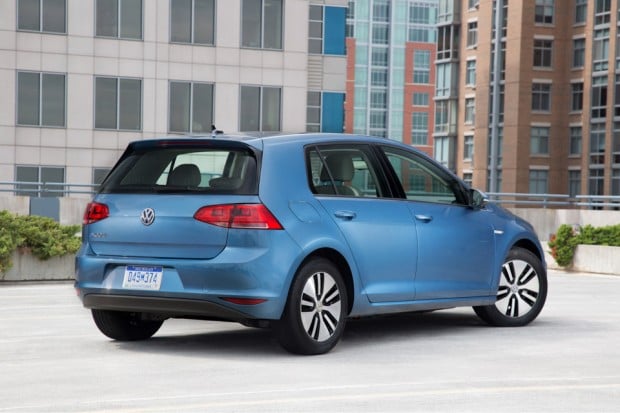 Despite the large battery pack lying underneath, the e-Golf’s cabin offers exactly the same interior volume as other Golf hatchback models at 93.5 cubic feet with 22.8 cubic feet of space behind the rear seats and 52.7 cubic feet of very usable space with the seats folded. The interior also carries over many of the design cues from the rest of the Golf line, with the addition of blue accent elements throughout the cabin and decorative seams on the steering wheel and shifter to indicate the unique character of the e-Golf.

In addition, the instrument cluster has been redesigned to meet the informational needs of the electric drivetrain, with the traditional tachometer being replaced with a power display that indicates if the motor is ready, if the battery is being recharged (via regenerative braking), or if power is being drawn off—as well as an indicator of available output. 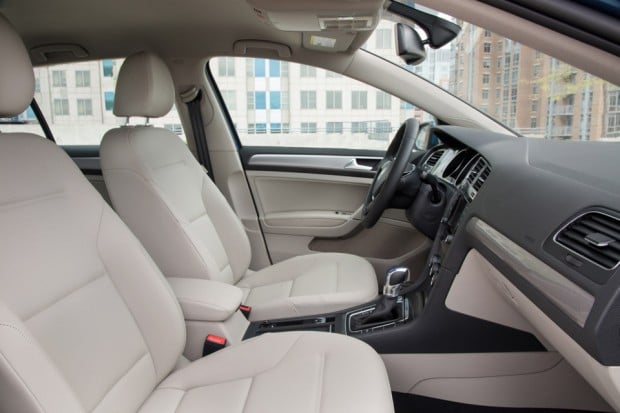 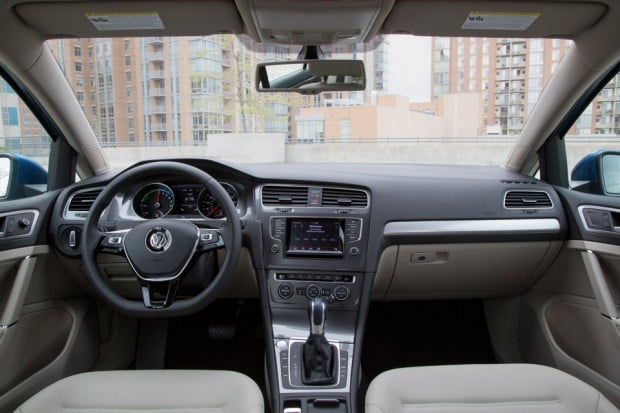 The e-Golf as a Daily Driver

Volkswagen is providing a roadside assistance package and working with technology partners to make the e-Golf a very viable option for drivers. To address those drivers who are considering an all electric but may have “range anxiety” – fearing they’ll be left stranded on the roadside one day when the car runs out of juice – VW offers a Roadside Assistance Plan with every e-Golf. In the event a driver ends up in that situation within 100 miles of their home, VW will respond arrange to have the car transported to a nearby charging station and pay any taxi or transportation fees for the owner. VW has also partnered with Chargepoint to provide convenient access to the company’s network of 18,000 charging stations nationwide. They’ve also partnered with Bosch to spec and install home charging stations for drivers.

Not only is the e-Golf a zero emissions vehicle, but Volkswagen is collaborating with 3Degrees, a renewable energy services provider, to invest in carbon reduction projects to help offset the emissions created from production, distribution and charging of the vehicle equal to 36,000 miles of driving. 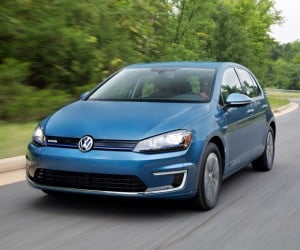 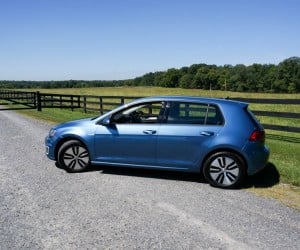 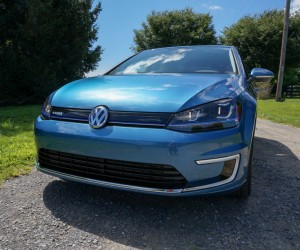 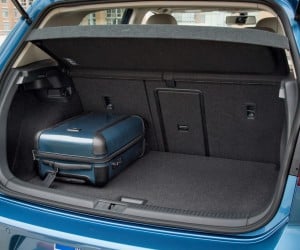 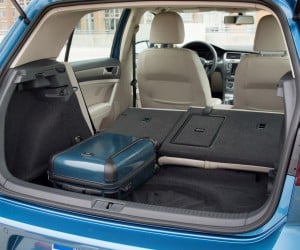 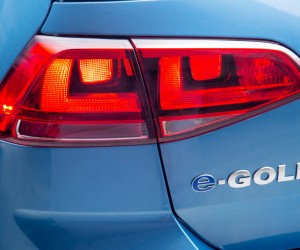 The e-Golf will be available beginning in November, 2014 with a starting price of $35,445 (USD). The only model initially available is the SEL Premium model that features a standard 7.2kW onboard charger, a touchscreen navigation system, a leather-wrapped multifunction steering wheel, dual-zone automatic climate control, and LED headlights. Of course, buyers will want to work with Bosch to have the home charging point installed, which typically runs between $500-$2,000 depending on the setup.

Overall, the e-Golf is a great little hatchback that may be the perfect choice for someone looking to reduce their carbon footprint while still having a practical car for getting around town and running errands. The big hatchback and fold-down rear seats means you can even pick up those big items next time you’re at Costco and get them home without a worry, all while generating zero emissions.