Toyota’s hydrogen fuel cell vehicle, the FCV Concept, will go on sale in 2015 and the car could have a significant impact on the future of transportation. With a 300 mile range, The FCV Concept is powered by an electric engine with the electricity generated via a hydrogen fuel cell. The car’s emissions consist of only water and oxygen. But the hydrogen-powered concept isn’t the only of its kind, but it joins the Honda FCEV and the Hyundai Tucson fuel cell vehicles we’ve seen over the past few months. 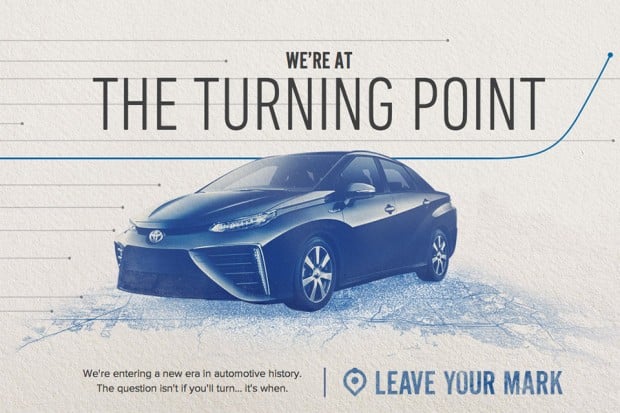 Toyota has begun a campaign emphasizing that we may be at a “turning point” in the history of transportation in the United States. Hydrogen fuel cell vehicles can be refueled in just 3-to-5 minutes and hydrogen may be a viable alternative to fossil fuel because it’s only emission is water vapor and it can be produced as a renewable resource by solar or wind power.  Toyota’s campaign seems intended to put the issue at the forefront of the discussion surrounding fuel efficiency and the environmental impact of transportation; ranging from CAFE standards to all-electric plug-in vehicles to hybrids and more. But many issues still need to be addressed, not the least of which is the need for a robust infrastructure to support hydrogen refueling. As a matter of fact, The FCV will initially be available only in California, where Toyota has partnered with the University of California Irvine’s Advanced Power and Energy Program (APEP) to help map out potential locations for new hydrogen fueling stations.

There will certainly be a lot of hurdles ahead before something like the FCV Concept will be feasible and widely accepted, but Toyota may be one of the companies helping to define the future of the industry.