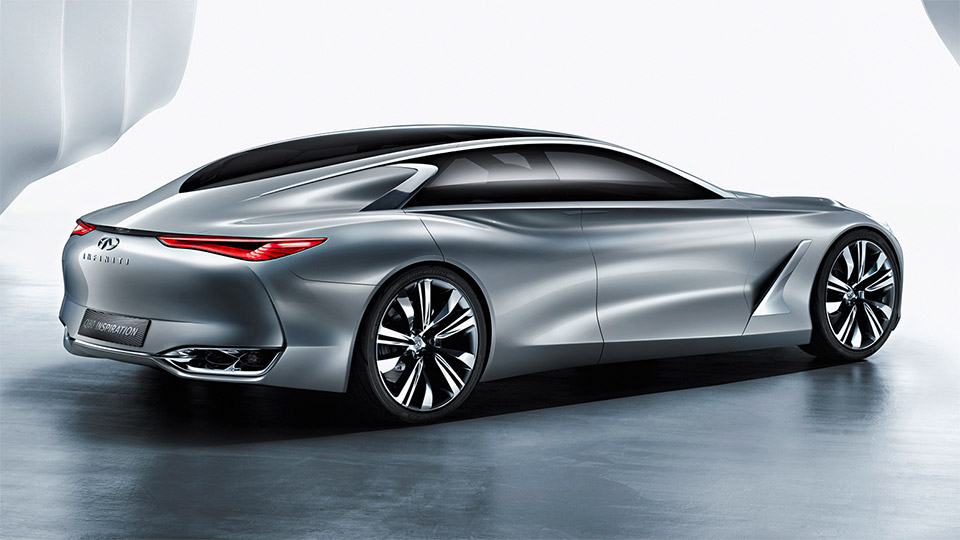 While the Q50 Eau Rouge is currently the car I’m most excited about in the hopper at Infiniti, this futuristic concept car certainly has piqued my curiosity. The top-of-the-line Q80 concept is a four-door hybrid that looks really, really long and lean.

Measuring in at 198.9 inches-long, with a 122.2 inch wheelbase, the car is definitely up there in length. To put that in perspective it’s a full 10 inches longer than the Q50, 3 inches longer than a Q70, and nearly as long as the limo-esque Q70L. Riding only 52.1 inches-tall and 79.8 inches-wide further accentuates its aggressive stance. However, as a conceptual design, it’s likely to sport dimensions that are much more exaggerated than any production vehicle it might lead to.

Access to the passenger cabin is accessed via “portal-style” doors, I suppose because calling rear-swinging doors “suicide doors” has negative implications. Interior materials include carbon fiber, aluminum and leather. Inside the car is said to offer “1 + 1 + 1 + 1” seating, which I imagine means that each seat has its own independent environment and controls – though it could also mean that each passenger sits one behind the other, though I’d think you’d need a much longer car to pull that off effectively.

Infiniti will be showing off the Q80 sedan at the 2014 Paris Auto Show, with the big reveal set for October 2. I’ll be sure to share more details once the car is revealed.