In what amounts to the best 2015 Super Bowl commercial (at least in my car-loving opinion), With Dad by the folks at Nissan did things up right with a touching father-son ad that briefly showcases the new Nissan Maxima. And it delivers a knockout punch in its return to Super Bowl commercials after an astounding 18-year absence. Regardless of what you might think about the daring design of the new Nissan flagship sedan itself, you can’t help but love the racing footage of the new Le Mans GT-R LM Nismo that packs 1,250 horsepower, along with numerous shots of the ruggedly handsome dad/driver. It must be rough to be a dashing race car driver. 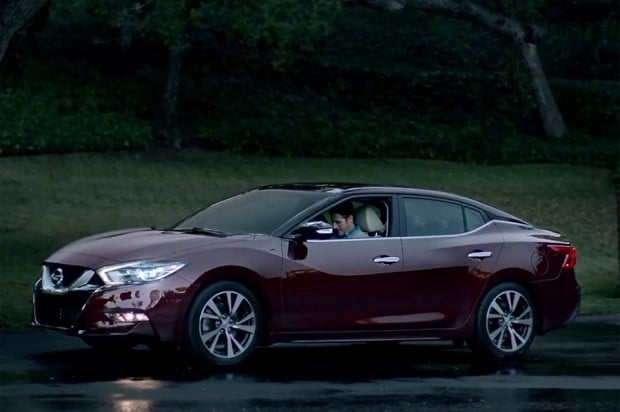 In a slightly less attractive package than the Le Mans car is this new Maxima with its “look at me, I’m not an Altima!” persona and design that borrows heavily from the new Murano with its numerous lines and creases. You’ll notice the radical C-Pillar that looks like a Japanese rendition of the BMW M1 Hommage car’s trailing pillar. Aside from the histrionic design elements, we do think it’s a good move for Nissan to draw attention to a car that still hasn’t found its design sweet spot since the first generation Maxima we loved so much.