How Russians Deal with Obnoxious Drivers

I once spent a month in Saint Petersburg, Russia. Many things I did and saw were amazing and wonderful, like the Mariinsky Ballet, the Peterhof, and the Church on the Spilled Blood, but the problem was that I nearly got run down by lunatics in brand new Range Rovers or dilapidated Ladas when trying to get to any of these places. There’s a cadre of drivers in Russia who are dangerously selfish, and genuinely don’t care about the law or the safety of pedestrians. I also saw my then-girlfriend, now-wife get forcibly pushed out of a bus by a babushka-wearing an elderly ’80s woman’s pink, ruffled curtain, but I digress.

That’s why this is so brilliant; it’s called the “Stop a Douchebag Movement” and it’s made up of a bunch of people who stand on sidewalks and stand in the way of selfish jerks who try to use them as private roads.

If the driver refuses to back up, the movement plasters a giant sticker that reads “I don’t care for anyone, I just drive where I want,” in Russian, of course. The best part is that the stickers really, really don’t want to come off. It’s going to be hours of scrubbing to get those windshields clean again. 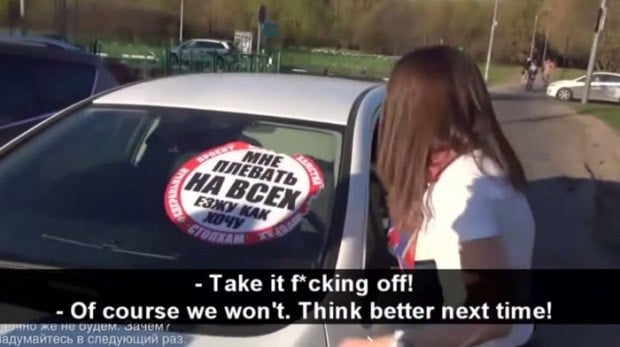