The Bloodhound SSC project aims to launch its jet-powered car at speeds up to 1,000 mph. While there are many engineering challenges to such an achievement, one that I never thought about before now is that the cockpit needs to be able to shelter its pilot from any flying debris kicked up during his mission.

In this video, we learn about the ballistics testing being conducted to simulate the impact which could hit the cockpit – especially if even a piece of one of the vehicle’s wheels were to come off. According to simulations, each of the cars aluminum wheels will be spinning at an insane 10,200 rpm, and pushing out 50,000 radial g at the rim. So basically, if a piece of the wheel were to break off it would be something like getting hit by artillery fire. 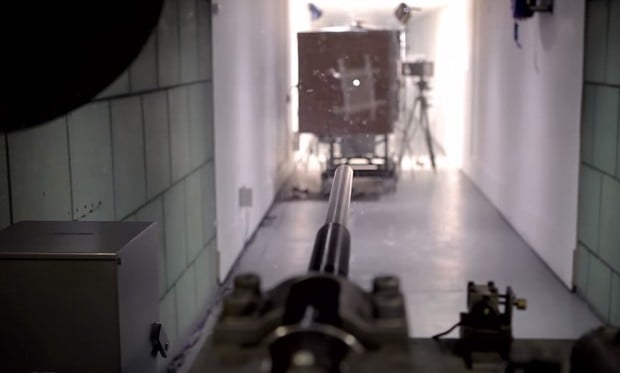 Working in concert with Morgan Advanced Materials, the Bloodhound team developed a lightweight ballistic panel, which contains woven glass fibers to help dampen the blow of any projectiles which come its way. Check out the video to see the testing in action.