Nitto’s Battle on the Street: A Supercar Bracket

College basketball is all about the brackets this time of year, so everyone’s trying to get in on the action. The guys from Nitto Tire are running their own rounds of playoffs between 16 awesome supercars for drag racing supremacy.

The Battle of the Streets includes a field of amazing cars which are racing against one another on Los Angeles’ famous 6th Street Bridge (which was shut down especially for this event). Among the cars in the field are a Lamborghini Aventador, Rolls Royce Phantom, Ferrari 458, Audi RS5, Porsche GT3(991), Antron Brown’s Toyota Dragquoia, Mercedes AMG C63, Lexus LFA, McLaren 650S, Ford Mustang 5.0, Ford GT Heritage, Dodge Challenger, Chevrolet Corvette, Nissan GT-R, Mercedes McLaren SLR and the Saleen GTX Tesla.

The winner of the overall contest will grab a trip to the awesome Exotics Racing in Las Vegas to get behind the wheel of a supercar. Should there be a tie, the contestant who guessed the closest elapsed time for the winning car will take home the grand prize.

So what are you waiting for? Head on over to The Battle of the Streets and enter your brackets between now and March 25, 2015. The rounds will play out starting on March 26th, with the finals being posted on April 6th. 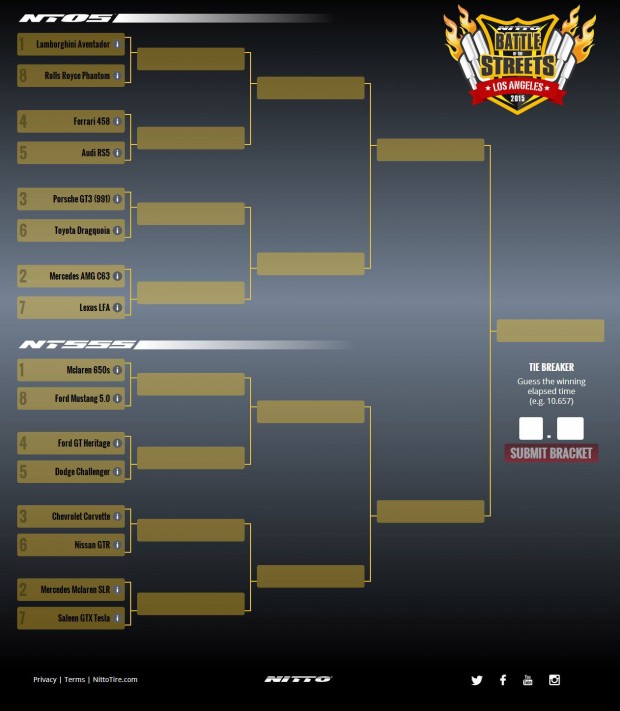