In an obvious attempt to stay cool and relevant, Mercedes-Benz recently hooked up with the Panda-masked German rapper CRO to let him loose with some spray paint cans to see what kind of art he could make out of a new CLA. According to CRO, “I paint and draw almost always, no matter where I am or what I’m doing. Nothing is safe from me and, indeed, not a Mercedes-Benz.”

A video documents the artistic deed, showing CRO enter a garage with the CLA waiting there taped up and ready to be paint-bombed. And after caressing the car and making a few laps around it, he begins to seriously remodel the looks of this ride using dozens of spray paint cans, conventional paint and paint pens. He scrawls words like “Yes” and “Hot” across the CLA’s surface, splatters and drips paint in some places and draws primitive figures in others. At the end of the clip, he boastfully stands in front of his creation with a paint can turned flamethrower in each hand. 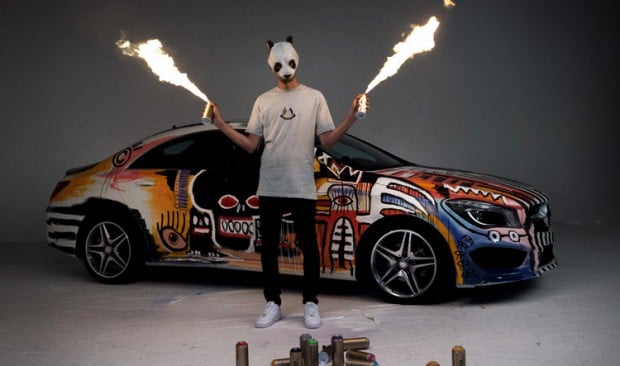 What’s the final work like? I love it, even though it looks a little bit too much like Keith Haring and Basquiat tagged teamed it. But not everyone feels the way I do. One comment I read online described it thusly: “looks pretty stupid and fugly.” Like it or not, it’s gonna get some attention, which is just what Mercedes wants.