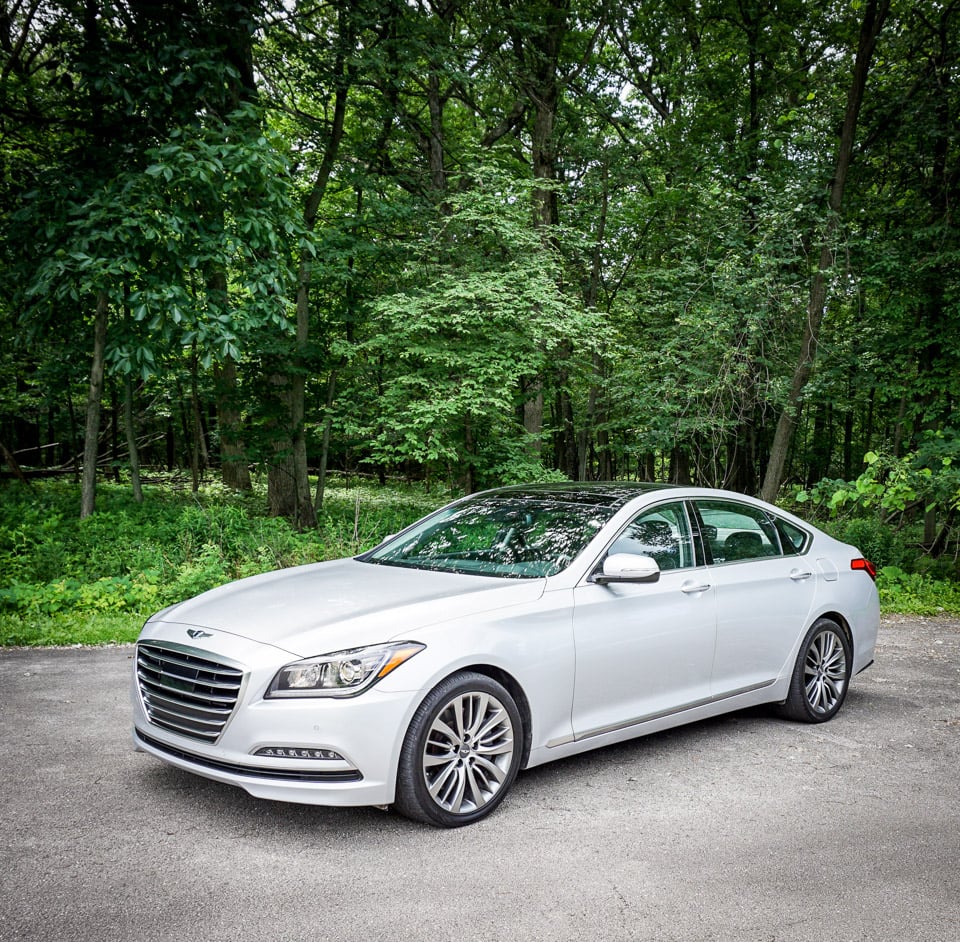 A few months back, I had the opportunity to drive the 2015 Hyundai Genesis in its V6 AWD variant. I really loved it, and thought it was one of the best cars I had driven this year. Now, I’ve spent the last week driving its more performance-oriented brother, which rocks a 5.0-liter V8, and a rear-wheel drivetrain. So is the price difference and tradeoff in fuel economy worth it? Read on, and find out.

For starters, the V8 Genesis is visually identical to its less powerful sibling, with the exception of its LED fog lights and 19″ premium alloys. It’s still a great looking car, with a more assertive design than many of its competitors – especially its massive and imposing front end. I’ve really grown to appreciate that Hyundai went out on a limb with such a dramatic statement, though I still wish they could have found a better way to conceal the front radar. 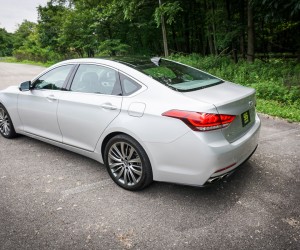 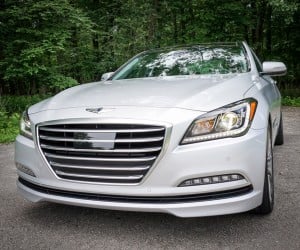 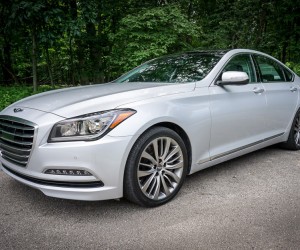 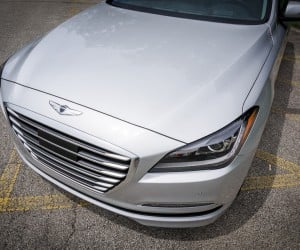 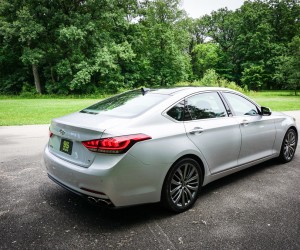 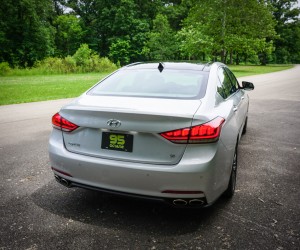 I was pretty darned happy with the way the V6 handled, and the V8 is just as much of a joy to drive. Despite its giant engine, the interior of the Genesis is one of the quietest I’ve experienced, offering a luxurious and comfortable environment in which to explore your lead-footed tendencies.

With 420 ponies galloping beneath its hood, you’ll be at 60 mph in just about 5 seconds. Not bad, given the fact that the V8 weighs almost 250 pounds more than the AWD 6. And despite all of that power going just to the rear wheels, I always felt like the Genesis was composed and did exactly what I expected in the corners. The suspension provides great road feedback without being harsh, in part thanks to the continuous damping control suspension system, which transitions beautifully from harsh, potholed city streets to smooth highways, and bumpy country roads. If the suspension in the V6 model scored an 8 out of 10, this suspension is a solid 10. And if you want continuous damping, you have to go for the V8 model. 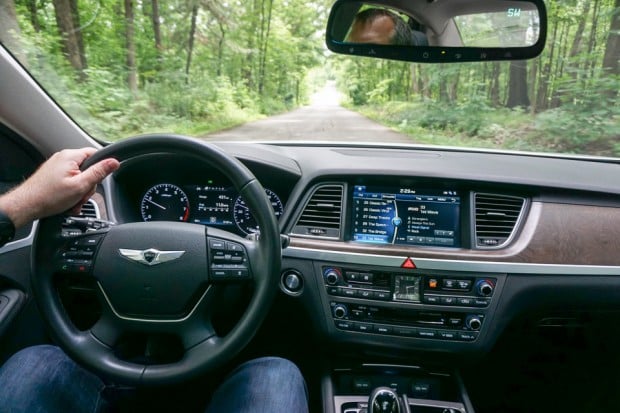 The V8 Genesis definitely is zippier than the already good V6, and therefore a bit more fun for gearheads like myself. That said, you can get into an entry level V6 Genesis for as little as about $38,000, while the V8 starts at $51,500. Though to be fair, the V8 comes with lots of standard features that are options on the V6. In fact, the fully-equipped V6 I drove was priced just about $3,000 less than the V8. Fuel economy isn’t anything to write home about, but I don’t really expect much from a 4,500 pound, V8 luxury sedan. That said, my real-world average was about 16 mpg – a couple mpg below the sticker’s 18 combined spec, and just a hair lower than what I experienced with the V6. 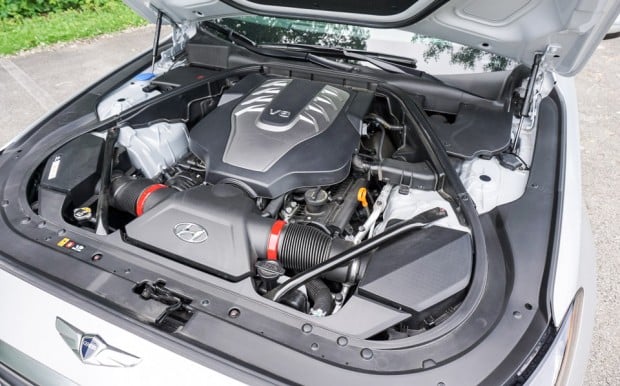 The cabin of the Genesis is exceptional, with premium materials throughout, including heated and ventilated leather seats with extendable leg cushions, real matte-finish wood on the dash and doors, and aluminum accents. Build quality is also top-notch, without an unfinished edge, rattle or squeak to be found. The dash is well organized, with a useful 7″ digital info screen in the instrument cluster, along with a massive 9.2″ touchscreen for its infotainment system. There’s also a heads-up display for speed and other supplemental info. A giant panoramic sunroof floats overhead, giving the cabin a great sense of openness. The 17-speaker Lexicon audio system sounds great too, and I think that Hyundai and Kia share the best and most intuitive infotainment and navigation interface on the market today. 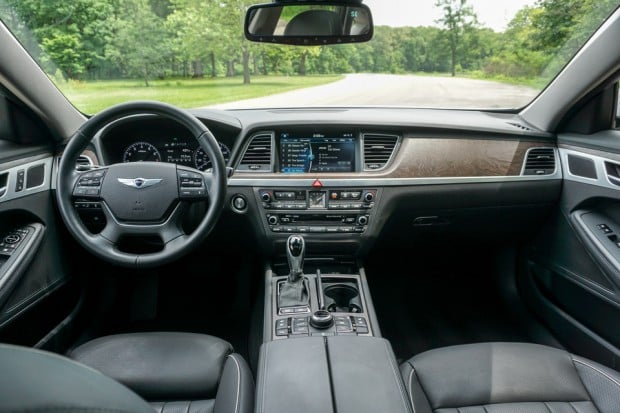 On top of its creature comforts, Hyundai loads the Genesis with just about every bit of safety tech you’d ever need, including blind spot monitoring, a rear camera with cross-traffic alert, lane departure warning with lane-keep assist, automatic emergency braking. It’s also got one of the best cruise control systems on the market, capable of not just maintaining distance and speed, but braking as needed. This works brilliantly if you’re stuck in slow-moving traffic on the highway. 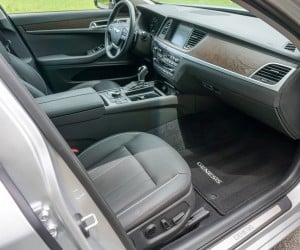 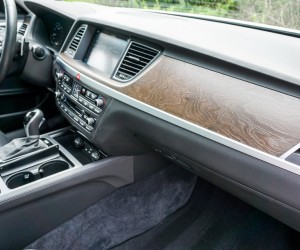 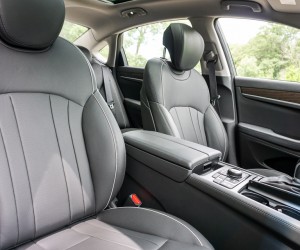 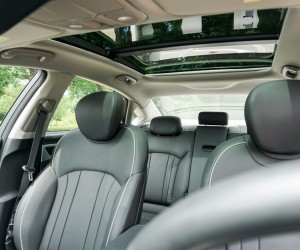 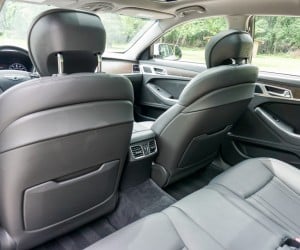 So what can I say? Having driven both the V6 and V8 variants of the 2015 Genesis, I’ve concluded that it’s the best overall car I’ve driven in the last year. I say that because Hyundai has achieved the perfect balance of comfort, luxury, style, performance, technology and value in a single car. Are there cheaper cars on the market? Sure. More sporty? Yep. Fancier? For a lot more money. But Hyundai’s ability to deliver at a high level in all of these areas in the same vehicle, at a price that trounces most luxury brands is a major achievement. 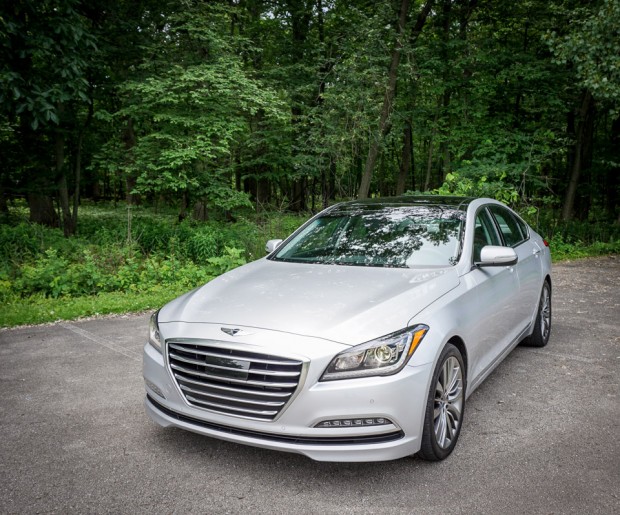