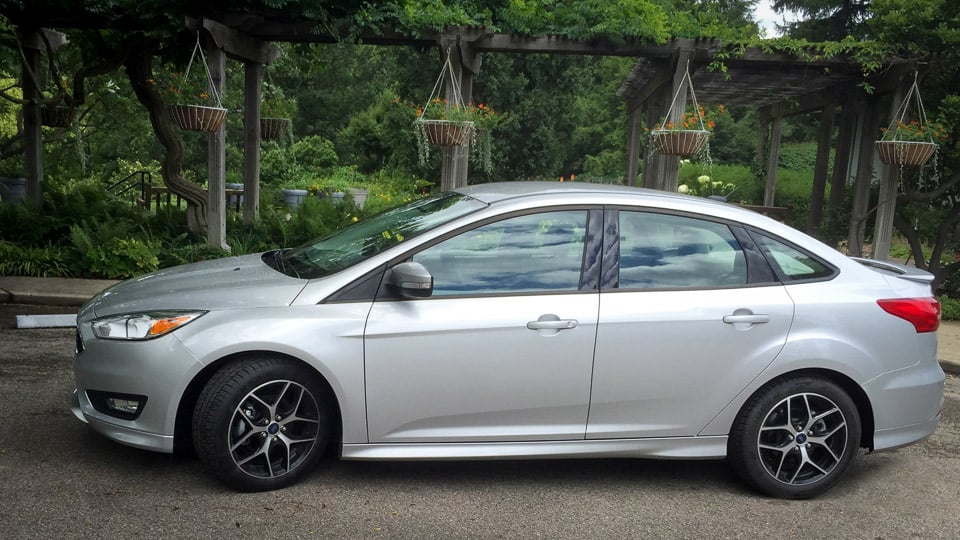 I could do a bunch of bad puns around the word “focus” for this car review. But that’s probably been done and is kind of cliché. I could say that Ford had lost focus on the compact car segment over the last couple years, but that would be incorrect anyway. In fact, Ford has continued to improve their compact car entry, the Ford Focus, through the years. For 2015, the Focus is as good as it’s been.

The changes for this model year are significant. It technically can’t be categorized as a redesign, but dare I say it’s a re-Focus (groan!)? Whatever we call it, the Focus has new looks, new technology and a new engine.

On looks, you’ll notice a difference with the Focus. It’s more modern looking. The hood is the most striking of the new features for this model year. The crisp lines on the hood go well with the overall design direction Ford is taking with other vehicles. It’s almost like this is Ford’s signature look for the time being. It’s handsome and distinctive and I always give high marks to all car companies that can provide style and distinction to cars on the road. The 2015 Focus is easy to spot on the road between the aforementioned new hood, and the redesigned grille with the squinty new LED headlights. The entire front fascia is new and shows an excellent design evolution for this compact car. 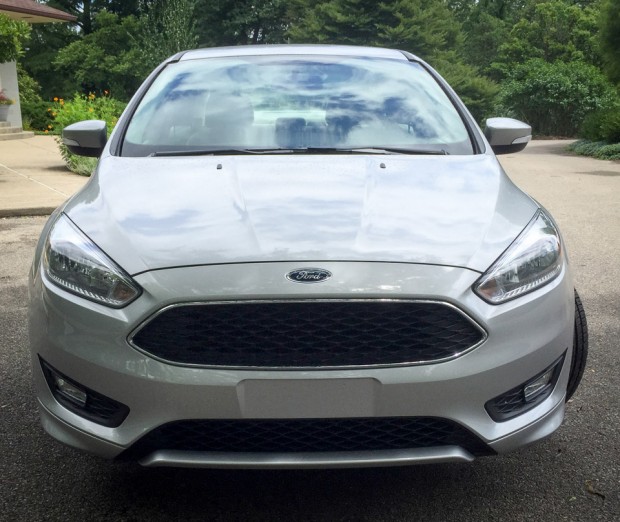 Personally, I think the Focus looks best as a hatchback rather than a sedan. The design of the fifth “door” just seems to flow better with the Focus’ new looks. I drove the sedan, and after seeing a hatch in the same color as the one I drove, it was quite obvious to me, that the hatch was the better looking of the two.

With an attention to the overall looks for this model year, I could say that Ford focused heavily on the overall aesthetics this year (yeah I went there!). 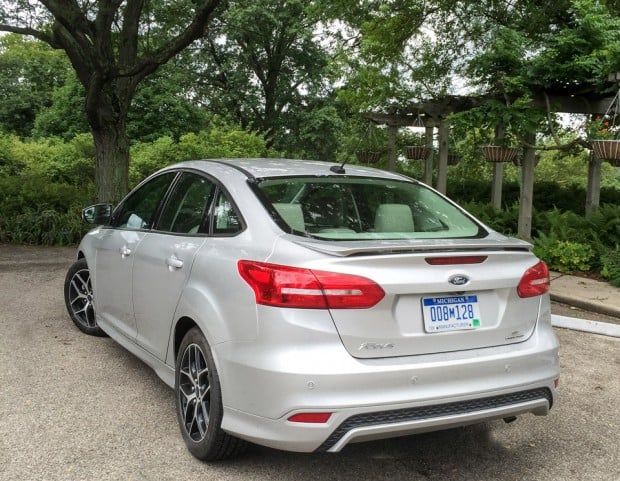 Looks are fine and everything, but a car is only as good as its engine. Back for this year is a 2.0-liter 4-cylinder gasoline direct injected (GDI) engine. This engine was the first big change for the Focus and occurred a few model years back. It’s been a good, fuel-efficient engine. Ford has committed to GDI technology in just about every vehicle in their line. However, an even smaller engine is available for the 2015 Focus. A 1.0-liter 3-cylinder Ecoboost engine is the most significant change to this model year. As Ford has managed to do of late, they get a lot of production out of this small engine.

The new 1.0-liter engine makes 123 horsepower. When compared to the 160 horsepower output of the 2.0-liter engine that seems significantly underpowered. I drove the 2.0-liter and found it to be barely powerful enough. It’s not spry, but gives just enough power when needed. Off the line it’s slow, but then kicks in and is comfortable at highway speeds.
The 4-cylinder engine comes with either a six-speed automatic transmission or a manual transmission. The new 3-cylinder comes only with a manual and seems to be the car that many enthusiasts will turn to. The six-speed automatic in my tester is actually a dual-clutch type transmission that Ford calls Powershift. It’s not my favorite transmission and has some of the annoying quirks of a CVT transmission where it seems to take the shifts some time to go to the next gear. This seems to hold back the overall drive performance of the 2.0-liter engine. I bet the 1.0-liter with the third pedal on the floor remedies this problem altogether, but there’s a power tradeoff.

The most striking updates to the Focus have been done on the inside. An all around improvement to comfort and quality is quite noticeable. Materials are significantly better than the last generation while the seat angles are conducive for driving, but also quite comfortable for both driver and passenger. Rear seats lack legroom in the sedan version. The hatch offers a little more space, especially in the cargo area. The sedan has a 13.2 cubic foot trunk while the hatch has 23.8 cubic feet of space and then also expands further with fold flat 60/40 seats to take overall cargo room to an impressive 44.8 cubic feet. Based on comfort and cargo alone, again I recommend the hatchback over the sedan.

The infotainment system continues to use the Ford MyTouch system, which has been maligned by some critics in the past. I’ve never found it to be that bad, and discovered a very modern feel and intuitive integration with my smartphone on this year’s Focus. Like most infotainment systems, it takes a little finagling to figure everything out, but once you do, you grow to appreciate the modern updates and integrated technology found in this year’s Focus. 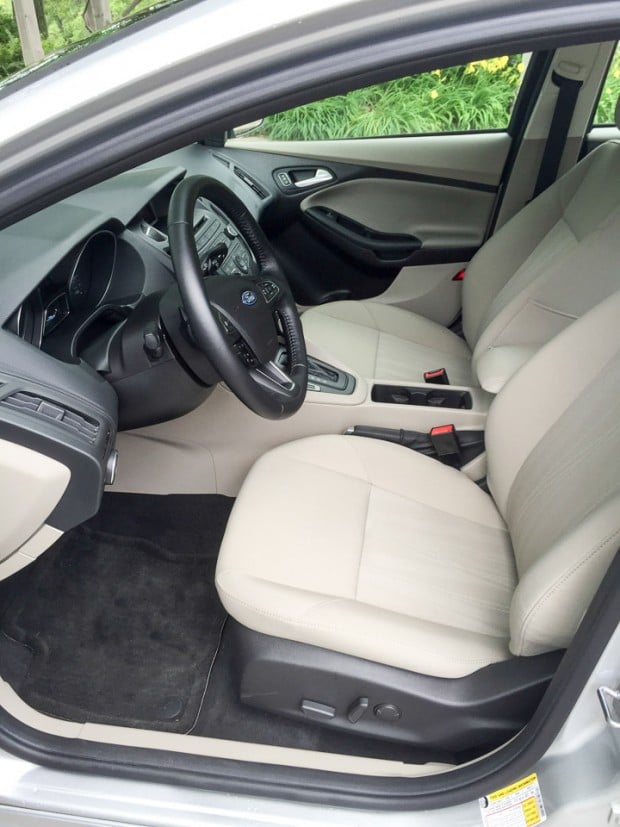 Much like the Focus has continually improved and evolved in appearance, so has the interior. In fact, the interior of the Focus is arguably one of the best in the compact market. If you can forgive the minimal space in the back seat, then for a two passenger vehicle, or daily commuter, it’s a major contender. 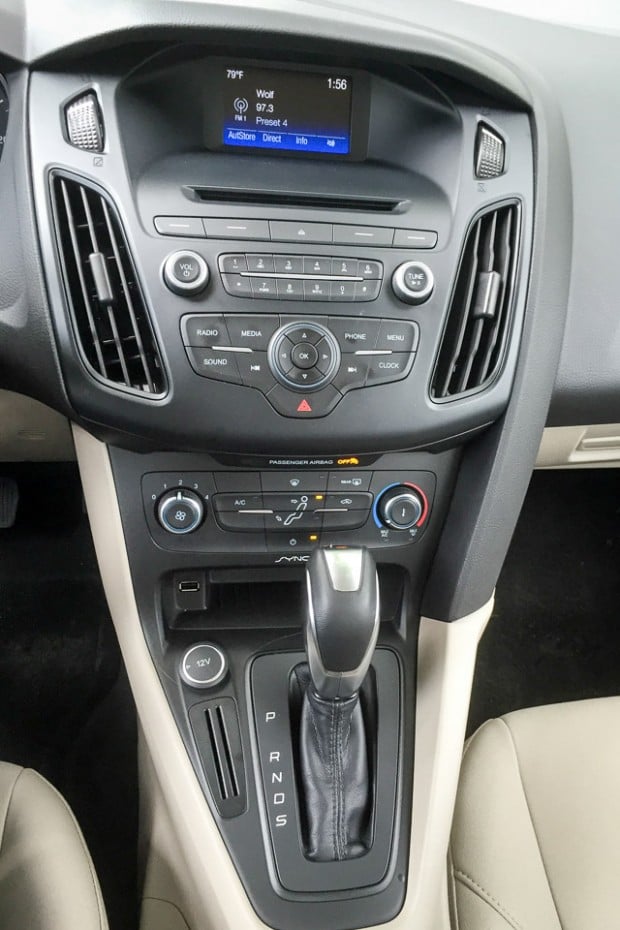 The Focus has three trim levels and two body styles (although the base S trim is only available as a sedan and not as a hatch). Additionally, there’s a tuned-up Focus ST with a lot more oomph aimed at the enthusiast/tuner crowd. There’s also the Focus Electric, which is more of a CAFE vehicle for Ford than a major seller.

Some fun and added value technology can be found on the higher trim SE and especially so for the top-of-the-line trim Titanium. Available add ons for the SE trim include rear parking sensors, heated front seats and steering wheel and paddle shifters. The Titanium trim has a blind-spot monitoring system, lane departure warning system and automatic parallel park assist. If you’ve never experienced the park assist in a Ford vehicle, you’re missing out on amazing technology. It’s especially good for drivers who have anxiety over parallel parking. Although with this diminutive front-wheel drive vehicle, parking is easy, even in smaller spots.

In fact, the small size is part of the big charm of the Focus. It corners well, maneuvers through parking spots easily and is a phenomenal urban vehicle.

Fuel economy is near the top of the segment for the Focus. With the addition of the new 1.0-liter Ecoboost engine, that engine now has an EPA average of 33 mpg combined with a rating of 29 mpg/city and 40 mpg/highway. My tester did almost as well and had an EPA rating of 26 mpg/city and 38 mpg/highway. In a week’s worth of mostly suburban driving, I averaged just over 30 mpg.

2015 is a good year for the Ford Focus. As either a sedan or a hatchback, the car has evolved into a modern-looking fuel-efficient daily driver. With an improved interior and just enough technology, Ford has done a nice job of keeping this car relevant and updated. I look forward to seeing how this popular compact car continues to evolve over the next couple of years.