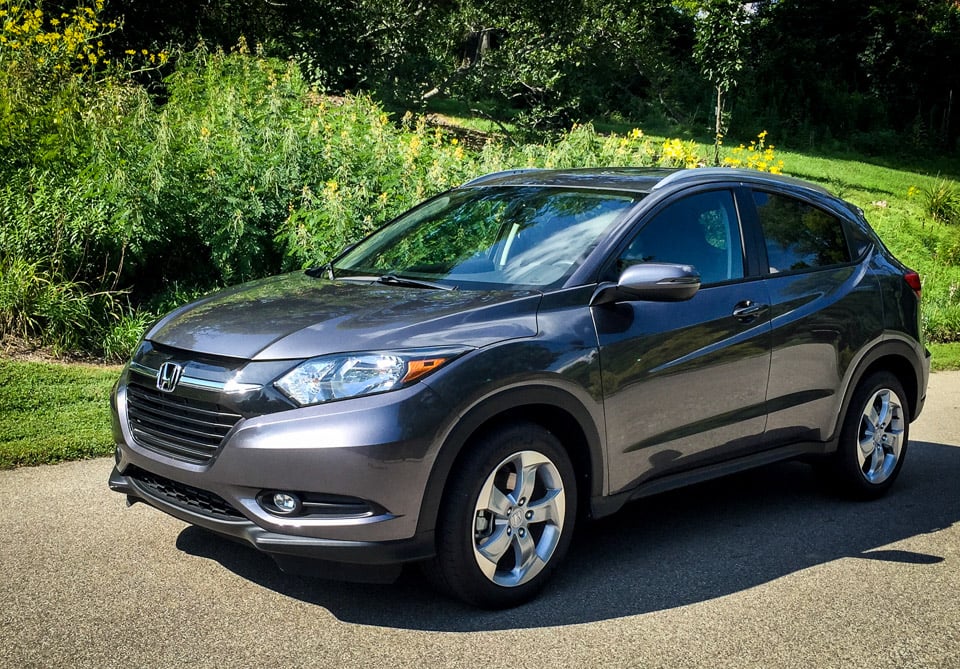 Make no mistake, if it’s thrills and styling you seek, then the HR-V may not be just right, but if it’s comfort and resourcefulness you seek, then lay down in this Baby Bear’s bed. 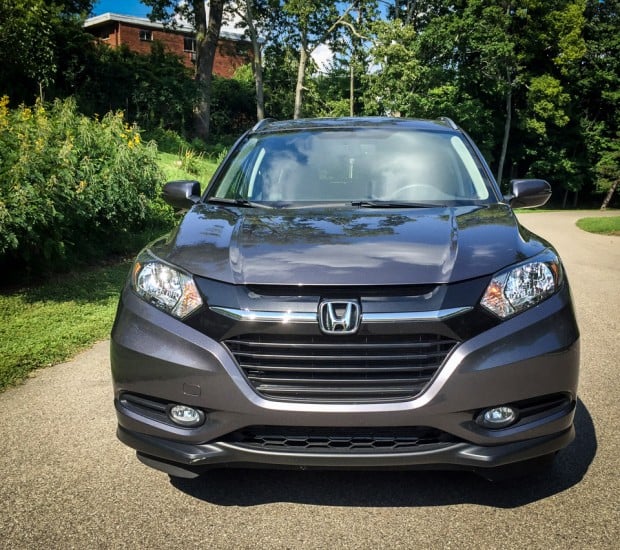 The HR-V is part of the growing segment of subcompact crossovers. I call them bubble crossovers. They’re smaller than crossovers like the CR-V but still have higher road vantage point and have the styling of a SUV. It’s growing niche for sure within the auto industry. I can’t say they’re my favorite type of vehicles, but they’re popular with consumers. While the CR-V is such a solid selling vehicle for Honda, they still went and jumped into to this niche to try to reach buyers who may consider other bubble crossovers like the Buick Encore, Mazda CX-3 or Chevy Trax (those last two being new vehicles for this model year). Honda is a company in tune with their customer base and clearly believes there’s an untapped buyer they’re trying to reach with the HR-V. Styling for the HR-V follows suit with the CR-V. It’s a pretty conservatively designed vehicle. Although I do appreciate the HR-V looks less bubbly than some of its competitors. It’s more elongated, whereas some of these other subcompact CUVs seem to look too bulbous to me. The HR-V is a vehicle that looks better on profile and from the back than from the front. The lack of excitement on the front end, and the plain Jane grille work against the otherwise good looks of the HR-V. The squatty back end looks like it’d inhibit the rear passenger headroom, but it surprisingly does not. 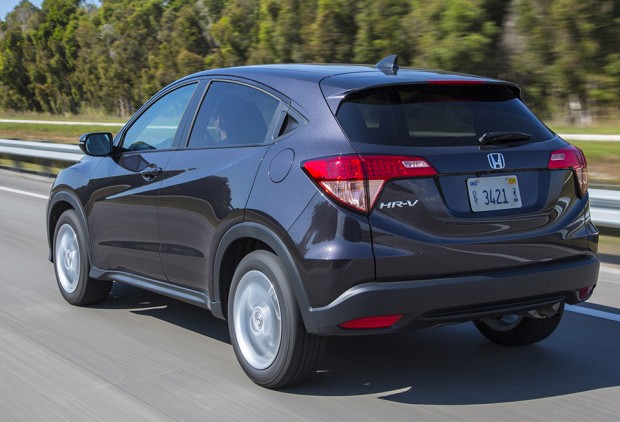 The biggest problem with the HR-V is its less-than-exciting engine. The HR-V is powered by a 1.8-liter four-cylinder engine that produces only 141 horsepower. To compound matters, my tester had the optional continuously variable transmission (CVT) which is clumsy and loud. A six-speed manual transmission is an option for only front-wheel drive HR-Vs, and I’m assuming that transmission has to be better than the CVT.

The HR-V is sluggish off the line and getting up to highway speeds, but then does an adequate job once cruising. It excels in an urban environment where it’s smallish size helps with maneuverability and parking. And in the city at the lower speeds, the underpowered engine is less of a liability.

With the HR-V, Honda has an urban vehicle (much like the Fit) that will appeal to those who need smaller vehicles to maneuver in traffic and tight parking spots. But unlike the Fit, the HR-V gives them more interior room and SUV-like driving characteristics. The higher vantage point (when compared to the Fit), is one of the best selling points of the HR-V. Overall visibility, even in the blind spots, is a major plus for the HR-V.

Inside, the HR-V is a lot like the new Fit. That’s a good comparison, as the Fit is significantly improved when it comes to interior comfort and quality. The HR-V isn’t a luxury vehicle by any means, and there are some harder plastic materials still, but they’re more disguised and less obvious than previous Hondas. 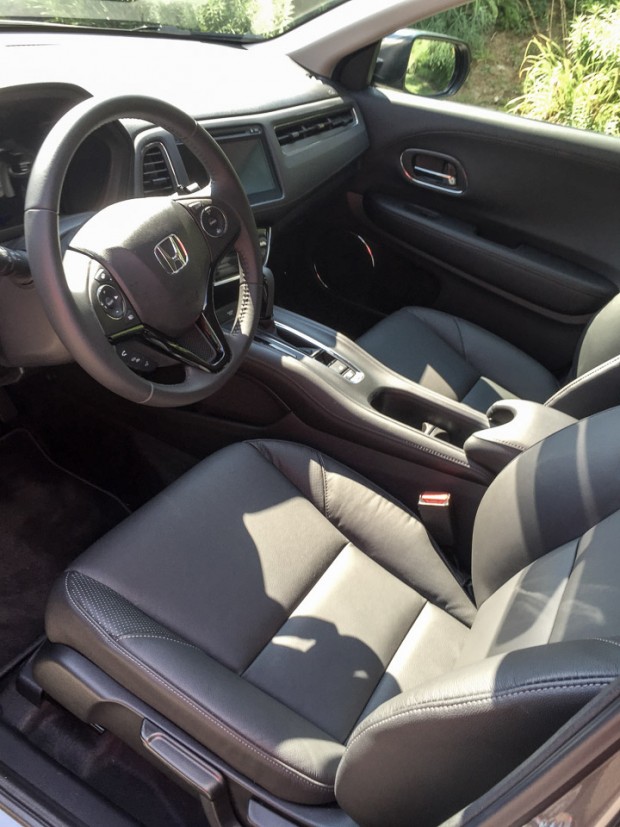 A seven-inch touchscreen drives the infotainment system. The HondaLink smartphone integration system is awkward and doesn’t impress. While the integration with your devices works, it doesn’t seem to do that much that your smartphone doesn’t already do. And spending the time to figure out this technology doesn’t seem to be worth what you end getting. I have an iPhone and mine worked fine with this system, but other reviewers have noted that this system does not work with Android-based devices.

Inside, the best feature is what Honda calls the “magic seat.” The second row seat can be configured a number of handy ways including folding up, sideways or flat. This means it can maximize various cargo needs. The HR-V has a surprising amount of useful space inside, both for rear passenger comfort and for cargo area. There is 24.3 cubic feet of storage space with the rear seats in normal positioning. Fold those seats flat and there’s 58.8 cubic feet of abundant space. The all-wheel drive version of the HR-V has slightly less cargo space so if cargo room is critical, perhaps the front-wheel drive version is the way to go. 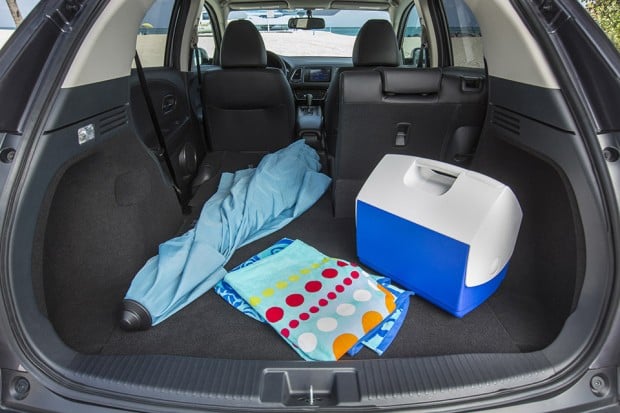 Fuel economy for the HR-V is an impressive 25 mpg/city and 34 mpg/highway for a front-wheel drive model with manual transmission (the way to go if you ask me.) My tester was the all-wheel drive with the CVT and it had an EPA rating of 27 city/32 highway. In a week’s worth of suburban driving, off the highway, I averaged 29 mpg. That’s not as good as a Fit, but is better than a CR-V.

The five-passenger HR-V has three available trims: LX, EX and EX-L. The EX seems to be the “just right” option as it has a sunroof, heated front seats and Honda’s LaneWatch blind-spot tech. The EX-L is by far the most luxurious trim with leather seats, navigation system and roof rails.

Base model HR-Vs can be had for under $20,000, which is another part of the appeal of this crossover. Its attractive pricing makes the crossover available to a consumer base that mostly just had compact cars as options in the past. My fully-loaded tester had an MSRP of $26,720.

The 2016 Honda HR-V is no fairy tale. Urban-dwelling Goldilocks will find this subcompact crossover to be just right in size and cargo space, though I’d like to see a little more power and finesse under the hood.