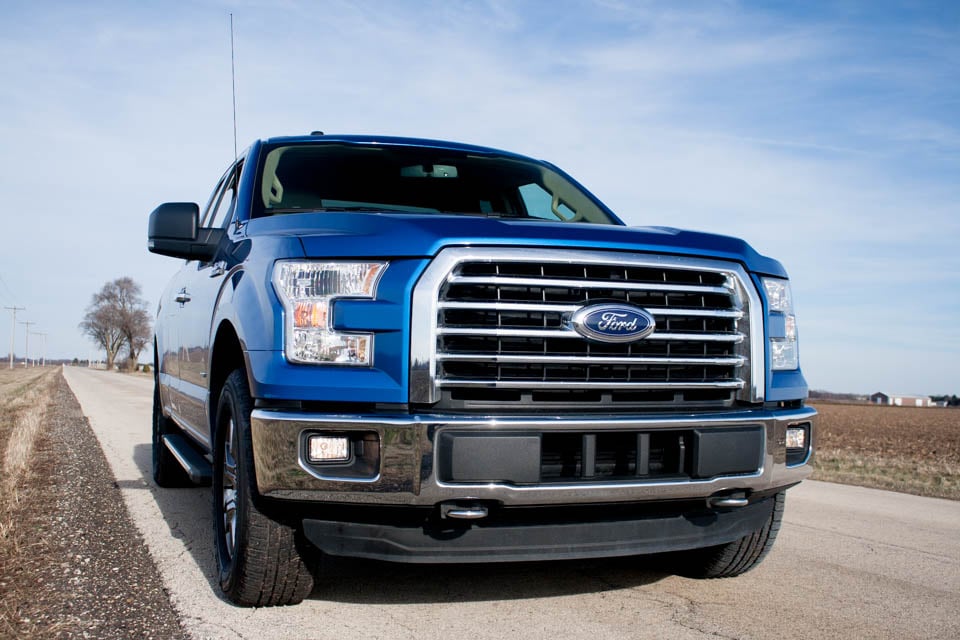 You probably have family members that live in the middle of nowhere. One of those small towns where nothing much happens except for the occasional noise complaint about a garage band in the newspaper’s police blotter. Change doesn’t happen often in these kinds of towns, and typically vehicles in that town are kept long past their due date. Trustworthy, albeit inefficient workhorses. “If it ain’t broke, don’t fix it.”

The F150 Ecoboost is a bit of a culture shock then. Its body is not even made out of good old fashioned steel. It doesn’t even have a V8 engine. And in terms of trucks, the size of the engine is truly microscopic. It’s no wonder that people might be a bit hesitant when looking at the F150 EcoBoost, but I found it to be quite competent in all areas, and then some.

Its body is not even made out of good old fashioned steel. It doesn’t even have a V8 engine. And in terms of trucks, the size of the engine is truly microscopic. 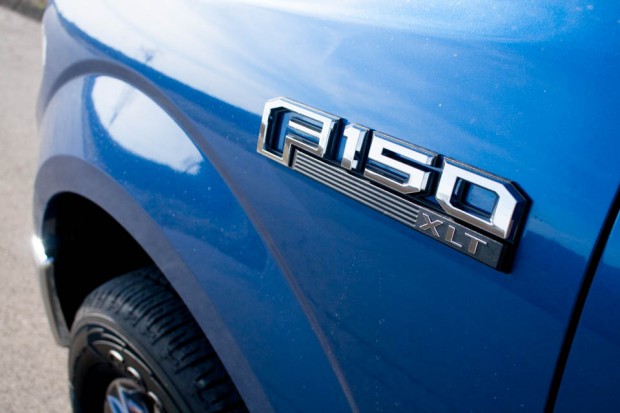 Placing a 2.7 liter V6 under the hood of an F150 seems crazy, daft, and absurd. It’s a headline grabber for sure. Think back even just ten years ago, and the V6 engines offered in trucks this size were truly dreadful. They made more noise than power, kept OPEC in business, and had the refinement of a Gallagher stage act. But this one isn’t from the era of those engineering dark-ages. This one is tiny, for sure, but it is assisted by two turbochargers, resulting in a stout 325 horsepower, and torque elevated well above that at 375. 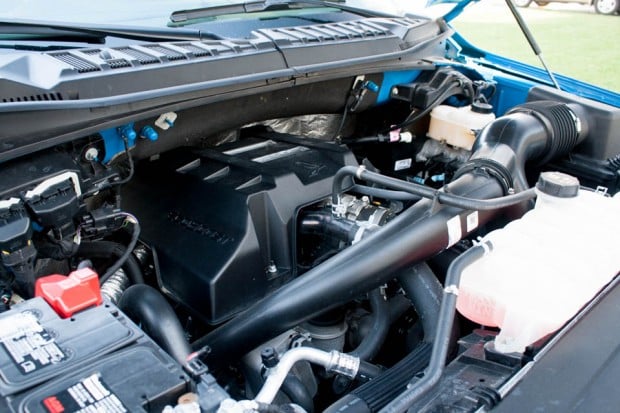 It takes driving this truck in order to actually understand why this makes sense. Though you can still get a big V8 engine, don’t think of the V6 as settling or getting complacent, as it actually proves to be a very good option. 7,500 pounds of towing capacity will be beyond what the average consumer will need, and you’ll see a 15% return on fuel economy compared to the 5.0 V8. Granted, gas prices are down right now, but it’s a foreshadowing of of ever higher prices that’ll reach us sooner than later.

It’s a smooth engine too, low-end torque is one of its strong points and it never really feels out of breath even though you’re acutely aware the higher part of the rev range is out of its sweet-spot. And when you’re not moving forward, an auto engine stop feature saves even more fuel. Over the week long stint I had with the F150, that feature was never annoying. The transmission is a 6-speed unit of the automatic variety and has a tow mode, which I was not able to utilize. It shifts smoothly and smartly, and using the truck in a more gentle way, I was actually able to beat the window sticker’s MPG rating by quite a bit. I observed 23.7 in occasional stop/go main roads, which was a pleasant surprise. 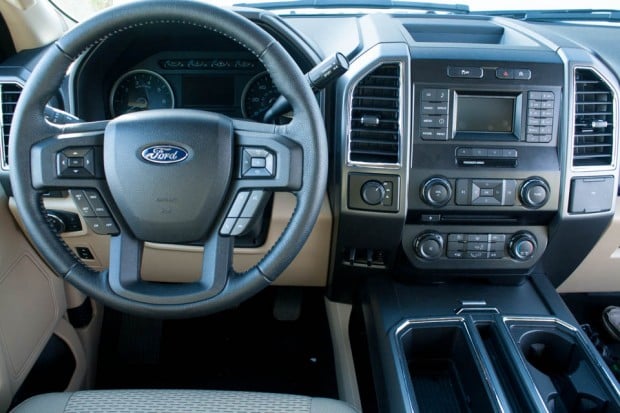 The interior is also a nice place to be, especially for a taller guy like myself. There’s no bench seat in the version I had, but a wide and very useful center console allows places for your coffee, more coffee, your phone, bags of fast food, lap dogs, and purses. Back seat is three abreast as you’d expect, and not lacking on space either. Even further back is the bed, which has the convenient step ladder that pops out from the tailgate. Consider Chevrolet’s solution to accessing the bed is a small foot step in the side of the bumper, and Ram’s solution has yet to be discovered. 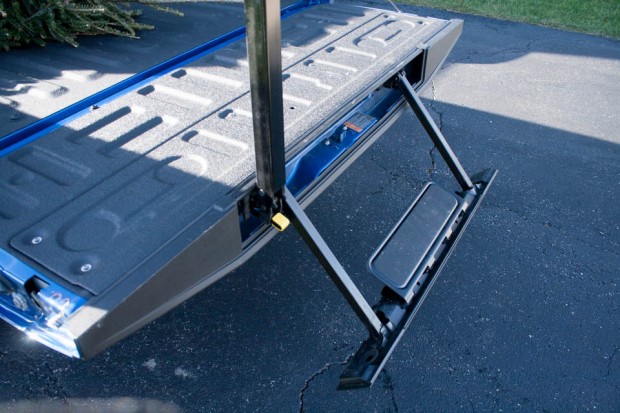 As you can see, it made loading a Christmas tree into the bed quite easy. This was my sad, and only attempt at actually putting the bed to much use. After covering myself in tree sap and the aroma of a Douglas Fir, I came away from the experience impressed with how easy that step ladder is to use.

After covering myself in tree sap and the aroma of a Douglas Fir, I came away from the experience impressed with how easy [the built in] step ladder is to use. 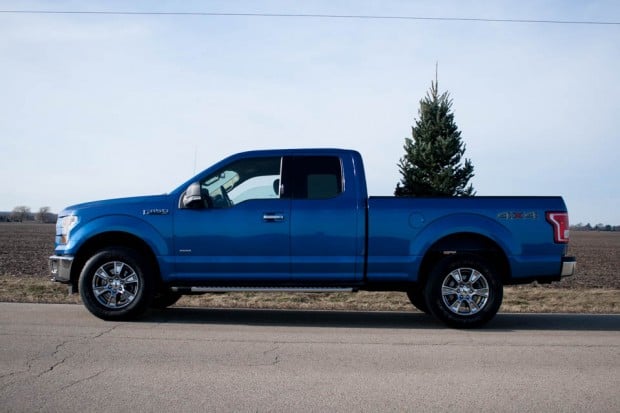 Outside, Ford presented a bit of an overhaul in both sheet metal and material. The most talked about portion of that is of course being aluminum panels and if they have the ability to withstand the abuse of truck stuff. First off, aluminum is not weak. Last I recall, I’ve taken several flights on airplanes made out of it. And the reason why those are made out of aluminum is lightness. It’s lighter than the outgoing model by an impressive seven hundred pounds. That’s impressive on any scale, pardon the pun. It helps the truck use a smaller engine, and be more efficient.

Yes, times are changing, so new approaches to economy and emissions will be the only solution. Other full size trucks will be going this way as well – they have to – to meet ever more stringent emissions standards. You can make an engine more economical, but only so much. Weight savings plays an even bigger dividend. Ford then, is leading the way.