Mazda’s i-ACTIV AWD Smokes the Competition in the Snow 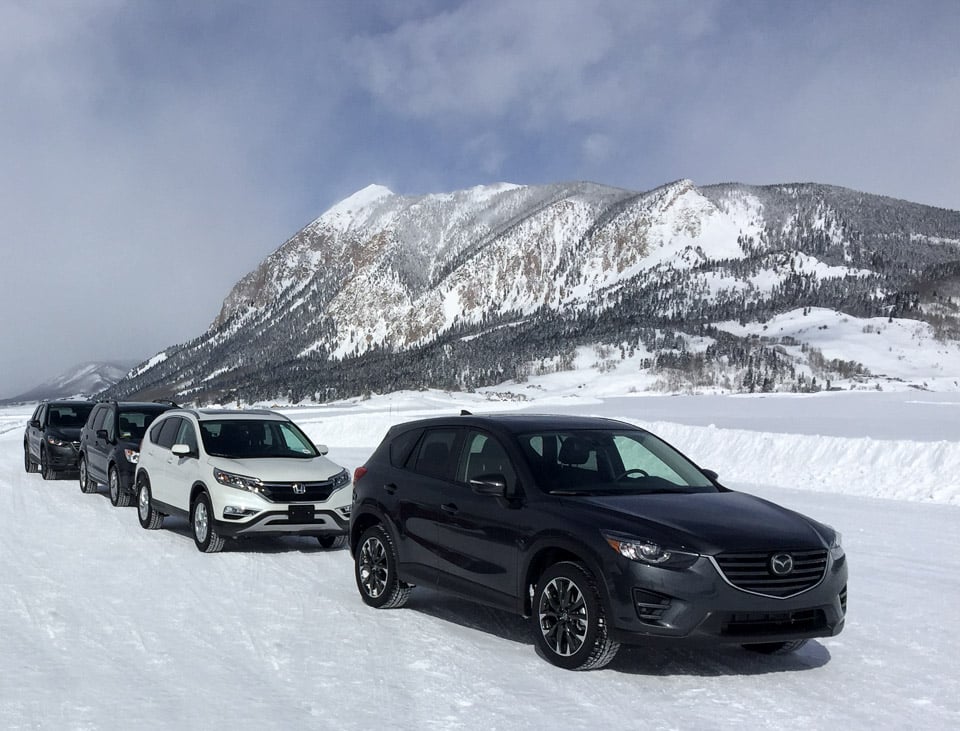 Mazda recently invited me and a number of journalists to the frigid, snow-covered roads of Crested Butte, Colorado to learn how their vehicles handle in extreme weather. While I’d love to talk entirely about the time I spent hooning around the ice in a MX-5 Miata, that was simply icing on the frozen cake. The main purpose of the trip was to find out how well Mazda’s all-wheel drive systems stand up to the competition. 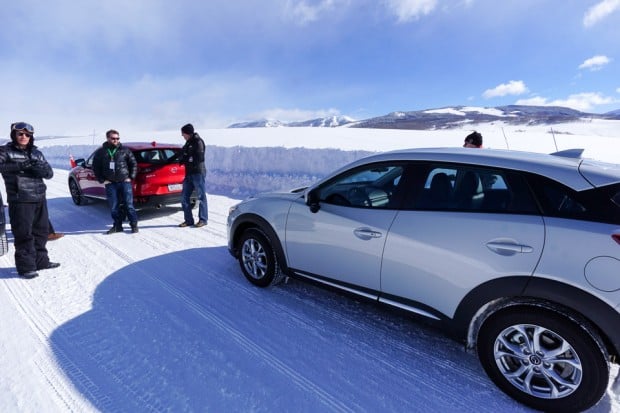 If you’re like me, you probably assumed that the all-wheel drive systems in most SUVs and passenger cars are pretty similar – pretty dumb mechanisms that distribute some power to the rear wheels once the car detects the wheels are losing grip. Well it turns out that not all AWD systems are that simple, and Mazda is leading the pack with some pretty amazing AWD tech these days.

Mazda’s all-wheel secret sauce is packaged under the i-ACTIV brand name. The on-demand AWD system is currently available in both the CX-3 and CX-5, and is coming to the new CX-9 as well. Mazda’s system is special because it doesn’t simply work in a reactive mode like many AWD systems. Instead, it uses a complex set of computer algorithms to predict driving conditions, and adjust torque distribution accordingly. 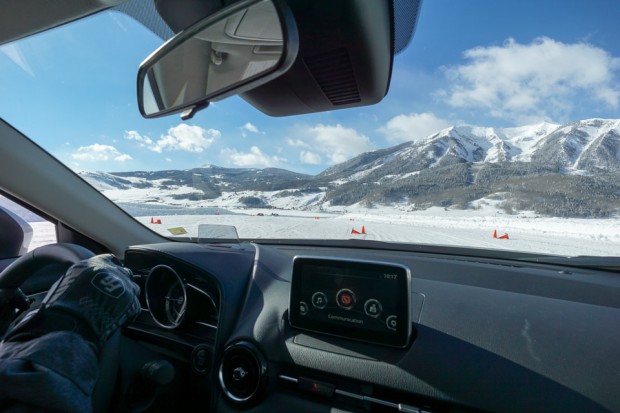 The i-ACTIV system combines inputs from 27 different vehicle sensors and leverages this data to adjust torque transfer more than 200 times a minute. Predictors include things like internal and external temperature, windshield wiper use, steering angle, g forces, throttle input, and more to help figure out where power needs to go on a constant basis. The system is also able to kick in faster than others because it keeps the rear wheels “pre-charged” with a small amount of torque at all times. The combination of sensor tech and physical design ensures a smooth and effortless flow as torque seamlessly transfers from front to rear and back as needed.

To see Mazda’s and its competitors’ systems in action, I was given the opportunity to put several different compact SUVs through their paces on snow- and ice-covered courses that ranged from a series of flat slaloms and turns, to slippery hills, and public roads with a variety of elevation changes. 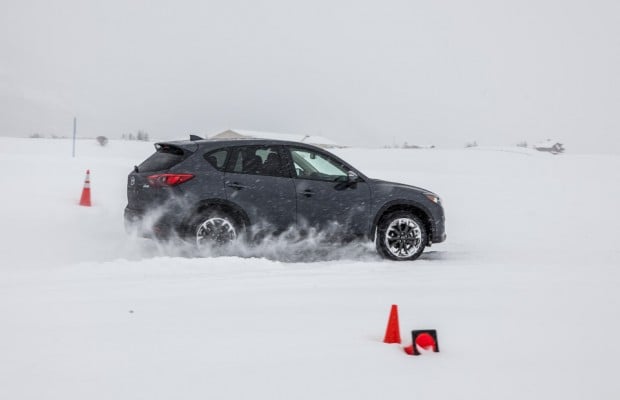 I started out riding in three different Mazda CX-3s: all-wheel drive and front-wheel drive models riding on standard all-season tires, as well an all-wheel drive model on Bridgestone Blizzaks. The FWD with all-seasons was a handful, slipping and sliding quite a bit, and very slow off the starting line as the wheels attempted to gain traction. While the AWD model on all-seasons was definitely less squirrelly in the corners and off the line than the FWD, it was actually a bit slower in braking due to its increased weight. That said, once we upgraded to the AWD CX-3 with Blizzaks, the little SUV handled like a dream, taking every corner with confidence, and stopping in about 1/2 the distance I experienced with any of the other tire or vehicle combinations. What was clear from this (and other demonstrations I’ve seen) is that winter/snow tires are a must if you live anywhere that snow or ice accumulates – especially with hills. All-seasons are fine for the occasional flurry or urban slush, but you’ll want a set of Blizzaks for the fluffy and icy stuff. 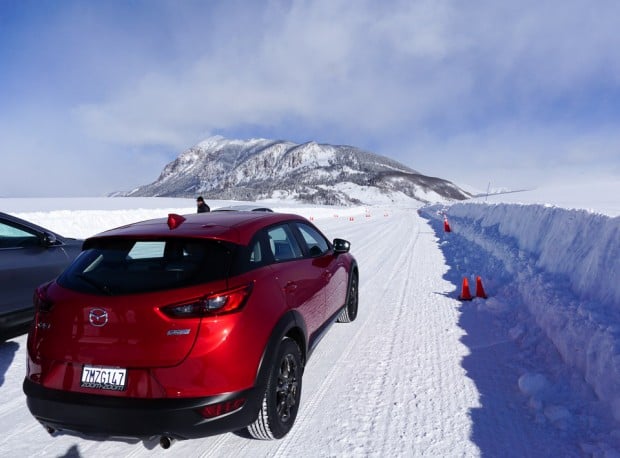 After the flat course, we moved on to a small hill parking challenge. We had the opportunity to drive current-gen AWD models of the Mazda CX-5, Subaru Forester and Honda CR-V, and park them on a snowy hill. We were then asked to turn the wheel and pull out and over the hill. The most dramatic example of the advantages of Mazda’s AWD tech came in this task. 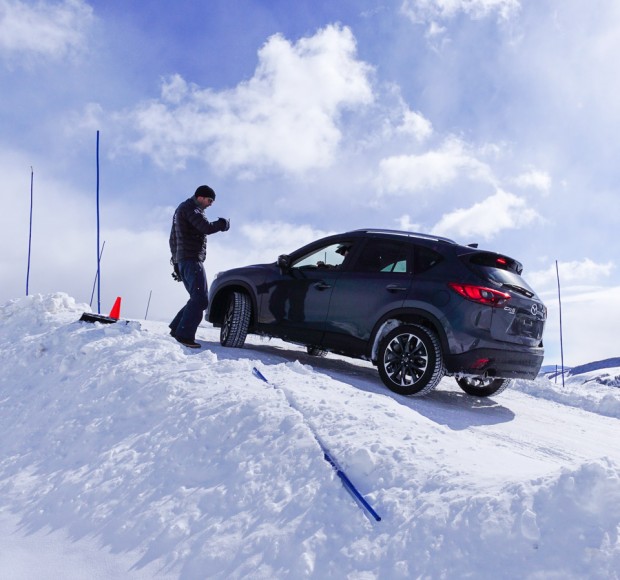 You’d think all three of these popular compact SUVs would handle this simple challenge with aplomb, but it seems as if the Mazda AWD system was the only one of the bunch smart enough to keep power flowing to the rear wheels in this specific situation. Don’t believe me? Check out video footage of the comparison:

The Mazda worked without a hitch on every attempt I saw during my visit, while the Subaru failed on every attempt. The Honda was highly inconsistent, sometimes getting the rear wheels going, but more often than not disengaging just as they got going for fear of overheating the clutch that connects to the rear wheels. The Mazda didn’t flinch once. 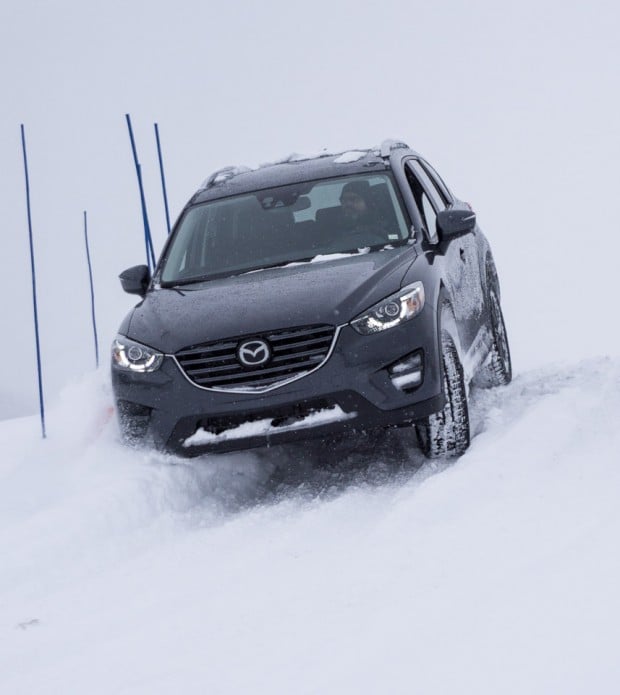 Sure, this is just one situation, but it’s a fairly common one, and one that drivers living on hills and on long driveways face on a regular basis during the winter. That said, the real proof in the pudding is how the Mazda handles in real world situations. Taking a one of the SUVs out on real snow-covered roads, with twists, turns and elevation changes would be the best test. I drove the same snowy route in a CX-5, a Honda CR-V, a Toyota RAV4, and a Subaru Forester, all riding on the exact same Blizzak tires. 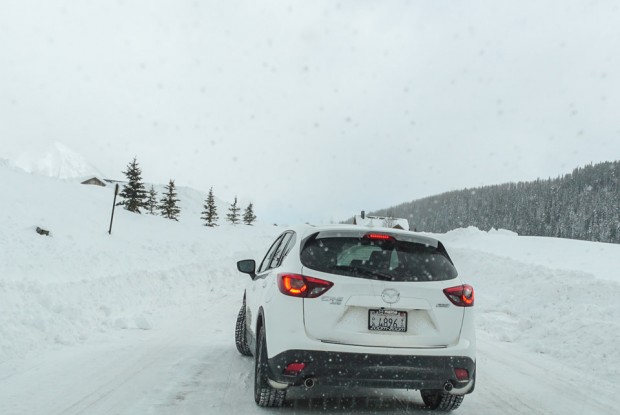 All of the cars made it through the circuit without getting stuck, but the CX-5 felt the most natural and seamless through the drive, and its traction control system never felt like it was fighting against me. On the other hand, both the Honda and Subaru seemed much more wont to take charge at the first sign of slippage, which felt unnatural and unsatisfying as a driver. The RAV4 was the only other one of the bunch that I felt some sense of driving engagement with, but the Mazda is just a better looking and more nicely equipped car if you ask me. 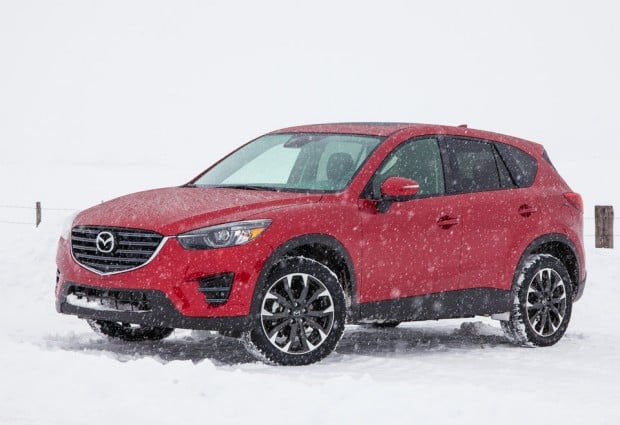 Mazda’s philosophy of making drivers feel one with machine comes through strongly in all of its recent vehicles, and its AWD systems use some pretty novel tech to provide a great balance between driving engagement, safety and confidence in harsh driving conditions. Now that I’ve seen what these cars can do in the snow and ice, I’d love to see how they perform in mud, sand, and gravel.