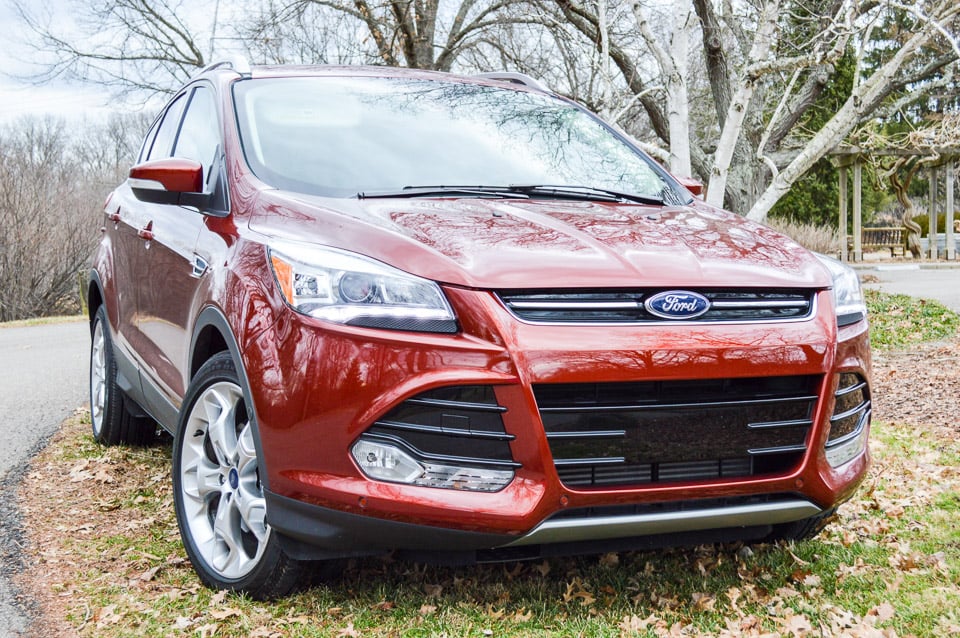 The compact crossover segment is one of the most compelling, and increasingly competitive ones in the auto industry. Every carmaker has an offering. And each has some sort of merit and value. As these crossovers battle one another, they need to find their place in the segment that makes them distinctive. My tester this week was the 2016 Ford Escape, which is not a new entry in this segment. The Escape has been around since 2000 and is at the end of its third generation. It was ahead of the trend back in the day, but now finds itself with a lot of competition, and thus Ford is always striving to find ways to improve and update this crossover. In fact, the Escape will get a substantial facelift in 2017. 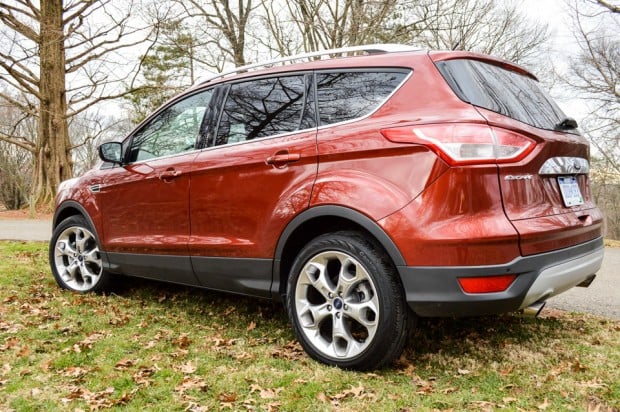 For 2016, there are some minor changes, and one significant one. Ford has replaced the much-maligned MyFord Touch system with a drastically different Sync 3 system. (more on this later)

The Escape is a handsome enough crossover, but seems to show its age and need for an upgrade. It’s like two vehicles in one. The front end is modern and distinctive, while the back end feels quite dated. And the lack of LED lights diminishes from the overall appearance and competitiveness of the Escape. The grille is simple but nice and flows well with the somewhat flashy hood. The same flashy styling flows along the side, giving the Escape a nice profile. However, all styling seems to diminish on the back end, where a sloping C-pillar and bland back end detract from an otherwise nice-looking vehicle. 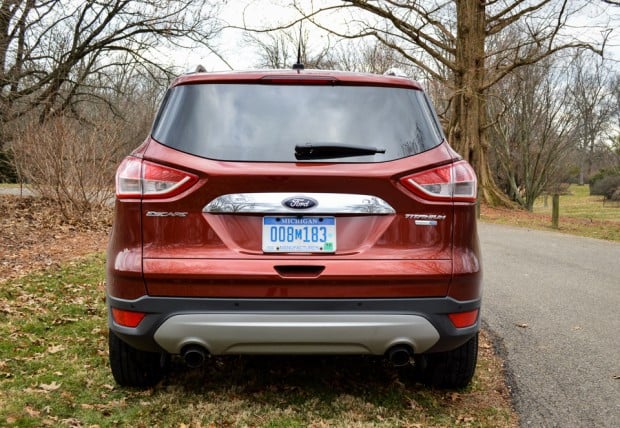 There are three engine options for the 2016 Escape, two of which have EcoBoost (i.e. turbos). The naturally-aspirated 2.5-liter engine is the biggest, and yet least powerful. It seems puzzling why this would be an option most consumers would consider as it’s both less fuel efficient and less powerful than the other two. It makes only 168 horsepower and seems quite uninspiring.

Inspiration can be found however in the 2.0-liter turbocharged 4-cylinder engine. It makes 240 horsepower. It’s the peppiest of the three engines. There is also a more fuel-efficient 1.6-liter turbocharged four-cylinder engine that manages to squeak out 178 horses (better than the bigger 2.5-liter engine). We drove the 2.0-liter version and it was outstanding. In a segment of bland driving crossovers, this one offers excitement. This engine is only available on the SE and Titanium trims. All-wheel drive and front-wheel drive options are available, and a six-speed automatic transmission is standard across all powertrains. The transmission is adequate, but there was some turbo lag during quicker acceleration.

On a snowy day, my tester with all-wheel drive, was a confident performer. In the Midwest, AWD is the preferred option for the Escape and the fuel economy difference is negligible. 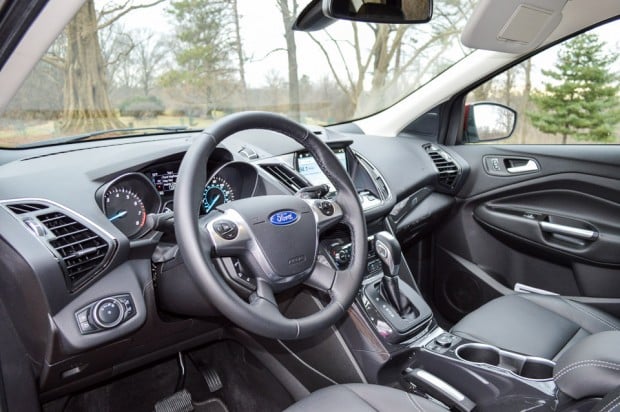 The interior is where the Escape is already ahead of many in the segment. With hard plastic materials and cramped passenger room being so pervasive in the compact crossover segment, the Escape truly is an escape from the norm. Soft touch points can be found throughout. The seats are plush and even the back seat offers ample legroom and headroom. Although, with the slope of the C-pillar, headroom for really tall rear passengers may be a little cramped. The rear seats do recline for extra space.

Compact crossovers continue to gain in popularity due to their blend of size and maneuverability. They drive like cars, but offer SUV versatility. The Escape can certainly, and appropriately, be called right-sized. It’s ideal for urban dwellers, but also great for suburbanites with longer commutes.

In terms of cargo capacity, there is 34.3 cubic feet of space behind the second row. This is average for the segment. A neighbor asked me if golf clubs would fit horizontally in the back, and I tested that. A standard size bag of golf clubs does not seem to fit across the back, and that was a little surprising. Accessing the rear gate is easy, as long as you have the key fob on your person. Swing your foot under the rear bumper and the rear gate opens wide, making for convenient, hands-free access. 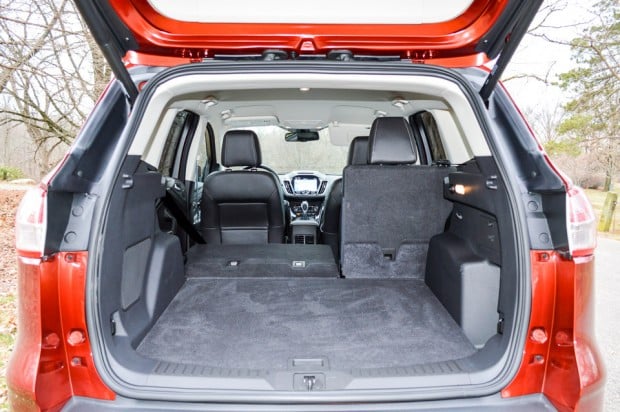 As mentioned, one of the most significant upgrades to this model year is the introduction of the Sync 3 system. The presentation alone of this infotainment system is so starkly different that it is noteworthy. The display is vibrant, clean, and totally different than anything Ford has offered previously. It’s an intuitive system that now actually responds well to voice commands. The biggest knock on the MyFord Touch system was the lag time and lack of voice command clarity. That is no longer a problem with the Sync 3 system. It will be very interesting to see how this system evolves through the years with Ford. I believe they’re on the right track now. 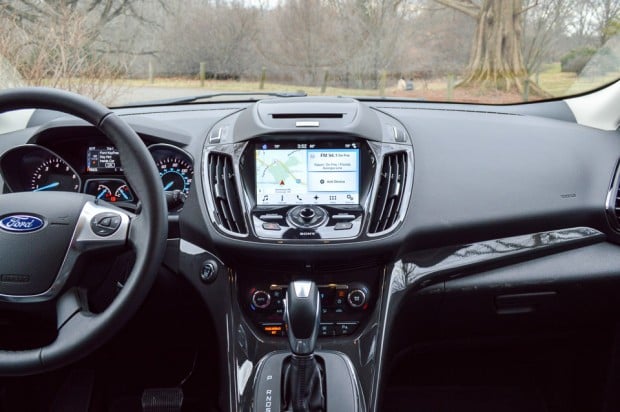 There are three trim options for the 2016 Ford Escape – the base S, the middle tier SE and the top-of-the-line Titanium. Our tester was the Titanium, loaded up with extras. The Titanium has a base price of $27,400(USD). With some extras like a navigation system, alloy wheels, and a special grille, my tester had a final price of $32,475. Some of the more bare-boned Escapes can be had for significantly less, with prices in the lower $20s.

Ford has mastered its EcoBoost technology (maximizing power and fuel economy with turbos) and the end result is fun-to-drive vehicles that still have good fuel economy numbers. This is certainly applicable to the 2016 Escape.

The 1.8-liter engine goes over 30 mpg on the highway with its EPA rating. My tester, with the AWD option, had an EPA rating of 21 mpg/city and 28 mpg/highway. I got into the turbo a lot, and also encountered some snow-covered suburban roads, so my fuel economy average was just under 26 mpg. Considering how much pep this vehicle had, I was more than satisfied with that kind of fuel economy. 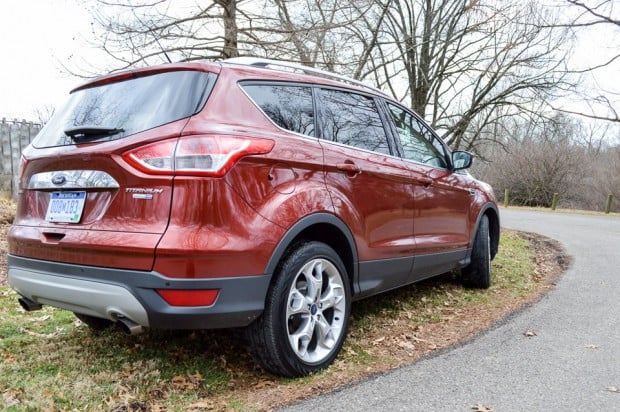 We can’t look too much ahead to the 2017 Escape, otherwise, we will overlook a viable, peppy, and quality compact crossover this model year. The 2016 Ford Escape is a right-sized vehicle that blends in well within a tough segment, and is perfectly suited to both urban and suburban environments.