The Ghia That Didn’t Win Back Rita Hayworth’s Heart

Love stinks. Especially when you get your ex a custom built Cadillac Ghia, she keeps the car but doesn’t get back together with you. Playboy prince Aly Khan endured such a fate in the 1950s, when he tried to win back the love of movie star Rita Hayworth by purchasing one of two custom Cadillacs constructed by Italian coachbuilder Ghia.

In the Fifties, Ghia got into the business of building concepts for automakers such as Ford, Volkswagen and Chrysler. For the 1953 Paris Auto Salon, Ghia built two concepts based on a Cadillac chassis. Khan saw the cars, and with his marriage to Hayworth on the rocks, thought he could drive her back into his arms with a lavish gift of the 1953 Cadillac Series 62 Coupe by Ghia. His ploy failed, and Hayworth divorced Khan–then one of the richest men in the world–but she kept the Ghia, perhaps figuring his pocketbook could survive the blow.

Now owned by the Petersen Museum in Los Angeles, the Ghia sports a 210-horsepower V8, with distinctive styling including a wrap-around rear window and quad headlamps. Painted in an appliance white when Hayworth owned it, the Ghia has since been repainted burgundy to better reflect its unique contours. Like its erstwhile owner, the Ghia also scored screen time as one of billionaire Tony Stark’s stable of vehicles in the movie, Iron Man. 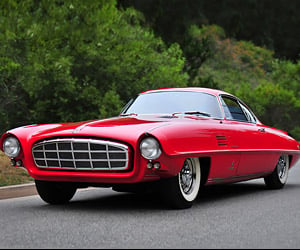