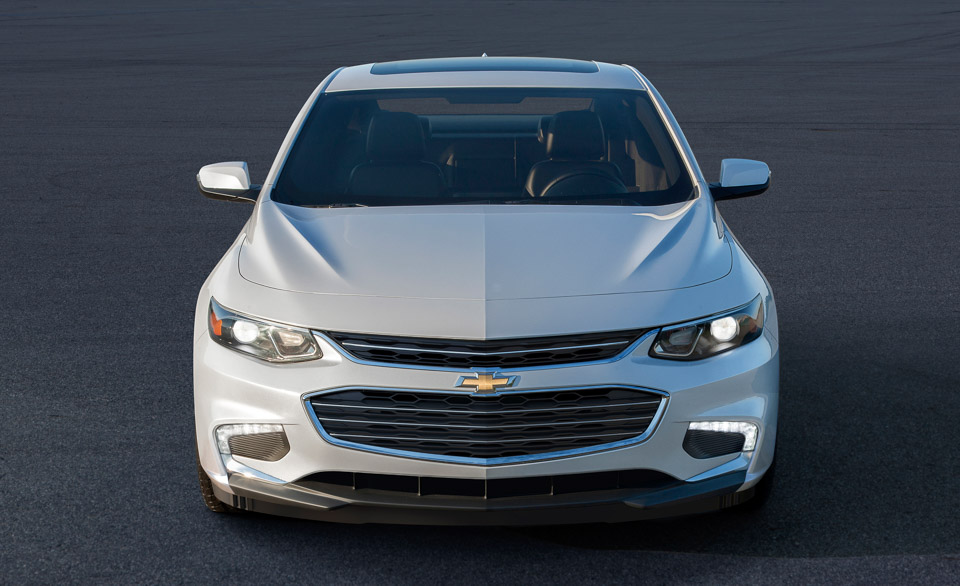 I’ll be honest, I wasn’t sure initially if my tester this week would be appropriate for 95Octane, whose motto is Cars That Don’t Suck. In the past, the Chevrolet Malibu has been less than exciting. I won’t go so far as to say it sucked, but the Malibu has a history of mediocrity. Let’s leave it at that.

However, for the 2016 model year, the Chevy Malibu is the opposite of suck. In fact, it totally belongs here at 95Octane because it’s stunning, fun to drive, and has a great interior. It’s no wonder the 2016 Chevy Malibu was one of the three finalists for North American Car of the Year. I don’t vote in that contest, but if I had a vote, it would’ve gone to Malibu. It’s that good folks! 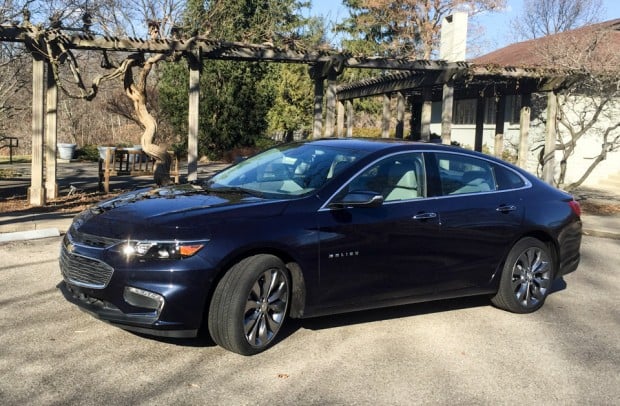 For this model year, the Malibu is completely redesigned. It’s such a drastic redesign that you can barely identify it on the street. It has German-looking features (and that’s a compliment). Within the ultra competitive (and ultra conservative) midsize segment, the Malibu now stands out from the crowd. 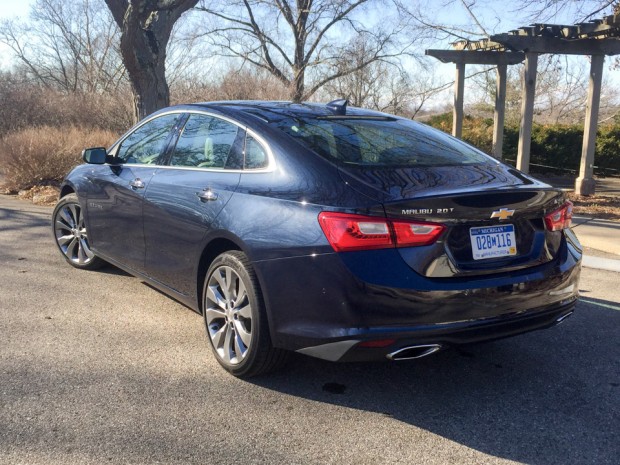 The Malibu’s exterior is a lot more aggressive looking. It still proudly displays that Chevy bowtie on its right-sized grille, but that bowtie badge is now flanked by LED head lamps. The side panels have creases that really add an aerodynamic flow and modern flare to the Malibu’s profile. The overall design of the Malibu is aggressive, but timeless. It’s not overly muscular, but if you squint your eyes or see it at a passing glance you’ll mistake it for an Audi or BMW (honestly, you will!). The 2016 Malibu is easily the best-looking family sedan on the road today.

In addition to being significantly better looking, the Malibu is now lighter. It weighs 300 pounds less than its previous generation but has a longer wheelbase (four inches longer to be exact). This alters how the Malibu drives, in a good way. The last version of the Malibu was stale, firm and unresponsive. Now the new Malibu is nimbler, more aggressive and responds better to the driver. 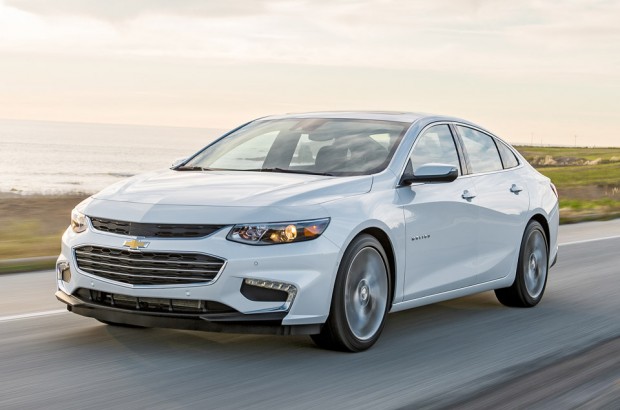 There are two standard engines for the Malibu, both of which are four-cylinder engines. A 1.5-liter is standard and is less inspiring than the 2.0-liter turbocharged one that I drove. The smaller engine only makes 160 horsepower and is more what Malibu owners are used to. However, the turbocharged 2.0-liter makes 250 horsepower, which is slightly less than the output of last year’s model.

But due to the change in the wheelbase, the entire engine performance is completely different. If you’ve been unimpressed with a Malibu in the past, try the 2016 version and see how responsive and agile it is. There is no noticeable drop in power and no turbo lag either. This is thanks in part to the new eight-speed transmission. Unfortunately, this superior eight-speed transmission is only available on the top trims of the Malibu and instead a six-speed automatic is left for the base trims. Not fair!

As impressive as the new exterior is, the interior may be even more impressive. The Malibu’s interior looks and feels more like a Buick than a Chevy. The modern interior on my tester which was the higher level 2LZ trim, lacked any hard plastic anywhere. 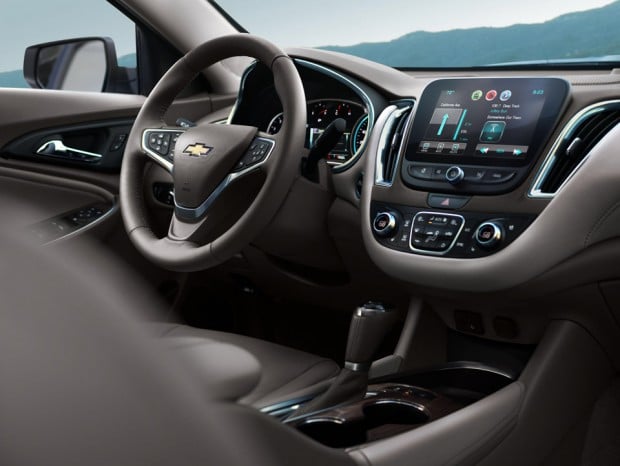 The seat surfaces are plush and soft. Front passengers will enjoy adjustable seats and the driver will get a nice, comfortable driving angle and vantage point of the road, as well as a good angle to operate the infotainment system on the center stack. Rear passengers will enjoy a bigger backseat, thanks to the aforementioned increased wheelbase. Two adults and one child will fit comfortably and happily in the back seat.

The Malibu is chock full of technology, including a 4G Wi-Fi hotspot. This is standard for most GM vehicles these days. Additionally, there’s an eight-inch touchscreen that Chevy’s infotainment system runs through. It’s an intuitive system that doesn’t overwhelm you with too many knobs or buttons. It’s all part of a clean, organized and angled just right center stack. It also offers Apple’s CarPlay which integrates neatly with smartphones. Thanks to two additional USB ports, passengers can enjoy charging their devices while using the Wi-Fi network.

Undoubtedly you’ve seen the advertising on the Malibu touting their teen driving technology. Exclusive for the Malibu, the Teen Driver program creates a driving report card for parents of how their young driver performed. Using a passcode that only they know, parents can find out how often a certain speed was exceeded, when lane departure sensors kicked in (swerving) and when the sensor-based collision warning system engaged. Also, upon startup, the audio system is disabled until all passengers engage their seat belts. Some of my passengers found this to be annoying, but as a parent of a soon-to-be new driver, I think it’s fantastic how Chevy is using the available technology to force people to be safe. 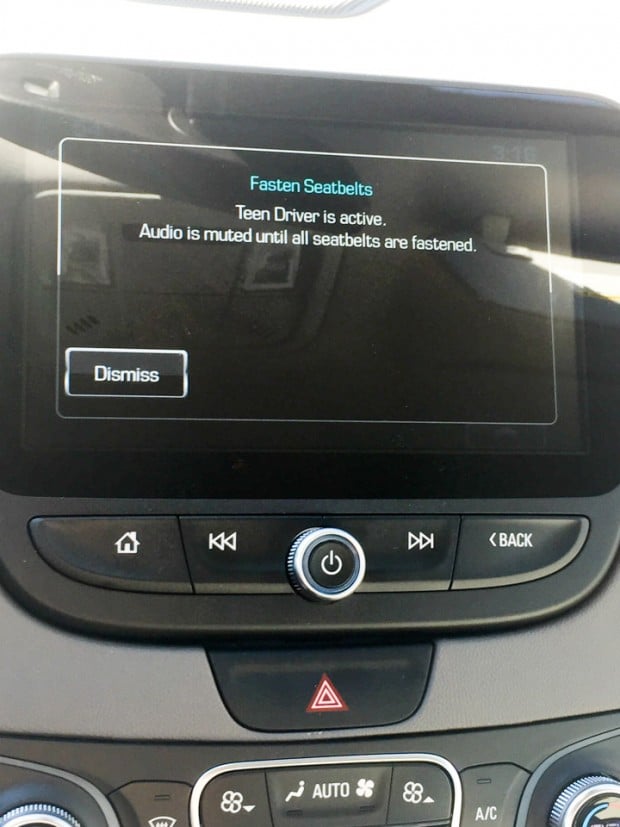 And I love that the Teen Driver report, which basically functions as a big tattle tale. With car crashes being the number one killer of teenagers, I’m okay with this and I applaud Chevy for putting it in a family-oriented sedan like the Malibu. I do wish this feature was standard for all trims, but because it requires special sensor technology (Chevy’s Driver Confidence package), it is only available on the LS, LT, hybrid and Premier models. 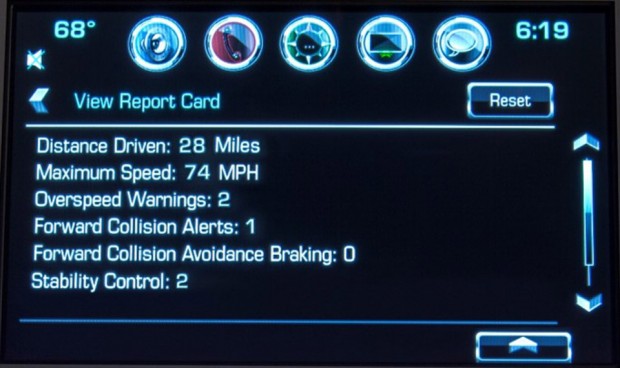 There are four trim levels for the Malibu. My tester was the top-of-the-line 2LZ trim which certainly teeters on the line of luxury. Think Buick meets Audi and that’s where the Malibu 2LZ resides (somewhere in the middle). The 2LZ is full of amenities including adaptive cruise control, park assist, blind spot monitors and leather interior. Base price for the 2LZ Malibu is $30,920, with the extra packages my tester had a final MSRP of $34,285. That’s approaching Buick pricing too. Although the base price for the lowest trimmed Malibu is only $22,000. There’s a huge price gap depending on how nice you want your Malibu to be. 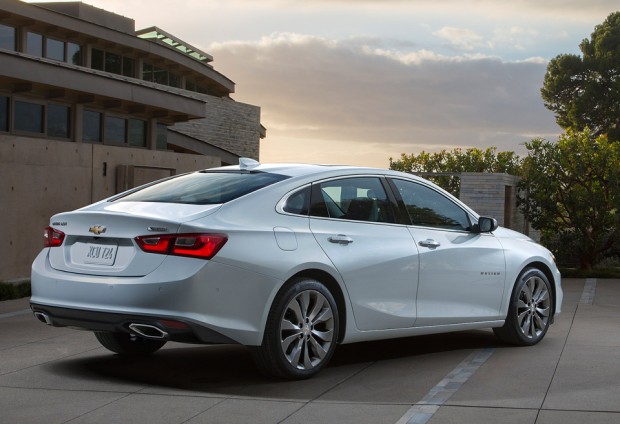 The Malibu has a fuel economy rating of 22 mpg/city and 32 mpg/highway. I averaged 27 mpg during my week with the Malibu. I drove it both on the highway and throughout my neighborhood streets, so the 27 average is probably a good indicator for what the average can expect. There’s a hybrid Malibu that will be available that promises significantly better fuel economy.

Few vehicles today have gone through a more drastic betterment than the Chevy Malibu. It’s such an important segment for Chevy, and now they have a car that not only competes, but has raised the bar significantly.