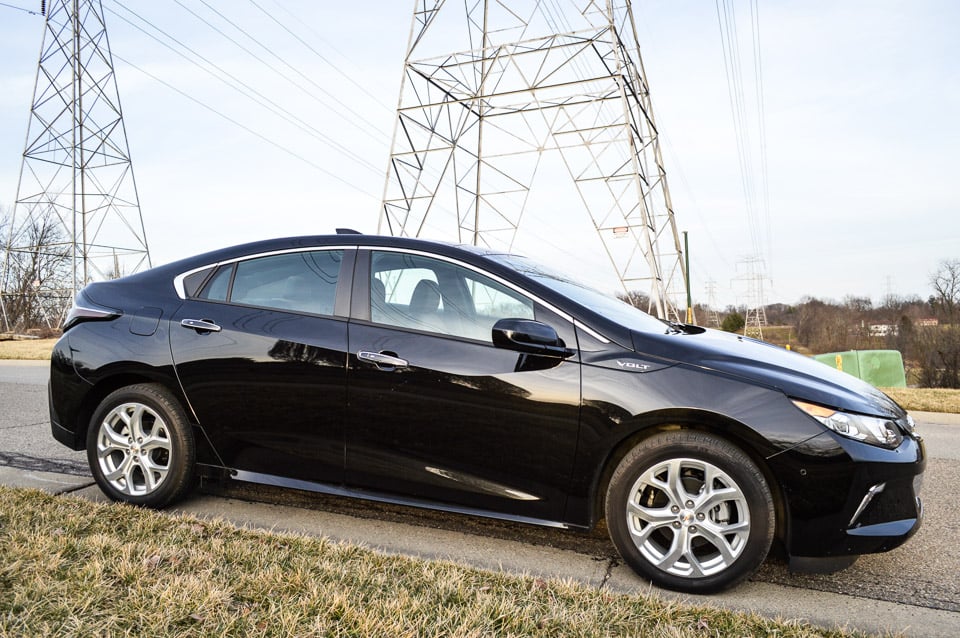 In general, sales numbers drive the auto industry. But sometimes, there’s an exception to that rule. Enter my tester this week – the 2016 Chevy Volt. Sales of the Chevy Volt are less than brisk, although they did sell the 100,000th Volt this past October (but that’s over its first five years). It clearly can’t rival the sales of the Toyota Prius, but General Motors isn’t giving up on the Volt either.

For model year 2016, the Volt enters its second generation. Giving this plug-in hybrid new life and a new opportunity to make its mark in the segment. Prius sales are down, but so are gas prices. So is there an opportunity there for the Volt to take some market share? Absolutely. And if going by looks and styling alone, the Volt is significantly better than the Prius.

So kudos to GM for believing in the Volt enough to push this vehicle to a much needed upgrade and making it a significantly better car in its second generation. The Volt is one of the most cutting-edge vehicles in the GM family, so it should get the push it deserves.

For starters, Volt 2.0 has much better looks. It looks less like what you’d expect from a hybrid and more like a sporty sedan. This is something Toyota could learn with the Prius, which has never been able to shake its funky, “eco” looks. Frankly, I find it insulting and ridiculous that car makers find the need to make electric vehicles and hybrids look different from their gas-drinking counterparts. 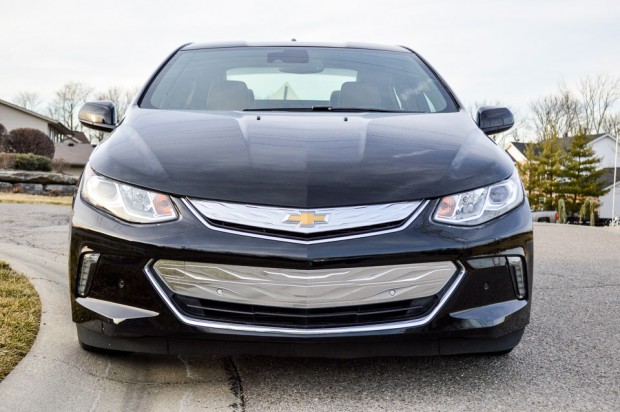 The 2016 Volt has a sleek new appearance. The grille is beaked, reminiscent of newer Acuras, and there’s a solid metal grille that hints at its electric engine ability. Squinty new head lights flank the redesigned grille. Overall, the Volt blends well into the Chevy family. There’s now a resemblance between Malibu and Volt, when before Volt was the car that didn’t seem to quite fit into the bowtie family.

Based on the looks alone, this second incarnation of the Volt could be the one that future Volts will be compared to. That is how drastically better the new design is if you ask me. The styling is modern, and is exemplary, especially on the back end, where the sleekness continues. Lift the hatch, and there’s 10.6 cubic feet of space. Obviously that’s small, but is pretty good for all the room needed for battery packs.

Let’s be honest, most plug-in hybrids and most hybrids in general, are not very exciting to drive. They putter along at higher speeds and are sometimes downright scary to try to merge on a highway. Not to mention the range anxiety that exists for strictly electric vehicles. That’s why the Volt is the best of all worlds. 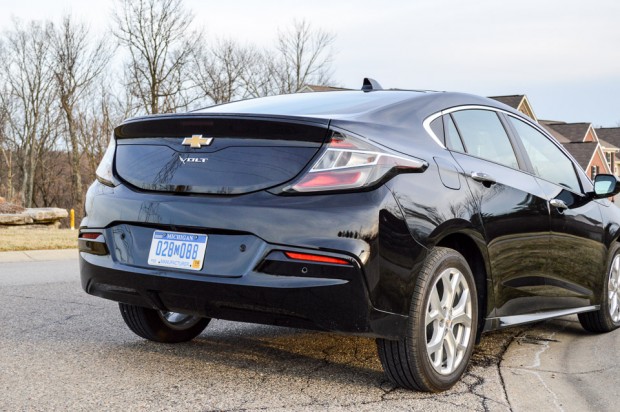 Because the Volt has electric motors and a 1.5-liter gasoline engine, there’s no range anxiety. With a new powertrain this model year, there’s better fuel economy and regenerative technology. The combined power system makes 149 horsepower. The improvement in the electric system, as well as a substantial drop in weight takes the all-electric range from 35 miles (in the previous generation) to 53 miles now.

Another fantastic plug-in hybrid vehicle in the GM family was the Cadillac ELR. This was my favorite hybrid vehicle, but sadly GM won’t give the ELR a second generation. However, Chevy put one of the ELR’s coolest features in the 2016 Volt. Regen on Demand rewards careful driving practices, and efficient braking by boosting the electric range through regenerative braking. Without having to plug in, you can see minor increases in the electric range by braking efficiently. This also makes you a better driver and is a super-cool feature that the previous Volt didn’t have. 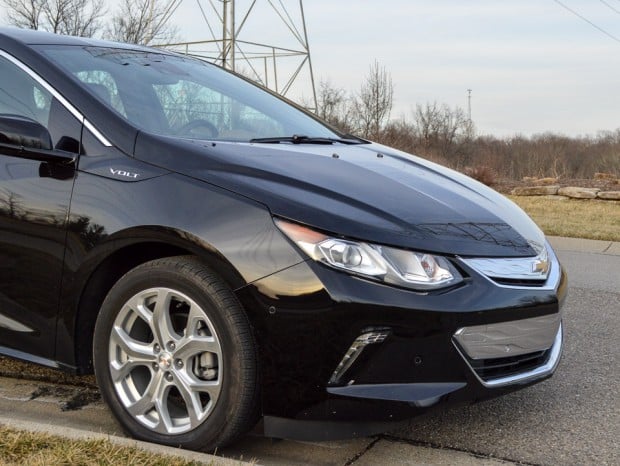 Recharging the Volt’s electric motor is as easy as it was before. It works with any standard 120-volt or a Level-2 240-volt outlet. Unfortunately, the 120-volt charging isn’t exactly fast. In my garage, I plugged the Volt into a regular household outlet and left it for 12 hours. I was disappointed to see that only 29 miles of charge had been added to the electric system, no where close to the 53 miles it alleges to get. This is why I’d love to see a faster charging system for the Volt, similar to what Tesla offers with its Supercharger stations. Sure the Volt has the gasoline engine to back you up (unlike Tesla), but the point of the Volt is to save fuel through electric, gas-free driving, and I found that quite underwhelming and no better than the first generation Volt.

In ideal driving circumstances, and if you could charge up quicker, you could theoretically get more than 100 mpg from the Volt. But, in a week’s worth of driving, I found myself running on the gasoline engine far too often, and only averaged about 52 mpg. That number seems big, but was pretty disappointing given the promise of electric driving. I also did not do a great job of maximizing the regenerative braking. It showed me I need to drive it more efficiently in order to reap the rewards. 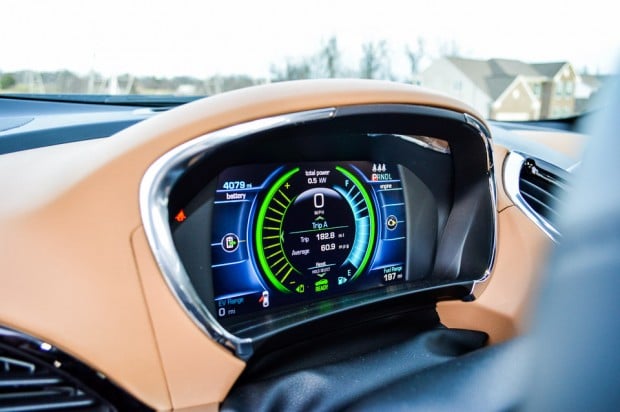 One thing that is in the Volt’s favor is that, unlike some of its rivals (cough cough Prius) it’s actually enjoyable to drive. It doesn’t drive like a hybrid, and that’s a good thing. There is power when you need it. Merging on the highway is easy. It’s not a speed demon off the line, but it’s not pokey either. In electric mode, it’s whisper quiet, which makes for an enjoyable in the cabin. Even running on the gasoline engine, it’s not very loud.

As improved as the Volt is on the outside, the inside is just as drastically improved. The most significant improvement is in the back seat where a spot for a fifth passenger now exists. The first-gen Volt was only a four-passenger vehicle, while this new Volt boasts five-passenger seating. However, that fifth seat is not really meant for adults as the back seat is still small and shoulder room and leg room is at a premium. 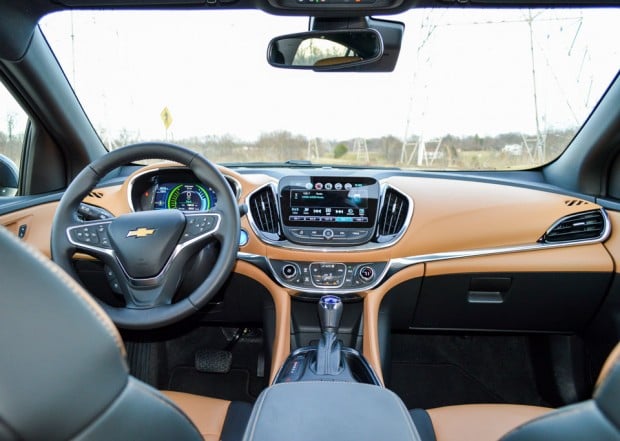 Overall materials are much better quality now. Soft materials permeate the dashboard and the side door panels. This is markedly better than the hard plastic and weird “I’m a hybrid” layout of the previous Volt. I was disappointed in the lack of power adjustable seats though. For a vehicle with a price tag north of $30K, I expect to not have to pull my own seat up and back or hand crank it up or down.

The Chevy MyLink system is used as the infotainment system. It’s one of the easiest to use systems out there. It’s intuitive and easily communicates with smartphones. GM added a built-in 4G LTE Wi-Fi hotspot to this Volt as well. 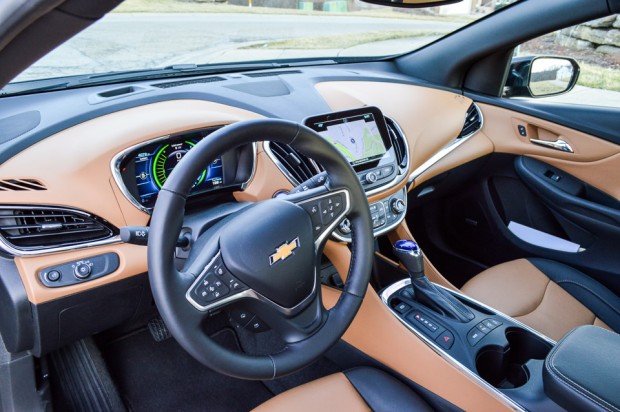 There are two trim levels for the Volt – the LT and the Premier. My tester was the Premier which does have heated seats and a park assist feature. If there’s still one major problem with this tech-heavy vehicle, it’s that the price point is high; too high in fact for a small hatchback. MSRP of the Volt Premier is $37,520. My tester had a few extra options including blind spot monitors, lane departure warning and cross traffic alert. All told, my tester had a final price of $39,850. Keep in mind, there are still substantial tax incentives available from the federal government and most states which can offset your costs by several thousand dollars, but initial ownership costs for an EV are still high. 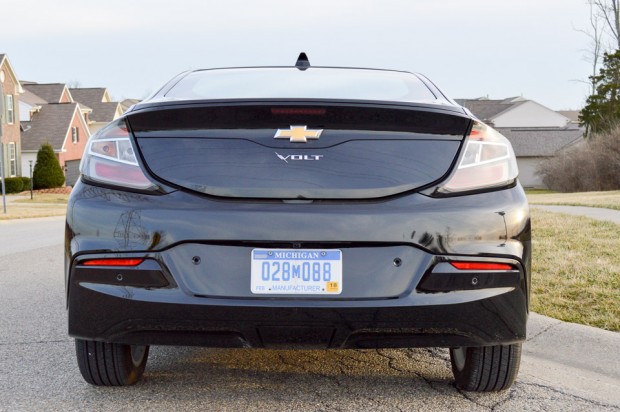 As cool as the Volt is, and as much as it can save you at the pump, I think price is the main reason it isn’t selling as well as the Prius. Because in all other regard, the Volt is superior to the Prius.

Thank you GM for believing in this vehicle, but can we please beg you to reconsider discontinuing the ELR too?