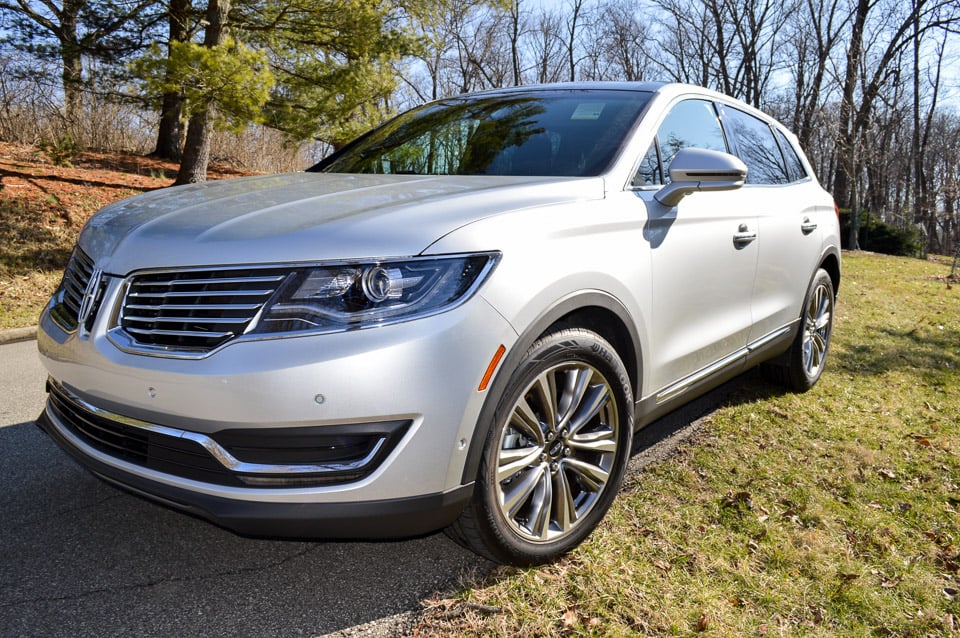 Some people are surprised that the Lincoln brand is still around. It’s certainly had some down years, but it’s still Ford’s luxury brand. Competing in the ultra-competitive luxury segment against the likes of Cadillac, Lexus, and the German brands means a crowded field. And for far too long, Ford didn’t do enough to distinguish Lincoln from its rivals, or even from its top-of-the-line Fords. My tester this week, however, shows that Ford is now refocused and recommitted to the Lincoln brand.

The 2016 Lincoln MKX is based on the Ford Edge platform, but it shares little else with Ford’s five-passenger SUV. And when you’re talking luxury, that’s a good thing. The Edge is a nice vehicle, but the MKX needs to be special because it carries that elongated, luxury Lincoln badge on it. And, the MKX is just nice enough to warrant the higher price tag and the luxury label.

The MKX, like the smaller MKC, has new looks. The overall aesthetic appearance of the MKX is one of class and elegance – like how Lincoln used to be. You can chalk up some of the resurgent success of Lincoln to the quirky Matthew McConaughey commercials, but truth be told, that can only get you so far. The product has to be strong, and with the MKC, the evidence is there with its overall looks. 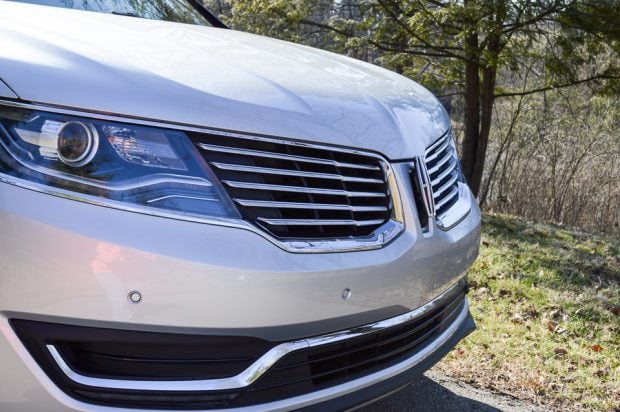 The front grille is wide and bold and reaches toward the squinty, but bold headlights. The MKX has a soft side profile with nothing overly garish. Rather, the MKX’s overall appearance teeters on timeless and certainly traditional. Minimally, the MKX rivals both Lexus and Acura in the styling now. It’s not as bold as Cadillac and not as sleek as the European luxury brands. But, make no mistake, the Lincoln MKX is luxurious enough to compete. 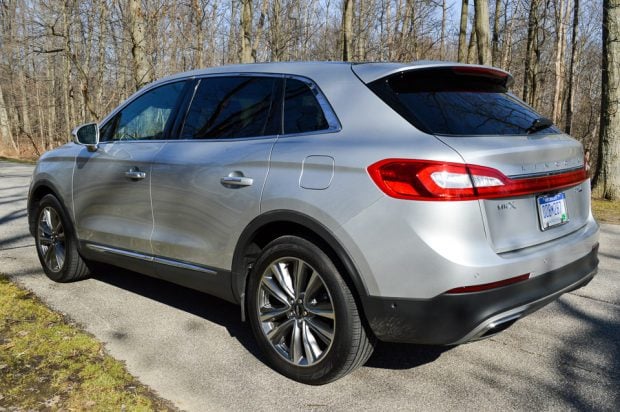 Lincoln benefits from Ford’s ability to get maximum power out of smaller engines. The 2.7-liter V6 EcoBoost engine in the MKX is fantastic! It makes 335 hp. There is a bigger engine option, a 3.7-liter V6, but that one makes only 303 hp and substantially less torque, and is actually the base engine for the MKX. It’s the far inferior engine and is representative of Ford not quite ushering out the old, stale things of Lincoln’s past.

Thankfully, my tester was the spry and crisp EcoBoost model. The responsive performance of this engine injects enthusiasm and excitement into the brand, something Lincoln hasn’t had in my memory. But with the 335 hp and the 380 lb-ft. of torque, the MKX is actually fun and quite agile. Not bad for an SUV that weighs more than two tons.

With all-wheel drive, power is spread out where needed. Switch to sport driving mode and steering is extra responsive, although the suspension is rougher and less comfortable. Since the MKX has enough power, and you don’t need it to be sports-car like, I found the comfort driving mode to be ideal, although normal is just as good. 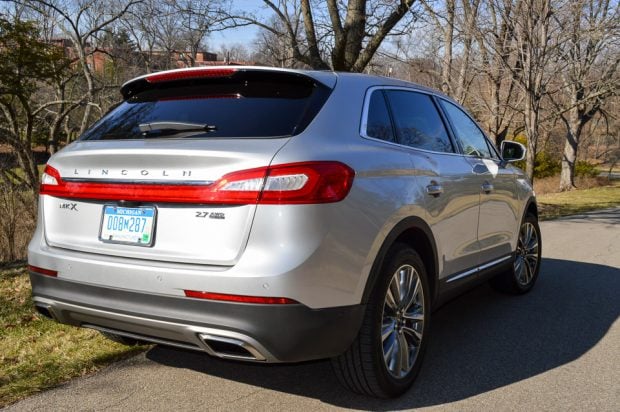 I was hoping for a little more from the transmission. A six-speed automatic transmission is the only option and while adequate, it seems to hold back during certain gears and some turbo lag is present too. Noise from the engine, and the road is practically non-existent. You won’t hear the turbo whine or the engine rev as you sit in quiet luxury inside the MKX.

Of course, a luxury brand is only as good as its interior, and if that’s the case, the MKX earns its luxurious title with high quality materials, a whisper soft cabin and roomy cabin. Unlike many vehicles on the road, the MKX can truly boast a three-person backseat. With significant headroom, legroom and shoulder room, the MKX can fit three adults in the back row without complaint. 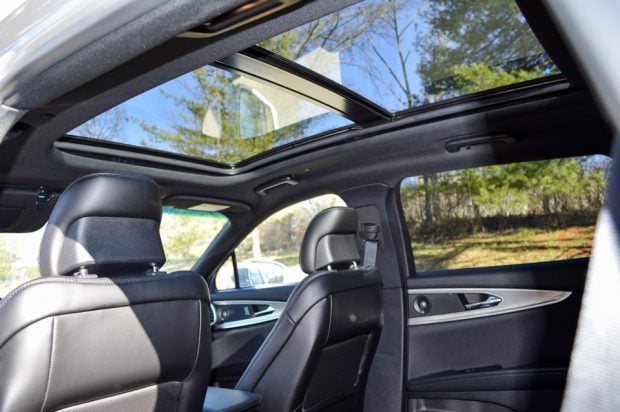 For 2016, the MKX gets increased dimensions, and the result is 37.2 cubic feet of space behind the second row. With all seats folded flat, the MKX has a total cargo area of 68.2 cubic feet. That is a 10 percent increase from last year’s model.

The simple, clean and somewhat conservative approach to the MKX’s cabin is reminiscent of many Lexus vehicles. While it might not be high end enough for some, it’s quite a bit better than it has been and certainly distinguishes itself from even a top-of-the-line trim Ford. For that alone, let’s give Lincoln some praise. 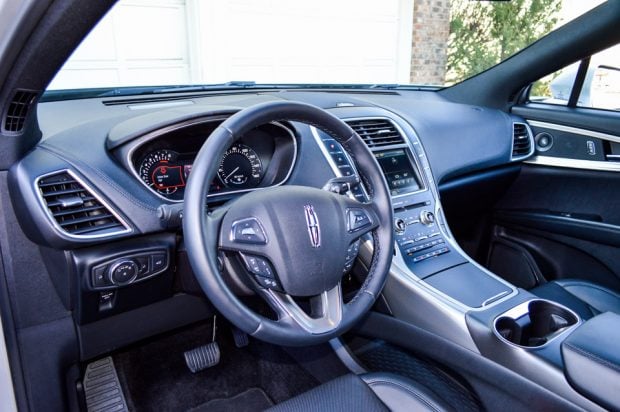 The center stack of the Lincoln is clean, simple and well-organized. The much maligned push-button transmission flanks the center stack and the eight-inch touchscreen. Thankfully, Ford updated their infotainment and put the new Sync 3 system into the MKX. It is remarkably better than the slow and frustrating MyLincoln Touch of the past. The entire Sync 3 system is easy to use, and is presented intuitively and clearly on the touchscreen. 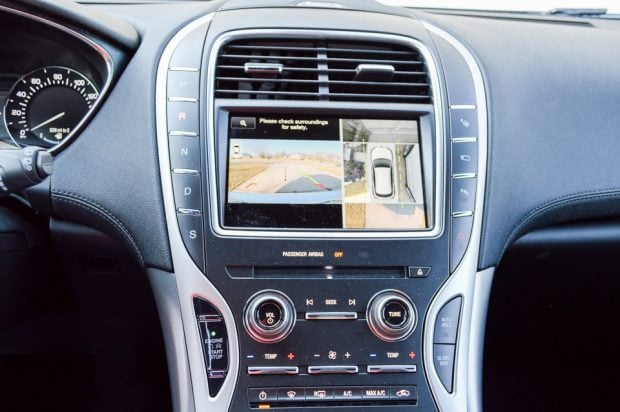 The smaller engine, with the turbocharged V6 is the more fuel efficient option (and is justification for why the smaller, better engine is $2,000 more). An AWD version of the base engine is rated at 16 mpg/city and 23 mpg/highway. My tester, with AWD, had a rating of 17/24. These aren’t great numbers when it comes to fuel economy so if saving at the pump is your sole purpose for buying a vehicle, then look elsewhere. In a week’s worth of driving, I averaged just under 20 mpg.

The price range for the MKX is quite wide. A FWD, base trim MKX starts as low as $38,260. However, my tester had a base price of $47,650. With options like a climate package, technology package and driver assist package, my tester’s final MSRP was $56,370, making it priced on the high end of other equivalent luxury SUVs. 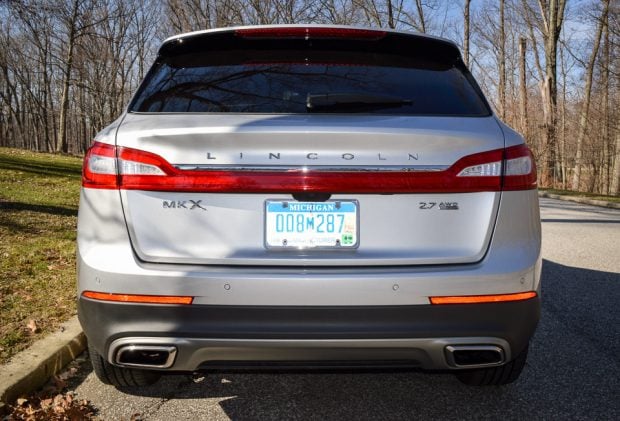 Celebrity pitchmen aside, there has to be substance behind a vehicle. And when talking luxury brands there has to be a justification for a higher price tag. The Lincoln brand is proving its merit again and really illustrates what a luxury five-person SUV should be. The MKX is both handsome and fun to drive and has enough luxury to provide comfort for all passengers.