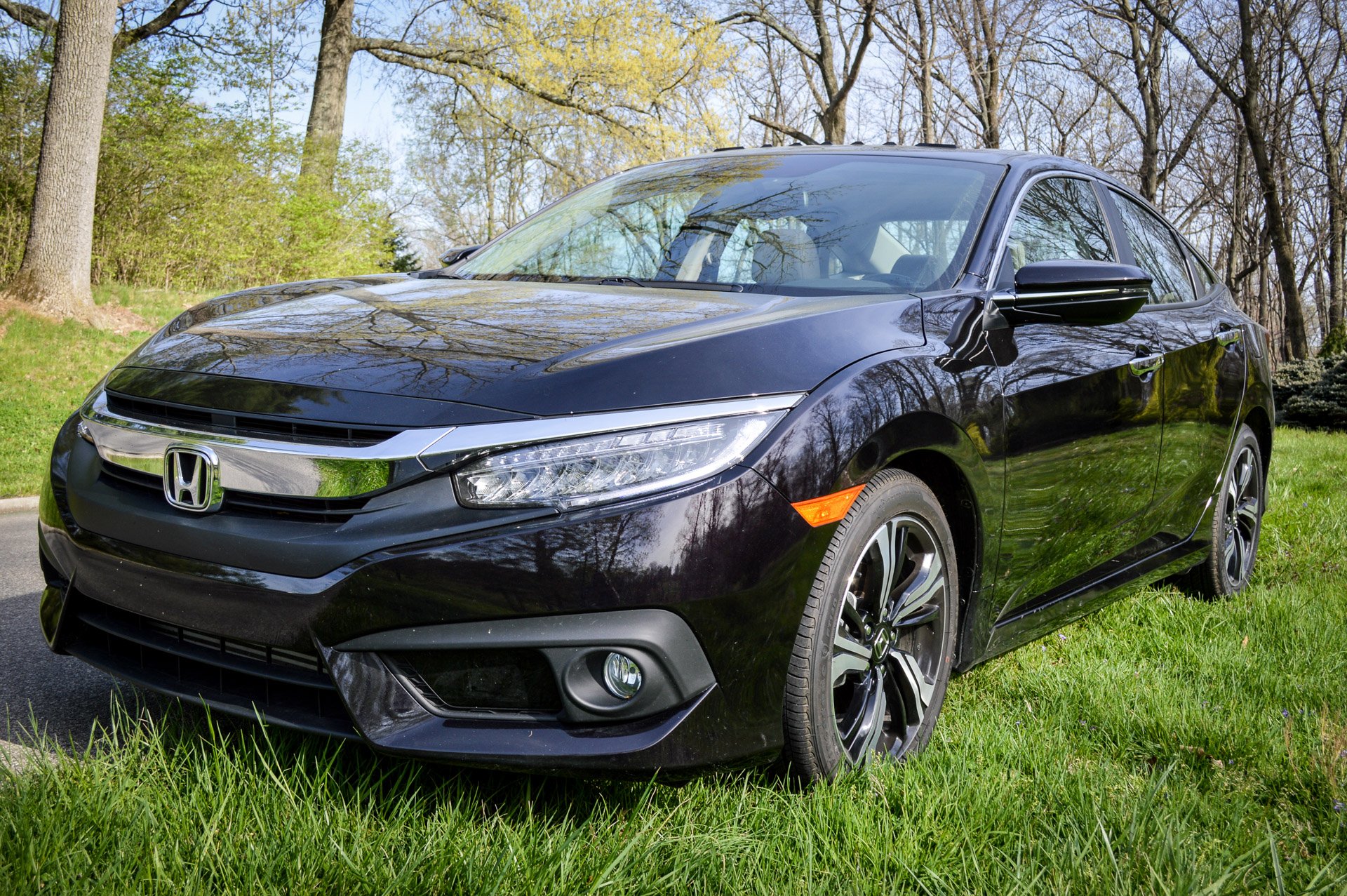 The Honda Civic is a steady performer one of the world’s top selling vehicles. It’s that mentality that has kept Honda from really going all out on giving the Civic what it needed. Honda last redesigned their compact sedan in 2011; well that was sort of the last time. The 2011 Civic was such a critical disaster that Honda hurried up and essentially remade it again in 2012.

Why bore you with details of the past? With the 2016 Honda Civic, Honda is finally back on track with its compact sedan. It’s everything it should have been in the early part of the decade. Better late than never, I suppose. 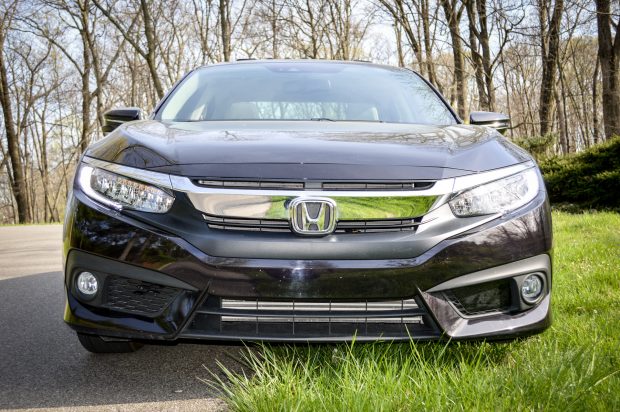 Arguably, the 2016 Honda Civic is the best looking Honda on the road, and certainly the best looking Civic ever. The looks are fundamentally better – from the slimmer headlights to the the stylized side panels. The grille is less pronounced and flows so well with the new headlights, and the otherwise upscale feel of the Civic. I never expected to use “upscale” in a review of a Civic, but honestly, the changes to the exterior are that drastic.

The sculpted back end has a sporty look. Gone is the plain Jane styling, replaced with a rear that is both modern and timeless. I drove the sedan version, but the coupe is even more attractive. There’s a five-door hatchback coming in mid model year too. 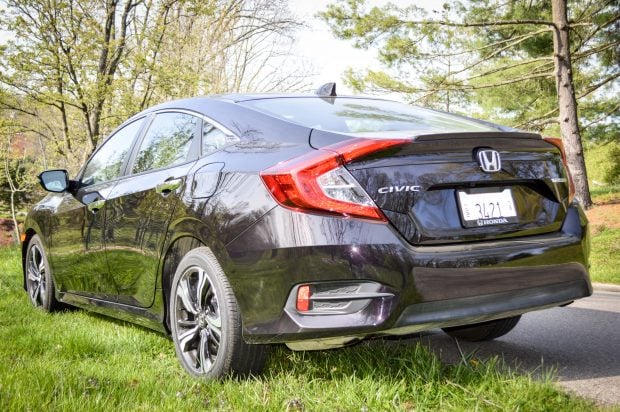 There are two 4-cylinder engine variants for the Civic. On the base EX and LX trims, there’s a 2.0-liter engine which makes a very average 158 horsepower. My tester was the top-of-the-line Touring trim, which, along with the EX-T and EX-L, gets a turbocharged 1.5-liter engine. This spunky engine makes 174 horsepower and 162 lb-ft. of torque.

The engine is full of pep, which is not something I’m used to from a Civic. This is another significant improvement for the Civic brand, adding turbocharged excitement to their engines. The Civic is still no speed demon, but it’s not the slug it used to be. 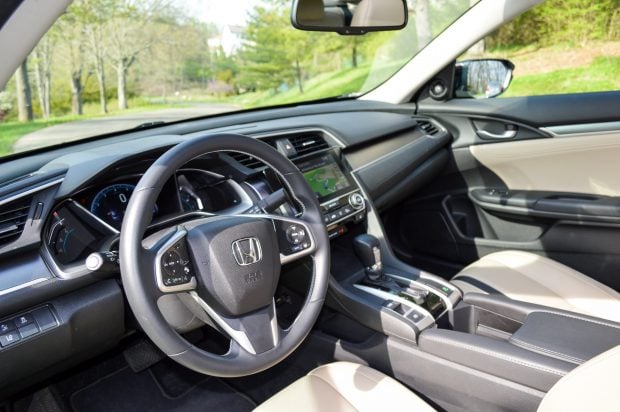 Unfortunately, a continuously-variable transmission is the only option with the turbo engine. A six-speed manual is an option on the lower trims. The CVT, like so many others, isn’t particularly thrilling. Plus, there is a noticeable turbo lag with this setup. If you’ve followed me on Twitter or any of my writing, you’ll know my disdain for CVTs in general, not just from Honda. What they bring in fuel economy, they detract from in overall driving dynamics.

Were it not for the CVT, the front-wheel drive Civic would get high marks for its overall driving performance, as the steering is responsive, and when driven in the available sport mode, the Civic is actually fun to drive. Again, I never expected to say that about a Civic before, so kudos to Honda for the improvement, now just get rid of the CVT, please! 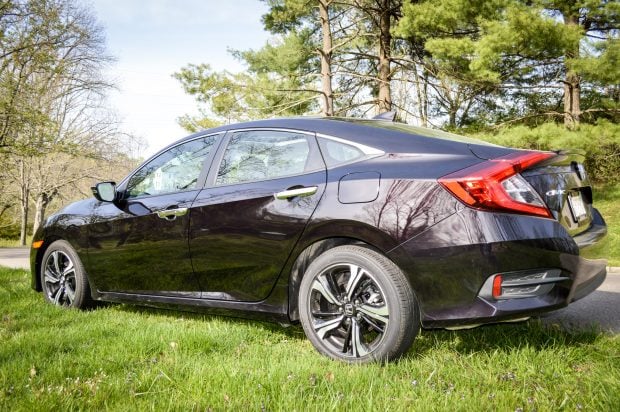 The 2016 Civic is wider and longer than the previous generation. While it makes the exterior look so sleek and sexy, it also improves the interior space and passenger comfort. For a compact sedan, this Civic is seriously spacious. It reminds me of the Fit, another Honda vehicle that is deceivingly roomy for passengers. Materials on the dashboard are much improved from the last generation too. The two-toned seats are extremely comfortable. Road noise is even appreciably decreased from other Civics, which is due in part to the softer materials used, especially on the Touring trim. 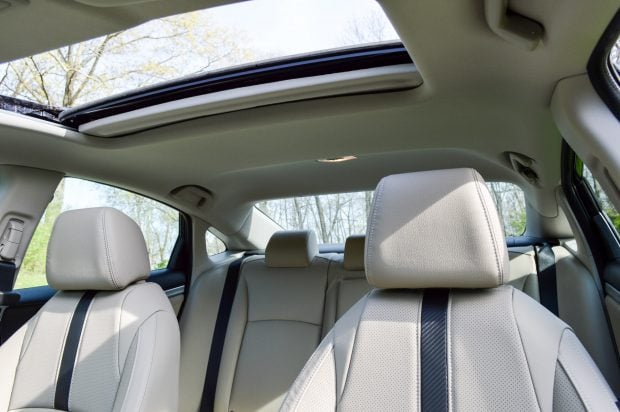 Rear passengers will find headroom adequate, which is surprising considering the sharp, sexy slope on the C-Pillar. Legroom is even good for taller passengers in the sedan. Trunk space is much improved. In all trims except the Touring, the Civic has 15.1 cubic feet of space (improved over the 12.5 from last year’s model). The Touring’s trunk is limited to 14.7 due to the bigger speaker system. Regardless, this is incredible trunk space for the compact segment. For comparison, the mid-size Honda Accord’s trunk is 15.8 cubic feet. 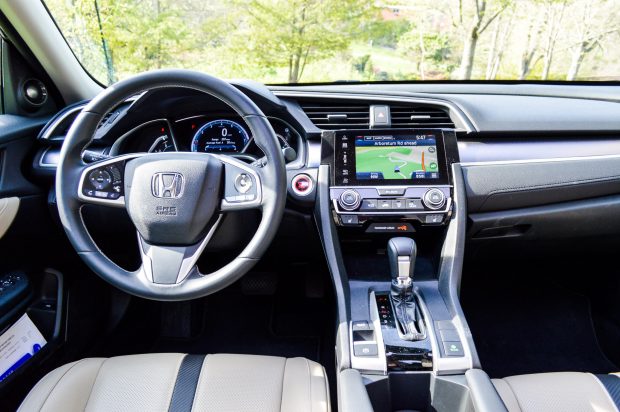 The Civic has improved technology too including a new infotainment system that integrates with Apple CarPlay. It all runs through an intuitive 7-inch touchscreen. Fellow critics found the touchscreen less responsive and the volume slide on the screen to be difficult to operate. I didn’t have these issues, and think the touchscreen works as well as most systems. Plus, for the driver, there’s an added volume control on the steering wheel that responds beautifully. Honda calls it a capacitive-touch switch which responds to slight movements over bringing the volume slowly up or down with just a slight wave of your thumb. This technology was really responsive and something not often found on an affordable vehicle. 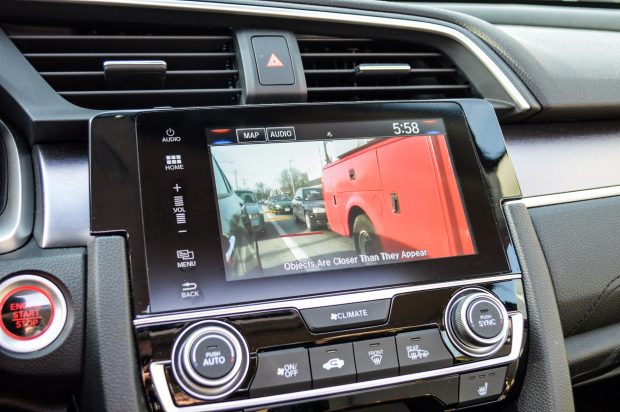 The most surprising thing, perhaps, about the 2016 Civic is the fuel economy is actually better on the turbocharged engine than on the more sluggish, non-turbo four-cylinder. It begs the question to Honda, why not just make this the only engine, since it’s faster, more fun to drive and more fuel efficient?

The turbocharged Civic has an EPA rating of 31 mpg/city and 42 mpg/highway. In a week’s worth of mixed driving, I averaged just under 40 mpg. My exact weekly fuel consumption was 38.6 mpg. Needless to say, I was quite impressed with that kind of fuel economy. It almost made me reconsider giving props to the CVT (not really). 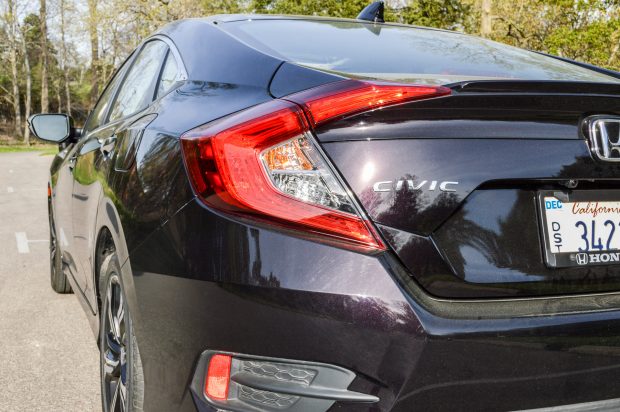 There are five trim levels for the Civic sedan. The base LX, with 16-inch tires comes with 16-inch wheels, telescoping steering wheel and a rear view camera. The LX has a starting MSRP of $20,275(USD). My tester, the top-of-the-line Touring has a base price of $27,335. Standard features for the Touring trim include 17-inch wheels, LED headlights, heated front and rear seats, a 450-watt, 10-speaker audio system, and Honda’s sensing package which includes sensor-based safety features like adaptive cruise control, lane-departure warning and forward-collision warning. The Honda Sensing package is available as an option on any Civic trim.

In the compact car segment there’s a lot of competition. The Civic has been a mainstay in that segment for decades now. Through varying different remodels, redos and reincarnations, the 2016 is practically a reinvention. It’s no wonder the 2016 Civic won the 2016 North American Car of the Year during the North American International Auto Show in Detroit, among many other accolades. Critics took note of the vast improvement, and so should buyers.