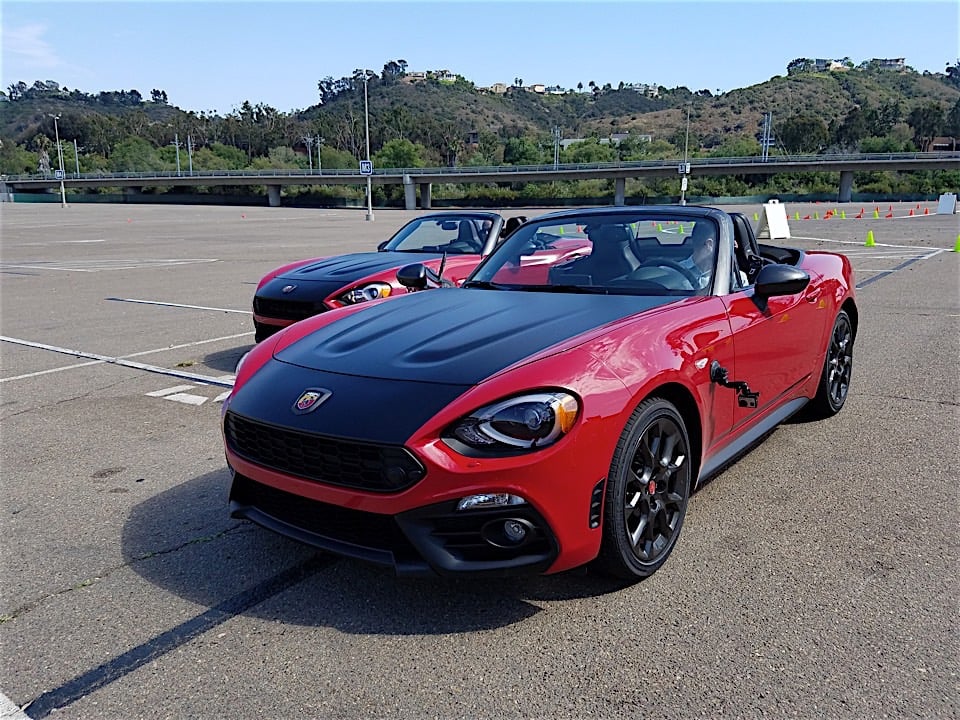 What happens when you take the lovable Mazda MX-5 Miata and change out the engine and exterior design for a little Italian flair? You end up with the 2017 Fiat 124 Spider. I recently had a chance to drive the new roadster in sunny San Diego to not only see if the new car is any good, but also to see how it compares to the crowd-pleasing Miata.

Fiat would have had to really work hard to make the 124 Spider terrible. Why? Because it’s based on the Miata. It shares many components under the skin as the Miata, and is even built alongside the Miata at Mazda’s plant in Hiroshima. When you get to start with that car as the base, you already have a leg up on most of the competition. 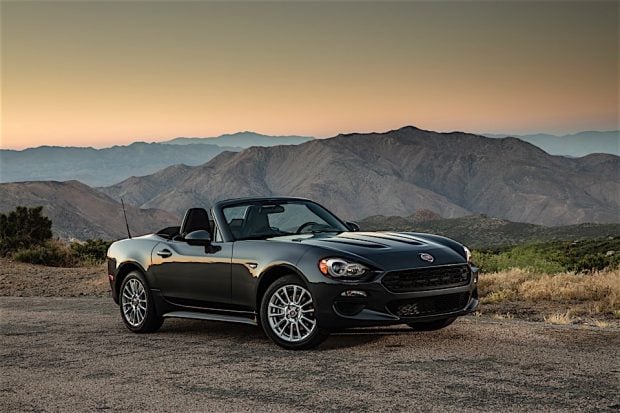 The 124 Spider is 5 inches longer than the Miata, even though they share the same wheelbase. The extra space makes the trunk slightly larger, which will be appreciated on weekend road trips. The suspension is also tuned differently to handle the different engine that’s under the hood.

Powering the 124 Spider is a 1.4L turbocharged inline-4 making 160 horsepower and 184 lb-ft of torque. That engine, for those who don’t know, is basically the same engine in the Fiat 500 Abarth. Though, in the 124 Spider it doesn’t sound as rowdy.

The 124 Spider comes in three trims; Classica, Lusso and Abarth. During my time behind the wheel, I was shocked by two different things. 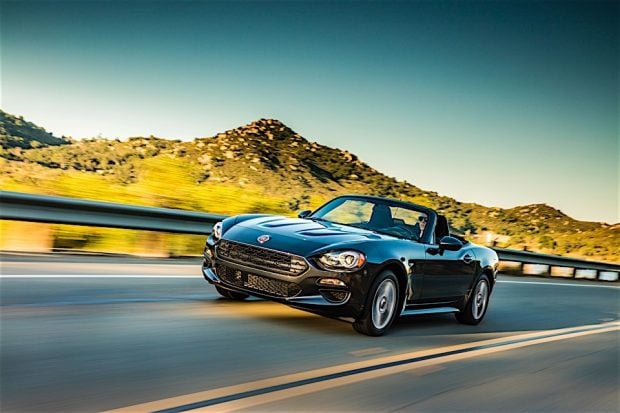 First, the Classica (base model) with no options and a 6-speed manual is a really good car. It has everything you really want out of a car and nothing you don’t. So you still get air conditioning and a radio with Bluetooth support, but no satellite navigation, blind spot monitoring, or a premium stereo.

But if you follow the roadster rules of “Top Always Down,” blind spot monitoring is pointless. Getting a stereo to sound good in a convertible is difficult. And you still use your cell phone for navigation.

The convertible top is easy to use, and can be operated with one hand. Fiat added a little bit to the top to make it isolate sound better than the Miata’s top. When the top is down at highway speed you can still have a conversation with a passenger at a respectable volume.

I was quite smitten with the Classica. and I wouldn’t fault anyone for skipping all the options and picking one up at $25,000. 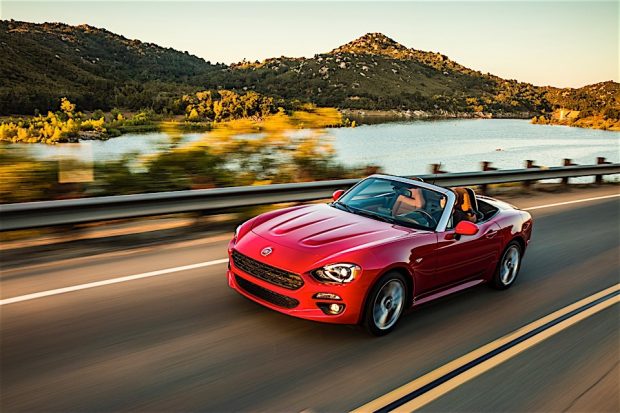 The Lusso is the premium version of the car, and has larger wheels and more options. If you like having option boxes checked on your car, the Lusso is the one to get.

The Abarth is the performance fan’s choice. Thanks to a bit of tuning, the Abarth makes 4 more horsepower than the regular 124 Spider, which you won’t notice, but you get Bilstein shocks and better braking performance. If you want, you can also add Brembo brakes a la carte. You even get some cool cosmetic touches, like a red tachometer and Abarth badges instead of Fiat ones. 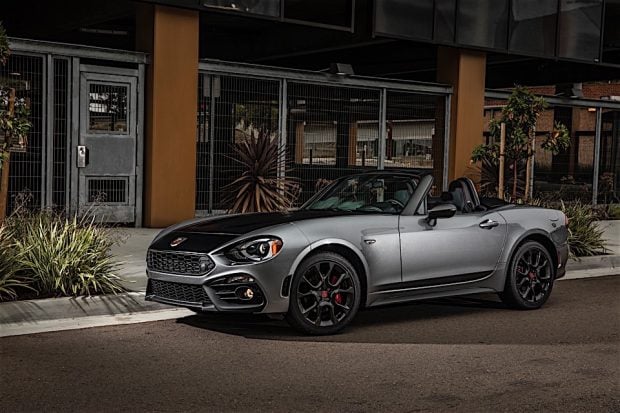 Unlike the Miata Club, you can spec the Abarth out with features to make the day-to-day driving more enjoyable. For example, there is a package that adds automatically dimming exterior mirrors. Driving a low-slung convertible at night can be painful if a pickup truck pulls up behind you.

Fiat set up an autocross at Qualcomm Stadium for us to really wring out the Abarth, and I have to say it’s quite a hoot. Turn the traction control off and drive it like a ham-fisted buffoon and it’s a laugh. Like the Miata, it is also very predictable. You know when the back end is going to give up before it actually does, and it’s easy to maintain control. Also, there seems to be a bit less body roll than the Miata Club.

Unfortunately, in stock form, the Abarth doesn’t sound as good as I’d like it to. In other words, it doesn’t sound like the 500 Abarth that we know and love. But, thanks to some accessories from Mopar, you can get that noise back. One of the cars on the autocross had a bypass valve installed and a dual-stage exhaust. It sounded glorious, and if you’re buying the Abarth it’s what you want to add to your car, too.

If it sounds like I’m a pretty big fan of the 124 Spider, you’d be right. But all is not perfect. The passenger seat legroom is a bit cramped, and there’s a hump near the seat which further limits space. 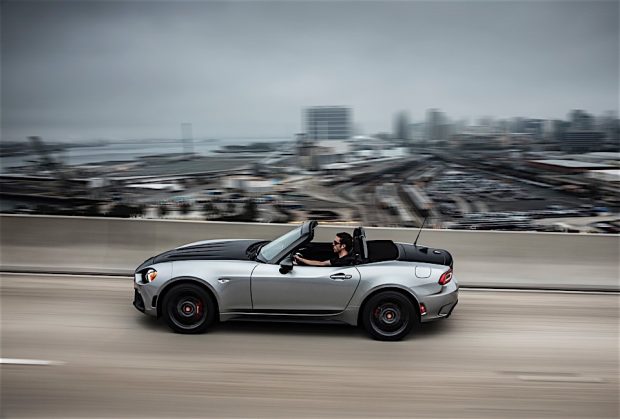 The 124 Spider uses Mazda’s infotainment system, which as of now isn’t set up for using Android Auto or Car Play – both are supported with Chrysler’s Uconnect system.

Finally, the automatic is just “meh.” If you absolutely cannot drive a manual transmission because of an injury, then go ahead and get the automatic. But if you just don’t know how to drive one because you were never taught, the Fiat 124’s setup is easy to learn on. Additionally, it’s so easy to drive the stick in this car and it adds so much to the experience that it’s worth saving the money for. 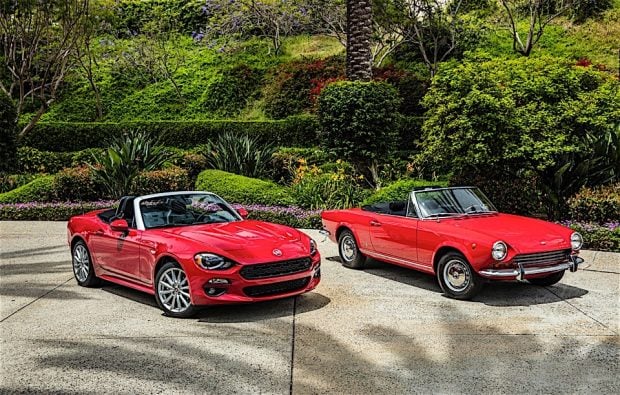 Besides, isn’t driving a sports car like this all about the experience? It’s not going to set any track records or win any drag races, but it’s a hoot to drive and won’t break the bank.