Driving a 2017 R35 GT-R on the Autobahn and at the track at Spa-Francorchamps sounds like pretty much a perfect day to me. That’s the itinerary for lucky bastard/Carfection host Drew Stearne in a video review of the latest iteration of Godzilla. As Stearne makes abundantly clear, the 562-horsepower, 460 lb-ft. torque, titanium exhaust R35 GT-R is a pussycat of a supercar, with cutting edge technology that makes it an uber-comfortable daily driver when cruising the Autobahn, and a track monster once it gets on a circuit. As a kid in his dad’s station wagon, Stearne would stumble onto the Spa F1 track, which back then included public roads. This time, he has a little more horsepower under the hood with a claimed 0-62 miles per hour sprint of 2.8 seconds. 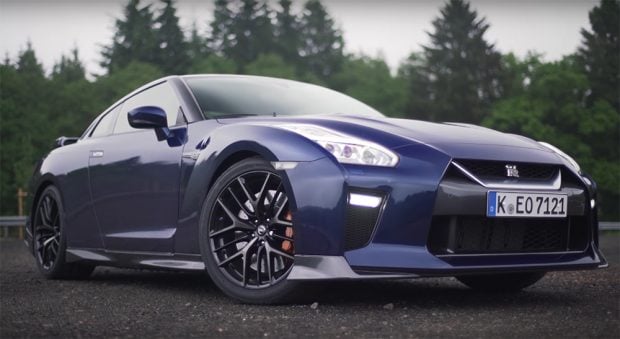 On the track, Stearne nearly lets the GT-R’s cuddly reputation get the better of him, resulting in his driving instructor’s panicky screams to brake sooner heading into turns. “It was easy to scare the jeebus out of my instructor by getting a little too confident with my braking points early on,” says Stearne. “This car is so forgiving, there’s a couple of times where if this car wasn’t so sophisticated, things would have gone wrong.” Thanks to Godzilla’s amazing all-wheel-drive traction, though, the monster stays on track.