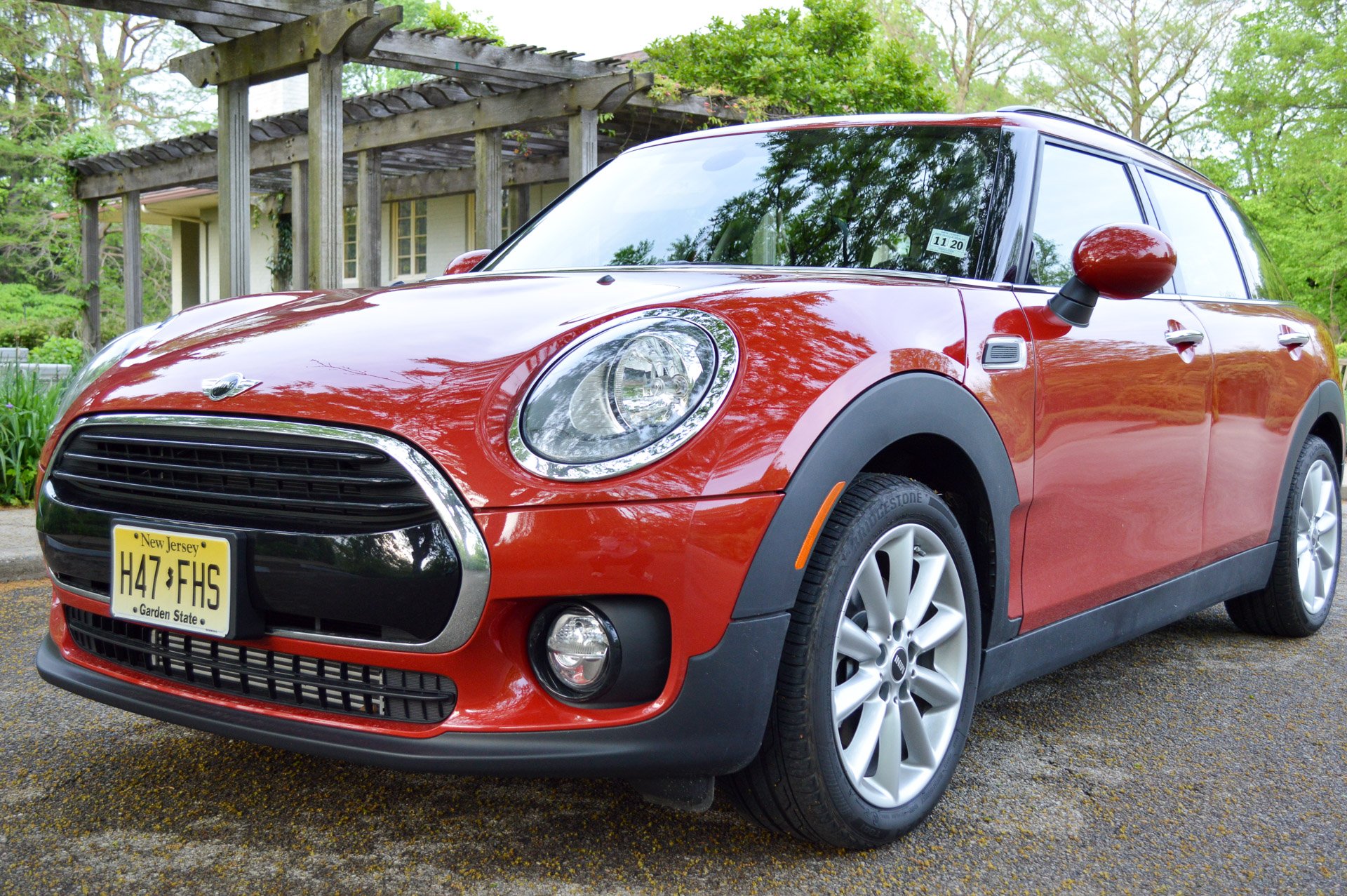 Driving is supposed to be fun, or at least that’s what I believe. We spend far too much time inside our vehicles for us not to get some pleasure out of them. That’s what the Mini brand counts on. It’s a brand based on making driving fun. And so it’s interesting to see Mini grow, and dare I say mature, while still holding onto to their fun-to-drive reputation. Enter the new Mini Cooper Clubman – a more mature version of the Cooper. Is it flawless? No. Is it quirky? Sure. Is it fun to drive? You betcha.

And the best feature of the Clubman is that it practically defies its own name (Mini). After all, it’s quite a bit bigger than the Mini Cooper. For some that may be a detraction, but for me, I found it to be an improvement. And, best of all, it still drives like a Mini, which means go kart-like handling, without the go kart-like frame. 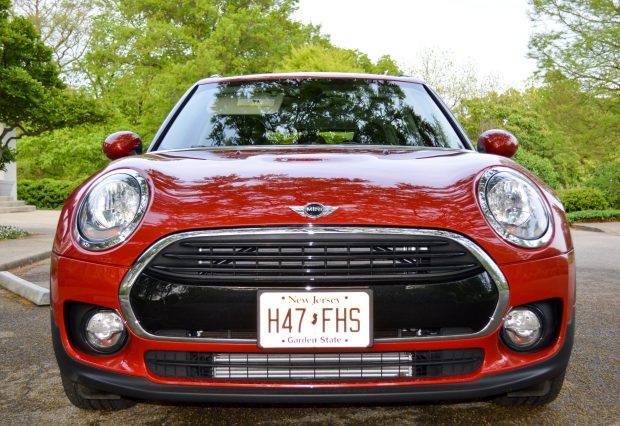 It was refreshing to feel relatively spacious inside a Mini. Normally you feel like that scene in Tommy Boy where Chris Farley is wedged inside a car in a very uncomfortable way (“fat man in a little car”).

Indeed, the Clubman is a big Mini (is that an oxymoron?). It’s 3 inches wider than the Cooper and 10 inches longer. It even has bigger dimensions than the Mini Countryman. With the added size, comes added weight. The Clubman has a curb weight of 3,015 pounds which is almost 400 pounds more than the diminutive Cooper. 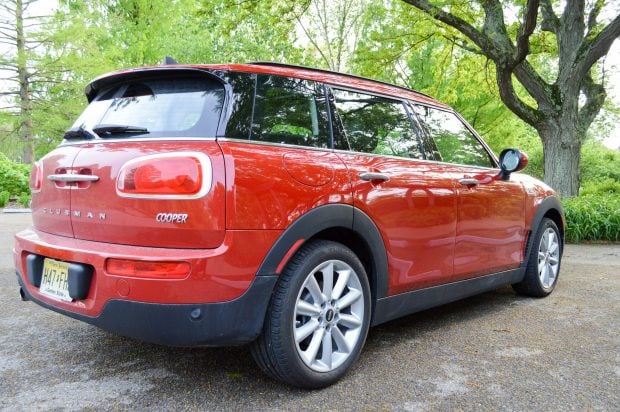 Fitted with the exact same engine, you can imagine there is some letdown in driving performance. The Clubman has a 1.5-liter turbocharged three-cylinder engine. It yields only 134 horsepower. While those output numbers are disappointing, there is a quicker option in the Clubman S which has a four-cylinder engine that makes 189 horsepower.

My tester was indeed sluggish off the line, but still performed well once it got up to speed. It performed ideally in the lower gears at speeds under 45 mph. A six-speed manual transmission is standard, though my tester had the optional automatic transmission. This transmission was adequate, but uninspiring there was some initial turbo lag, leading to disappointing performance from a stop. 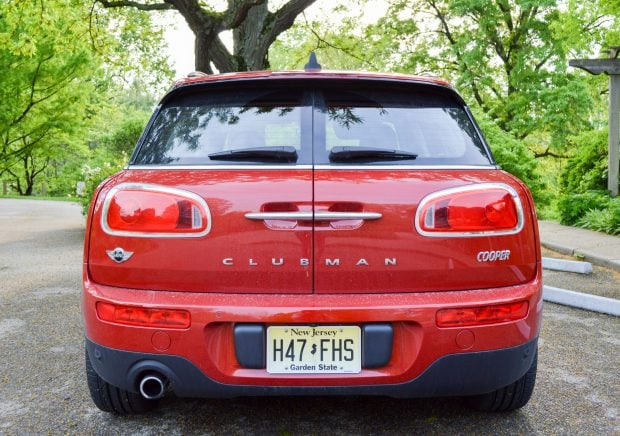 The Clubman still drives like a go kart, but only a slightly slower one. The handling is superb, and even with the wider and longer dimensions, it takes curves very well and performs quite similarly to the regular Cooper.

There are three selectable driver modes including mid, green and sport. The green mode was the most fuel efficient and also the dullest of the settings. Sport mode made the steering feel very responsive. Mid mode was adequate.

The four-door hatchback has lots of European design touches. Large headlights dominate the front end. Some complain that the Mini is a little too cutesy with its styling, but I’d just call it distinctive. The back hatch opens like a cargo van, with both doors opening outward, instead of upward. Again, this adds to the Clubman’s quirky nature, and certainly helps with loading items into the back cargo area. 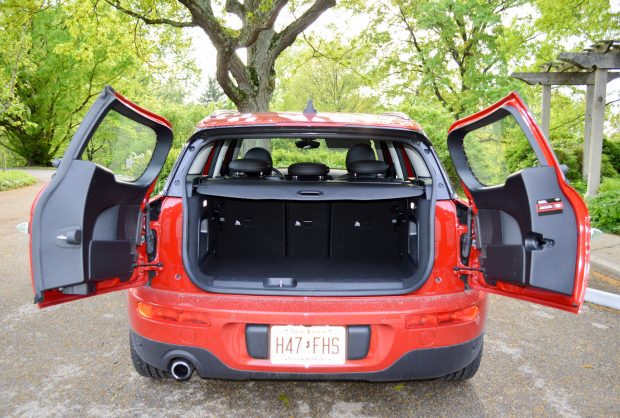 Inside, all of the features that Mini is known for can still be found in the Clubman. My tester had leather throughout, including on the steering wheel. The Clubman still has the big steering column that moves up and down with the odometer/tachometer attached to it. 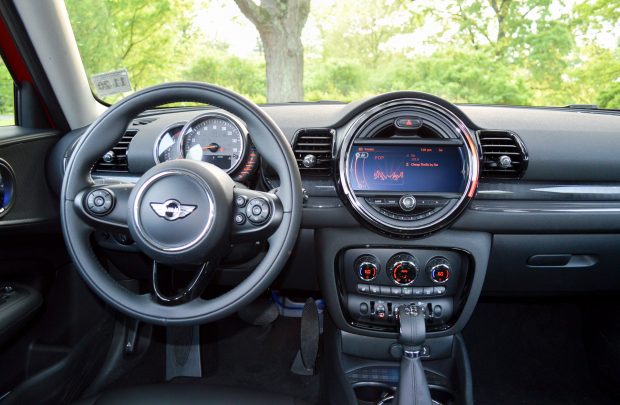 The center console is still gloriously unconventional. A 6.5-inch touchscreen dominates the center console. It’s encircled by a glowing light that pulsates. This ambient lighting is interesting to say the least.

The Mini Connected infotainment system is a little cumbersome. Controlled with both knobs and buttons, there’s a lot of dialing around and pushing of buttons to do simple tasks (like setting favorites/presets). It does integrate easily with smartphones however, and there’s even a USB port. Overall, the infotainment system is unlike any other car maker’s. Some will love it and some will most definitely hate it. 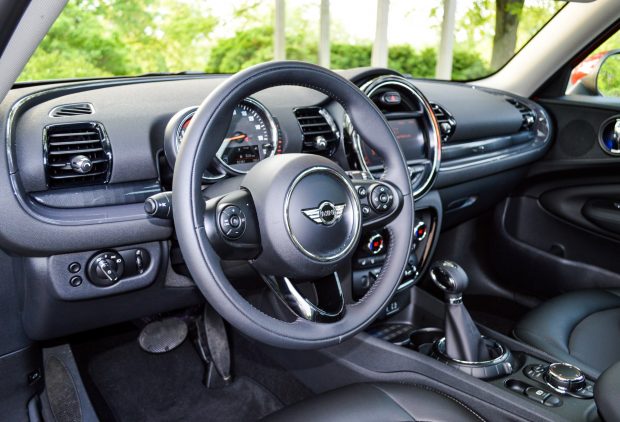 The Clubman’s interior is as nice as that of any Mini available. The back seat is also surprisingly spacious. Taller adults will find the back seat to have plenty of legroom and headroom. Behind the back seat there’s 17.5 cubic feet of space, accessed through the swinging dual doors. Fold the second row flat and there’s 47.9 cubic feet of storage space. It’s rare to even talk about storage space with Minis, but with the Clubman it’s comparable to other hatchbacks in the segment. 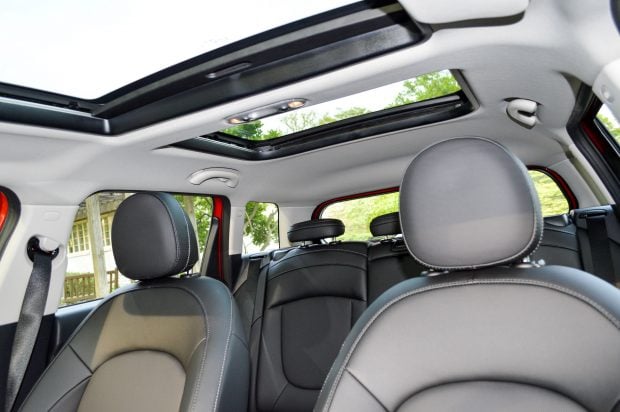 There are only two trim offerings, the Cooper and the Cooper S. Standard equipment for the Cooper includes 16-inch wheels, heated mirrors, leather seats, leather telescoping steering wheel and leather gear shift knob. All of the leather feels solid and durable and is an excellent touchpoint. MSRP for a basic Cooper Clubman is $24,100. My tester came with several options, including the technology and advanced electronics packages, moonroof, run flat 17-inch tires and roof rails. Final price tag on my tester was $31,750. 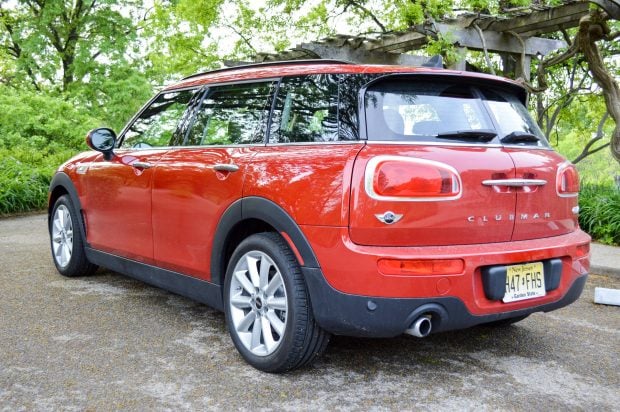 The Clubman has an MSRP of 25 mpg/city and 34 mpg/highway. In a week’s worth of driving, I averaged 28 mpg. It may have inched closer to the 30 mpg mark had I used the Green mode more.

For this model year, the Clubman feels more mature. Perhaps it’s the extra room, or the slightly upgraded materials, but the Clubman is showing its BMW influence a little bit with this more grown up version. It’s a refreshing vehicle. It’s both distinctive and fun to drive. It holds true to many of the wonderful idiosyncrasies of the Mini brand, while also expanding interior space and improving interior quality. And it’s still just fun enough to drive that it would make a dull commute a little more exciting.