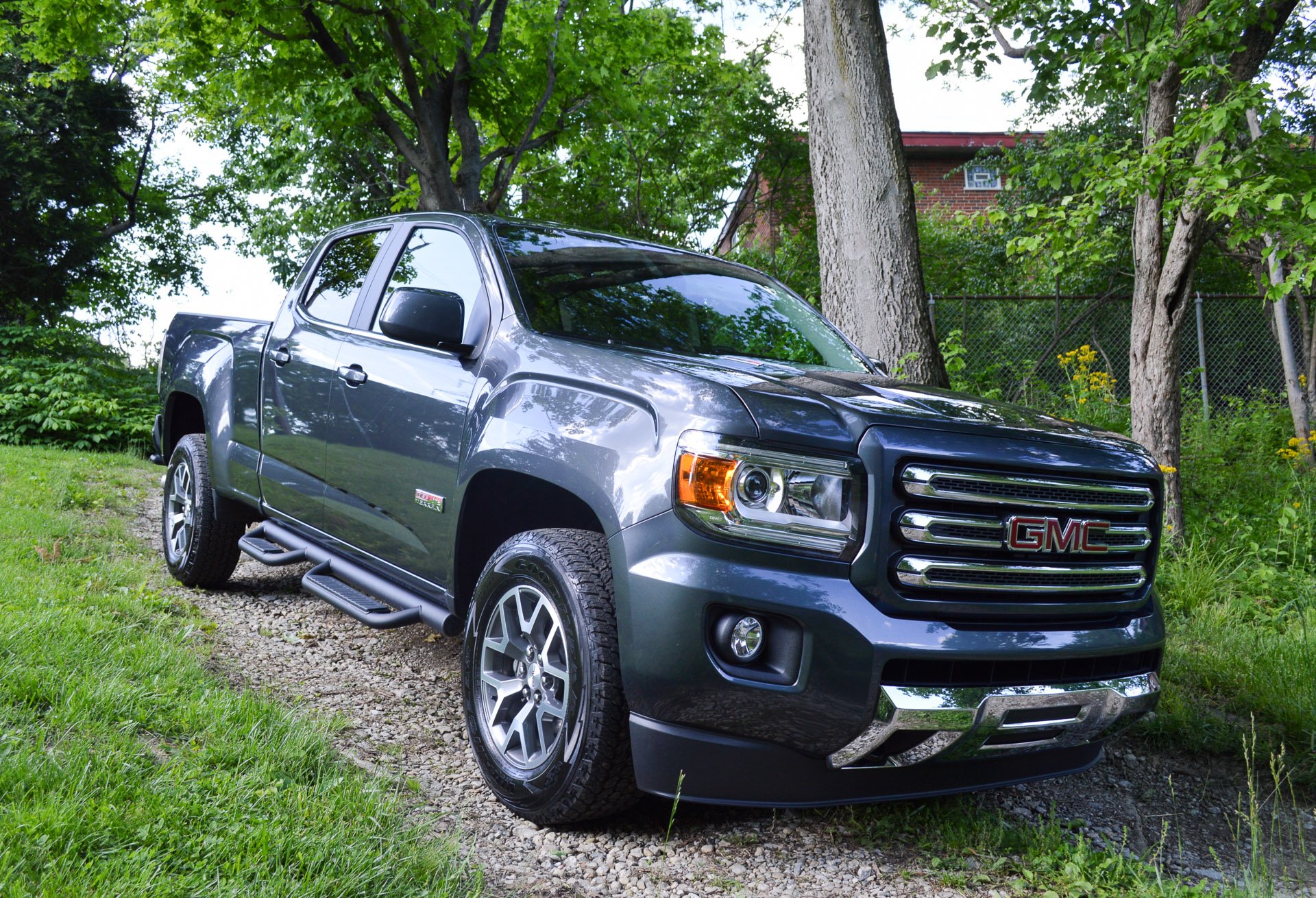 Today’s pickup trucks have to be big and durable and tow an RV, while carrying a palette of bricks in its bed. Right? WRONG! The small truck segment is back and growing, proving that bigger doesn’t mean better. Believe it or not, just because a truck is small doesn’t mean it’s not capable and rugged.

Since the Chevy Colorado and GMC Canyon were introduced last year, General Motors has changed the way people think about small trucks. This year, they are adding diesel variants into the mix for both trucks. The 2016 Canyon pulls into the big boy arena with a Duramax diesel engine under its hood. After spending a week with the Canyon diesel, I have come to the conclusion that it just might be better than some of the full-size trucks I’ve driven. 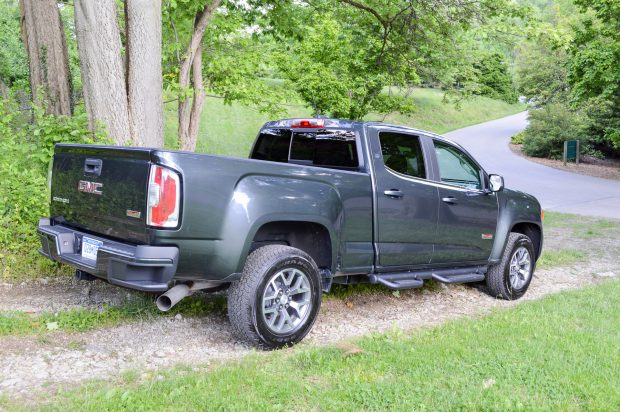 The Canyon, in fact, is quite comparable to the Sierra in many important ways. First, even though it’s shorter and lighter than the Sierra, it doesn’t look significantly smaller than the Sierra 1500. The Sierra’s wheelbase is 133 inches while the Canyon’s is 128.3 inches. Meanwhile, the Canyon is less than 10 inches shorter in length than its big brother. And now, thanks to the Duramax diesel engine, the Canyon can actually outperform some Sierras. This Canyon can tow up to 7,700 pounds, which is more than certain trims of Sierra.

Considering the Canyon’s smaller size, it actually helps in how it drives. The Sierra drives big, and the Canyon drives more like an SUV. The Canyon feels a lot more agile and is a lot easier to get in and out of while the Sierra is a behemoth. 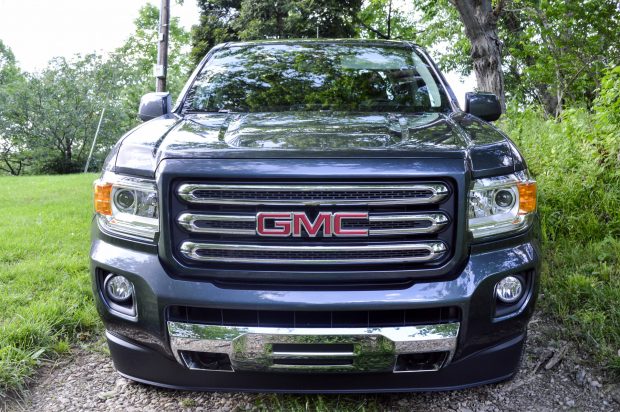 Even though my tester came with running boards, they were almost unnecessary as the Canyon’s ground clearance is only 8.6 inches. The long box truck bed of my tester gave the Canyon an elongated look, and at a glance it appears to be a full-size truck. The bed had a spray-on liner and dealer-installed cargo tie-down rings. The grille resembles that of the Sierra with a dominating, rugged-looking front end. Projector-type headlamps give it distinction at night. Daytime running lamps and front fog lamps also add to the attractive, masculine appearance of the Canyon. 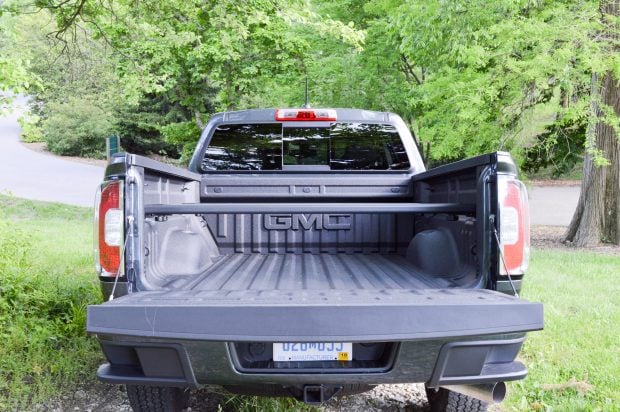 A 2.8-liter, 4-cylinder Duramax turbocharged diesel engine is the big addition to this year’s Canyon. It makes only 181 horsepower, which sounds quite underwhelming on paper. What it lacks in horsepower it makes up for in torque. The Canyon’s diesel engine makes an impressive 369 lb-ft. of torque. There’s a six-speed automatic transmission that is adequate, and there is minimal turbo lag. Still, I feel like more gears would serve this truck better.

The Canyon is available in 2WD or 4WD, like the one I drove. In this version, the Canyon is off-road ready. Its smaller size also makes it more nimble on dirt than full-size pickups. My tester came with hill descent control and an off-road suspension package too. The 17-inch tires are right sized for this truck. I didn’t take this Canyon off road, but I’ve been in a Canyon on a dirt/mountain course before, and it handles itself better than bigger trucks.

The GMC brand is considered a premium upgrade to the Chevrolet brand. The Colorado has similar dimensions and performance to the Canyon, but it’s the interior where the Canyon really differentiates itself and earns its higher price tag. 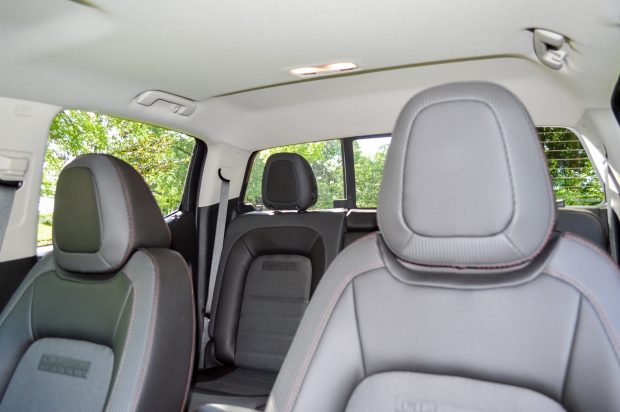 The inside of the Canyon has plenty of soft touch points and luxury. The leather-wrapped steering wheel feels great in the hands. Leather seats in the front and back are plush. A padded door panel and soft dashboard helps to keep the Canyon quiet, and good insulation keeps the noise of the diesel at bay. 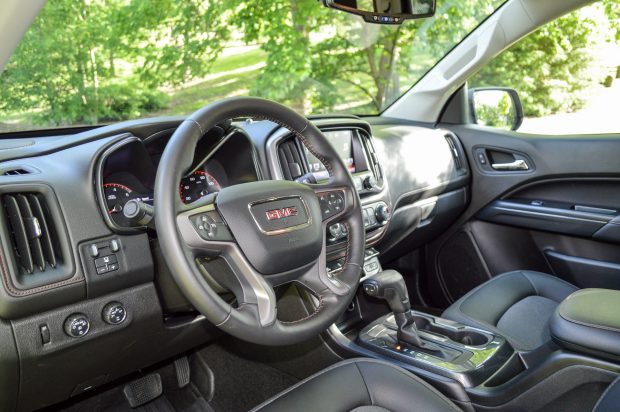 My tester had the All-Terrain package which included heated seats, lumbar support and the aforementioned running step boards. A rear-sliding back window (a growing popular trend in the truck segment) is also part of this package.

GM has significantly improved its infotainment system across all marques. The Canyon comes with the new and improved MyLink system. It is run off a responsive 8-inch touchscreen. The new MyLink system is intuitive and the best infotainment system in the industry at this point. The system seamlessly integrates with Apple CarPlay, it has four USB ports, and there’s also a 4G LTE Wi-Fi hotspot to help connect all those devices you have plugged in. 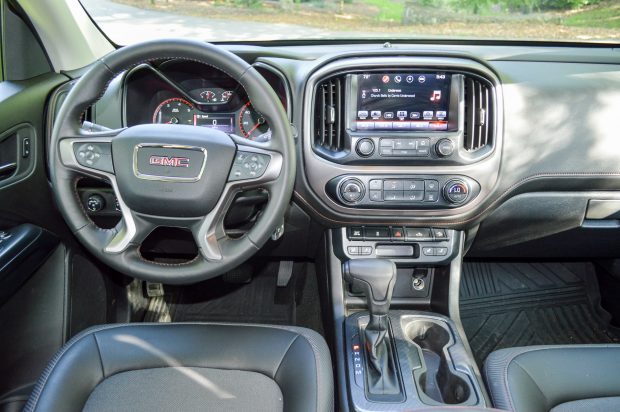 As configured, the truck gets an EPA rating of 20 mpg/city and 29 mpg/highway. Thanks to the diesel engine, this Canyon is the most fuel-efficient truck GMC offers. 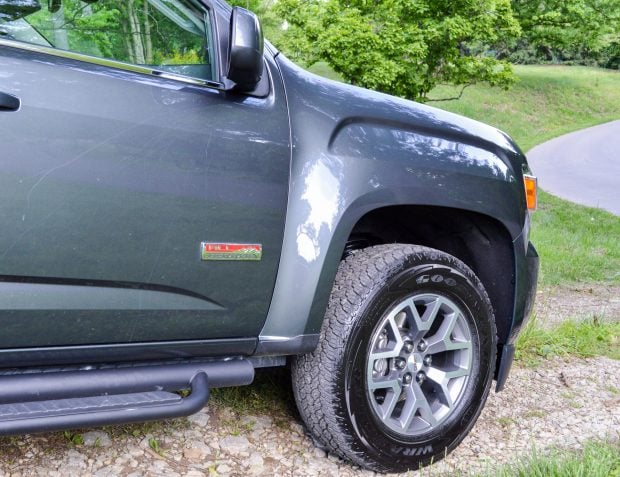 The Duramax engine adds an extra $3,730 to the overall price of the base Canyon, and my tester had a final MSRP of $43,790 (after several options are added to it). Where else can you find diesel performance for that kind of price these days? (The diesel-equivalent Sierra is about $20,000 more).

Too often, the truck-obsessed American consumer uses big trucks for their daily commutes. But with the Canyon’s fuel economy, size and comfort, you can easily make a case for it as a daily driver, while still getting the utility of a truck. With the outrageous pricing of full-size trucks, smaller trucks are becoming more popular yet again. Now loaded with amenities and diesel power, smaller trucks are getting even better. The 2016 GMC Canyon, with its Duramax engine and small frame makes it an ideal truck for weekend warriors and daily drivers.