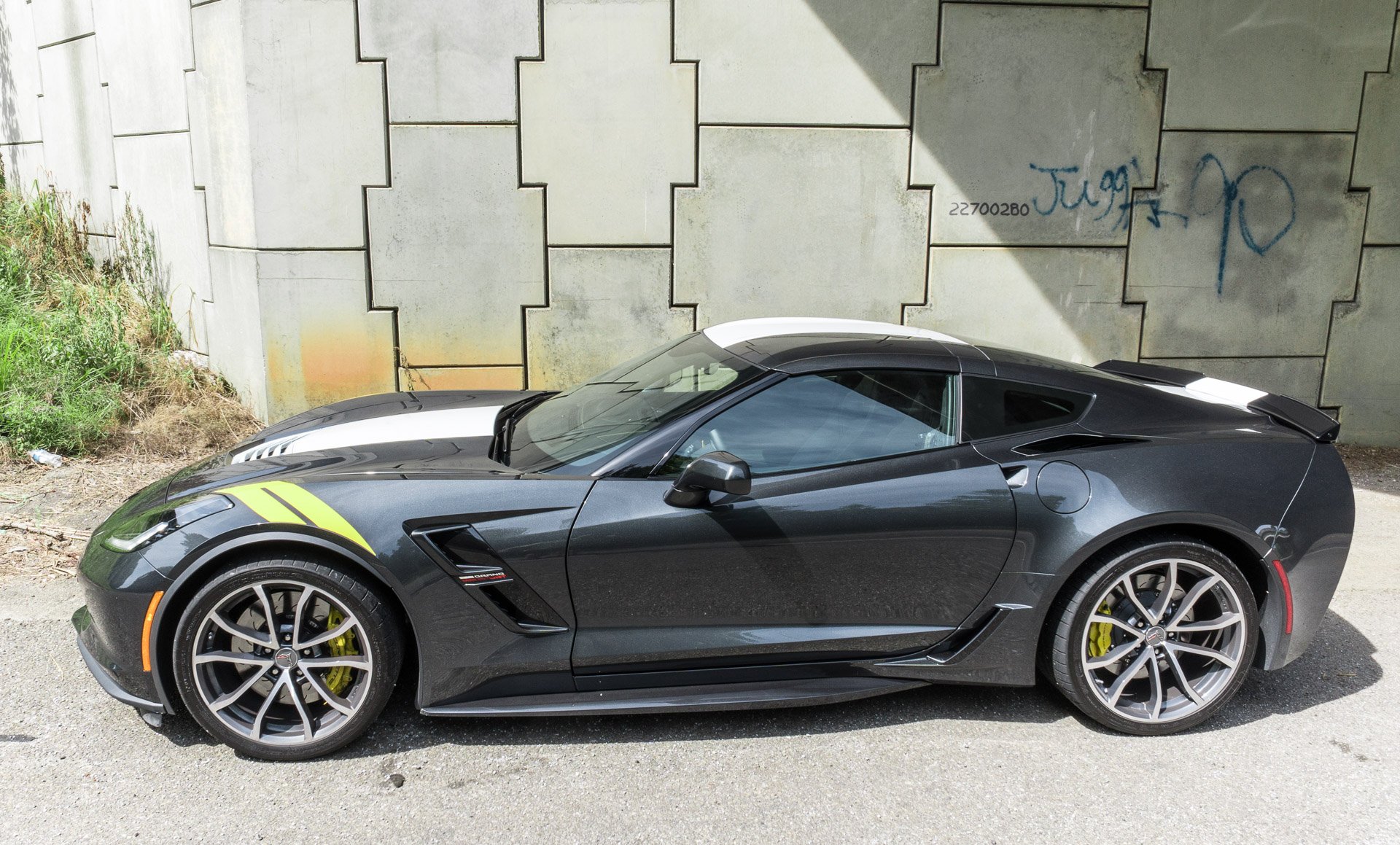 About a year ago, I had the opportunity to spend a week with a C7 Corvette Stingray, and I absolutely fell in love with the car. The current generation of Corvette not only looks amazing, it’s on a performance level with cars costing significantly more money. Now, with the release of the 2017 Corvette Grand Sport, we’re getting the best handling Corvette ever. I recently had the opportunity to drive a few Grand Sports on the roads on the outskirts of Atlanta, and then on the track at Atlanta Motorsports Park. 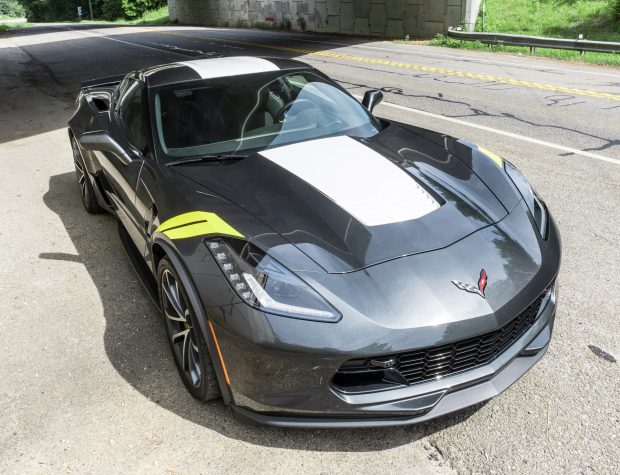 At first glance, you might think that this is simply a cosmetic package, but you’d be wrong. The Grand Sport’s aero bits, wider rear fenders and wider track improve the car’s overall balance and stability. Sticky new tires give it an insane amount of grip, an eLSD, special stabilizer bars, springs and Magnetic Ride Control keeps the ride just right on or off track, and big Brembo disc or carbon ceramic brakes help it stop on a dime. The Grand Sport can go 0 to 60 in just 3.6 seconds, 60 to 0 in less than 100 feet, and pulls up to 1.2g in the corners. 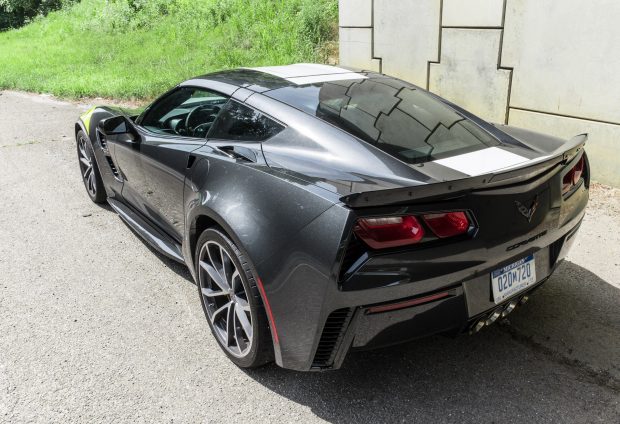 If some of these features sound familiar, that’s because they’ve been derived from the top-of-the-line Z06, a decidedly more expensive and elusive Vette. The big difference here is that the Grand Sport keeps the 460hp LT1 V8 engine from the Stingray, with one significant upgrade – it’s got a dry-sump oil system, which helps manage engine lubrication in extreme cornering. This is the kind of system typically found in pro race cars, and not in street legal production vehicles. 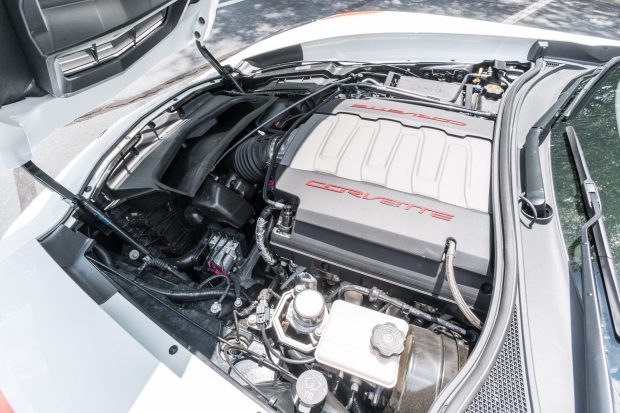 The Grand Sport can be had with either a seven-speed manual gearbox, or an eight-speed automatic. The manual offers active rev-matching, for amazingly smooth and satisfying downshifts, regardless of whether you know how to heel-toe. The automatic gets paddle shifters, though it’s so brilliant at knowing when to shift all on its own, I’m not sure if the paddles provide any performance advantage, but they are fun and engaging. 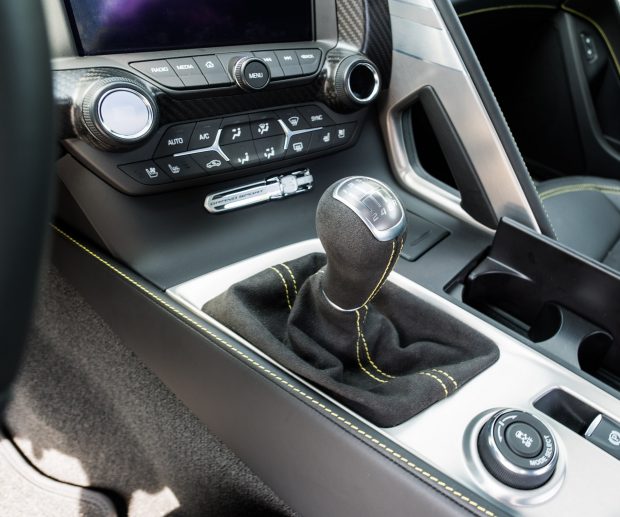 On the open road, the Grand Sport is simply fantastic. The interior offers comfortable, yet very supportive sport seats, and the upscale, yet sporty material selections include leather, carbon fiber, aluminum, and suede. That said, the passenger compartment is decidedly driver-centric, and kneeroom is a bit tight for the passenger. Still, this is a car you could definitely drive hundreds of miles in before fatigue would ever set in (and I speak from experience). I was particularly happy to take advantage of the ventilated seats, since it was somewhere around the temperature of the surface of Mars during my visit to the ATL. 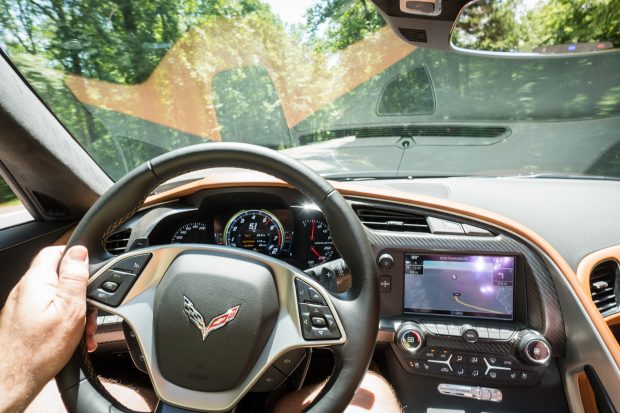 The Grand Sport looks, drives, and sounds wonderful on the road, but it’s truly at home on the track. Its wide rear fenders and sticky Michelin Pilot Super Sport tires help give it lots of grip, though to really push the envelope, you’ll want to go for the Z07 performance package. This adds carbon ceramic-matrix brakes, and Michelin Pilot Sport 2 Cup tires, transforming the Grand Sport into a serious track beast. All of the cars I drove on the track included this package, so keep that in mind when it comes to my track impressions.

Thanks to its naturally-aspirated V8, power is instantaneous, and the torque curve is very linear. I spent most of my time in Sport or Track modes, which provide the weightiest and most direct steering, along with tighter suspension. Track mode drops most of the computer nannies. Unlike some high torque RWD sports cars, this one grips and turns so incredibly well, that you always feel in control. It’s clear that Chevy’s engineers were focused on making the Grand Sport fast around road circuits, and the car doesn’t disappoint. 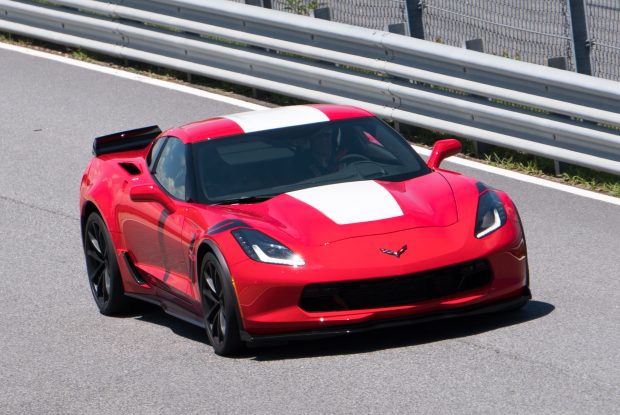 Even on the most challenging twists, turns, and elevation changes of Atlanta Motorsports Park’s road course, the rear of this Vette wouldn’t break free, and I went where I wanted to go. It’s this type of precise control and poise that makes me say that the Grand Sport is the best Corvette yet. Having only spent a brief time in a Z06, I felt that its 650 hp supercharged engine was almost too much for the car, making it a bit of a challenge to drive. On the other hand, the Grand Sport is ridiculously easy to drive, with just the right amount of power for its weight, plus the aero, braking, and suspension aplomb of its pricier brother.

The chart below provides some perspective on the differences between the four main Corvette variants available today. The Z06 is definitely faster in a straight line, but I’m not so sure I couldn’t beat it on a road circuit in the Grand Sport – at least at my level of driving skill. 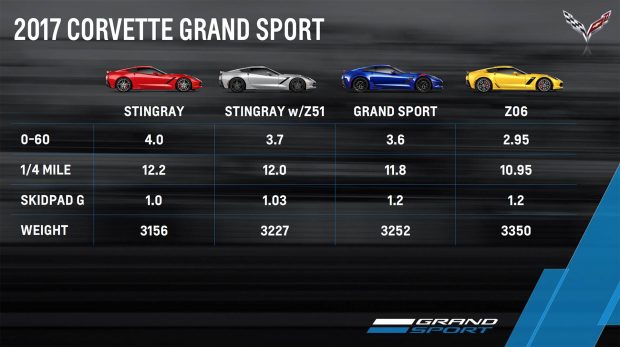 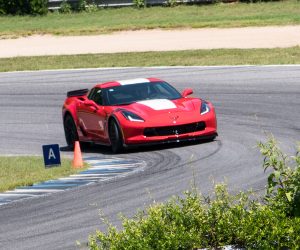 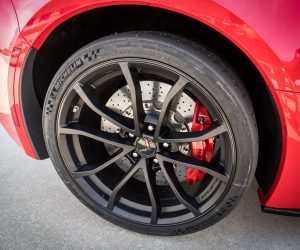 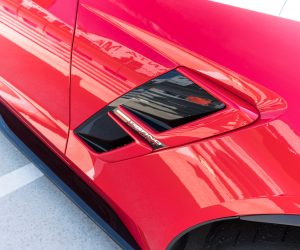 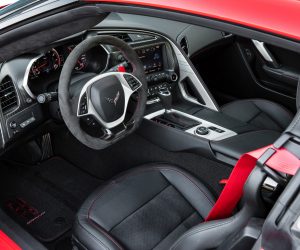 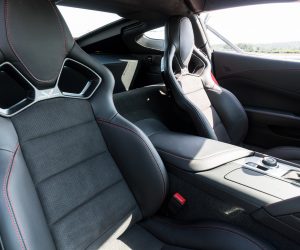 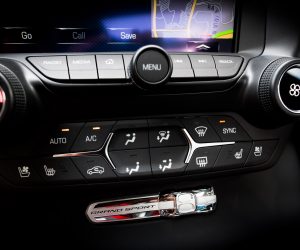 Buyers of the Grand Sport get to choose from a wide variety of paint colors, body stripes and hash mark embellishments, as well as numerous interior looks. You can even get it with red safety belts if you want. I’m particularly enamored of the rich Watkins Glen Grey Metallic with the acid green body accents shown at the top of this post. There’s also a special Collector Edition coming later in the year with a sweet accent color called Tension Blue on both the exterior and on the leather and suede interior. 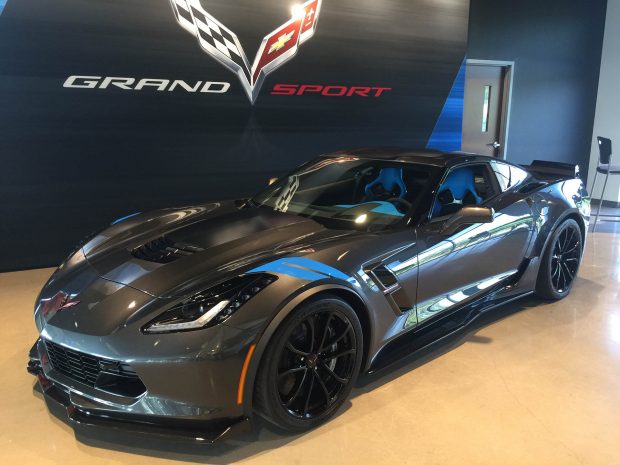 The coupe version offers a removable hardtop with a fancy diamond-quilted suede lining, but those who prefer to drop the top all the way have the option of a full convertible Grand Sport. This model gets all of the same bells and whistles, and can drop its top at speeds up to 30mph. 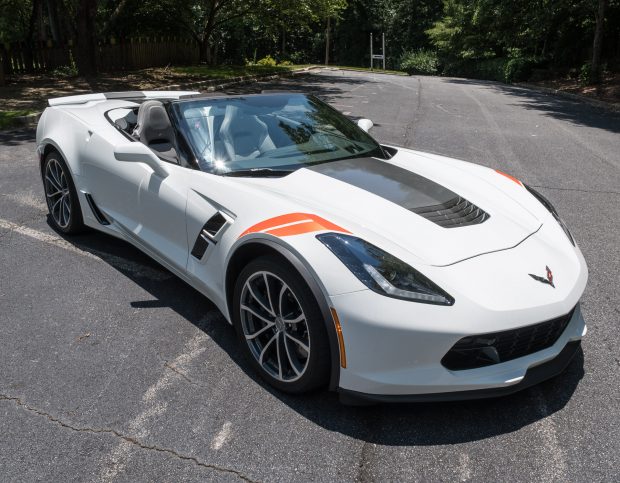 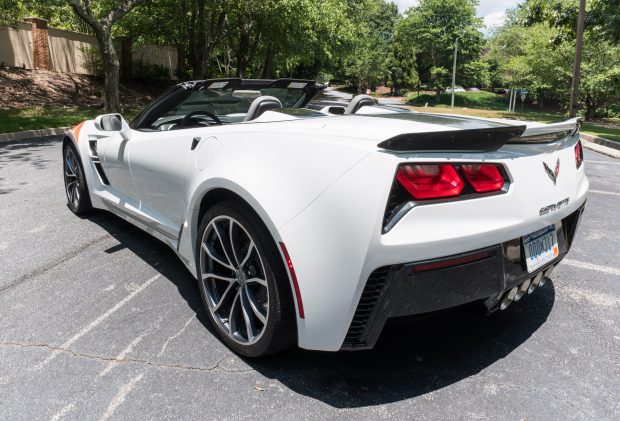 Pricing for the 2017 Corvette Grand Sport starts at $66,445 for the coupe model, and $70,445 for the convertible. Expect to spend closer to $80,000 if you decide to go for the track optimized Z07 package. Even if you do spend that much, you’d be hard pressed to find a car that is this satisfying to drive for the price. It truly is a car you can drive on both the street and on the track, and you’ll have a big grin on your face either way.