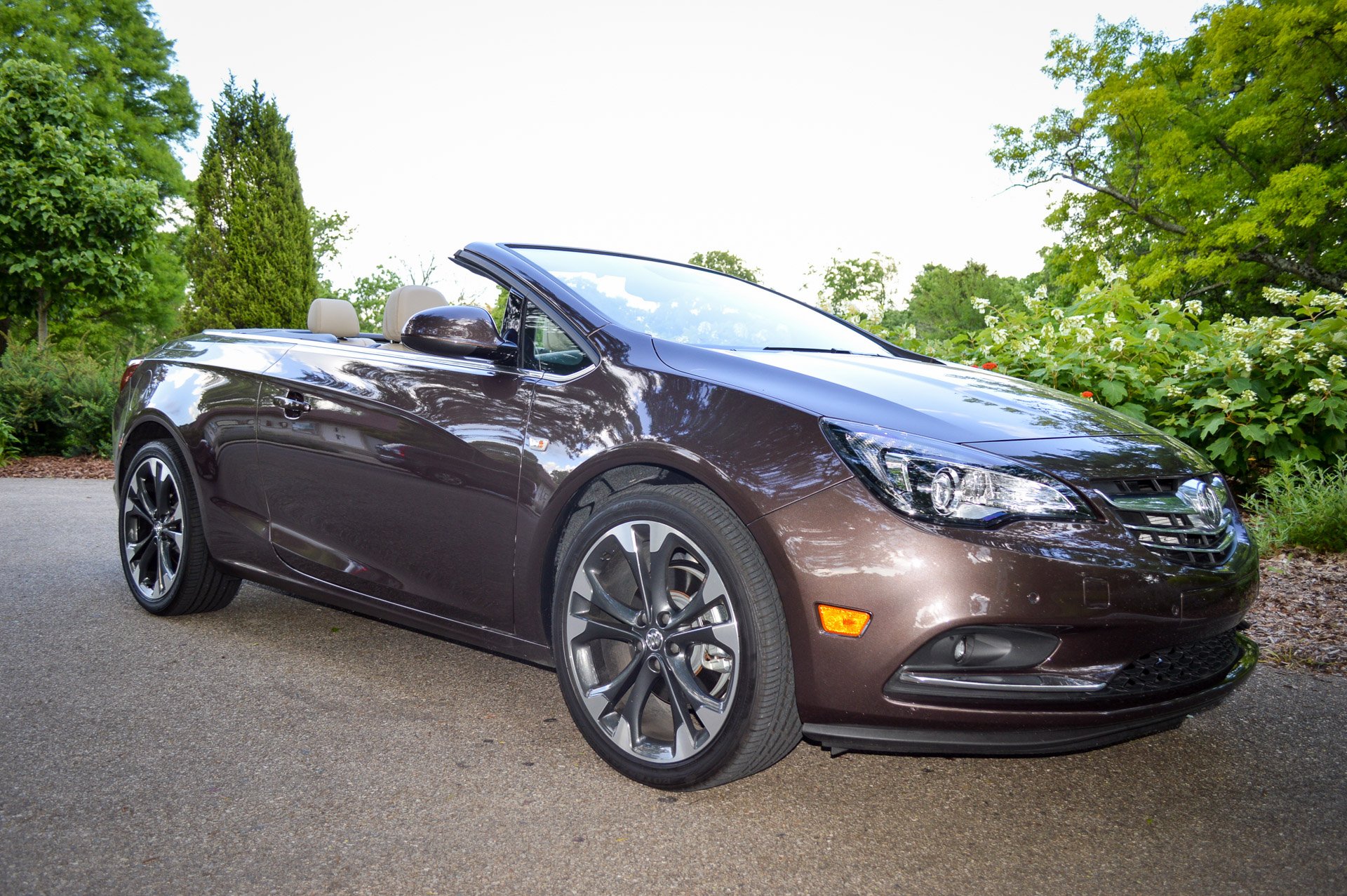 Frankly, today’s automotive marketplace offers few choices when it comes to drop-tops. Cruising convertibles for four passengers are particularly rare these days. The days of going for a drive, with no place to go, the top down and the wind in your hair are few and far between.

And for those of us like me, who have a love affair with convertibles, it’s sad to see so few options. So, needless to say, I was quite excited when I saw the Buick Cascada unveiled two years ago at the Detroit Auto Show. First, it was a new offering from Buick, a brand that’s trying desperately to shake its dusty reputation. 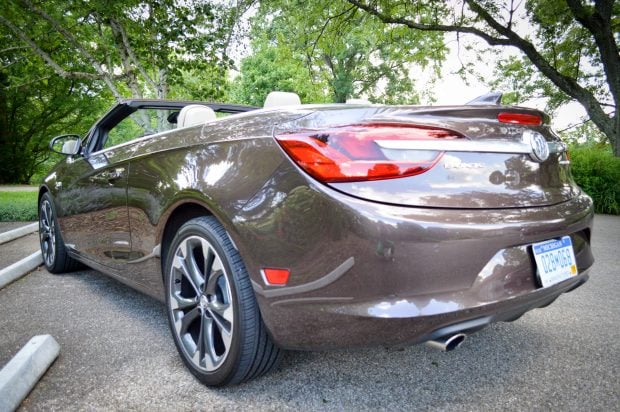 A closer look at some of the newer vehicles from Buick shows that they are in touch with their younger side and offering excitement for more than just those who are approaching retirement. And certainly, the Cascada fits the mold as it has mass appeal. 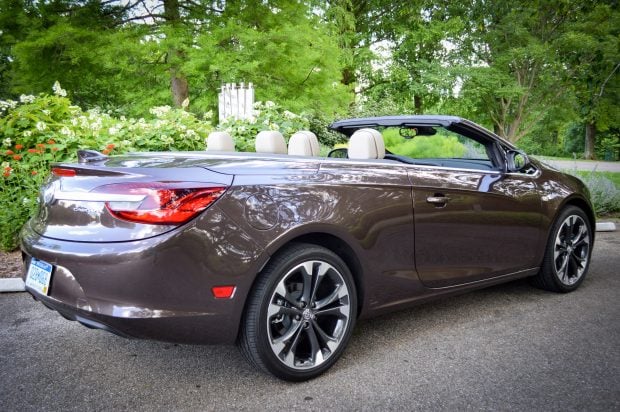 It will work for a young executive who loves the open road and a convertible, but it will also work for a retiree who has the warm fuzzies for the golden age of convertibles. In truth, the Cascada fulfills both of those fantasies. 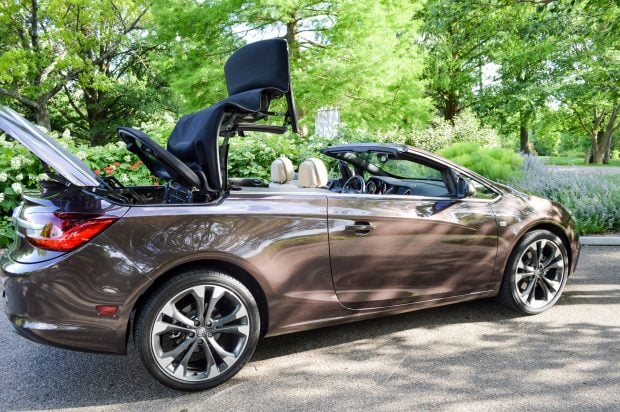 The Cascada is a 4-person convertible. Unlike convertibles of days gone by, the Cascada can open or close the top at speeds up to 31 mph. That is a great feature in a convertible, especially for those who live in finicky weather areas. No longer do you have to pull over or slow to a crawl to close the roof.

The Cascada is molded after its European counterpart at Opel and that’s a good thing. It does have some European flare to it including a smaller, subdued grille with sleek headlights. Indentations on the hood offer a streamlined look and seem to flow with the rest of the car. The angled A-pillar is sharp and distinctive and that triangular window really holds the entire look together. That fixed window works to shield road noise and offer a better view of the road. It also helps with the overall exterior appearance of the Cascada. 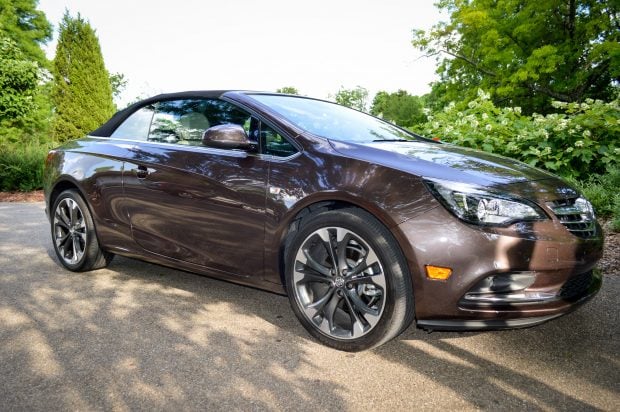 Turbocharged 4-cylinder engines are a hot trend, so of course Buick dropped one in the Cascada too. There’s a 1.6-liter turbo in the Cascada which makes 200 horsepower and 207 lb-ft. of torque. Those power numbers would be good for a roadster, but for a bigger, heavier car like the Cascada, it feels slightly underwhelming.

The measured 0 to 60 time is 8.6 seconds which is quite slow. It seems that a small engine, even a turbocharged one, can’t keep up with a vehicle that weighs nearly two tons. And that’s really a shame because the Cascada, with a reduction in weight, could be as fun to drive as something like the Miata. But it’s not currently. With the top up, there’s nothing exciting about it. Only with the top down, do you enjoy driving the Cascada, thanks to the wind in your hair and the open road. 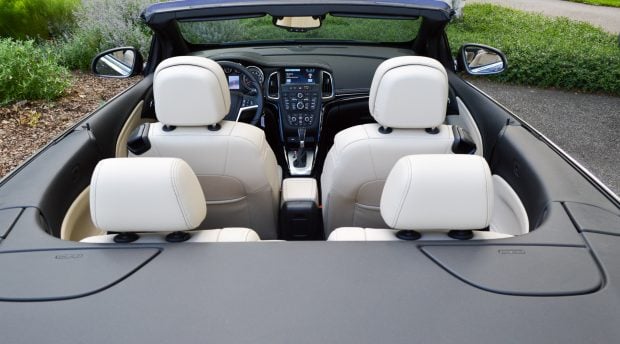 Inside, the Cascada is everything you expect from a Buick. High-quality materials, a well-organized interior and soft touchpoints are some of the highlights. My tester was Toasted Coconut on the outside and Jet Black on the inside. There was white accent stitching that ran all along the dashboard. The heat-reflective leather seats were incredibly soft and offered a comfortable driving vantage point. The two-person back seat lacks legroom for most adults, but is adequate for short trips or children. 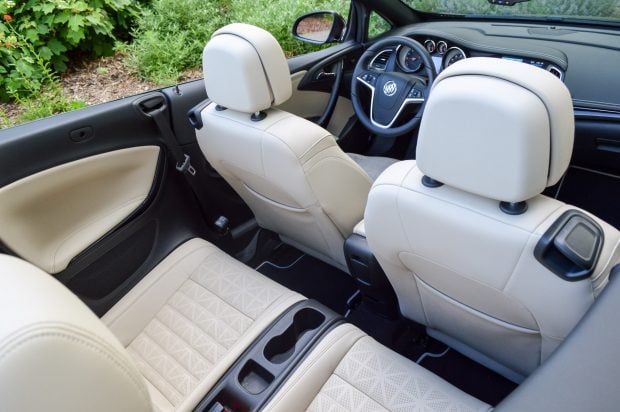 The single most overwhelming and frustrating feature inside the Cascada is the center stack which has a dizzying array of buttons and knobs. There are three tiers of knobs and buttons that all do different things and each tier has multiple rows and columns of various buttons. It is way over engineered and too confusing. It also clutters up the otherwise clean interior of the Cascada. 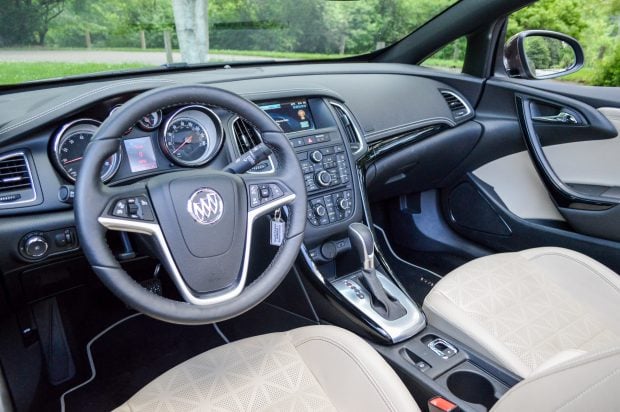 The busy center stack detracts from the cool technology that exists on the Cascada. Through a 7-inch diagonal color touch screen, there are many smartphone-enabled features including Siri Eyes Free and Voice Text. There’s also a subscription-based 4G LTE Wi-Fi hotspot.

Convertibles are not known for their trunk space. With the top up, the Cascada has 13.4 cubic feet of space, and the rear seats fold 50/50 to allow for cargo pass through. With the top down, the trunk space drops down to 9.8 cubic feet which is more than other convertibles. The innovative way the top opens and closes with a three-part mechanism allows for this amount of space, as well as the opening/closing to occur while in motion. 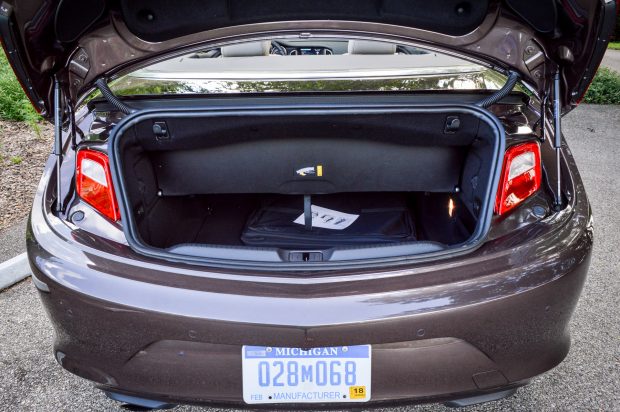 Bless GM for making the Cascada simple in regards to trims and options. There are only two trim levels, the Base 1SV and Premium 1SP. My tester was the premium-level which adds automatic wipers and sensor-based technology like collision alert, lane departure and parking sensors. Retail price for the 1SP trim is $36,065. Add in the extra cost of the very elegant-looking Toasted Coconut paint and destination charge and my tester had a final MSRP of $37,385.

The Cascada is only available in front-wheel drive and both trims have the same fuel economy. The Cascada has an EPA rating of 20 mpg/city and 27 mpg/highway. In a week’s worth of driving I averaged 24 mpg. 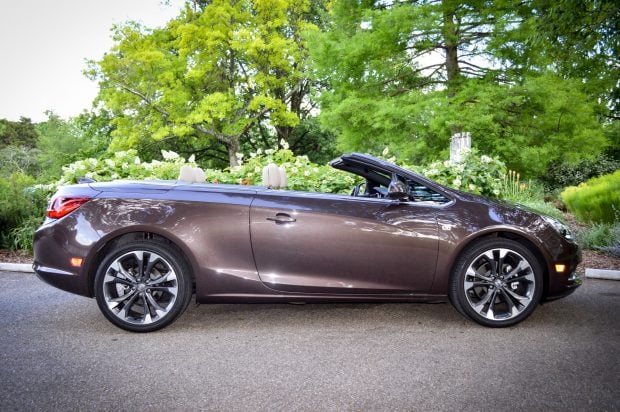 It’s hard to say if the Cascada will help restore a youthful reputation to the Buick line. What it will certainly do is help those with fond memories of long drives in convertibles wax sentimental. The Cascada is a throwback to the glory days of the automobile when driving was fun and not just purposeful. On a nice sunny day, you put the drop top down and let a little wind therapy provide your entertainment. In that regard alone, the Cascada hits the mark.