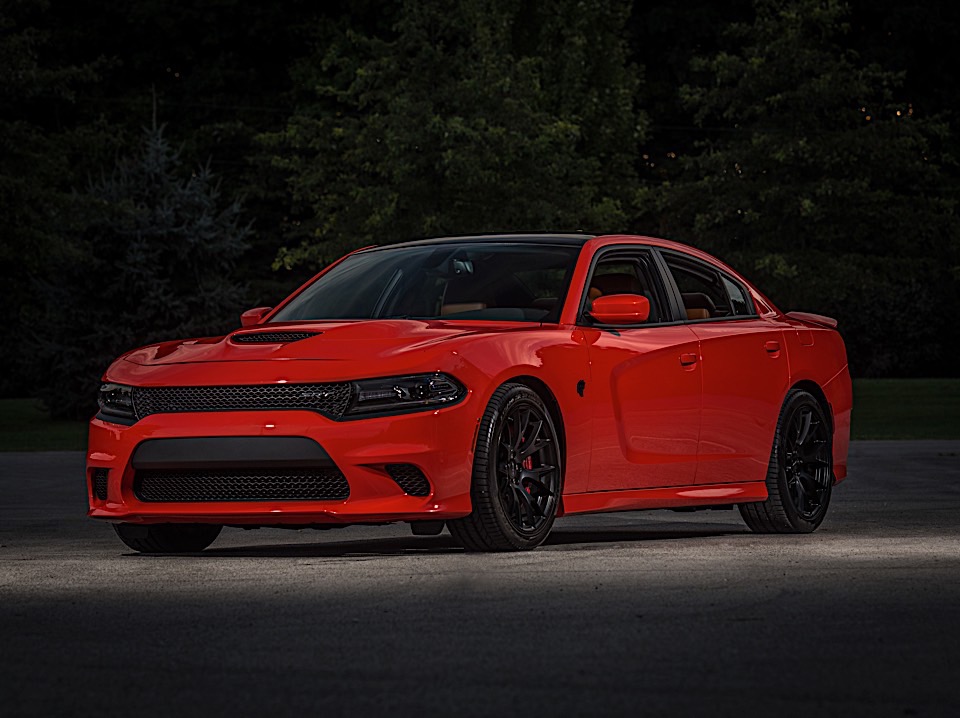 “The most powerful production sedan in the world.”

Let those words sink in for a moment. Of all the cars in the world that have four doors, this Charger from Dodge has them all beat. It doesn’t matter if the manufacturer is Mercedes-Benz or Rolls Royce, they’re all less-powerful than this Dodge. We truly do live in the golden age of the muscle car.

Spending any time with the 2016 Dodge Charger Hellcat is an experience. From the moment you press the start button and hear it growl to life, you’re immediately in love. It’s raw. It’s visceral. It’ll wake the neighbors in the morning. You’ll be using the remote start all the time because you want to hear it start from outside the car. The Hellcat changes you. 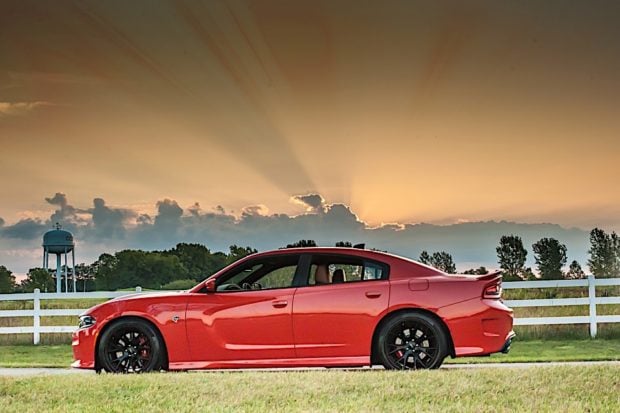 If there ever was a car that would make you feel like a 12-year old again that costs less than $200,000, this is it. It’s a car that produces giggles just by squeezing the throttle. Press it all the way to the floor, and you’ll be laughing diabolically all the way until you go to jail. It’s incredibly fast. Nobody has any business owning a car with this much horsepower.

That’s what makes it awesome! What also makes it awesome is how livable the car is day-to-day. It’s a Charger. That means there’s plenty of room in both the front and back for adults. Supple Laguna leather cossets you on long drives, while appropriately bolstered seats hold you in place. The trunk is big enough for stuff and things.

The luxuries continue with heated and cooled seats with heated rear seats. Blind spot monitoring and a rearview camera help you see. The latest version of Uconnect supports Siri Eyes Free, and is still one of the best OEM systems in existence. 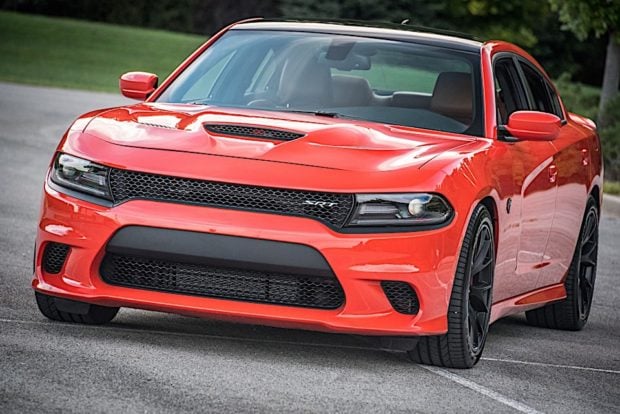 Plus, for some, it benefits from having an automatic transmission. The ZF-sourced 8-speed automatic is smooth in normal driving, and absolutely diabolical in the Track setting. A full-throttle upshift in the car’s track setting lets out a loud crack that sounds like a .50 caliber round going off.

Really the noises are part of what makes this car special. The supercharger has a whine that just screams when you get on it. The exhaust bangs and pops and burbles like the best muscle cars. It even makes a delicious popping noise on the overrun. It’s a lot like the Jaguar F-Type in this sense, but doesn’t sound as refined.

When you aren’t driving like a lunatic – which is difficult not to do – it’s refined and quite civilized. There’s absolutely nothing scary at all about driving this car. It doesn’t feel like it’s flimsy or about to break apart at the seams. Where a previous-generation Shelby GT500 felt like it was always at the limit of what’s possible, the Charger Hellcat drives tame and sedate. 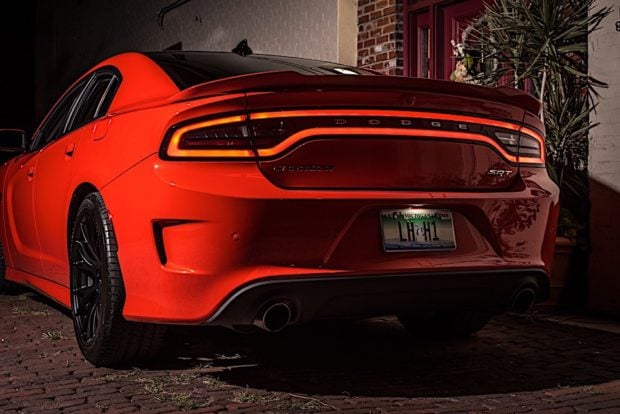 As long as you keep your foot from going to the floor all the time, you’re perfectly fine driving it. In fact, it’s easy to get 24 miles-per-gallon or more in real-life driving if you are careful with the throttle application!

If you want to be economical, there’s an Eco setting which limits power to 500 horsepower and sets the rest of the car up for the most fuel-efficient driving possible. It’s funny to think that 500 horsepower is considered economical, when many cars don’t make that much power in the maximum-output setting! 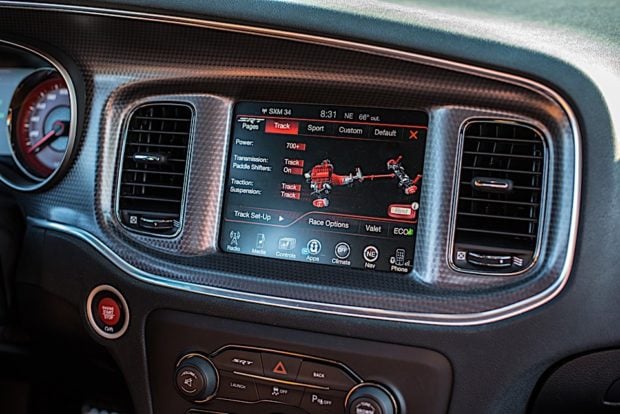 If you head to the track, there is a track setting that stiffens up the dampers, quickens the shifts, tightens the steering, and improves throttle response. It also cuts way back on the traction control so you can easily get the car sideways. It should be noted, though, that 707 horsepower is capable of bullying even the most intrusive traction control.

Finally, there’s a Valet mode if you have to let someone else drive your car. It limits power output to around 200 horsepower, making the car no more powerful than a compact sedan. It’s secured with a 4-digit PIN so that a valet can’t unlock it. 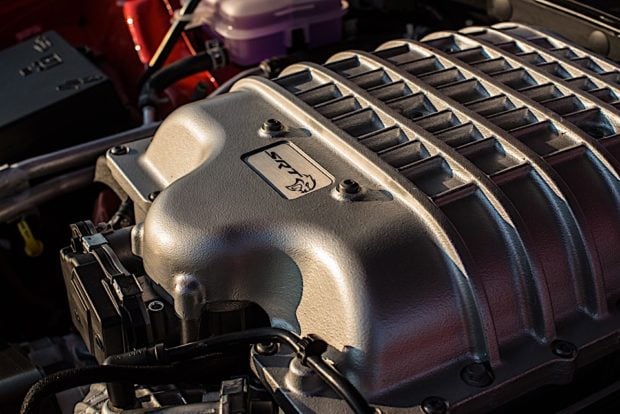 The car is not without faults. While the seats are excellent, the rest of the interior isn’t as nice as the interior you’d find on other $70,000(USD) cars. Also, you do have to run premium gasoline. I suppose if I were nitpicking I’d want a wider set of rear tires for more grip.

But the truth of the matter is this; I love the Hellcat. The Dodge Charger Hellcat is nearly the perfect car. It’s fast. It’s practical. It makes me laugh every single time I turn on the ignition. It’s sillier than the Challenger Hellcat because Dodge hides the Hellcat lunacy behind the sheetmetal of a 4-door sedan. It’s bonkers in every single way.

I absolutely adore it!