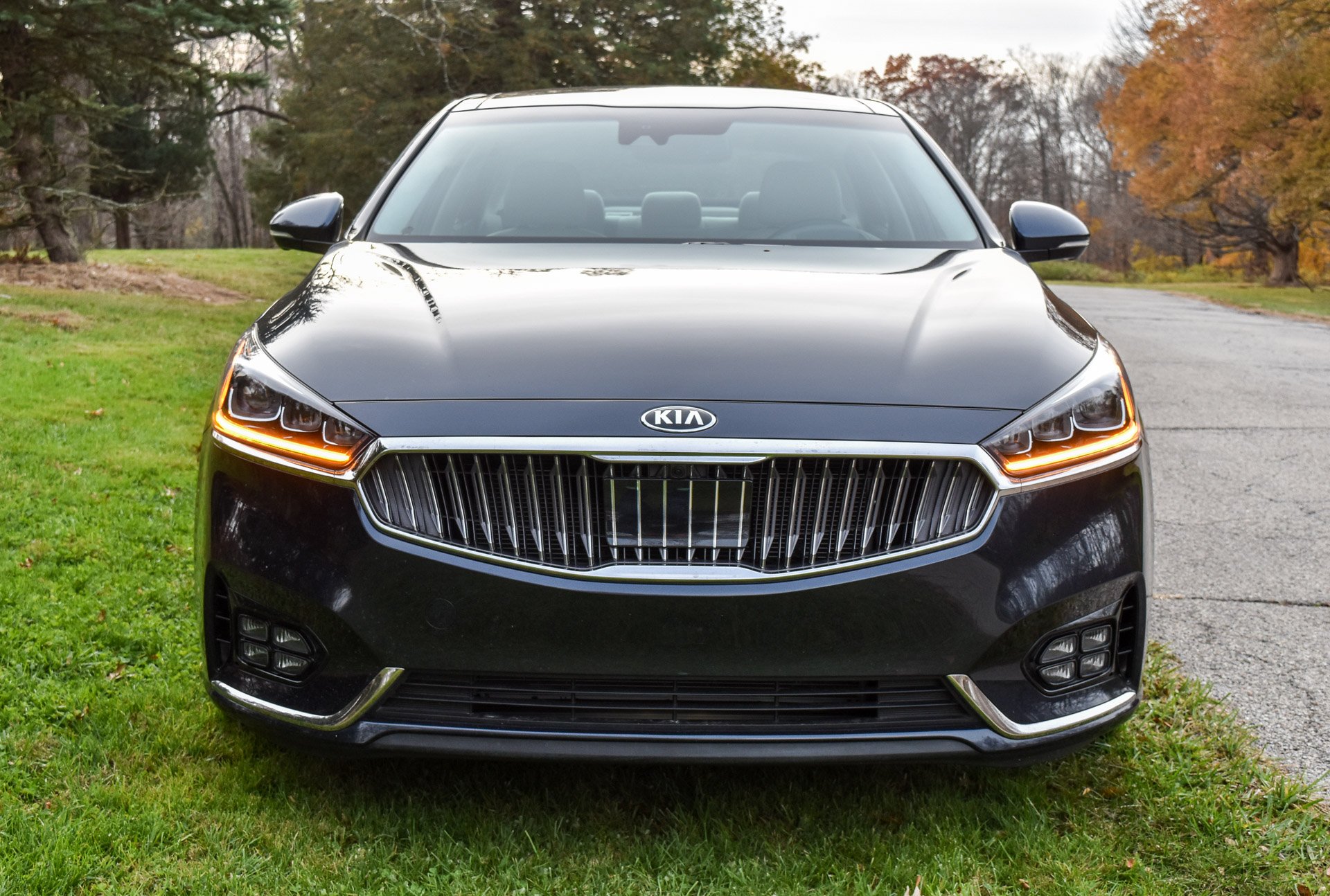 Kia boasted a record sales year for 2016. Most of the 3.5% increase in sales volume can be chalked up to their smaller cars including the Forte and Soul. This leaves my tester this week, largely overlooked – sadly. The 2017 Kia Cadenza deserves more respect and attention, especially after a major redesign.

It’s true that large sedans are a dying breed. But don’t hold that against the Cadenza, which is one of the most luxurious full-size sedans offered today (that isn’t officially called a luxury vehicle). There are so many standard features and quality touch points to this Kia it could easily be mistaken for a Lincoln or Lexus.

And that’s the niche the Cadenza fills – those who still want a larger car instead of a small crossover and those who want a car that does equally well as a weekend runabout or a daily driver. The Cadenza fulfills all of that and does so with distinction and refinement. 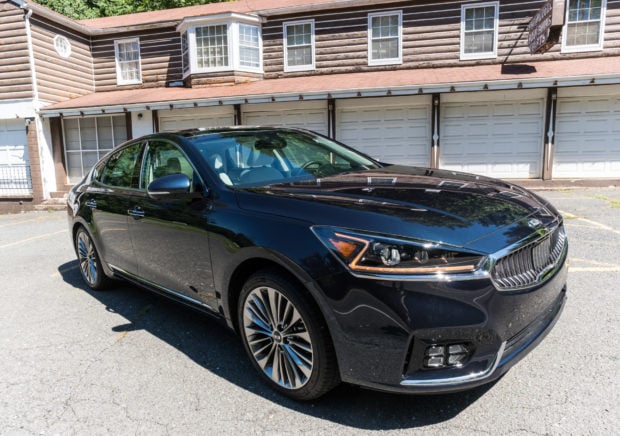 Just three years from its debut, the second-generation Cadenza boasts a significantly changed exterior. A quick glance at the Cadenza and you’ll mistake it for a luxury European brand. The understated grille is elegantly situated between the new, sexy LED headlights. The Cadenza is more sophisticated than aggressive, but that doesn’t detract from its overall appeal.

The curvaceous backend continues the understated elegance with a long sloping C-pillar that seamlessly blends into an integrated trunk spoiler. Dual exhausts in the back indicate the powerful nature of the Cadenza’s engine.

Despite the redesign, the 2017 Cadenza returns the 3.3-liter gasoline direct-injected V6 engine from the previous generation. The smooth, refined performance of this engine is typical for the large sedan segment, but doesn’t offer much in the way of excitement. There’s ample power on tap with 290 horsepower, and the new eight-speed automatic transmission is flawless. The Cadenza has an EPA rating of 20 mpg/city and 28 mpg/highway. This is average fuel economy within the segment. In a week’s worth of driving, I averaged 23.9 mpg. 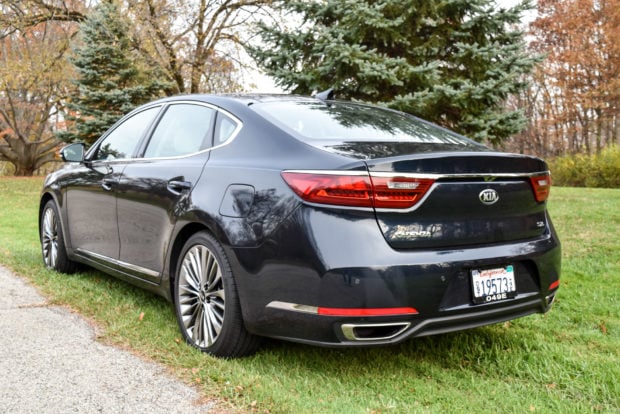 The addition of paddle shifters does add some enthusiasm to the overall sleepy performance of the Cadenza.  When compared to other large sedans, the Cadenza doesn’t stand out in the performance department. Acceleration is adequate, but off the line it feels less powerful than a similarly-powered V6 Chrysler 300. Perhaps an upgraded engine with a little more oomph is in store and can inject a bit more driving excitement into this otherwise excellent car.

Inside, the Cadenza really separates itself from most other Kia vehicles and certainly falls in line with other large luxury sedans. My tester had White Nappa leather seats that were elegant. The diamond stitched seats were not only comfortable, but absolutely stunning. The interior of the Cadenza is so well done with refinement and luxury, it’s hard to believe that it has a price below $45,000. 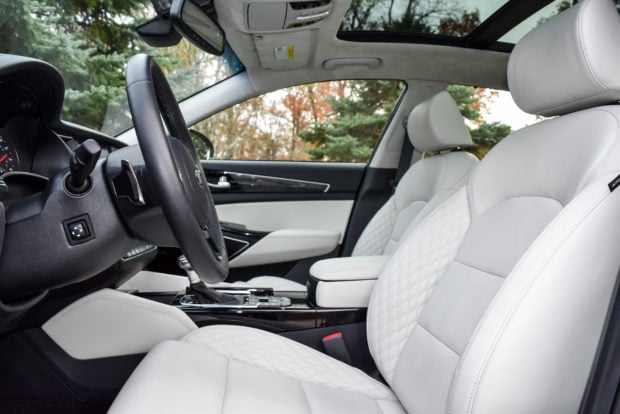 The leather-clad back seat has ample legroom. With the slope of the roofline, however, rear headroom feels limited. Additionally, the angle and length of the C-pillar makes for a nasty blind spot for the driver. Thankfully, the Cadenza comes standard with blind-spot monitors. 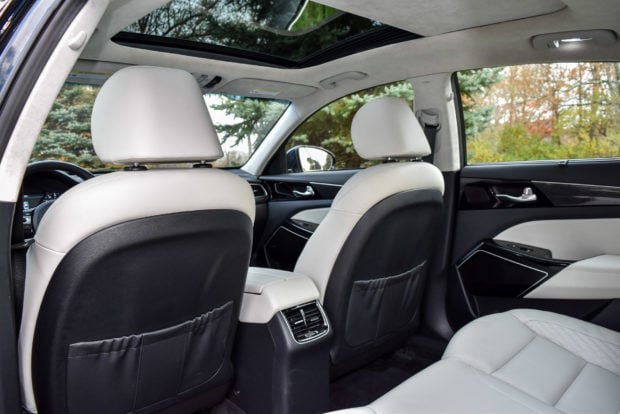 Overall, the aesthetics of the interior are as nice as you’re going to find for any non-luxury brand, but it needs some improvement in the area of noise, vibration and harshness (NVH). There were several rattles from the center console and rattles from the door panel that you wouldn’t otherwise find in a luxury car. Additionally, despite its overall refined performance, the ride could’ve been smoother. It may look like a Buick but didn’t offer the soft-riding performance of one.

The panoramic moonroof adds an elegant vibe to the interior. Normally I’m indifferent on the merit of moonroofs but in this car, it felt right. 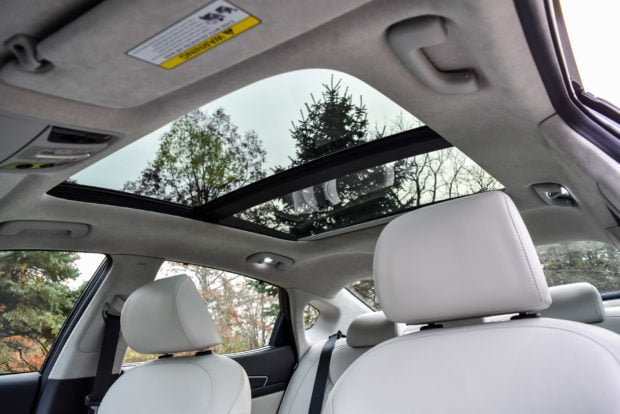 Trunk space is disappointing. At only 16 cubic feet, it’s in the middle of the pack for its segment, but with the slope of the back end, the opening for the trunk is limited. There is a smart trunk entry, where as long as you have the key fob with you, standing at the rear of the car opens the trunk. This is a handy, although not uncommon feature these days. 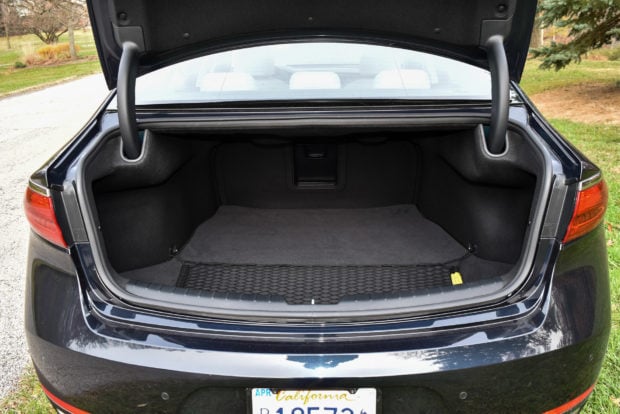 The head-up display is noteworthy. It’s rare when I write more than a sentence on a HUD, but the Cadenza’s version had all kinds of well organized, and well-lit information in it, including turn-by-turn navigation and a blind spot indicator. This was the first time I had seen any blind spot monitors displayed in a HUD, though it’s starting to show up on other brands. It was an intuitive position for it.

The 8-inch touchscreen uses Kia’s Uvo infotainment system. This is an adequate system that is intuitive to use although is burdened with a few too many buttons. The latest generation system has Apple CarPlay and Android Auto to help integrate with smartphones and devices. My tester, the top-of-the-line Limited trim also has a 12-speaker Harmon Kardon sound system. 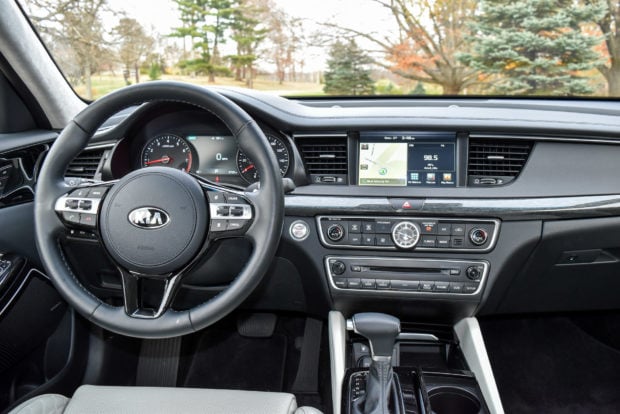 The Cadenza is available in three trims: Premium, Technology and Limited. The Premium trim starts at $31,990 and includes leather, dual-zone climate control and the aforementioned proximity key. The Technology trim has a starting price of $38,990 and adds a heated steering wheel, LED headlights, and adaptive cruise control. The top-of-the-line Limited trim starts at $43,390 adds Nappa leather, heated rear seats, and that impressive head-up display. The moonroof is also standard on this trim as are rain-sensing wipers and power-adjusted rear window shade. 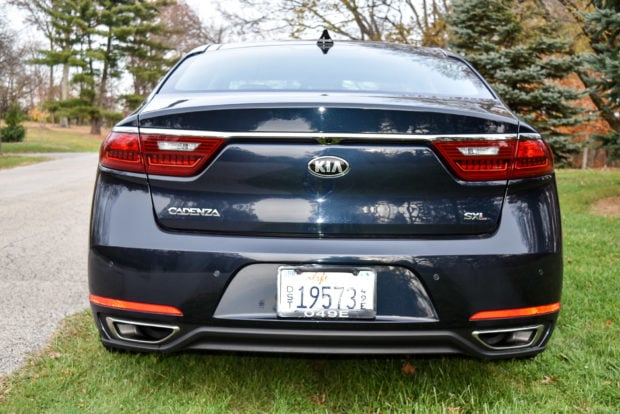 Kia continues to thrive, offering smaller cars that resonate with the American consumer’s thirst for maximum value for minimum price. The full-size Cadenza also follows that same mentality offering luxury-like amenities and quality with a refined, yet fuel efficient performance. Though the refinement sometimes downplays the overall appeal of this full-size sedan, the Cadenza is certainly much improved from the previous generation. Keep it up Kia!