Dashing Through the Snow in the AWD Dodge Challenger GT 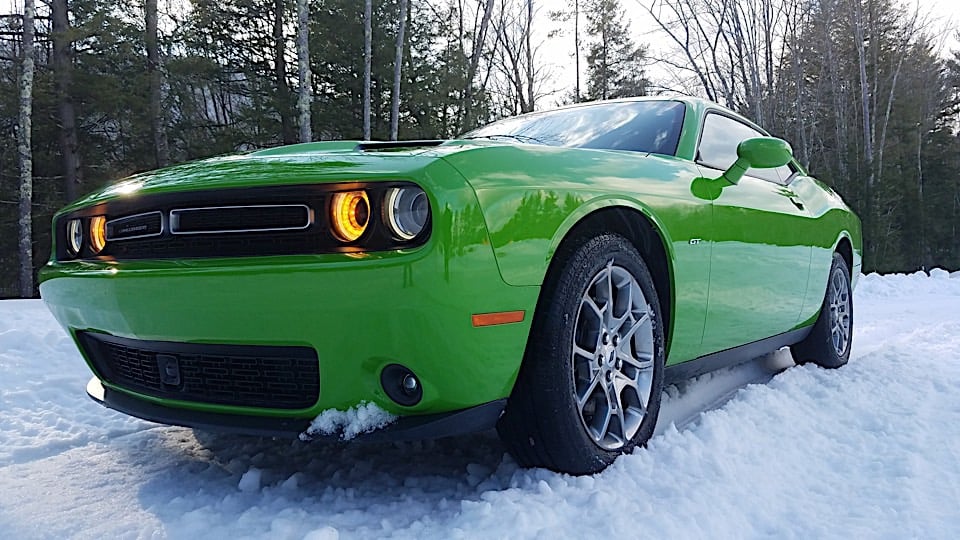 Let’s cut to the chase. If you’re buying a V6 Challenger for whatever reason, and you live in a part of the country where it snows, this is now the base Challenger to buy. The rear-wheel drive shouldn’t even be a consideration for you.

The 2017 Dodge Challenger GT is the V6 Challenger mated to an all-wheel drive system. It’s a sophisticated system that Dodge uses on other vehicles, where it can electronically disconnect the front axle for fuel economy but seamlessly engage it for power when necessary. 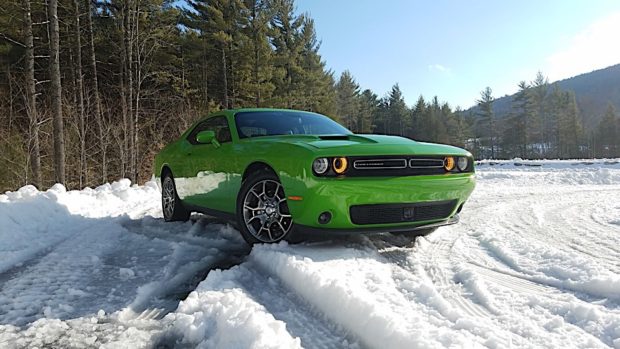 In the Challenger GT it’s tuned for performance. The moment you enable the Sport mode the all-wheel drive system is locked on. Despite that, it still behaves like a rear-wheel drive car with most of the power biased out back. But when you start to slide, the power shuffles up front to help you out.

That’s the whole premise of the Challenger GT; to make a sporty V6 Challenger. In addition to the all-wheel drive, which is the main story, other changes were made to the car to up the fun. 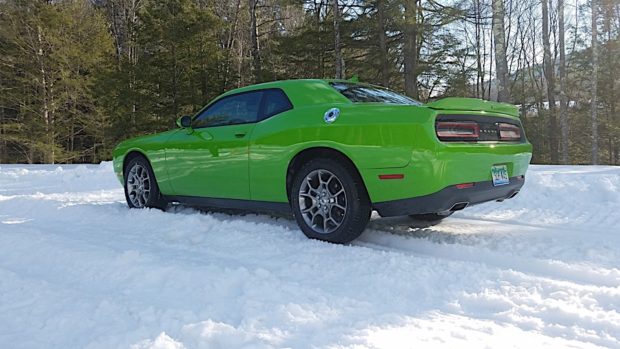 The Challenger GT started life with the suspension from the Charger Pursuit. It’s a stiffer setup than what comes on the normal V6 Challenger, and helps eliminate some body roll in normal cornering situations on normal roads.

To accommodate the all-wheel drive, the car is less than an inch taller than the normal V6 Challenger, and the curb weight increases by about 200 lbs. All of that weight is not in the all-wheel drive system, since the Challenger GT has bigger wheels and larger brakes, both accounting for the extra increase in heft. Big car is big, but the stiffer suspension does help a lot there. 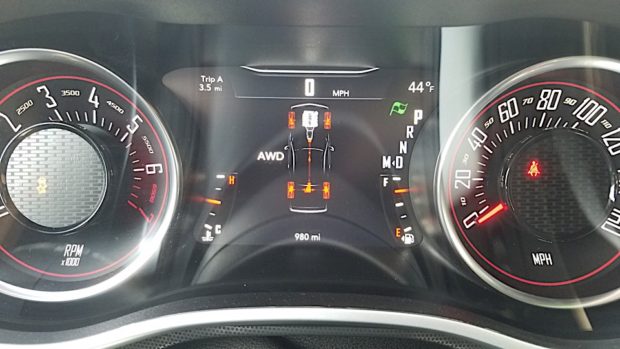 Power is sent to the sophisticated all-wheel drive system through the ZF 8-speed automatic. It’s a peach of an automatic transmission found in many FCA products, and it does well here.

So far, so good then?

Inside, there’s a new GT Interior Package that is a must buy and exclusive to the GT. You get the seats from the SRT models, plus a big chunky steering wheel that also feels like it’s lifted straight from the SRT. An upgraded Alpine stereo comes with it, but you’re not buying it for that, you’re buying it for the most comfortable seats in the muscle car segment. 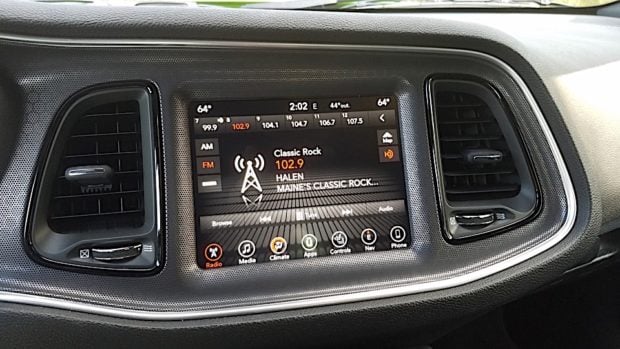 The new Uconnect is on hand with a gorgeous new, higher-resolution display for 2017 that also includes Apple CarPlay and Android Auto support. Dodge also intelligently includes those systems with the 8.4 inch screen, but you don’t have to buy Dodge’s navigation system.

The rest of the car inside is standard Challenger fare. You either are a fan of the Challenger or you aren’t. The materials feel nice for the price you pay for the car, though I’d prefer one of the brighter options than what was in our Sublime exterior tester with a black interior.

Well, it drives like a Challenger. On normal roads you really can’t tell a huge difference between it and a normal V6 Challenger. The suspension is stiffer, and on some of the frost heaved roads here in Maine where we tested the car it bounces around a lot. The dirt roads were smoother. 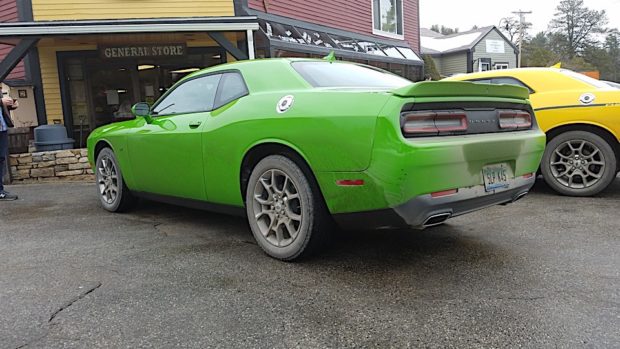 That wasn’t all due to the car, but the roads we were on. But when the roads get bumpy the suspension feels stiff. It’s the price you pay to get better handling, but it’s worth noting.

The car really shines when it gets slippery and you have a confidence that you don’t normally have in a car like this. On one of the dirt roads we drove to the racetrack, we were able to get traction when I know a rear-wheel drive car would have trouble. It definitely more like a rally stage than a road.

No winter drive couldn’t be complete with driving around a snow-covered autocross. There was several inches of snow on the ground, with drifts up to a foot or more. No, it’s not the worst snow I’ve driven in by far, but it was enough snow that the competitor cars that were brought for us to drive weren’t driven because they kept getting stuck. 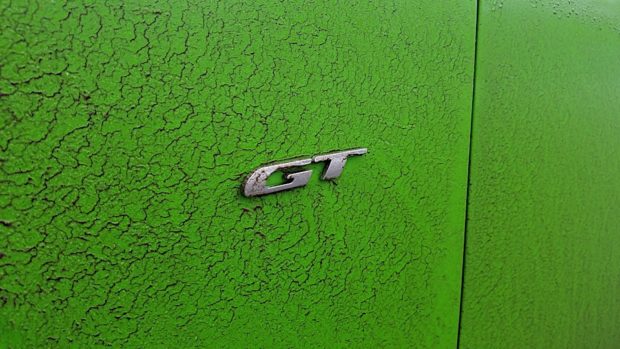 Riding shotgun with us on the track was a trainer from the Team O’Neil Rally School, so we were able to look like the novices we were in front of real professionals. But the guidance was great in learning how to handle the car in the really deep stuff.

It’s an absolute hoot to drive in the deep snow, and surprisingly Dodge didn’t equip winter tires for our trip. It carried the stock all-seasons that ship from the factory. That’s a lot of confidence knowing how well it works with those tires. Sure, if you live somewhere where you get a lot of snow, you’re going to want real snow tires, but this car does surprisingly well without them.

It’s also priced reasonably, too. It starts at $33,395 (USD) before the $1,095 destination charge. The standard equipment is greater than that on the base V6. Additional options are all around $1,000 and include the GT Interior Package, a technology package with adaptive cruise control and blind spot monitoring, an upgraded Harman stereo, and so on. All in, our test car rang the register at around $38,000. 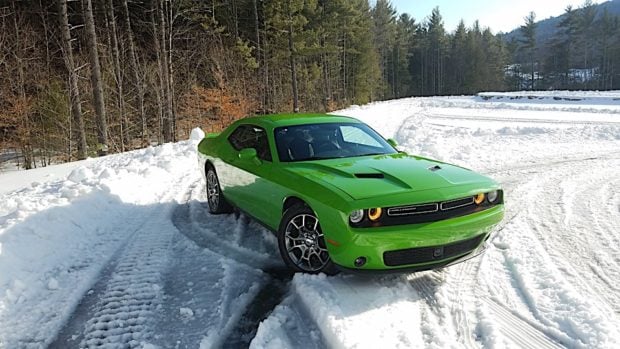 The car has sportier pretensions than the normal V6, and it delivers on most of them. My only real criticism is that I wonder if it could be a little sportier? The Pentastar makes plenty of power and is plenty smooth, but it’s almost a little too-refined, a little too-good for a big green muscle car. Does that make sense?

I have no reservations about recommending this car. If you want a two-door car with all-wheel drive that doesn’t break the bank, the Challenger GT is the smart pick. It’s got plenty of power. It’s extremely-capable. It has tons of options that you’ll appreciate every day.

I eagerly await the V8 version.