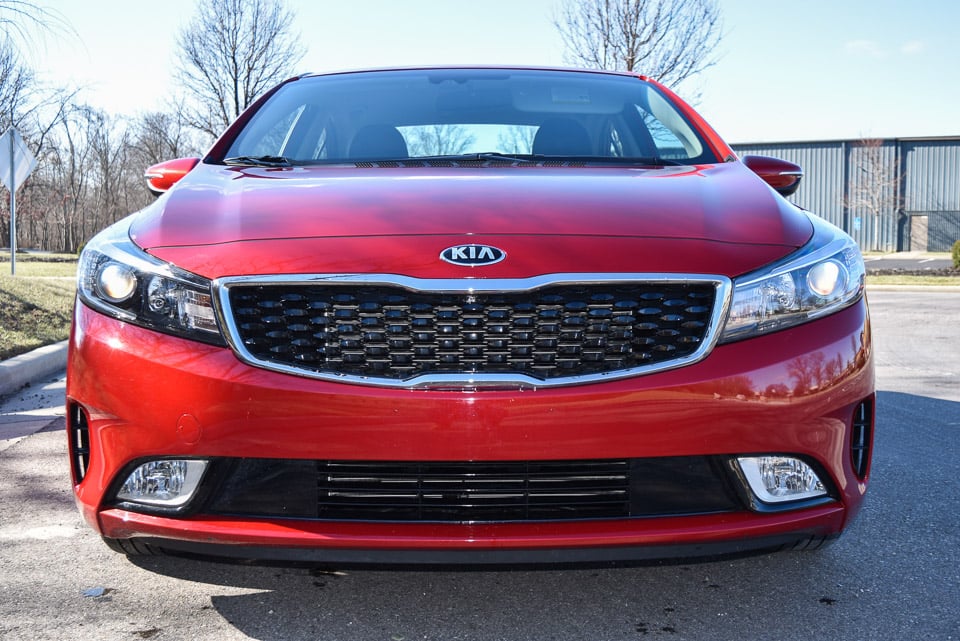 Spunky. Sporty. Superior. Superb. All words that begin with S, and all adjectives that could represent the new trim line offered by Kia in the 2017 Forte S. New for this model year, Kia adds the S trim which comes with a sport-tuned suspension and 16-inch alloy wheels as well as special upholstered seats with attractive white stitching.

Upon first glance, it doesn’t look that much different than the regular Forte, which also receives some refreshing this model year. A restyled front end for all trims is most evident. It’s subtle, but improves upon the looks of this compact car. New Xenon headlights help keep the Forte current with today’s auto trends. 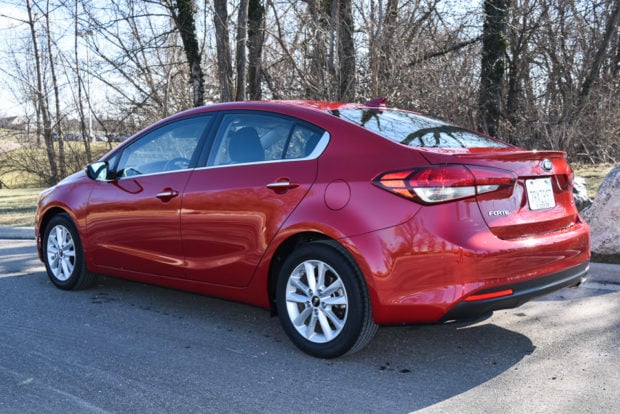 Side styling adds some distinction to the otherwise pretty conservative Forte sedan. All in all, the Forte is best suited as a hatchback, although as a sedan, the sloping and small C-pillar area gives the car a sleek look that leads to a sporty rear spoiler. The Forte doesn’t have head-turning style, but Kia continues to update its conservative compact.

Another way the Forte continues to evolve is with three different engines. New for 2017, the Forte receives a new standard 2.0-liter, 4-cylinder engine. This fuel-sipping engine may lack a turbo but it has enough pep to warrant the S (sport) trim. It makes 147 horsepower. The previous 2.0-liter engine, now only available in the EX trim has 164 hp, but worse fuel economy. There’s also a 1.6-liter turbocharged engine coming to the Forte SX that makes more than 200 horsepower. Certainly, for enthusiasts this would be a better option.

The Forte S’ automatic is stickered at 29 mpg city and 38 mpg highway. I averaged nearly 32 mpg in a week’s worth of mixed driving with a heavy foot. The more powerful 2.0-liter gets about 2 mpg less and the smaller turbo engine gets less fuel economy too. So, for the consumer concerned about fewer trips to the gas station, the Forte’s new engine hits the mark. Indeed, Kia is in touch with consumer who purchases a compact car like the Forte for the fuel economy, as well as for the maximum amenities they can get for such an economical price tag. 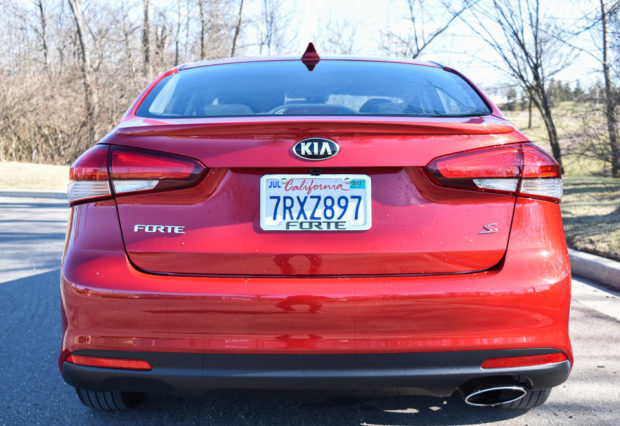 The big issue with the powertrain is the six-speed automatic transmission, which doesn’t do a great job. Many of today’s cars have more than just six gears, so a new transmission may be in store for the Forte, but hopefully they won’t drop a CVT into it.

Road noise gets a bit intrusive inside the Forte at higher RPMs and under heavy acceleration. Also, overall, the ride quality is a little on the firm side. The Forte S’s sporty suspension is intended to feel that way, so I overlooked it. There are three different drive modes that greatly change the drive performance. Regular, Eco and Sport modes affect the steering and transmission. For once, I actually prefer a vehicle in regular mode, instead of sport mode. In sport mode, the dated transmission seems outmatched with heavy revving.

If the outside is nice and the engine is okay, then the interior is where the Forte S really earns merit points. Inside, it’s surprisingly spacious, and the materials are of good quality for the price. Though it’s rated as a five-passenger vehicle, it’s best suited for just two adults and one child, or just two adults in the back seat. Headroom, shoulder room and legroom is fantastic in the back seat. Even with the slope of the C-pillar, the roofline doesn’t interfere for even taller passengers. It’s also got an above average 14.9 cubic feet of trunk space, though the hatchback version offers 23.2 cubic feet of space. 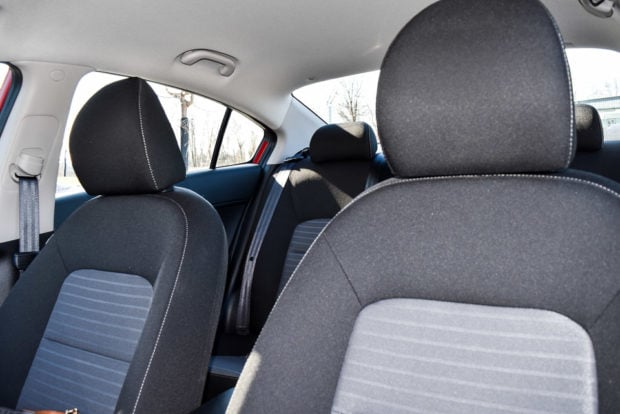 The Forte S has a leather-wrapped steering wheel and leather gear knob. The dashboard has softer materials and the center stacked is well organized and clean. 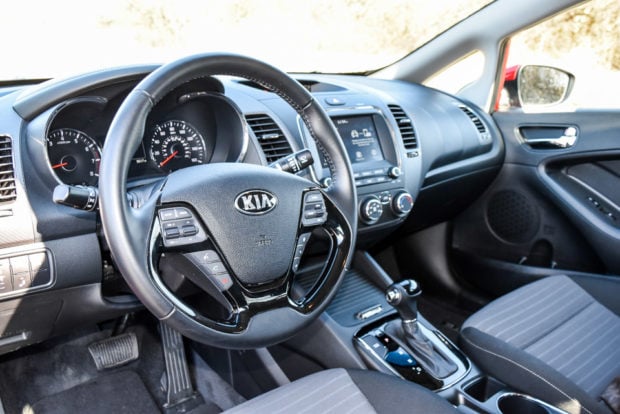 Anchoring the center stack is a 7-inch touchscreen. The infotainment system is easy to use and set up but is sometimes slow to respond to touch commands. There’s a good combination of buttons and knobs. Kia’s infotainment system now offers both Apple CarPlay and Android Auto integration too. The smartphone integration is smooth and easy and the system responds quickly and allows for some voice activated controls. You’ll also find two USB ports for connectivity. 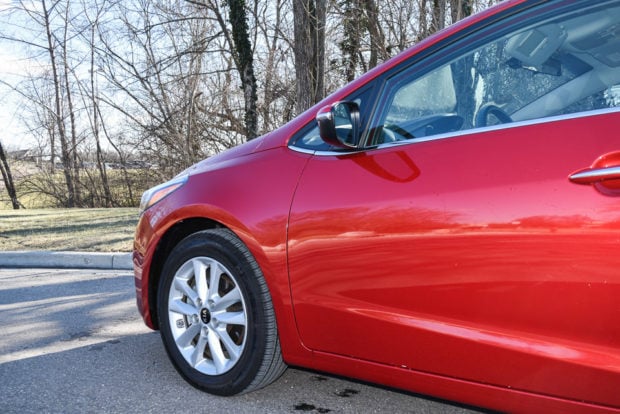 There are three trim options this year for the Forte sedan: LX, S and EX. In addition to the alloy wheels and sport suspension, the S comes equipped with special seats and the larger touchscreen. A 4.2 inch is standard for the LX trim, and I would imagine that would be incredibly small and clumsy to operate. LED running lights are also standard. My tester came with the S Technology package which includes forward collision warning, blind spot detection, lane departure warning and rear cross traffic alert. The outside mirrors have LED turn signals and there are fog lights and LED taillights with this package too.

Starting price for the Forte S is $19,200. My tester, with the technology package had an MSRP of $21,200. The base model Forte LX has a starting price of $16,600 making it one of the more price-friendly compacts in the segment and shows why the Forte is a top seller for the Korean car maker.

The Forte hits the mark as an effective, daily driver. Its diminutive size can help in the city with tight parking spots and parking garages. The improvements made, including adding a sport trim, help keep the Forte viable and exciting, and the new base engine is more fuel efficient. The 2017 Kia Forte S accomplishes what it sets out to do – which is add more value and a little more sportiness to the compact car segment.