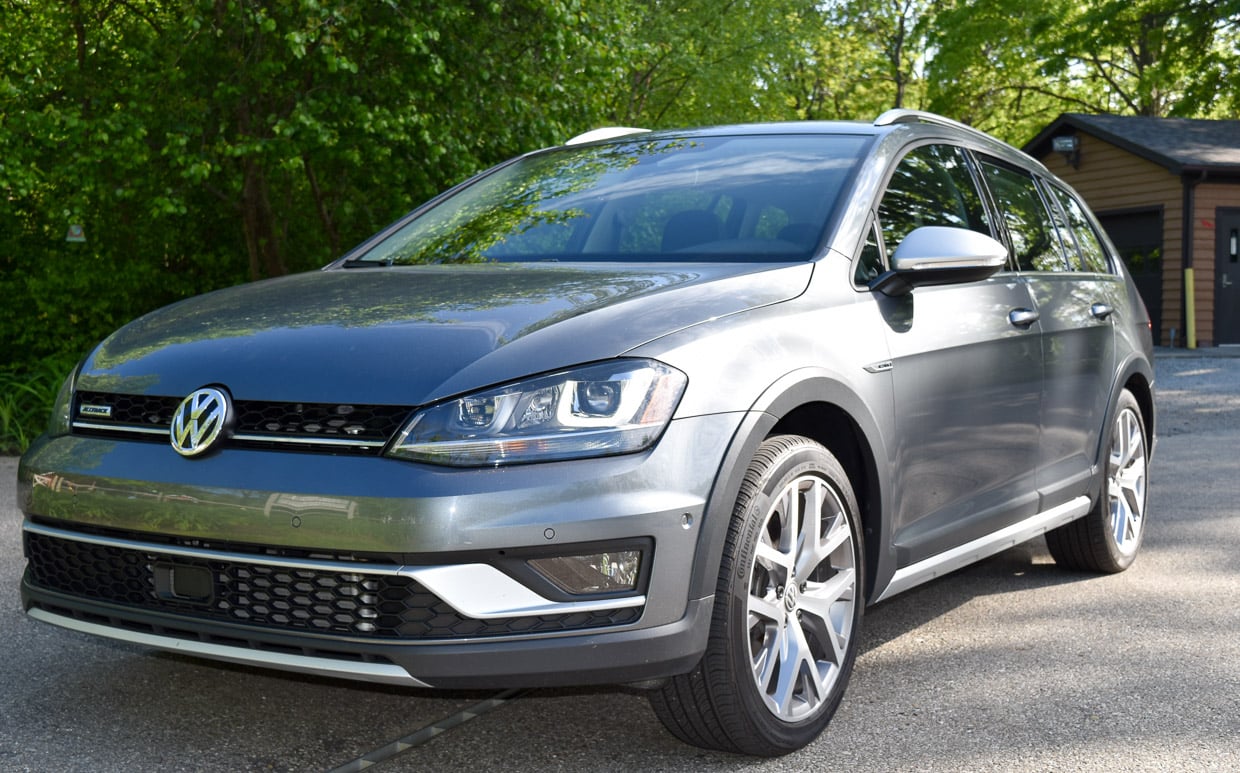 The Germans may spell it differently, but they know how to make a station wagon. The Golf has always been my favorite Volkswagen. It’s a fun, versatile car offered in so many different varieties. My tester this week was a variant of a variant of the Golf. VW makes a station wagon version of the Golf called the SportWagen, and the AllTrack is a version of that fun wagon. Regardless of the name or what it derives from, the AllTrack is a special car.

It takes the station wagon version of the Golf and then raises the ground clearance, adds all-wheel drive and a more aggressive exterior to create essentially a standalone station wagon that’s like nothing else on the road today. 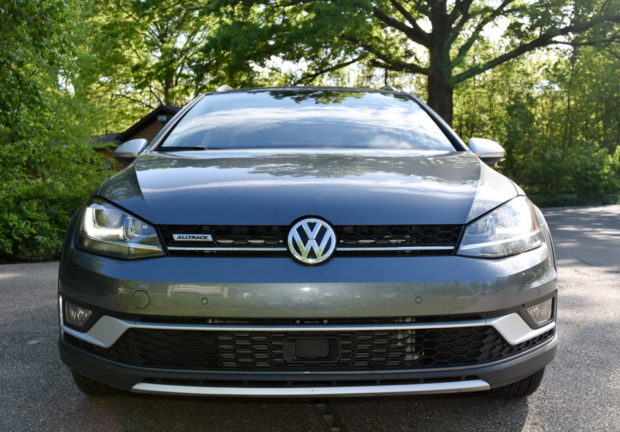 The AllTrack has few rivals, among them the Subaru Outback and the Volvo V60 Cross Country. But really the AllTrack stands alone with enough unique features and different look than these other wagons. The front end means business. It carries over some of the finer aesthetics of other Golfs. There’s a honeycomb-like embellishment on front bumper that carries into to the front grille. It’s not overly aggressive. It looks like a car from the front end, and doesn’t attempt to look like a rugged off-roader. The simple styling works well. Who needs excess styling when you’re going to get some mud on the bottom half of the car anyhow?

The back is more elevated and more wagon-looking. This is where the AllTrack becomes a spacious, family-friendly wagon. A rear spoiler adds a hint of sportiness to this car. The high C-pillar indicates the large cargo area inside and adds to the AllTrack’s versatility. 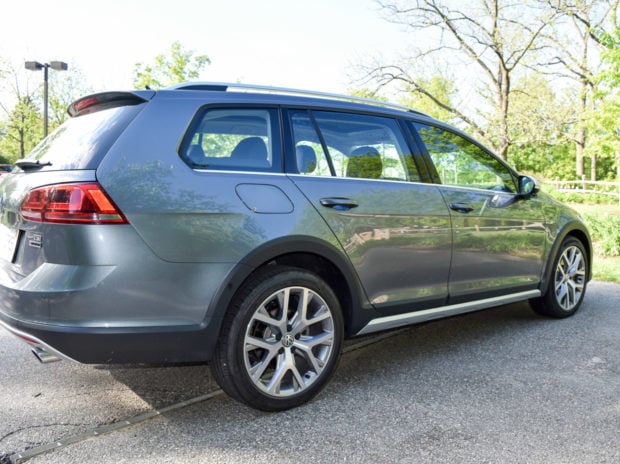 Unlike the regular SportWagen, the AllTrack has a turbocharged engine, but that doesn’t necessarily mean it’s as quick as other Golfs either. In fact, at more than 3,400 pounds, the 1.8-liter four-cylinder engine seems underpowered. 170 horsepower would be fine for a smaller, lighter car, but even with the turbo, it seems poky off the line. There’s some turbo lag as well. The AllTrack’s six-speed dual-clutch automatic transmission does a nice job with smooth upshifting. 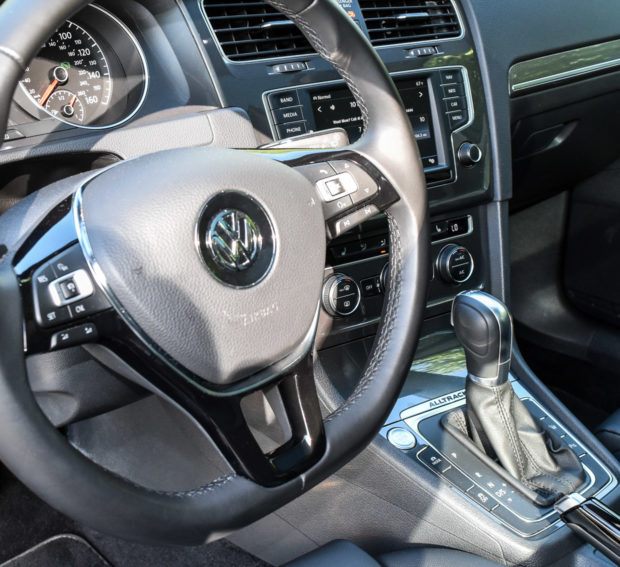 The AllTrack did well on fuel economy as well. It has an EPA rating of 22 mpg/city and 30 mpg/highway. Getting to that 30 mpg plateau helps add value to this station wagon. In a week’s worth of mostly suburban driving where I was in and out of the turbo, I averaged about 25 mpg.

Unlike other Golfs, the AllTrack proves ready to move off the pavement. There’s 6.7 inches of ground clearance (still a full 2 inches lower than the SUV-like Outback), and a raised suspension with underbody guard to make it even more off-road ready. An off-road drive mode makes climbing and descending hills easy. While there are certainly more rugged off-road vehicles, the AllTrack lives up to its name as it’s ready for all conditions, especially mated with Volkswagen’s 4Motion All-Wheel Drive. It wouldn’t hang with a Jeep or a Range Rover, but it would handle itself well in most conditions, which is one of the major perks of this car.

Inside, the AllTrack really sets itself apart from the Outback with its high-quality interior. Even though it may be ready to get dirty outside, inside, the Golf AllTrack is more refined. There’s a leather-trimmed steering wheel and heated leather seats. Three passengers will easily be comfortable in the cavernous back row, which has an incredible amount of head and leg room. However, some of the touch points in the back seat are not as nice as in the front seat, like on the door panels. But otherwise, the interior is high quality. 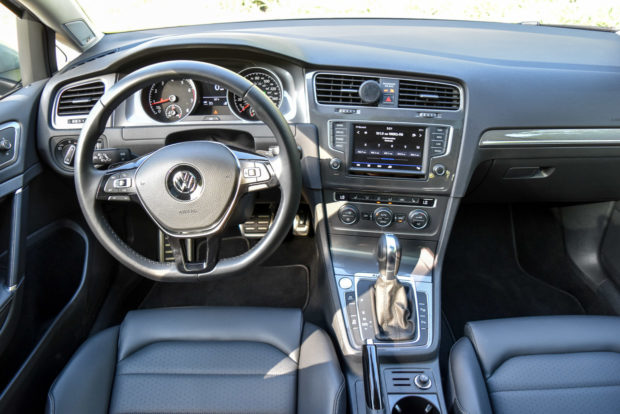 The AllTrack’s best feature is its SUV-like cargo area. With rear seats folded, there’s 66.5 cubic feet for carrying items. And even with them upright, there’s more than enough room for golf clubs, groceries or sports equipment with 30.4 cubic feet of rear cargo room. All hail the station wagon for its usefulness! It’s a shame that wagons have diminished in popularity as the AllTrack seems to make the wagon chic again. 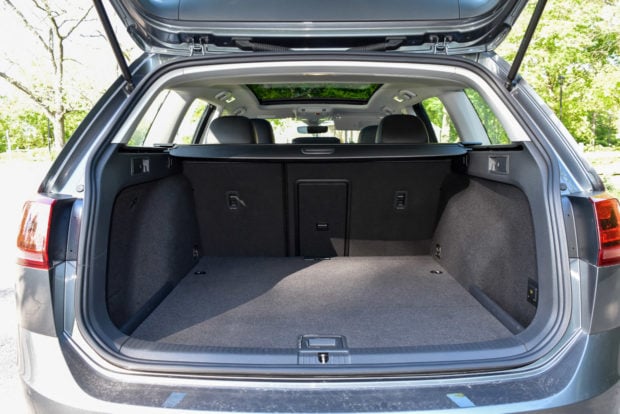 Volkswagen’s more luxurious counterpart, Audi has amazing technology. Unfortunately, that same tech isn’t found in the AllTrack. While the infotainment system does all you need it to do, the technology is cumbersome and lacks the modern, intuitive vibe of Audi’s systems. The graphics on the 6.5-inch touchscreen are dull and feel dated. The responsiveness to touch commands feels slow too. At least there is smartphone integration with Apple CarPlay and Android Auto, so that helps a bit with usability. The AllTrack is also equipped with Volkswagen’s Car-Net feature which is like GM’s OnStar system, offering app connectivity, emergency assistance, and navigation support. The Fender sound system provides nice audio quality, and helps keep some of the invasive road and engine noise down. Overall, the sound system is better than average and while the technology needs improvement, it seems nicer than what is currently found in the Outback.

Generally, most “rugged” cars like the AllTrack don’t tend to get loaded with the best technology and sound systems for whatever reason, with Land Rover being the notable exception. 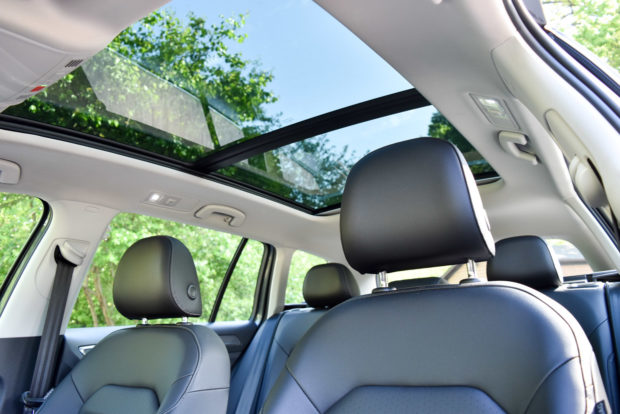 The AllTrack comes in three trim levels: S, SE and SEL. My tester was the top-of-the-line SEL which upgrades to 18-inch alloy wheels, a dual-zone climate control system, the Fender sound system, and upgraded infotainment features including an advanced navigation system. Also, the AllTrack SEL comes with a sensor-based Driver Assistance package that includes park assistance, Bi-Xenon headlights, lane departure warning, and park distance control system. This is a $1,995 add on to the SEL’s base price of $32,890(USD). The Alltrack is comparably priced to the Outback and less expensive than the luxury-minded Volvo. It also rivals other smaller crossovers on the market like the Ford Escape. 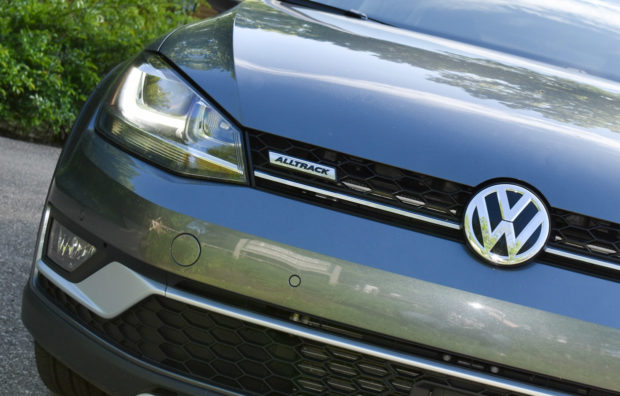 While I didn’t get to test the AllTrack in challenging conditions, I feel confident it will perform well in mud, snow and off the road. But it’s also a well-behaved daily driver, which makes it a chameleon of sorts. In AllTrack form, the Golf found a niche to fill, and does so very well.