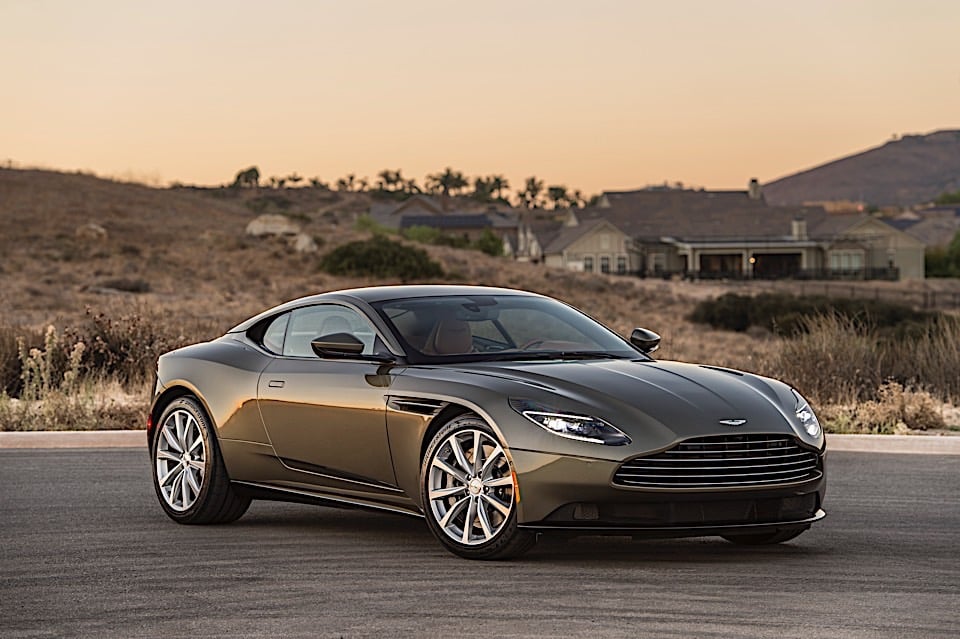 When James Bond orders his vodka martini shaken, not stirred, he’s actually ordering a watered-down drink. Why? Because shaking the mixture would chip the ice, and the smaller ice chips melt faster, watering down the drink. For 2018, Aston Martin added a V8 engine to the DB11. Did doing so water down the Aston Martin experience? I went to San Diego to find out.

The 2018 DB11 V8 has a 4.0L turbocharged engine straight from Daimler. Daimler owns 5% of Aston Martin these days, but that partnership gives Aston access to the entire Daimler parts catalog. That means the 4.0L V8 that appears in some Mercedes-AMG products also makes its way over to Aston Martin. 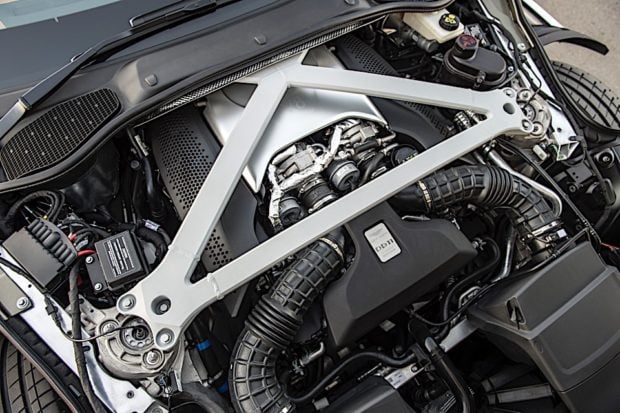 In Aston Martin-guise, the V8 makes 503 horsepower and 498 lb-ft of torque, and will top out at 187 miles-per-hour. While that’s down from its V12 sibling, it’s hardly a slouch. It’s mated to a ZF 8-speed automatic transmission with paddle shifters that have 50% less travel to work. The ZF 8-speed is brilliant in this car, like it is in practically every car that has the transmission. It’s not dual-clutch fast, but my brain can’t tell the difference and it’s way smoother in stop-and-go traffic. 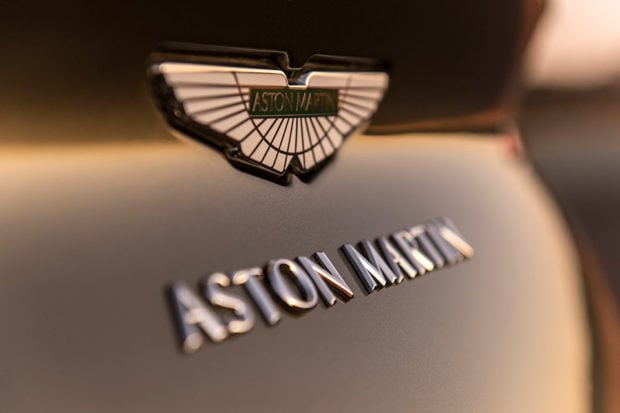 Switching to the V8 saves 250 pounds over the V12, and allows Aston to mount the engine completely behind the front axle. Combined with more aggressive tuning, especially in the sport modes, Aston believes that the DB11 V8 is more of a sports car and will appeal more to enthusiasts over the V12 bruiser. 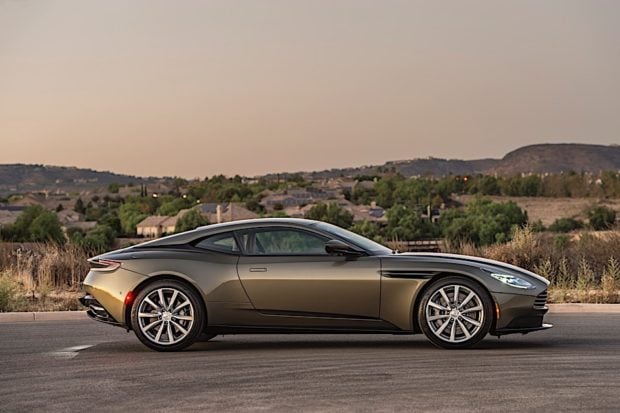 The DB11 V8 is comfortable in the GT setting, cruising down the highway at speeds way above the speed limit. It’ll do it all day without a hiccup. But when you get to long, fast sweepers – like the canyon roads around Borrego Springs – the car really comes to life. The exhaust makes all the great noises of a modern sports car. The suspension holds the car flat. The steering is precise. If you were to close your eyes, you’d be convinced you were in a sports car and not a grand tourer. 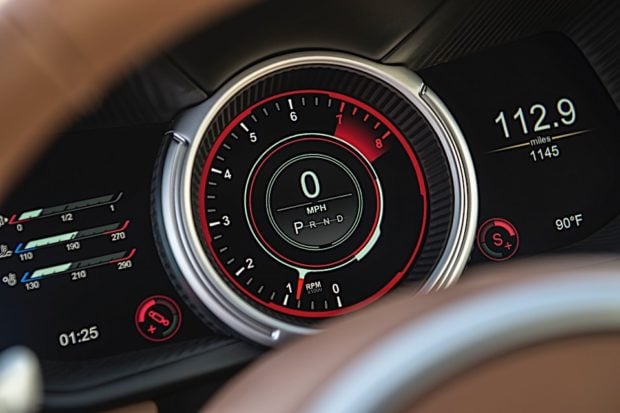 The DB11 V8 lets you choose from three driving driving modes that control the steering, throttle, exhaust and traction control. They are “GT,” “Sport,” and “Sport+.” Those three settings also exist for the suspension, but they’re controlled independently. That means you can have the engine in the loud setting with the aggressive gear changes, but still have the soft suspension for the really bumpy roads.

On the really tight switchbacks heading up a mountain, the DB11 V8 still feels a little big and a little heavy. But to be fair, on those roads I’d be happier in a dedicated sports car like a Miata or a Ferrari 488 GTB. The DB11 V8 is fast on the roads most people would drive it on, but also comfortable for a cross-country blast. 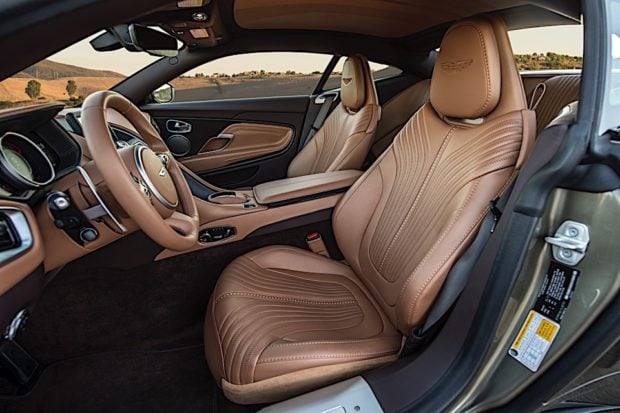 Inside, the car is all premium. The headliner is stitched leather. The wood is real, honest-to-goodness wood, that feels like real wood. The aluminum is aluminum. Apparently if you know about stitching, you can tell if the seamstress was left or right-handed.

The interior feels bespoke, but in a sporty way. The Rolls Royce Wraith might be more posh inside, but it doesn’t have sporty pretentions the way the Aston Martin does.

The Daimler partnership also allowed Aston to also improve their infotainment system. If you’re familiar with COMMAND in modern Mercedes-Benz products, you’ll feel right at home in the DB11. Why? Because it is COMMAND with Aston’s own skin on top. 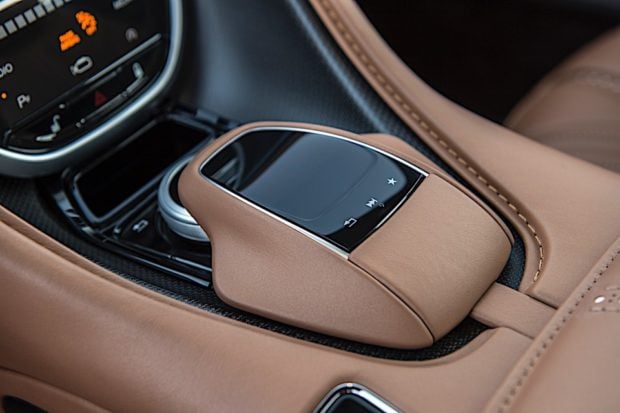 All of the inputs you’d expect are there, along with all the functions you’d want out of a modern system. Optional Bang & Olufsen speakers help make your music sound even better. If there’s anything really missing, it’s lack of support for Android Auto and Apple CarPlay.

Starting at $198,995 (U.S.), the DB11 V8 is not a cheap car. The fear was that the Daimler involvement would make future Astons lose their character and charm. After driving the DB11 V8, that’s not the case. Not only does it feel premium, but it feels special. At no point did I forget I was driving an Aston Martin, in a good way. 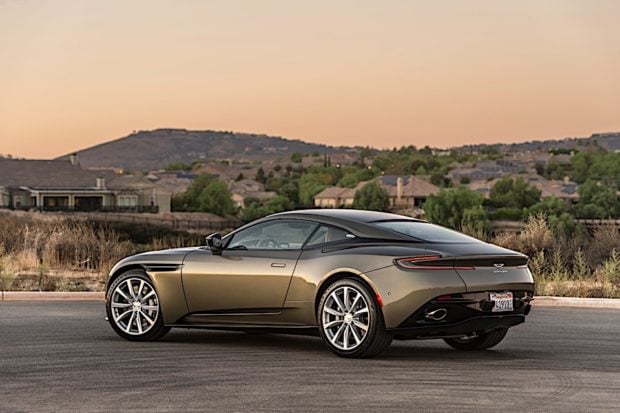 So is the DB11 V8 a watered-down martini of a car? No. Not all. If anything, the DB11 V8 is the car to go for if you like an engaging drive and sporty dynamics. It’s more than just a grand tourer, and if I had the money it’s what I’d buy.