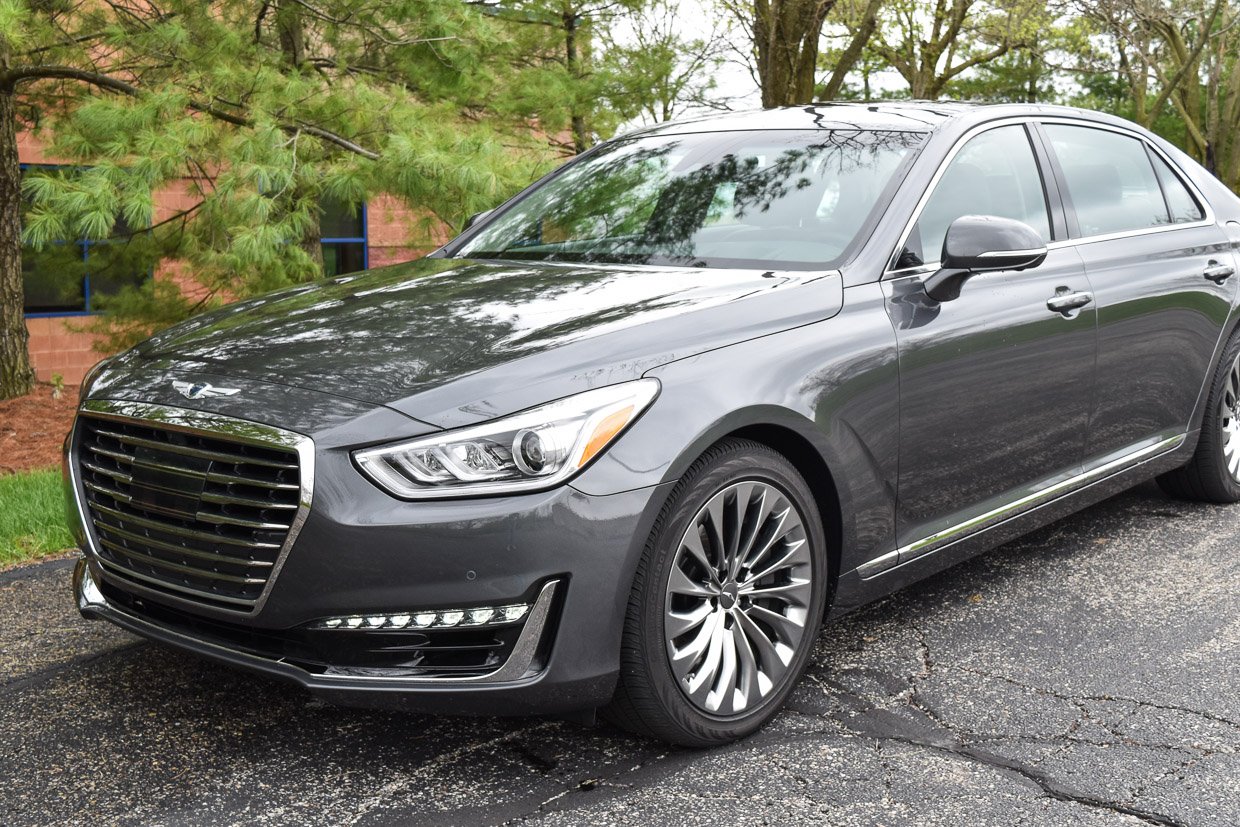 The band Haddaway had one of the most infamous one-hit wonder songs of all time called What is Love? Now that that ear worm is in your head (you’re welcome), it made me ask the question, with A Night at the Roxbury’s theme song as the backdrop, “What is luxury?” I ask because Hyundai has plunged head first into the luxury car market. It’s not a brand that most affiliate with luxury. But when Toyota launched Lexus and Honda launched Acura, did anyone expect luxury from those brands? Hyundai’s Genesis brand follows the suit of Lexus and Acura and actually challenges their car lines. They’re not backing down from the competition and, in fact, are raising the bar.

Getting away from the stigma that Hyundai and luxury don’t go together was a big challenge, so that’s why they launched the dedicated Genesis brand. There’s no mention of Hyundai within the marketing or promotion of their cars, so, from this point on, I won’t mention it either. The G90 was launched in 2017, so this model year there are only a few new features added to it, as it continues its evolution and development. Let’s look at the Genesis G90 for what it is and determine what makes it truly luxurious. 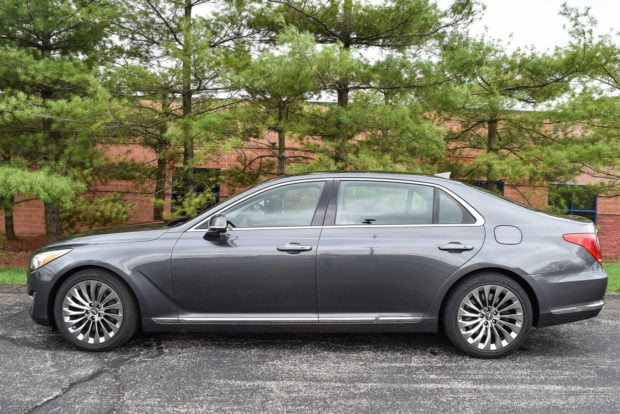 As the brand’s flagship, large sedan, the G90 has stout but sophisticated looks.The long hood dominates the G90’s profile. But there’s a wide C-pillar that gives the back a long look as well. The G90’s grille is impressive, but loses some of its appeal with the sensors that look like a plastic license plate holder in the front. This really detracts from the car’s look. These sensors are important, but more work needs to be done to better disguise them. Other OEMs have managed to integrate theirs better, so hopefully Genesis will improve this in future model years. Otherwise, the front end is timelessly designed. The winged Genesis logo stretches out centered over the grille, leading to the elongated hood. 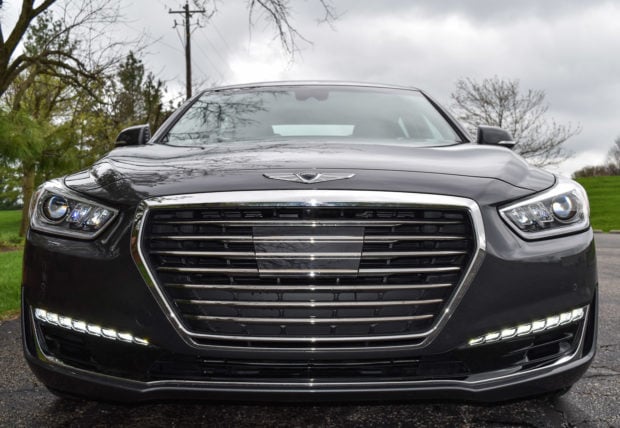 The back end of the G90 is its best side if you ask me. The tail lights are elegant and show the classy side of this car, while the twin chrome tail pipes reflect its power and performance. The G90 is intended to be an executive’s car and it is perfectly designed as such. So, the engineers and designers hit the mark with this sedan. 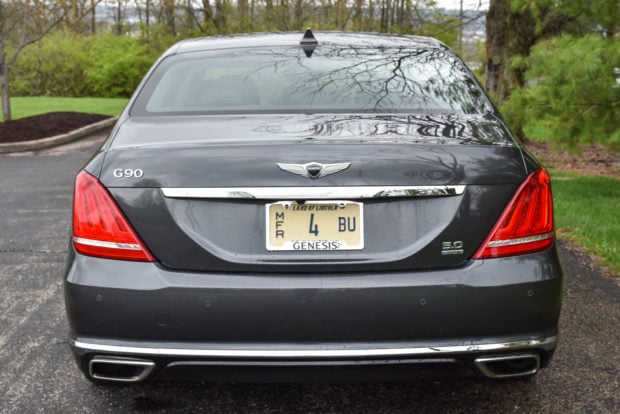 Some of the most impressive power and performance comes from these large luxury sedans. The Germans have been doing it for years and so has Lexus. So, it should come as no surprise that the G90 comes with both a V6 option and a V8 option. The 3.3-liter twin turbo V6 engine offers a more than adequate 365 horsepower, and is the more refined, and certainly the more fuel-efficient option. But, my tester was the powerful 5.0-liter V8 engine which makes 420 horsepower. Off the line, the G90 is fast, but not a speed demon. Rather, all that power and performance remains under control. It doesn’t growl or lunge, but has plentiful performance offered up with refinement. The G90 is well-mannered on the road, and while some enthusiasts may find fault with that, that’s exactly what I want from a large luxury sedan.

The eight-speed automatic transmission handles all the power well, offering smooth upshifts and flawless downshifting. My tester had all-wheel drive, making this sedan even more composed. The overall ride and handling of bumps is superbly comfortable, thanks to an adaptive suspension with electronic damping. However, if you want to feel the road when you drive, then this isn’t the car for you. This is a luxury sedan through and through in that regard, with smooth over-the-road performance, and a whisper quiet interior. 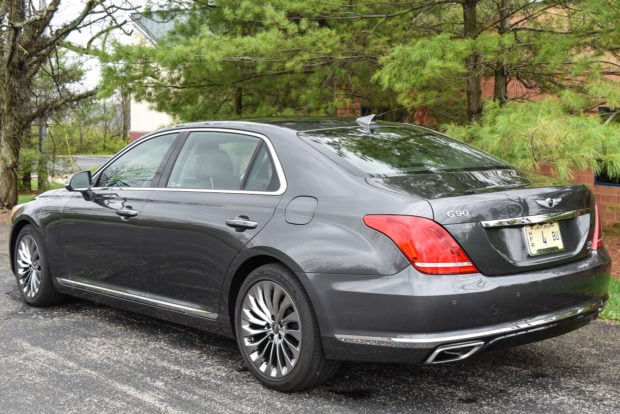 The big 5.0-liter engine combined with the added weight of AWD is the least fuel-efficient G90 configuration. As such, my tester had an EPA rating 15 mpg/city and 23 mpg/highway. In a week’s worth of mostly suburban driving, and one long road trip on the highway, I averaged almost 19 mpg. That’s not quite guzzler status, but it’s also going to cost you more trips to the fueling stations in this car. Still, the powerful V8 and the confidence-instilling AWD makes the fuel tradeoffs totally worth it.

Inside, the G90 obliterates any misconceptions that it’s just a glorified Hyundai. There’s nothing cheap about the inside of the G90. With genuine wood trim, Nappa leather seats with heat and cooling, and a fancy suede headliner, the G90 is draped in premium touches. I’d wager you could blindfold someone and cover the Genesis badging and ask them what car they were in, and they’d rattle off one of the luxury German auto brands or perhaps Lexus. 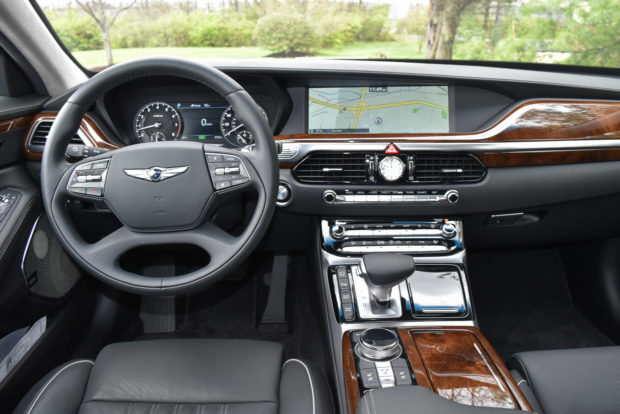 With all of its positives, one of the biggest downsides of the G90 is the limited cargo room. The 15.7 cubic-foot trunk is small for the segment. Compared to the Audi A7 or the Cadillac CT6, the G90’s trunk is small. The rear seats don’t fold either, which isn’t uncommon for the large luxury sedan segment. In a redesign, they might want to consider shrinking the front end by an inch or two, and add that length to the back to gain the needed trunk space.

A 12.3-inch touchscreen powers the car’s infotainment system. It offers a good mix of buttons and knobs to go along with the responsive touch commands. The system is easy to use but it was disappointing that it lacks Android Auto or Apple CarPlay, especially since these are available in Hyundai and Kia vehicles based on the same system. The Ultimate trim comes with a dual rear-seat entertainment system, which is a new feature for the 2018 model year. 10.3-inch touchscreens are mounted to the back of both front seats, giving rear passengers easy access to a variety of content. This is one of the best-looking rear-seat entertainment systems I’ve experienced. This helps add value to the sedan as a family vehicle too and this would be one heck of a family vacation vehicle with so much legroom and such a smooth ride. 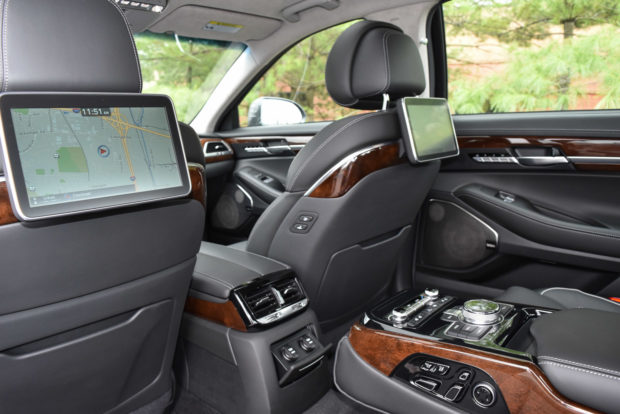 The top-of-the-line Ultimate trim also gets adjustable rear memory seats, both with heat and cooling as well. Some of the G90’s competitors like the Lincoln Continental (my current favorite car in this segment) have massaging seats, which takes the luxury over the top. The Genesis G90 does not go quite that far, but still offers plenty of comfort and amazing interior touchpoints.

So, what is luxury? I’m certain the definition varies for each person, but its core values can certainly can be found in the Genesis G90, and should win over any skeptics about whether Hyundai’s luxury brand belongs in this segment of powerhouses. (It does, just to be 100% clear.) 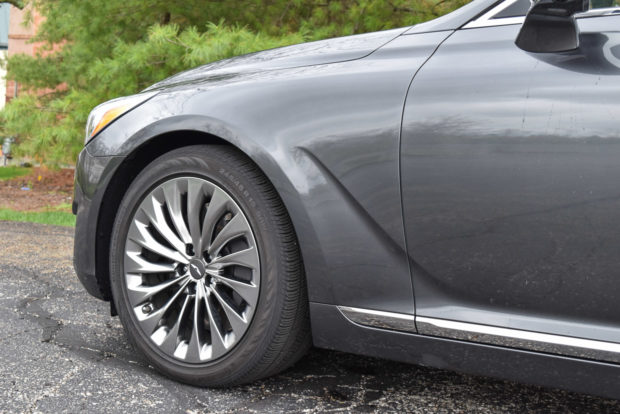 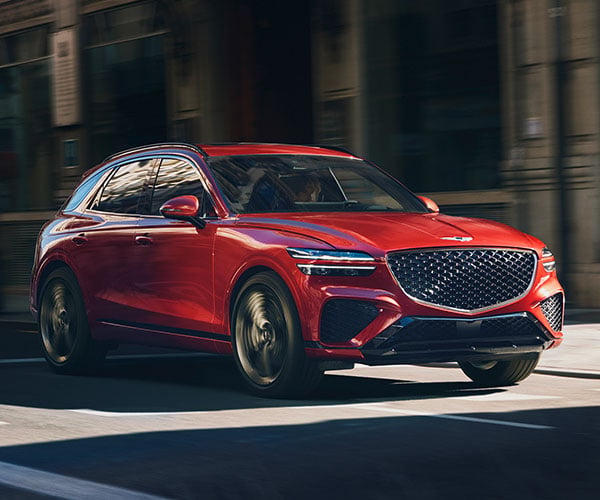