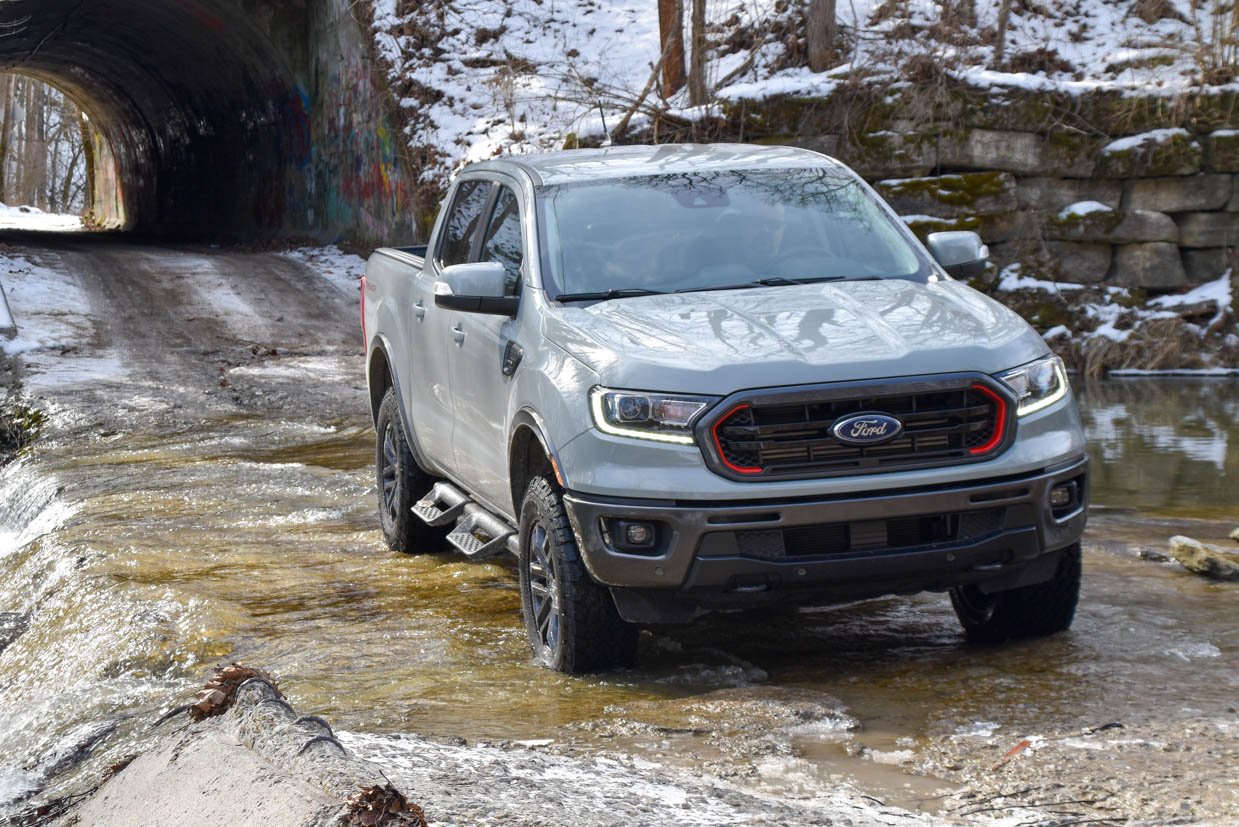 Perhaps there has not been a better name for a rugged, strong, off-road package ever than “Tremor.”  The brand is part of Ford’s new brainchild to create an off-road package to rival Toyota’s TRD. Ford is adding Tremor packages to the F-150 and already has it on the Super Duty line. And now, for 2021, they have added it to the Ford Ranger.

I will say right off the bat here that the Ranger is vastly improved by the addition of the Tremor. The looks improve, the performance improves and it generally feels like a modern truck by adding the Tremor package, which does cost an additional $4,290. Also, the Tremor Package is only available on the XLT and Lariat trims. 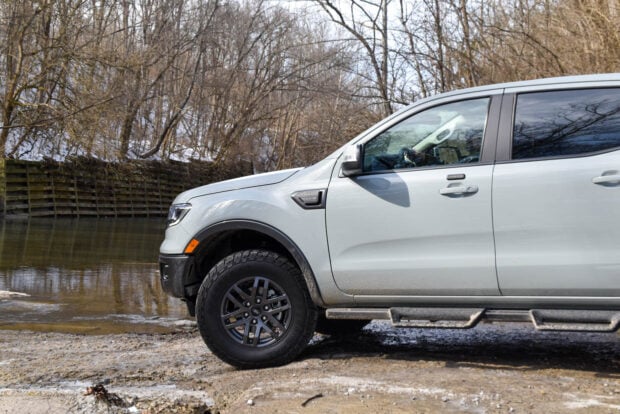 The overall look of the Ranger Tremor is stout. It has a great posture and a more aggressive appearance. It’s no Raptor, but it looks less bland than the standard Ranger. And my tester came in the eye-catching Cactus Gray color which has a satin gray finish that almost looks like matte. This same color debuts on the Ford Broncos this year as well. 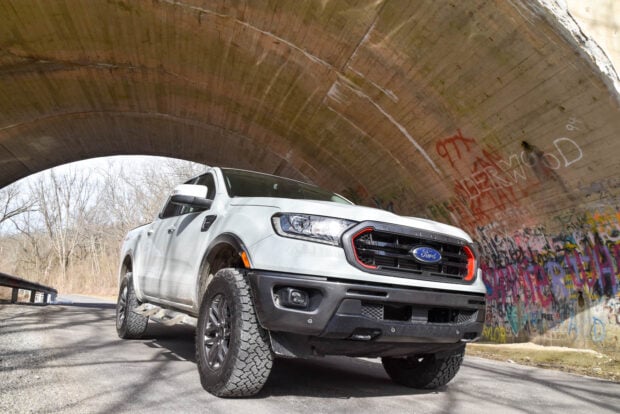 The grille is framed with a red outline that adds further distinction. Running boards function more like stirrups and are perfectly placed to help with getting in and out of the cab. They served well as places to wipe my shoes off, after taking the Ranger Raptor through a muddy and icy creek bed. 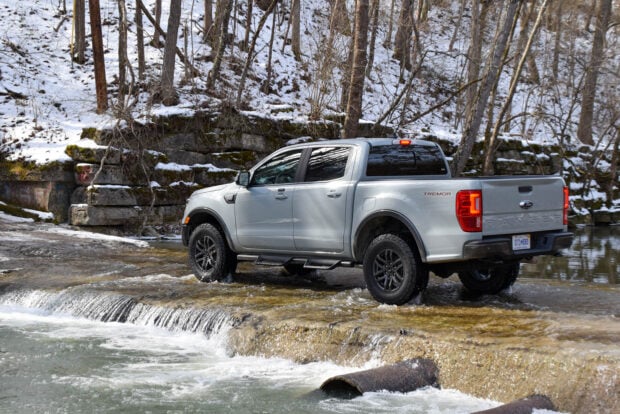 Some people balk at the idea of an off-road truck or any truck for that matter having a 4-cylinder engine. However, Ford has mastered turbo-boosting and as such, the Ranger’s 2.3-liter EcoBoost engine cranks out ample power and performance with a rating of 270 horsepower and 310 lb.-ft. of torque. The 10-speed automatic transmission is the best offering within this segment with no turbo lag at all. 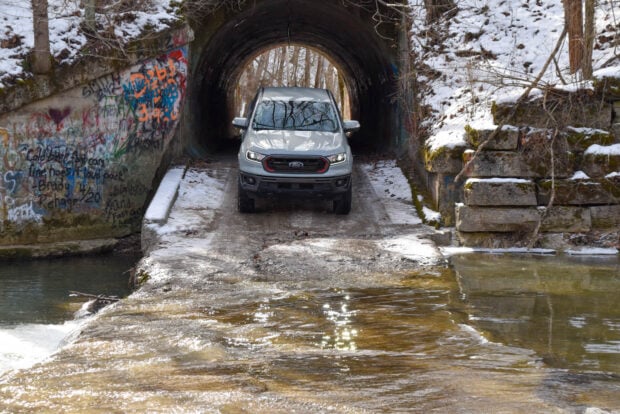 All of that aside, the truck performed well off the road, as well as on the road. Through a slippery creek bed, the lifted stance and upgraded suspension of the Ranger felt confident. Going up an ice-covered hill it crawled confidently in four-wheel drive. On the road, I really appreciated the Ranger’s performance too. While some road noise permeated the cabin (due to the bigger, knobbier wheels), I still felt it had enough refinement. 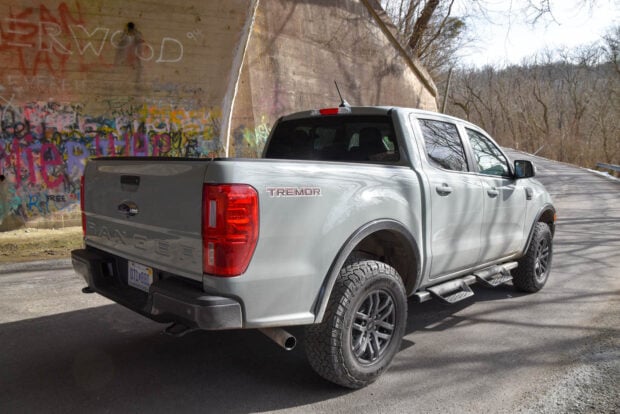 Inside, I appreciated the special Tremor badging on the seats, and the rubber floor mats showed they were ready to get dirty. So it’s a nice balance of refinement and ruggedness. The back seat had enough legroom for me to sit comfortably. More importantly, the headroom was good, which I can’t say the same about the Tacoma, which feels smaller and more restrictive than the Ranger. 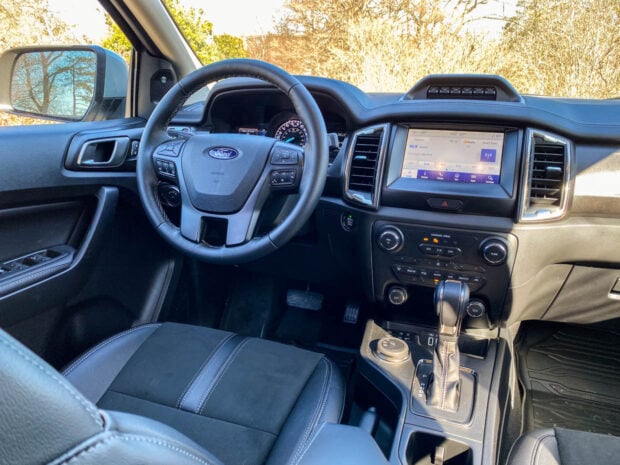 The best tech feature is the new Sync 4 system, which is just tremendous. It’s intuitive and offers wireless Apple CarPlay, among other upgrades. A nice, understated feature is the six auxiliary ports above the touchscreen. These can be used for aftermarket features such as light bars, ground effects, or other features. It may not interest me much, but one person who saw it thought it was brilliant for those big in the off-road community. 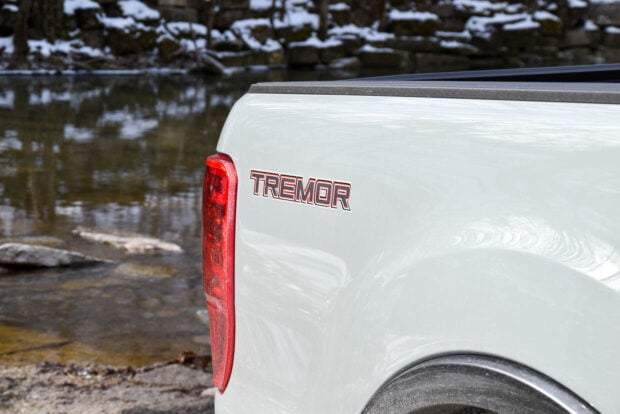 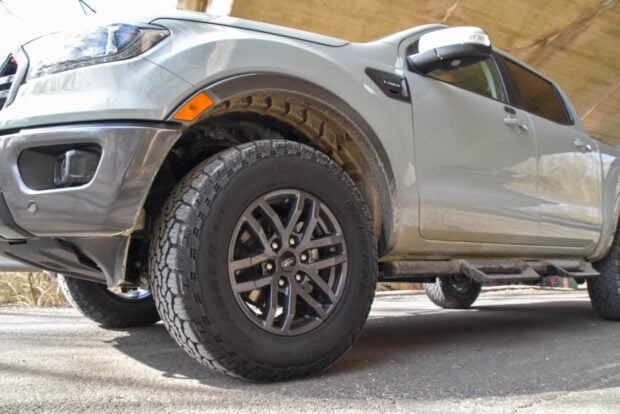 I’m obligated to always mention fuel economy. I do think many will opt for this version of the Ranger as a daily driver. That will cost them a little on fuel efficiency as the Ranger Tremor has an EPA rating of just 19 mpg/city and 19/mpg highway. When you’re off-roading or crawling through a creek bed you pay less attention to your fuel economy. And that’s where the Ranger with the Tremor Package really excels. It may not quite be a Raptor, but it’s a more affordable option that adds distinction and toughness to the Ranger.