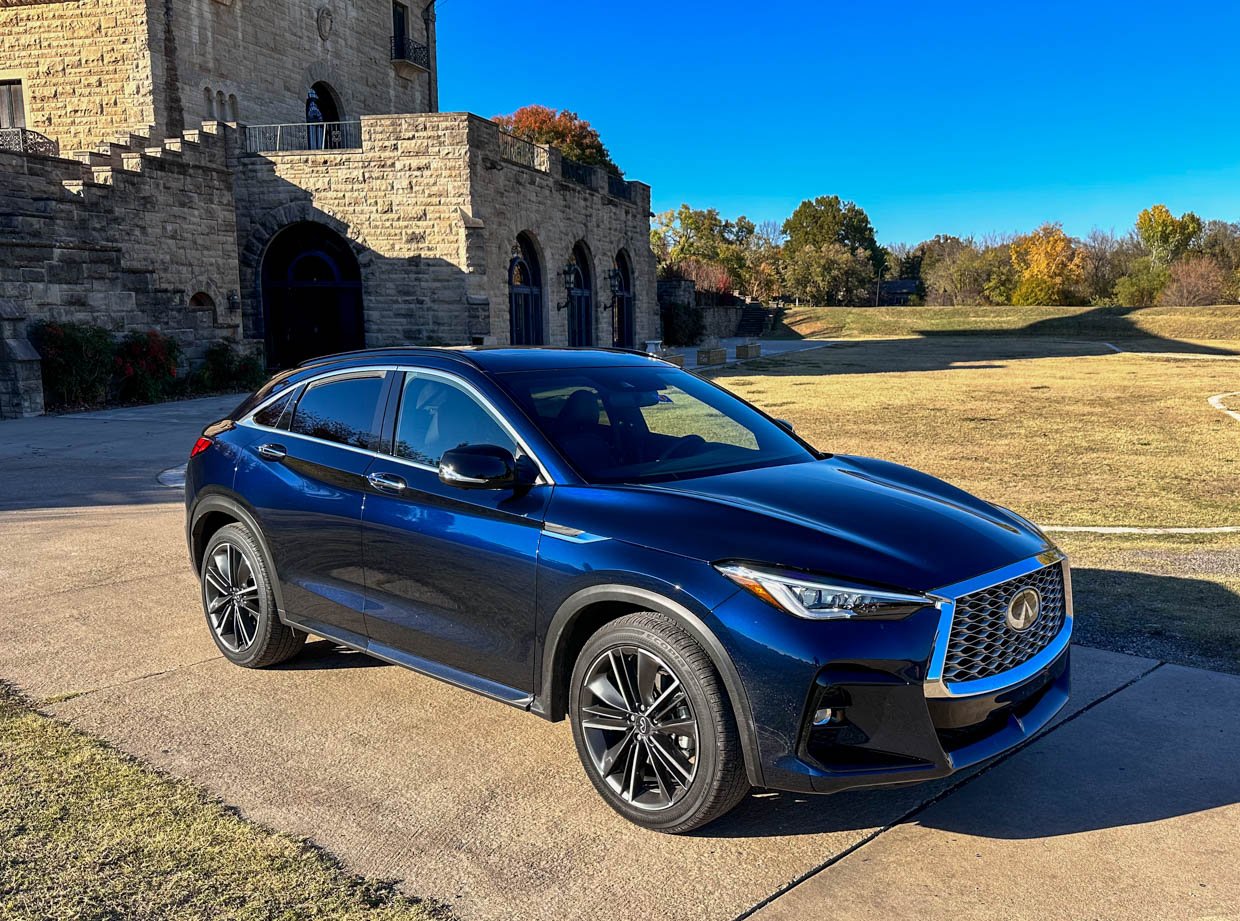 My wife and I owned three different Infiniti FX35s between 2003 and 2011, and we really did enjoy each one. But over the years, the FX – then renamed QX70 – couldn’t keep up with the competition from other luxury and performance brands. In 2017, Infiniti unceremoniously discontinued the QX70 to focus on new models. Then, in 2021, the Japanese automaker introduced a new crossover called the QX55 and boldly announced that it was the “spiritual successor” to the FX. Well, now that I’ve driven the 2023 QX55, I’m sad to report that the new car is a shell of its former self. Sure, it’s got sleek, cross-coupe styling like the QX70 before it, but that’s about where the similarities end. 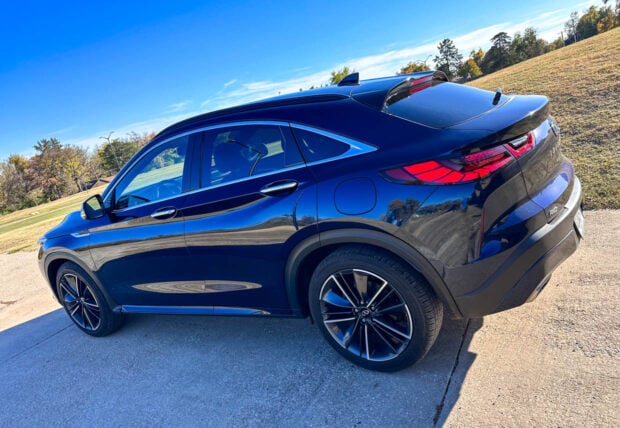 Never in recent memory have I experienced a vehicle that’s exterior design so belies its performance. The old FX was built on the same rear-wheel-drive platform as the Nissan 350Z and fully embraced its sports car underpinnings with a powerful 3.5-liter V6 engine and even a model with a 5.0-liter V8 in the early days known as the FX50. It even had a great exhaust note at first. The QX55 has way more in common with the Nissan Altima than it does with Z. Like so many other crossovers these days, it has a 2.0-liter turbo four engine. Sure, Infiniti tuned the variable-compression engine to make a respectable 268 horsepower and 280 lb-ft. of torque, but it doesn’t feel good, mainly due to the terrible continuously-variable transmission (CVT) they connected it to. It’s not very quick either; its 6.9-second 0-to-60 time is a half-second slower than a Kia Soul GT-Line Turbo. 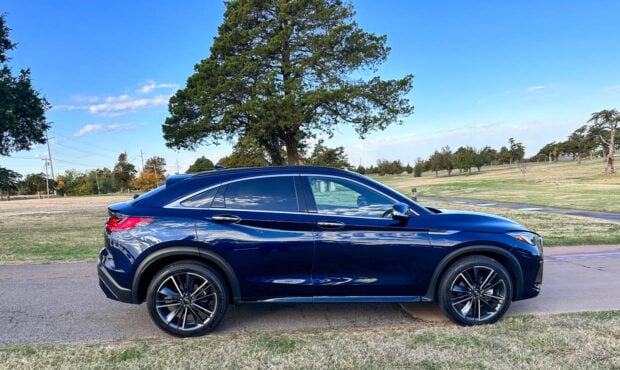 The CVT absolutely ruins anything good about the way the QX55 accelerates. It makes strange rubberband sounds as it “shifts” through artificial gear changes, sounding more like a Black and Decker Dustbuster than a luxury crossover as you approach the redline. And don’t get me started on the paddle shifters – they make zero sense on a CVT. While the QX55 comes standard with all-wheel drive, it’s heavily front-biased, so sporty it is not. On the plus side, fuel economy is pretty good, offering 22 mpg in the city, 29 mpg highway, and 25 mpg combined. 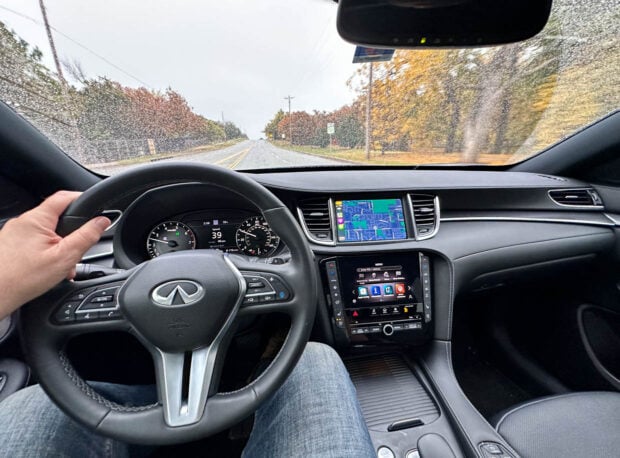 The one area where the QX55 feels somewhat crisp is its suspension, which is reasonably stiff and provides good feedback from the road. The steer-by-wire system is better than it was in its early implementations in the Q50 and Q60 sedans, but it still has a vague and somewhat disconnected feeling. While Sport mode adds a bit of engagement, it feels more like a motor pulling against your inputs than anything that improves driving dynamics. I was also surprised at how noisy the interior could get at highway speeds – not something you expect from a modern luxury vehicle. 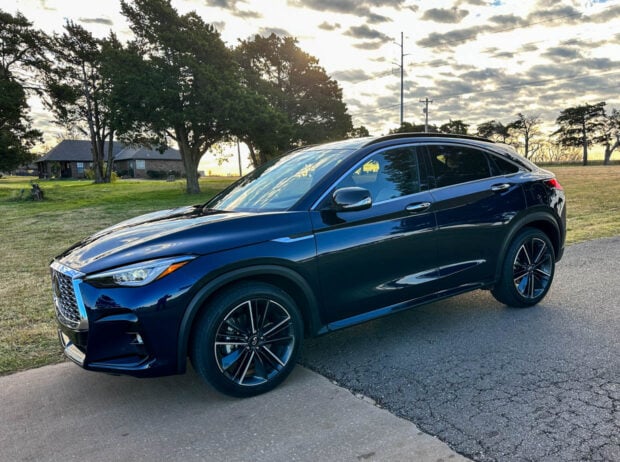 Inside, the QX55 doesn’t live up to the promise of its exterior styling. It’s simply bland – as if a committee of product executives told the interior designers to come up with the most inoffensive and middle-of-the-road design they could. It’s functional, but there’s nothing memorable or noteworthy about it. You can mark off leather seats and leather-wrapped steering wheel from your checklist, but that’s about it. 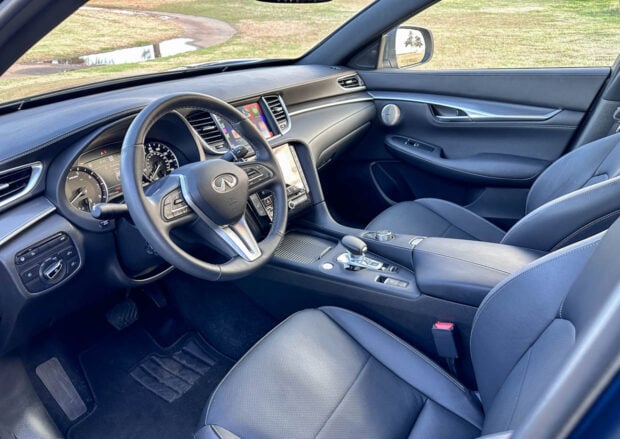 And then there’s the dual display in the center console, which feels like another half-baked implementation. The top display provides access to navigation, cameras, vehicle information, and Apple CarPlay, while the bottom screen focuses on typical infotainment and climate controls. There’s a scroll wheel controller too, but it only controls the top screen. The two screens feel like wholly isolated systems designed by two different user interface teams. The 16-speaker Bose sound system offers punchy audio, albeit with a slightly harsh high-end. The FX35 that we owned was one of the first vehicles ever to provide a surround-view monitor, and the QX55 updates that idea with moving object detection and guidelines that help you park in tight spaces. However, the cameras and display produce grainier images than you’d expect from a modern high-definition display. 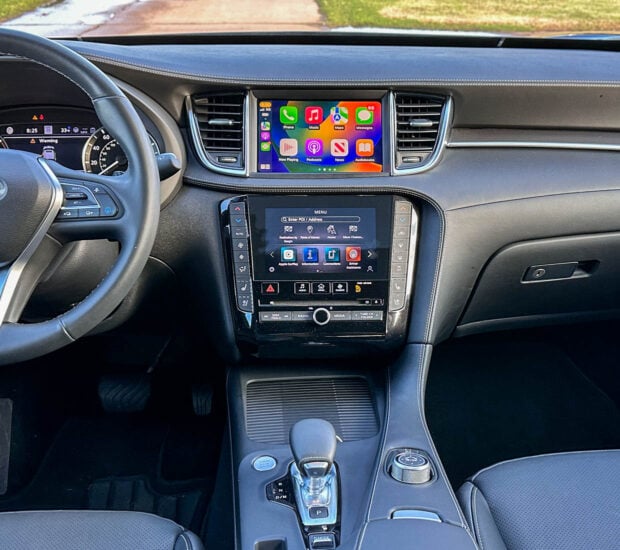 I was pleased with the comfort and generous legroom in the rear seats, something that can’t be said for every crossover on the market. I thought the aggressive roof slope might negatively impact headroom, but it didn’t bother me when I sat in the back. While the mid-line Essential model I drove came with climate-controlled front seats, heated rear seats don’t appear until the top-of-the-line Sensory trim, which also gets upgraded semi-aniline leather seats. 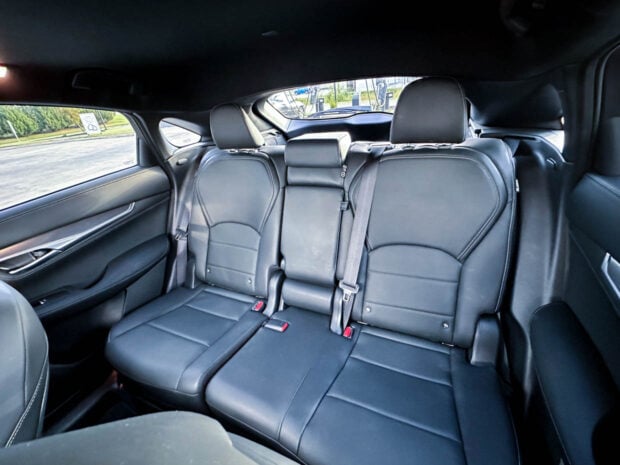 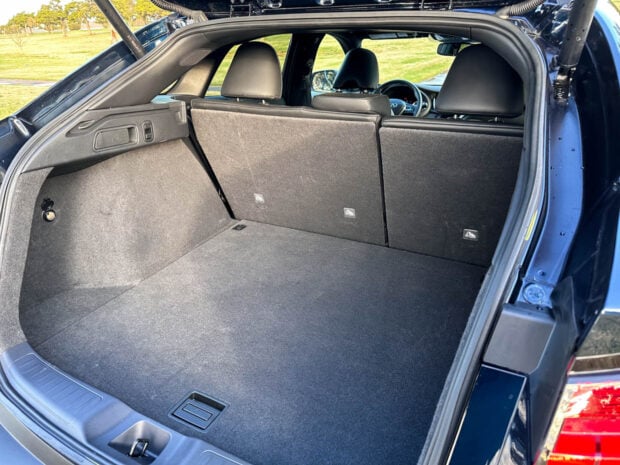 While the QX55 is a very appealing crossover from the outside, its uninspiring engine and CVT and lackluster interior design really hurt it. For someone with a long history driving the vehicle that supposedly served as its muse, it’s a big disappointment. For those still interested, the 2023 QX55 Luxe starts at $49,150, while the QX55 Essential reviewed here starts at $54,250. The QX55 Sensory begins at $57,800. 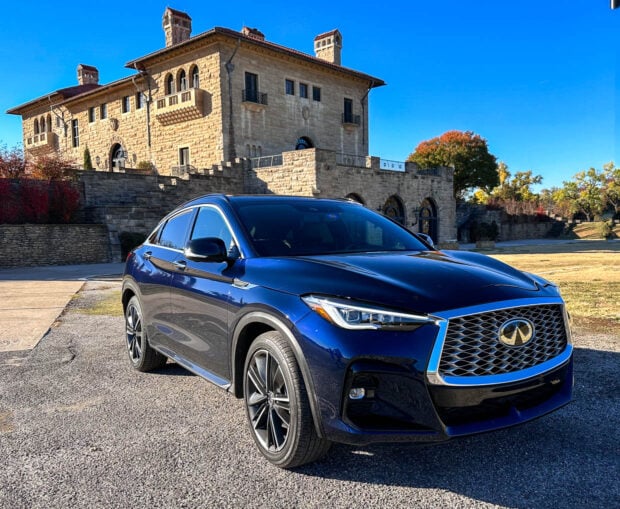