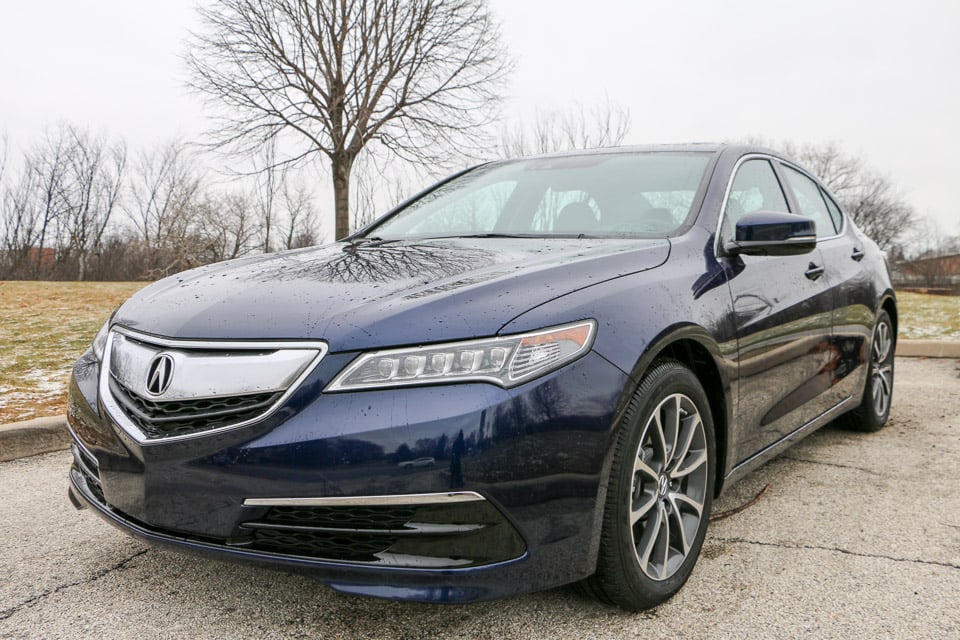 Acura is one carmaker that got out of the gates quickly, picked up speed and then completely lost its way on the course. Great cars like the Legend and the Integra back in the 1980s set the tone for the Japanese luxury brand, and then all hell broke loose. They killed off the good names and traded down for European-like nomenclature in the mid ‘90s. The Legend then became the RL, and the Integra became the RSX. Then they created the TL sedan in 1995, the CL coupe in 1997, the TSX in 2004, killed the CL in 2003, and ended the RSX in 2006. Confused yet? Well, it’s not over. The ILX small sedan was created in the spirit of the RSX in 2013, and then the RL flagship became the RLX in 2014. That’s a lot to keep up with. At least their MDX and RDX SUV names haven’t been messed with – yet). As if that wasn’t enough, for 2015 Acura is completely removing the TL and TLX from its lineup, replacing it with the all new TLX sedan. You may need some Rx just to help with the headache of keeping track of all of the name changes. 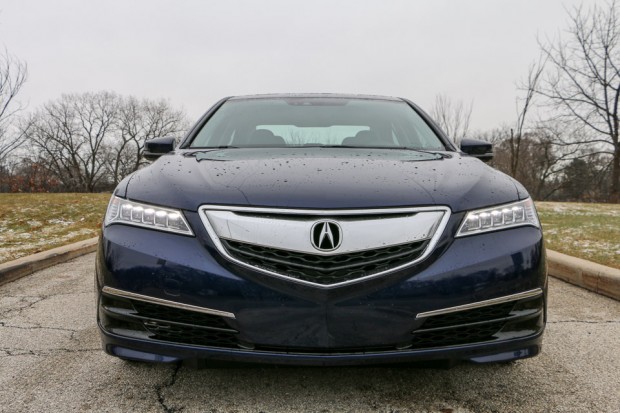 Despite the confusion surrounding the creation of the TLX, the move does make some sense for Acura (and hopefully soon for the consumer) because the overlap between the TSX and TL seemed unintuitive. Each car looked shockingly like the other, to the point where even car buffs couldn’t tell them apart from a distance, a bit like the Audi A4 and A6. Both cars did a poor job with the Acura design language’s power plenum grille and overdone angularity. Rather than softening up the two similar cars, it was time to take a new path. The TLX not only looks better than both cars, it does so in a way that cleanly departs from the old design language without looking totally unrecognizable, not an easy feat. It looks like a smaller, sleeker RLX, really, but the design works better on the TLX because of the price point. The RLX still needs something more to distinguish it as a flagship. 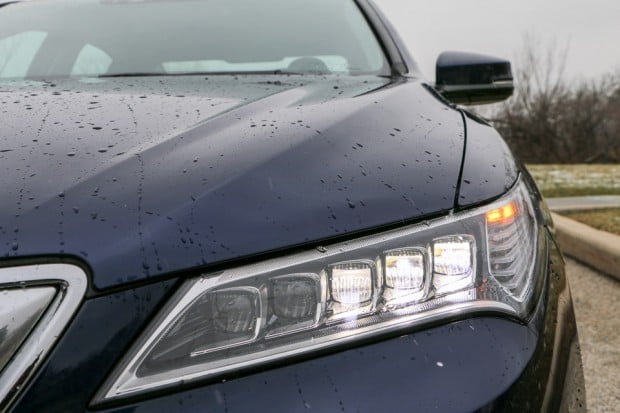 The fascia of the TLX dials up the aggressiveness, as well as the refinement. Rather than looking like muted beak, the TLX adds flair with standard LED jewel-eye headlights, a more dramatic grille and silver trim everywhere with well-placed bits on the lower fascia that didn’t exist on the TL. Gone is the weird curved line on the front fender, replaced by a second character line that extends all the way to the trailing edge. The A and C pillars are thinned out, making the car look less top-heavy. The awful slab of a trunk from the TL is gone, replaced by taillights that extend onto the back of the trunk, giving the TLX a leaner look. 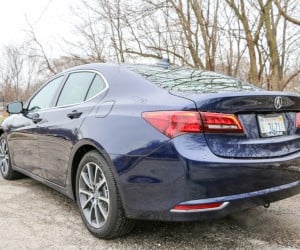 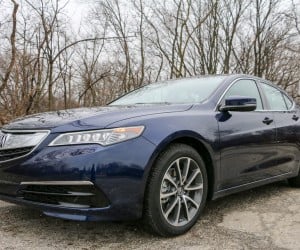 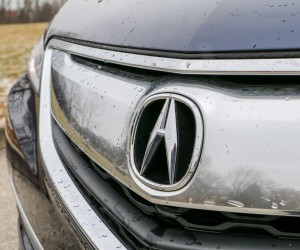 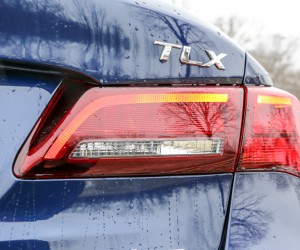 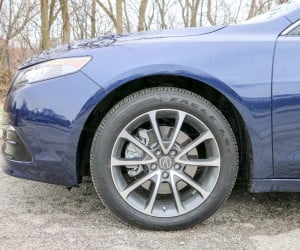 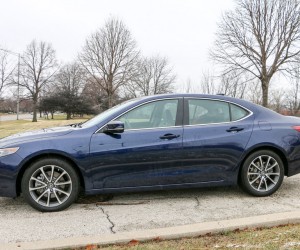 The cabin of the TLX is definitely a step up from the TL. Though the TL was still a solid cabin with good ergonomics, the TLX just looks more refined. Seating is incredibly comfortable (and heated, standard) and the clean instrument binnacle is easy to read and handsome. The center stack is a bit stymied by the use of disparate looking dual screens, the top one is just a display, while the bottom is a touchscreen. Graphics are inconsistent, making the juxtaposition odd. The fact that there’s some function overlap (audio, HVAC) is even more strange. But you get used to the tactile buttons and knob for the top screen, and the nav system is easy to use. The TLX also comes standard with front and rear LEDs, paddle shifters, moonroof, and dual-zone automatic climate control. 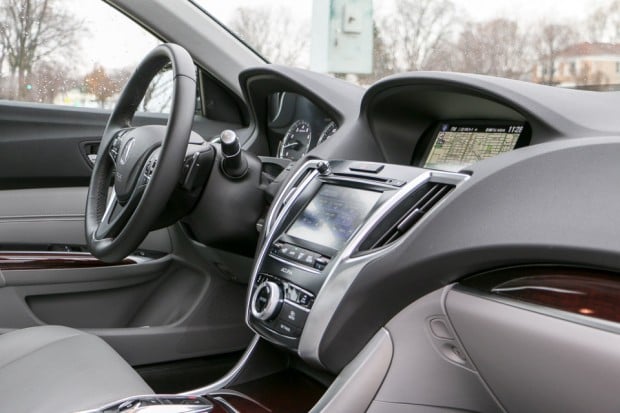 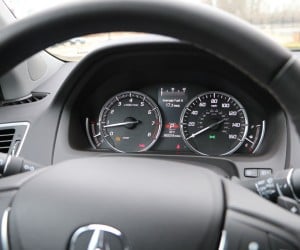 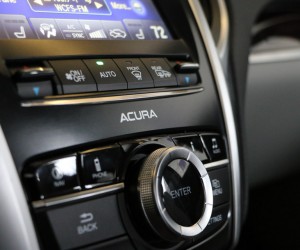 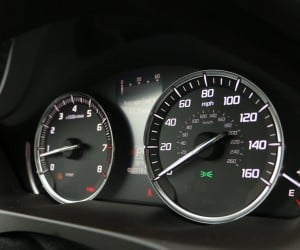 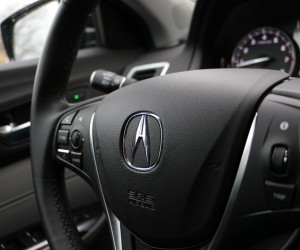 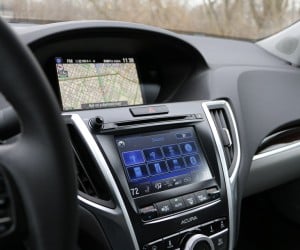 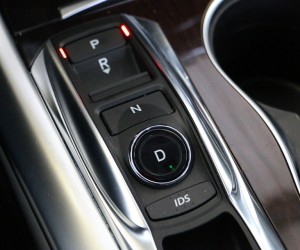 Our test car had the 3.5-liter V6 engine, but there’s more than just the 290 horses and the 267 lb-ft of torque on hand. Our TLX 3.5 came with the optional Super Handling All-Wheel Drive system, engine start-stop, and Variable Cylinder Management that kills three of the six cylinders for fuel savings when the engine doesn’t have to work hard. It’s all mated to a ZF 9-speed automatic transmission. The SH-AWD outfitted V6 gets a unique push-button gear shift setup between the seats. It’s all very high tech but takes some getting used to if you’re used to the ubiquitous gearshift knob or column shifter. 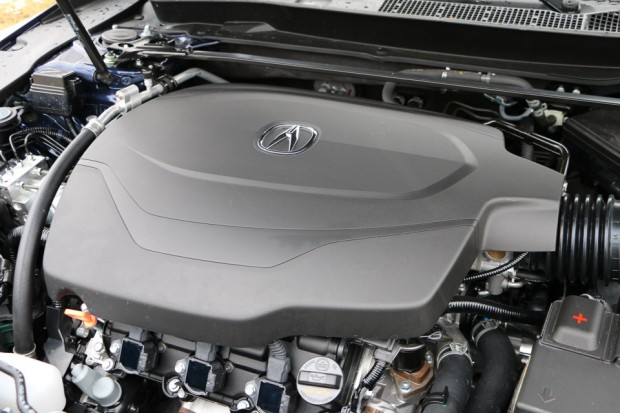 The TLX drives so well, it reminds us of what the folks at Honda used to deliver in terms of driving pleasure. They’ve now taken a nose-heavy car and utilized cutting edge technology to make it a very rewarding drive. What helps in the driving dynamics department is the weighty electric steering and the SH-AWD system that keeps car in check during hard driving and the spectacular torque vectoring system that helps reduce the car’s tendency to understeer by managing the back end so well. Though we didn’t track the TLX, we put it through spirited paces on backroads and found it to be a capable handler, especially when Sport+ is queued and gears are held for longer (redline) and rev-matching smooths out the downshifts just about perfectly. 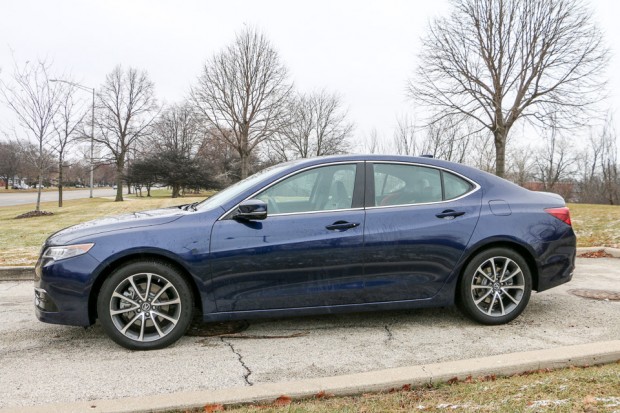 The TLX is a bright spot on an otherwise spotted recent history of Acura’s schizoid changes. Though one car may not totally alter Acura’s future, it points to the right direction where design, driving pleasure, amenities and pricing come together well. It’s a car worth looking at over the Germans, in spite of the lack of a RWD setup. The V6 SH-AWD TLX not only looks more expensive than its asking price of $32,365(USD), it provides the owner with a rewarding driving experience and ample amenities, while providing the kind of reliability and practicality we expect from Acura with a strong dash of attractive design.