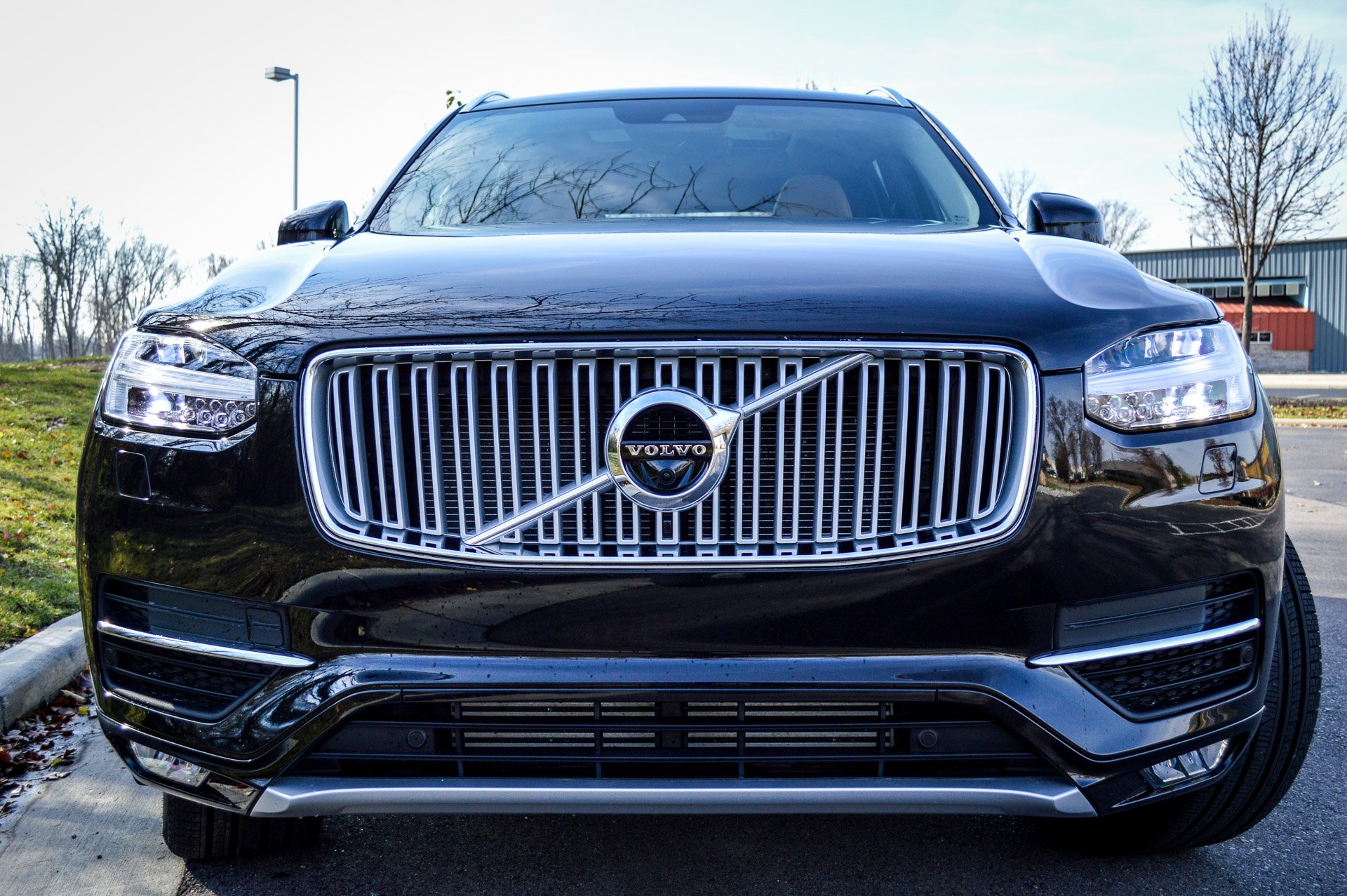 And the winner is… It’s award season both in Hollywood and in the car industry. The 2016 Volvo XC90 three finalists for the prestigious North American Truck of the Year (NATOY) at the 2016 North American International Auto Show (NAIAS), and was the much-deserved winner.

The Volvo XC90 is one of the most flawless vehicles I’ve driven in a good while. It’s not perfect, but it’s darn close to it. Completely redesigned for 2016, the XC90 brings all new looks, new technology, and an improved drivetrain to combine into an elite SUV. 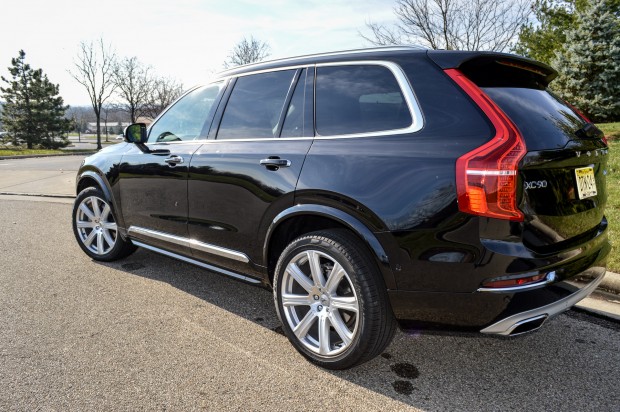 On looks alone, the XC90 warrants recognition. It’s absolutely stunning with a perfect blend of refinement, style and luxury. So many other luxury SUVs are gluttonous in their styling and thrive to be so obviously luxurious, that they often become garish. The subtle design features of the XC90 give it all the luxury it needs. The right-sized grille is flanked by headlights featuring Volvo’s “hammer of Thor” design, and it’s incredibly eye catching, and distinctive at night. That same attention to details and immaculate styling is present on the rear lights too which have a distinctive vertical shape. Rarely do vehicles look so stunning in at night, but the XC90 absolutely does. 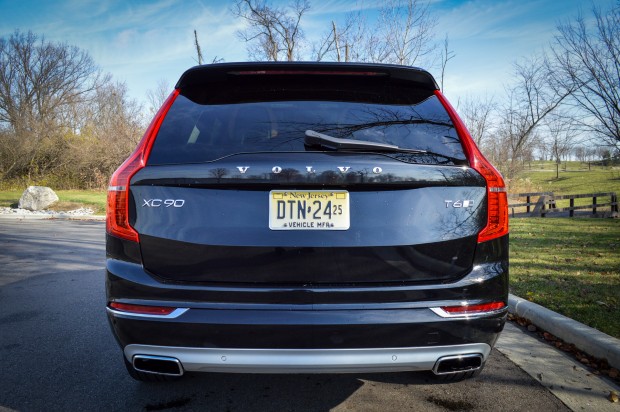 The seven-passenger XC90’s interior rivals any other luxury brand on the market. High-quality materials are used throughout. The dashboard is ultra-plush with bold leather color accents. Trimmed out with complimentary wood accents, the interior has a distinctly European vibe. 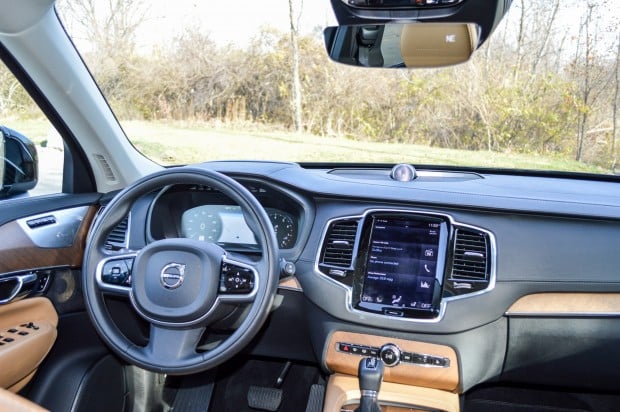 My tester had illuminated tread plates, Nappa leather upholstery, heated and ventilated front seats and walnut wood inlays. The interior is so pristine and elegant, especially on the Inscription trim features. 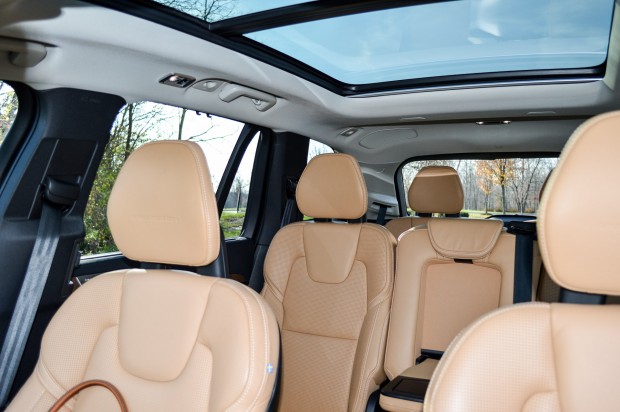 The seats are comfortable, and well-suited for long road trips. Rear passengers will enjoy vast amounts of legroom and headroom. The three-passenger second row bench can slide up and back, and the middle seat has a fold-down section that functions as a booster seat. Three adults would have restricted shoulder room, but two adults and one child would be perfectly comfortable. The third-row seat is best suited for smaller passengers, but is easily accessible with the push of one button. 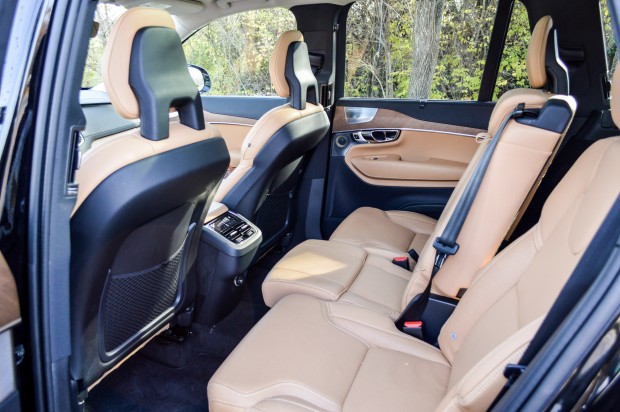 A true panoramic sunroof runs the length of the vehicle and streams plenty of natural light into the vehicle. Generally, I find sunroofs to be pointless, but in the case of the XC90, it’s part of the lavish charm of its immaculate interior. 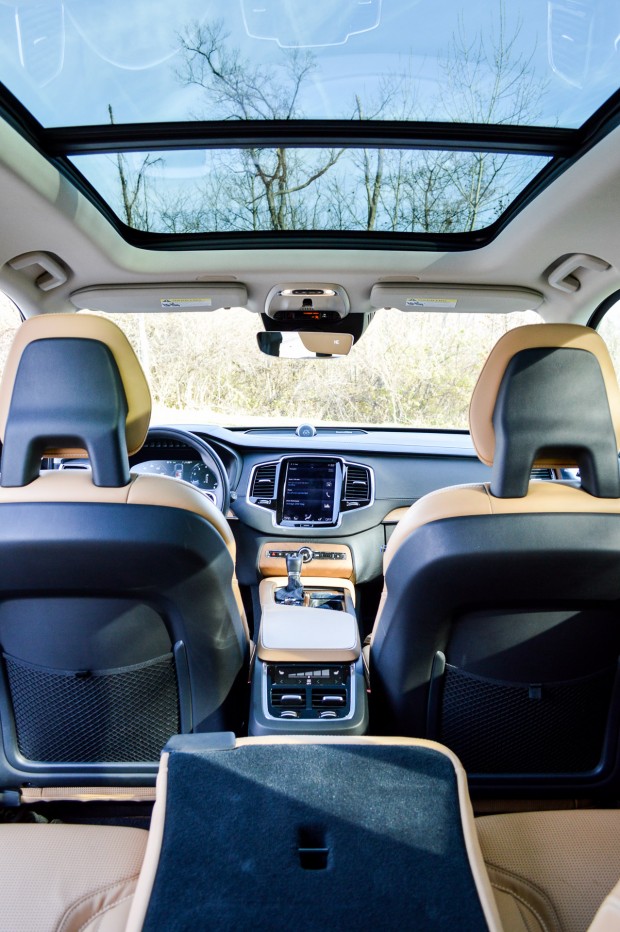 The entire cargo room for the XC90 is near the top of the segment. With all seats upright, there’s 15.8 cubic feet of space behind the third row. Access to this is simple with a hands-free power tailgate (simply have the key fob on you and wave your foot under the bumper). Fold all seats flat, in just a few simple steps, and there’s 85.7 cubic feet of space. This makes the XC90 a potential workhorse for home projects. 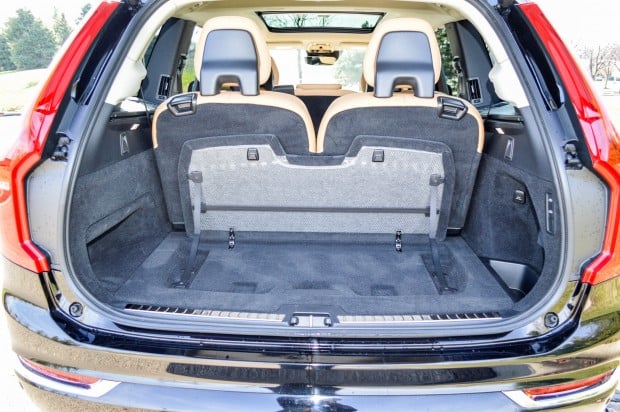 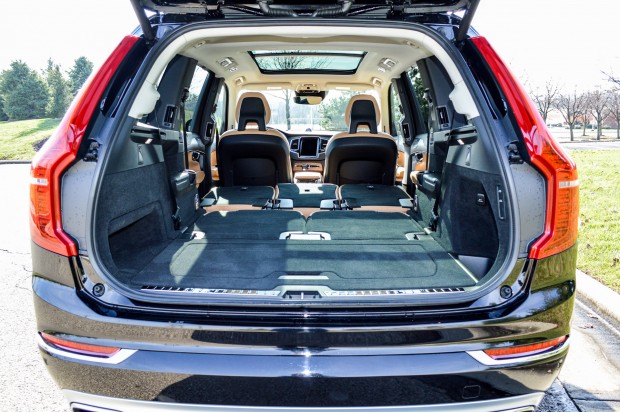 This Swedish-made SUV is chock full of technology. The 9-inch touchscreen is organized within the dashboard at an angle convenient for the driver. Unlike most in-car displays, It’s vertically oriented, rather than horizontal. This does dominate the cluster and puts the infotainment front and center. The on-screen menus are clean and well-organized. That said, Volvo’s infotainment system is not perfect. It’s less than intuitive for some functions (like accessing the heated seat controls), but is infinitely better than some of the over-engineered German rivals.

The standard parking assist feature is great. As part of the Vision Package (an extra $1,600), there’s a 180-degree, surround-view parking feature. It renders a bird’s-eye image of what is all around the vehicle, including objects in front of, behind and on the side of the vehicle, and is the best parking system I’ve experienced. And the images are crystal clear and render quickly. 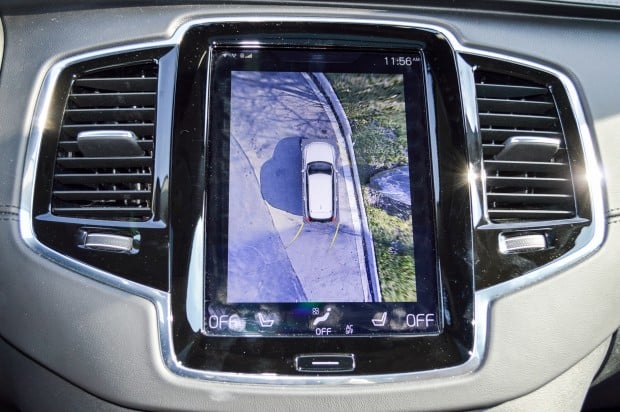 The new and improved powertrain gets maximum performance out of a four-cylinder engine. The direct fuel-injected 2.0-liter turbocharged engine creates an impressive 316 horsepower, and 295 lb-ft. of torque. The XC90 is swift and spry, especially for a vehicle that weighs more than 4,300 pounds. There is a little bit of turbo lag, and fuel-saving start/stop technology that holds it back a little from being a jackrabbit off the line. However, unlike some other start/stop technologies, this one engages quickly and with little effort. That said, it does take a little extra time to disengage too.

The XC90 has a fuel economy rating of 20 mpg/city and 25 mpg/highway. Even with the aggressive start/stop technology my XC90 averaged much closer to the 20 than the 25. I averaged 20.8 mpg in a week’s worth of driving, most of which was spent on the highway.

The eight-speed automatic transmission is spectacular, and a drive mode selector makes the all-wheel drive XC90 even more enjoyable. Volvo’s traction-control system provides confidence in inclement weather, and its double-wishbone suspension that makes for a firm ride, that’s not bouncy, but not as soft as other luxury SUVs. 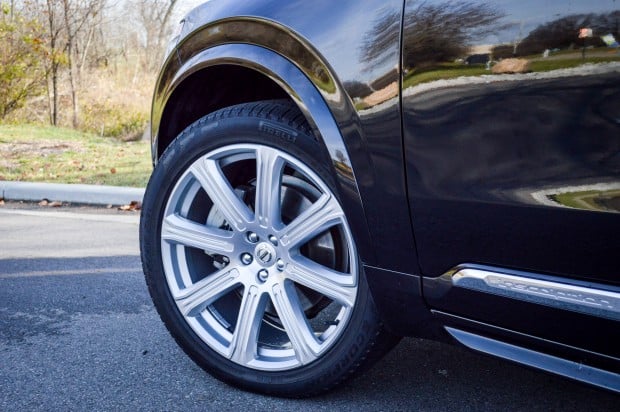 Volvo hints at the autonomous driving vehicles of the future, with some self-driving technology in the XC90. Sensor-based technology like collision avoidance, lane departure and adaptive cruise control preview the future of the auto industry. I’ve experienced other vehicles that had similar technology, but Volvo takes it further offering near-autonomous driving at speeds below 25 mph. There are sensors all around to help assist the driver, and also to provide safety.

However, this technology can also get in the way. I attempted to take it through a car wash, with all that technology turned on. The XC90 refused to proceed when put in neutral to slide through the car wash. I had to back out of the wash and scour the manual to figure out a kill switch to disengage all the sensors. Once those were disengaged, the XC90 was ready for a thorough cleaning. However, between this incident, and the overly sensitive lane departure system, the self-driving technology got a little ahead of itself.

The sensors detected tar lines and road imperfections as lane lines, and felt the vehicle was swaying out of the lane and tried to correct itself. I eventually disabled this feature for the rest of my test drive. 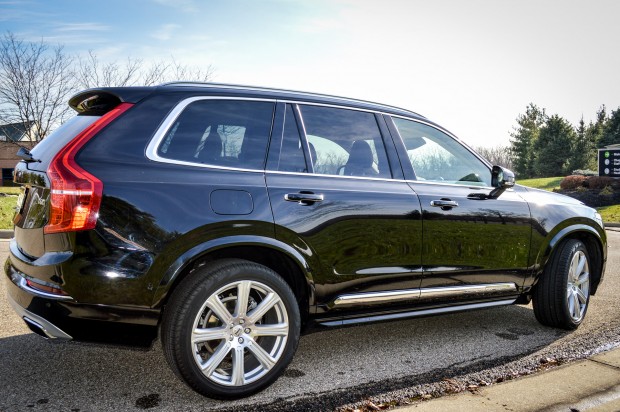 There are three trims for the XC90 and there is also a hybrid version. The regular XC90 is offered in the base Momentum trim, along with the sporty R-Design and the top-of-the-line Inscription trim. My tester was the Inscription with a base price of $48,900(USD). With several option packages and niceties, my tester had a final MSRP of $66,705. The base trim XC90 has a starting MSRP of $44,945. When compared to other luxury SUVs, the XC90 is competitively priced. It has all the technology and all the luxury you would expect from a premium vehicle. Its styling challenges other European SUVs as well as the Japanese luxury brands.

Is the XC90 the perfect vehicle? No. That likely doesn’t exist. But comparted to other luxury SUVs, this Swedish beauty shows why it’s turning heads and winning awards. With all due respect to the other nominees for NATOY, the XC90 won that award running away with it’s style, technology, drivability and overall value.

2019 Toyota RAV4 First Drive Review: RAV for All and All for RAV 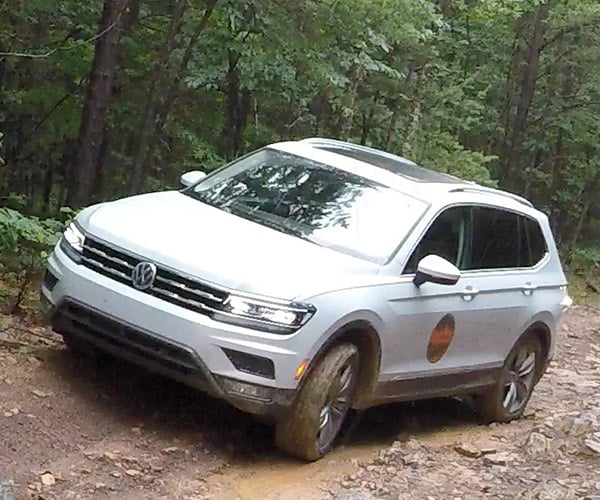