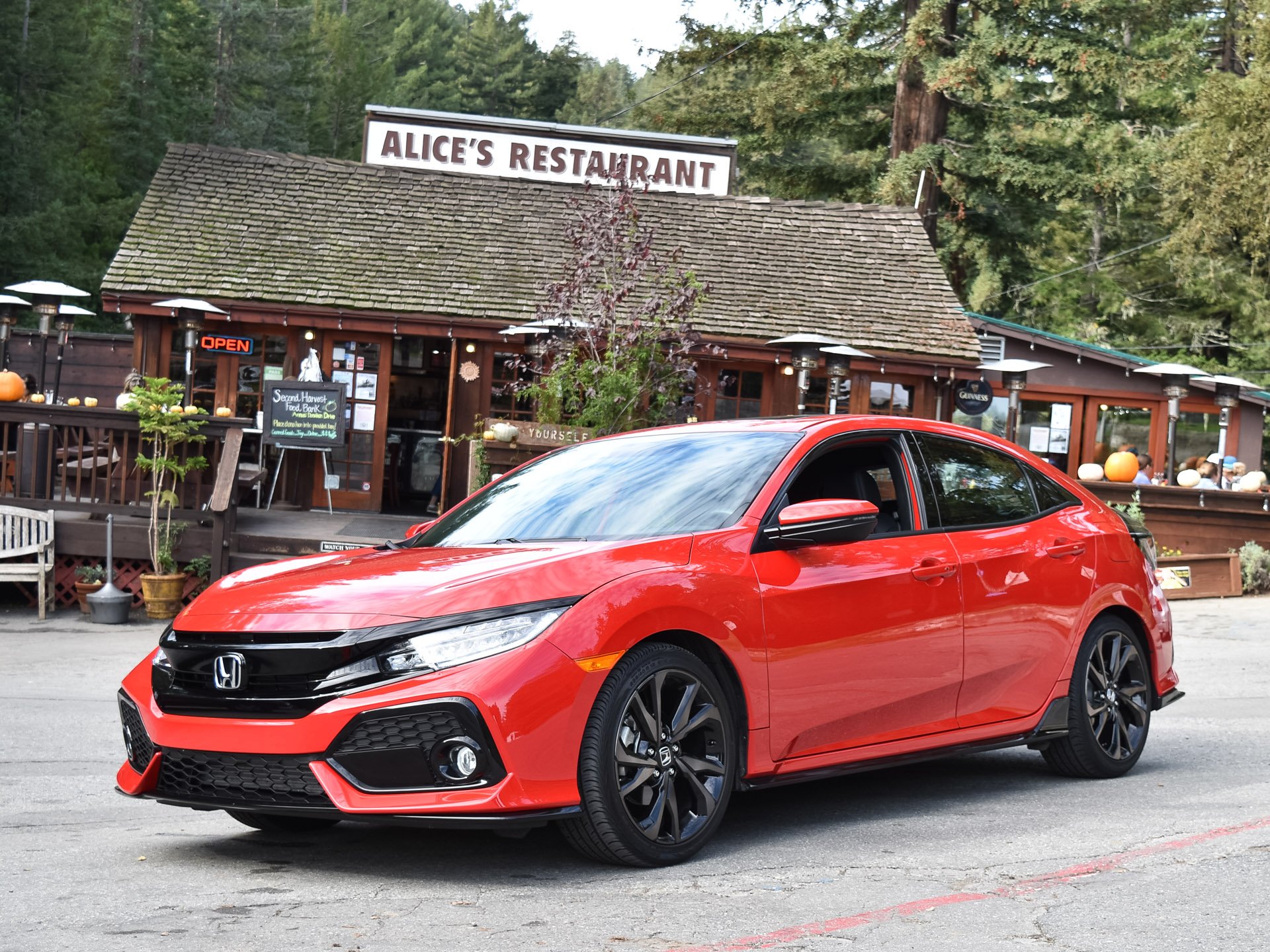 The late great Arlo Guthrie’s classic song Alice’s Restaurant had the chorus of “You can get anything you want.” And perhaps the same applies to the new Honda Civic. Honda has made the Civic available as a sedan, a coupe, and now a hatchback. Two more iterations are coming with the SI and the Type R trims. It’s also apropos that Honda hosted its first drive event for the new Civic Hatchback near the actual Alice’s Restaurant, which inspired the song. Honda really does believe you can get the Civic any way you want. 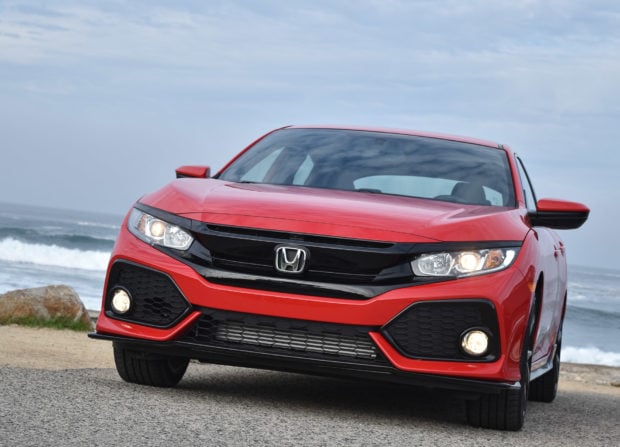 After a redesign for the 2016 model year, Honda has launched a hatchback version of the Civic, which is the first one since 2006. The Civic hatchback has a new sporty-looking front grille. The rear is slightly elevated giving it a more aggressive posture than the Civic sedan or coupe. In fact, the hatchback has a totally different look that will likely appeal to a younger buyer who values sportiness, performance and fuel economy. The Civic hatch delivers on all three.

All along the California coastline, as we drove both the CVT and manual version of the Sport and Sport Touring hatchback, we were asked questions by onlookers. “What kind of Civic is that?,” people would ask. On the crowded streets of San Francisco, a trolley car rider gave me the thumbs up and asked about it. The Civic sedan and coupe are more conservative in their overall styling and appeal, not so for the hatchback. It truly is a stunning-looking car. 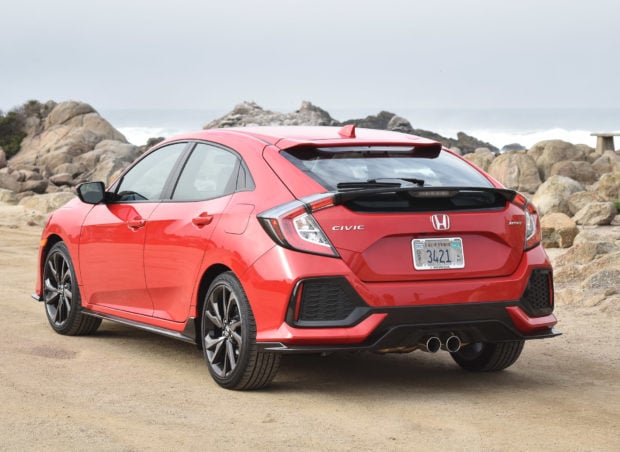 The Civic hatchback has 1.5-liter four-cylinder turbo engine. Even though the output numbers aren’t mind-blowing, the performance is much better than the tamer, and less powerful sedan and coupe. The EX and LX have 174 horsepower, while the Sport and Sport Touring have 180 horsepower. A manual transmission is available on the LX and Sport trims, and a continuously variable transmission is available on all trims. The manual transmission adds to the excitement and overall sporty side of the hatch. The CVT is better than other CVTs found in some of the Civic’s competition. During a heavy-footed trek down a redwood forest mountainside, the CVT performed well. There was very little turbo lag. The provided paddle shifters on the Sport trim helped with engine braking and to override some of the quirks of all CVTs. 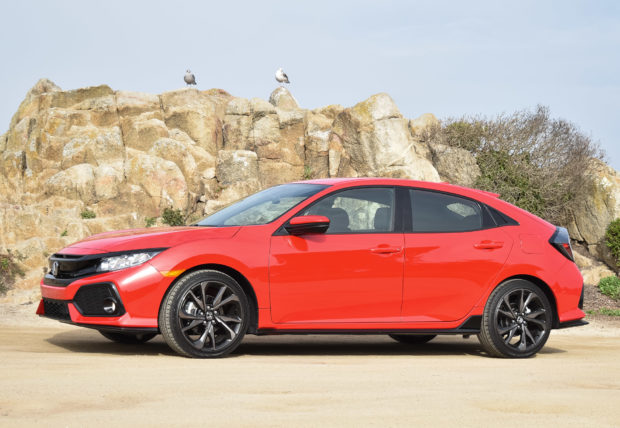 In short, the Civic hatch will not disappoint from a performance standpoint. Honda claims a 0-60 mph time of 7.8 seconds with the CVT. I didn’t find the Civic hatch to be a jackrabbit off the line, but I found it brilliant and fun through all other driving conditions, and absolutely enjoyable on the twists and turns of the California back roads. Fuel economy for the EX and LX is 31 city/40 hwy (with a CVT). The Sport and Sport Touring gets slightly less fuel economy with a rating of 30/39. 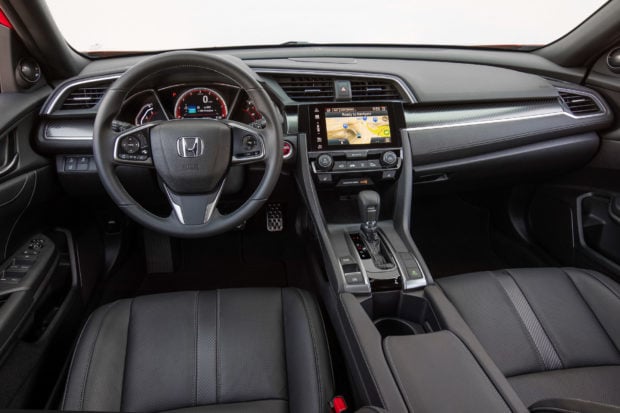 The Civic’s seats are comfortable, and headroom was adequate and the legroom, for front passengers was excellent. The back seat is what you expect from a smaller car. Three adults in the back would be pretty tight, but two average sized adults would be perfectly comfortable with 36-inches of rear legroom. The slant of the hatch styling doesn’t seem to interfere much with the headroom either. 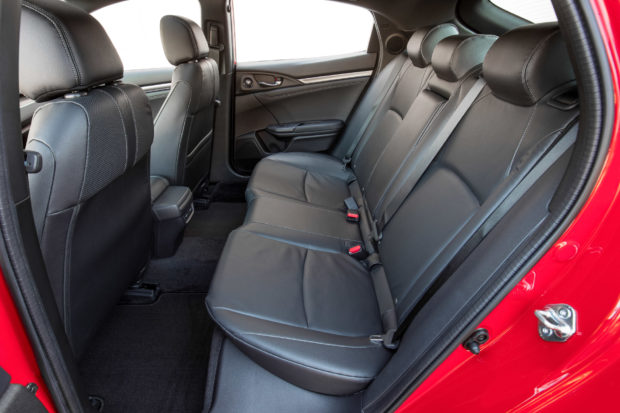 Behind the second row is 25.7 cubic feet of cargo room. And thanks to a simple, but brilliant soft tonneau cover, you can take advantage of that space vertically. The pliable soft tonneau cover can be removed and folded like a windshield visor to maximize the segment-leading cargo area. 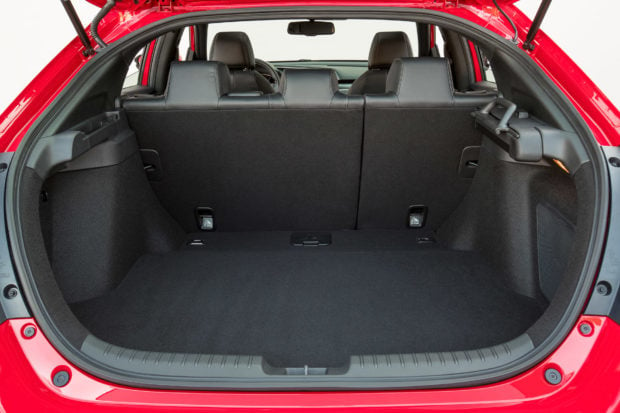 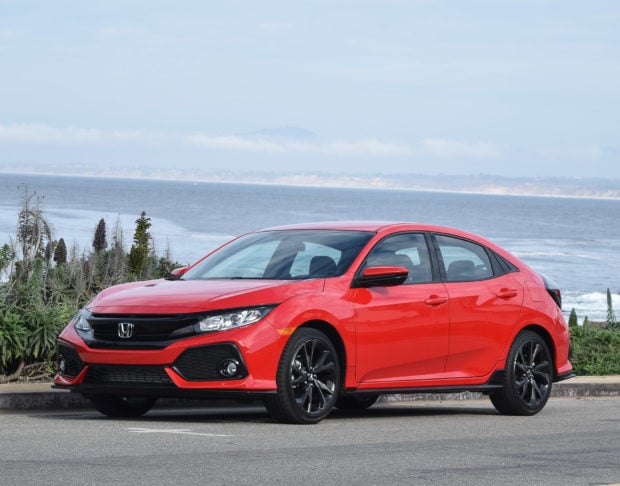 There will be four total trims for the Civic hatch including LX, EX, Sport and Sport Touring. All trims, except the Sport Touring are now available. The Sport Touring will be available at the beginning of 2017. Pricing starts at $19,700 for the LX manual, with the top of the linke Sport Touring going for $28,300, and all the other variants stacked somewhere in between.