Producing 558 horsepower and 482 lb-ft. of torque, the “DeathKart” is one of the nuttiest takes on steampunk engineering we’ve ever seen. Built by dedicated drift fanatic Mike Perez and the guys over at Pennsylvania-based mod shop Speed Warhouse, this insane machine is what happens when a track car bumps uglies with a dune buggy.

What started life as a 1991 Nissan 240SX drift car has been retrofitted with all kinds of crazy crap, including early 1990s Altima and last gen Supra tie rods, custom formed scrapyard metal,  a 1JZ-GTE Supra motor, and a .50 caliber machine gun. Complete with 35-inch Super Swamper tires in the rear, and TEIN coilovers on all four corners, this is one mean machine that begs to be beaten. 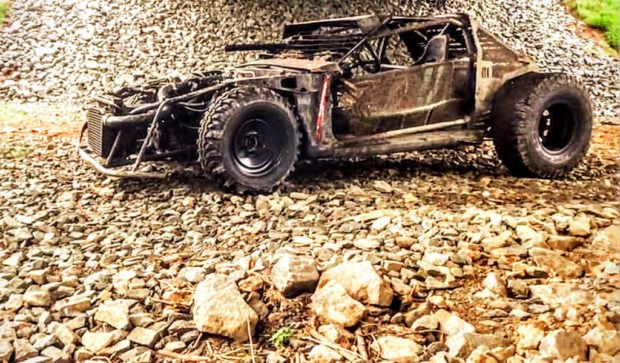 And beat it they do. As the company’s video illustrates, this isn’t just some publicity stunt designed to attract internet gawkers and earn social media sexy points. Perez drives the piss out of this thing, and he has the YouTube documentation to prove it. Snow, asphalt, mud, and a mix of all three are all up for destruction, because nothing says “Awesomer” quite like an ambidextrous DeathKart.

Keep your eyes peeled, because we wouldn’t be surprised to find even more mods on this thing come summer, because for as much fun as it is in the snow, driving it in winter has to blow popsicle sticks. It may not be the final say in demonic off-road aggression, but there’s no way we’re going to be the ones to tell it that, thus giving further reason to refer to it by its given title.