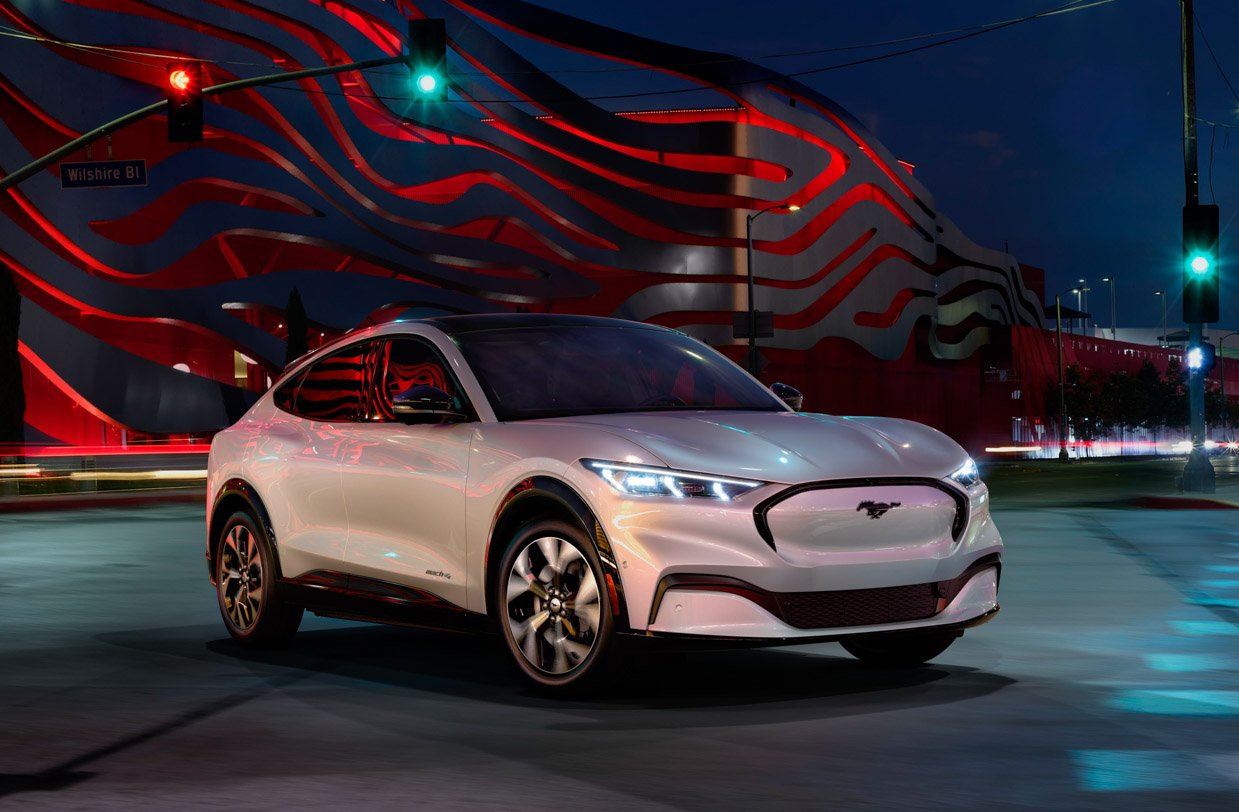 After months of hype, Ford has finally pulled back the covers on its pure electric crossover, the 2021 Mustang Mach-E. This EV may borrow its name from Ford’s pony cars, but other than a couple of nods to the Mustang’s design, the Mach-E is truly its own thing – more Jaguar I-Pace than American muscle car. But names aside, the Mach-E definitely will raise some eyebrows.

Designed to offer a spirited and balanced ride, the Mach-E will offer both rear-wheel and all-wheel drivetrain options. Both a base battery pack and an extended range pack will be available, offering a driving range between 230 miles and 300 miles. Measuring in at 186″ long and riding on a 117″ wheelbase, it’s just a tad smaller than a Ford Edge, but decidedly more sporty looking. 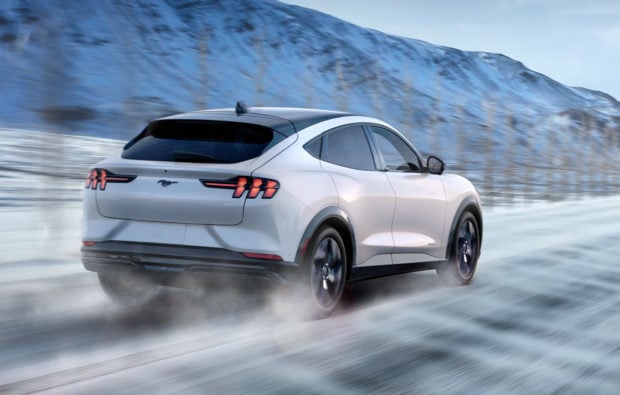 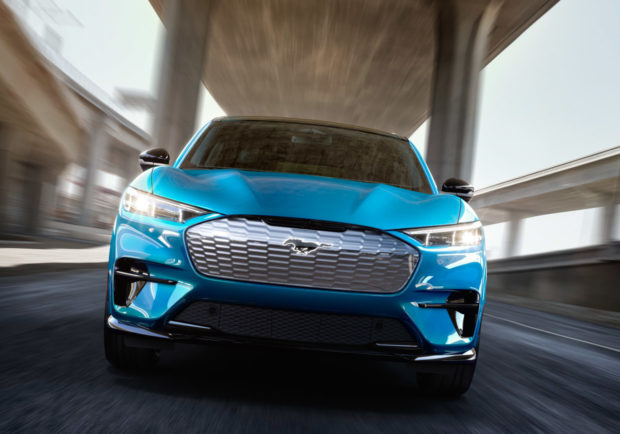 The design of the Mach-E mimics elements of the modern Mustang, with its squinty headlights, and wide, hexagonal grille. But as an EV, there’s little need for a ventilation in that spot, so the grille continues to be a challenge for designers. Depending on the model you go with, it’s either a shiny body-colored panel, or in GT trim it gets a pattern that’s more reminiscent of a traditional grille, so I find that version more appealing. 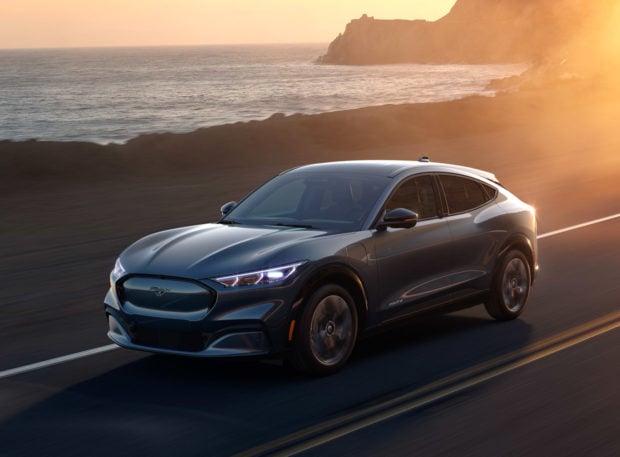 Inside, the Mach-E is definitely more Tesla than Ford, with its minimally styled space, and large 15.5″ center screen, running a next-generation version of Ford SYNC. The instrument panel is also fully digital, and there’s a dearth of physical controls inside the car. Personally, I’m not a huge fan of displays that stick out of the dash like this, as I think they could be better integrated. That said, Ford promises an interface that will be easy and familiar to anyone who uses a smartphone or tablet. 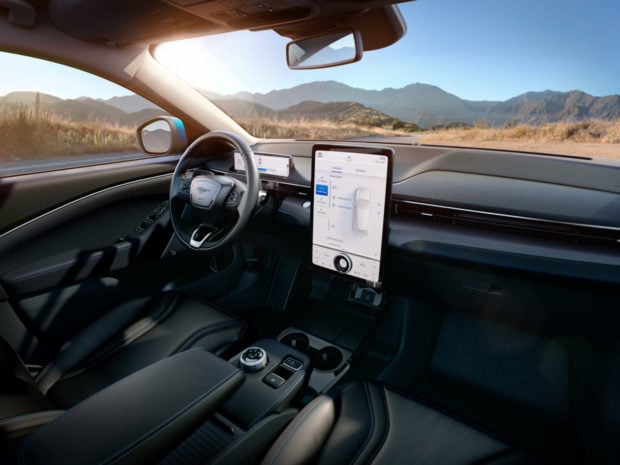 There’s seating for five adults, and the clever roof design gives the Mach-E a fastback look without sacrificing much headroom in the back. Opt for the fixed panoramic glass roof, and I’m sure the space feels even more spacious. 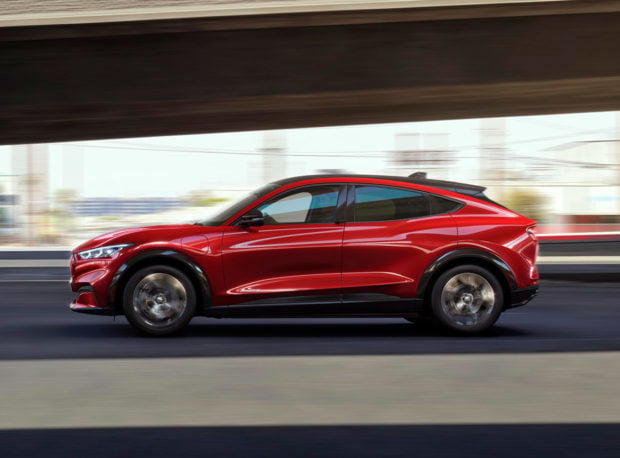 Cargo space is good for a vehicle like this as well, with 29 cubic feet behind the back seats, and 59.6 cubic feet with the rear seats dropped. That’s in addition to the 4.8 cubic feet you get in the front trunk, which is enough space for a cooler or a couple of backpacks. 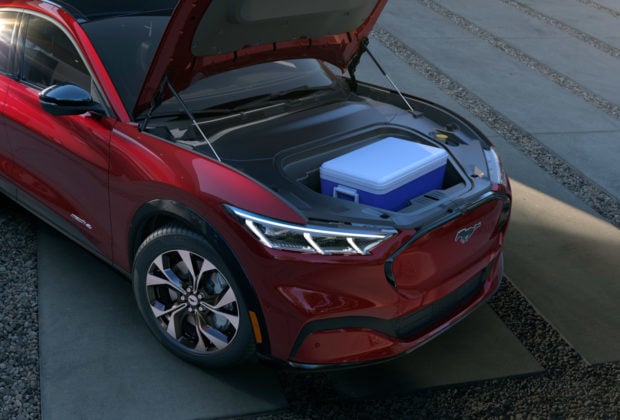 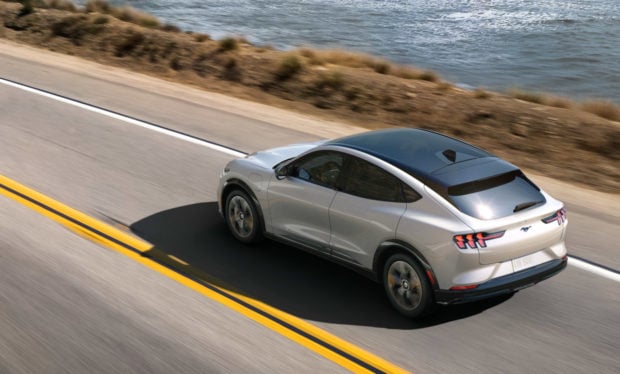 If you’re sold, you can configure your own Mustang Mach-E now over on the Ford website, where a $500 deposit will secure your place in line for a vehicle when it’s released.