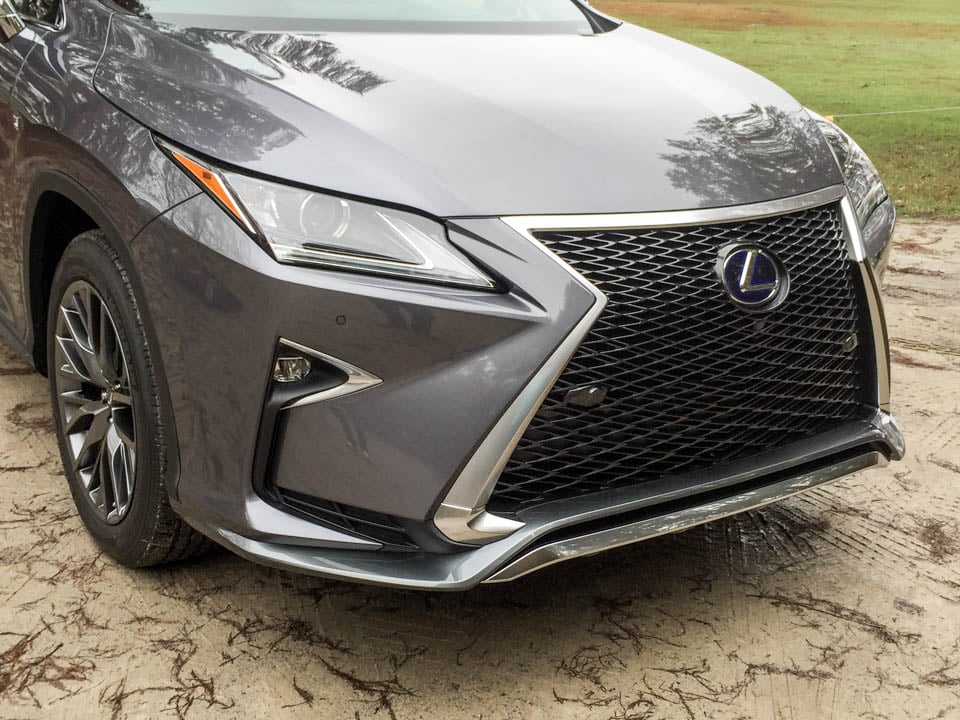 Let’s be honest, most hybrids are not thought of as very exciting. In keeping with 95Octane’s motto of “Cars that Don’t Suck,” we decided to cover a hybrid that adds some excitement and sportiness to the genre. The Lexus brand is conservative, and so too is there top selling RX SUV. Frankly, previous generation RX vehicles were dull and unexciting to drive.

For 2016, Lexus gave the entire RX line a major redesign, and one of the most drastic changes is the addition of Lexus’ popular F-Sport trim to the RX450h (hybrid). Given the added performance of today’s hybrid systems, combining the sporty handling and visual appeal of the F-Sport with hybrid tech seems like a win-win. 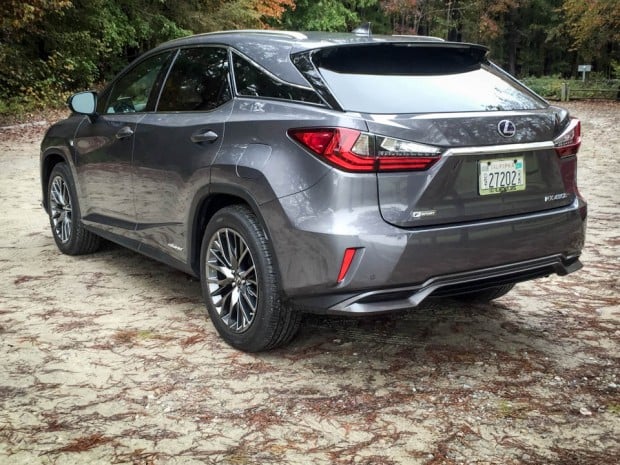 We’ve already discussed the new generation RX350 here, so for this first drive review, we will focus only on the 450h, both the standard one and the F-sport. I got to drive the RX450h recently at a drive event in Raleigh, North Carolina.

Similar to the RX350, the 450 gets a complete redesign that is drastic. The most dramatic of which is the front end. The grille is big and aggressive. Other journalist friends at the drive event felt the design was too bold, and too stylized. I see their point as there is a lot of styling going on with the new RX. However, I appreciate Lexus going the extra distance and adding flare to what was previously a ho hum vehicle. They likely would’ve been criticized if they had played it too conservative with not enough drama. 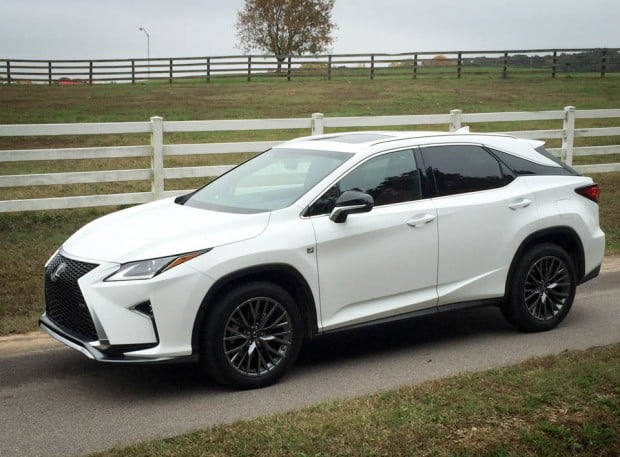 So I give them credit for making the RX bold, from the grille to my favorite feature – the floating roofline. The side styling flows well from front to back, and overall, the appearance of the RX certainly pushes the envelope – especially for a car that is Lexus’ bread and butter.

By adding the F-sport trim to the 450h, this model gets exclusive features like 20-inch dark chrome wheels. The black headliner makes it look even more aggressive and bolder. The F-Sport styling is my favorite, but for those who feel Lexus has gone too far, may want to opt for the standard 450h, which doesn’t get the full treatment which includes a unique fascia, front bumper and rear bumper. 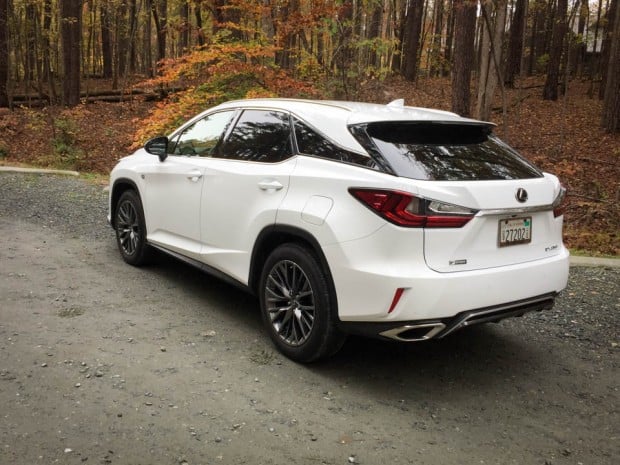 The 450h is powered by a 3.5-liter direct injected V6 engine with electric assist. This engine makes 259 horsepower, but the 50 kW electric motor assist adds another 67 horsepower for a total of 308 hp. And therein lies the charm of the 450h. It’s both fuel efficient with its hybrid technology, which includes a nickel hybrid battery pack (which is smaller, and allows for more rear seat cushioning than before). The engine is peppy off the line and well powered at higher RPMs. For the AWD version (F-Sport), there’s a torque distribution feature that helps distribute power at a 50/50 ratio.

Rather than just cosmetics, the 450h and 450h F-Sport are two different vehicles when it comes to handling. With F-Sport, this hybrid becomes firmer on the road with an adaptive variable suspension, and the steering gets sportier and more responsive. Also, paddle shifters give it a little more sport appeal, even though I find them to be completely pointless in most vehicles – especially in a CVT-based hybrid. With a driver select mode, you can also change the throttle response and overall steering performance. Drivers can select between Eco, Normal, Sport and Sport +, plus certain settings can be saved to make the 450h F-Sport a personalized driving experience. This is a phenomenal feature of the 450h F-Sport and really makes it fun to drive. 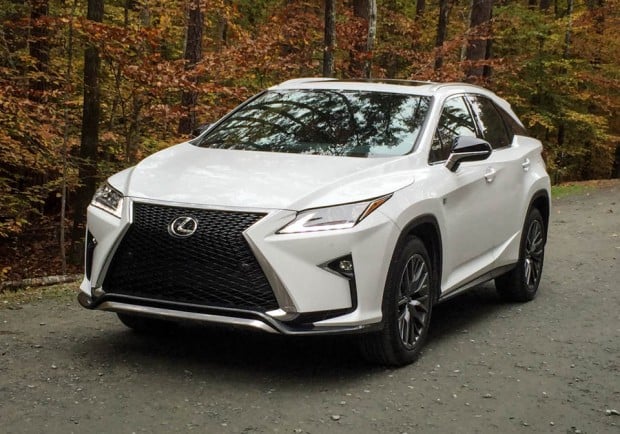 The 450h is available as both front-wheel drive and all-wheel drive. The F-Sport is only available in AWD, and is certainly the one I prefer of the two. The handling is superb and it has a more rugged feel.

As is the case with all Lexuses, the RX450h is quiet. Although the F-Sport package has an active sound generator which provides a bigger exhaust note in the cabin, one I’m not accustomed to with the Lexus brand, and it’s especially difficult to accept in a hybrid. Additionally, road noise seemed to come in a bit through the panoramic moonroof, which is a new feature for the RX.

Inside, the RX450h is much improved. It feels more luxurious than the previous generation. Soft touch points are found throughout, plus the brushed nickel accents and ambient lighting are an elegant touch. Adding the F-Sport package puts special badging on the steering wheel and the door sills as well as special racing-style F-Sport seats. Generally, these type of seats aren’t that comfortable, but the F-Sport seats have a great angle for both back comfort and driving vision. 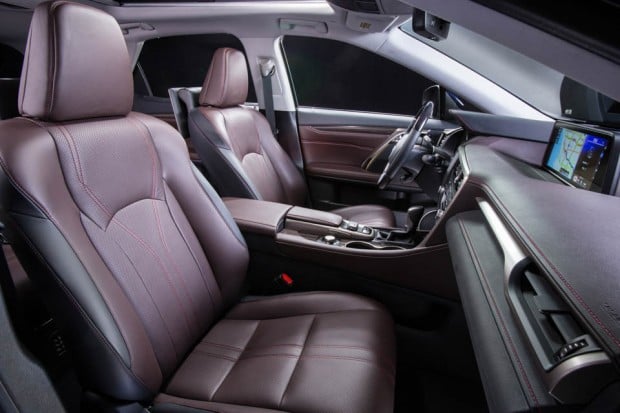 The optional 12.3-inch touchscreen is impressive. While it’s certainly big, it’s not intrusive as it spans the top of the dashboard more horizontally than vertically and doesn’t interfere with the line of sight. Lexus revamped their remote touch interface, by eliminating the awkward scratchpad, and bringing back the equally cumbersome joystick. However, a new feature this year is an enter button on each side of the hand rest that allows you more intuitively navigate through menus and accept screens. You can split the 12.3-color screen into two parts featuring both navigation and audio. And in this capacity it’s superb. There’s also a heads-up display that helps keep driver’s eye on the road ahead. 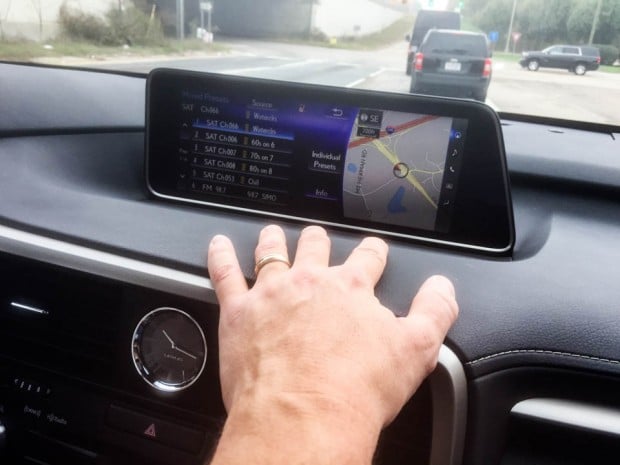 The 60/40 rear folding seats provide plenty of legroom and headroom for up to three passengers. Rear seats will be comfortable for even those taller passengers. Access to the rear power liftgate is enhanced with a gimmicky feature that allows keyless entry. By having the key fob on your person, simply place your hand, or even your arm or head over the rear Lexus logo and the back door will open. This is a similar feature to other SUVs that have keyless entry. It’s a fun feature to show off and play around with, though I don’t know how much I’d use it.

Fuel economy for the FWD RX450h is 31 mpg/city and 30 mpg/hwy, and with the AWD F-Sport it is 30/28. So with this five-passenger SUV, you get hybrid fuel efficiency mixed with the fun and sportiness of a European SUV. Throw in bold looks, and the 2016 Lexus RX450h is a hybrid that we can embrace.

When Lexus set out to redesign the RX they followed the design concept of seductive strength. I believe they hit that mark as the RX is bold, sexy but also looks big and durable. The F-Sport adds even more sex appeal. 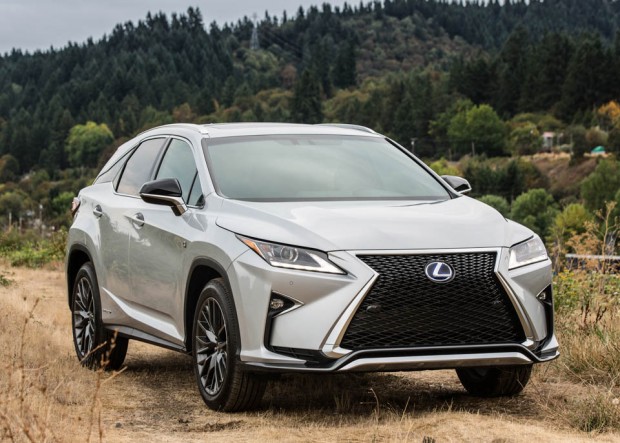