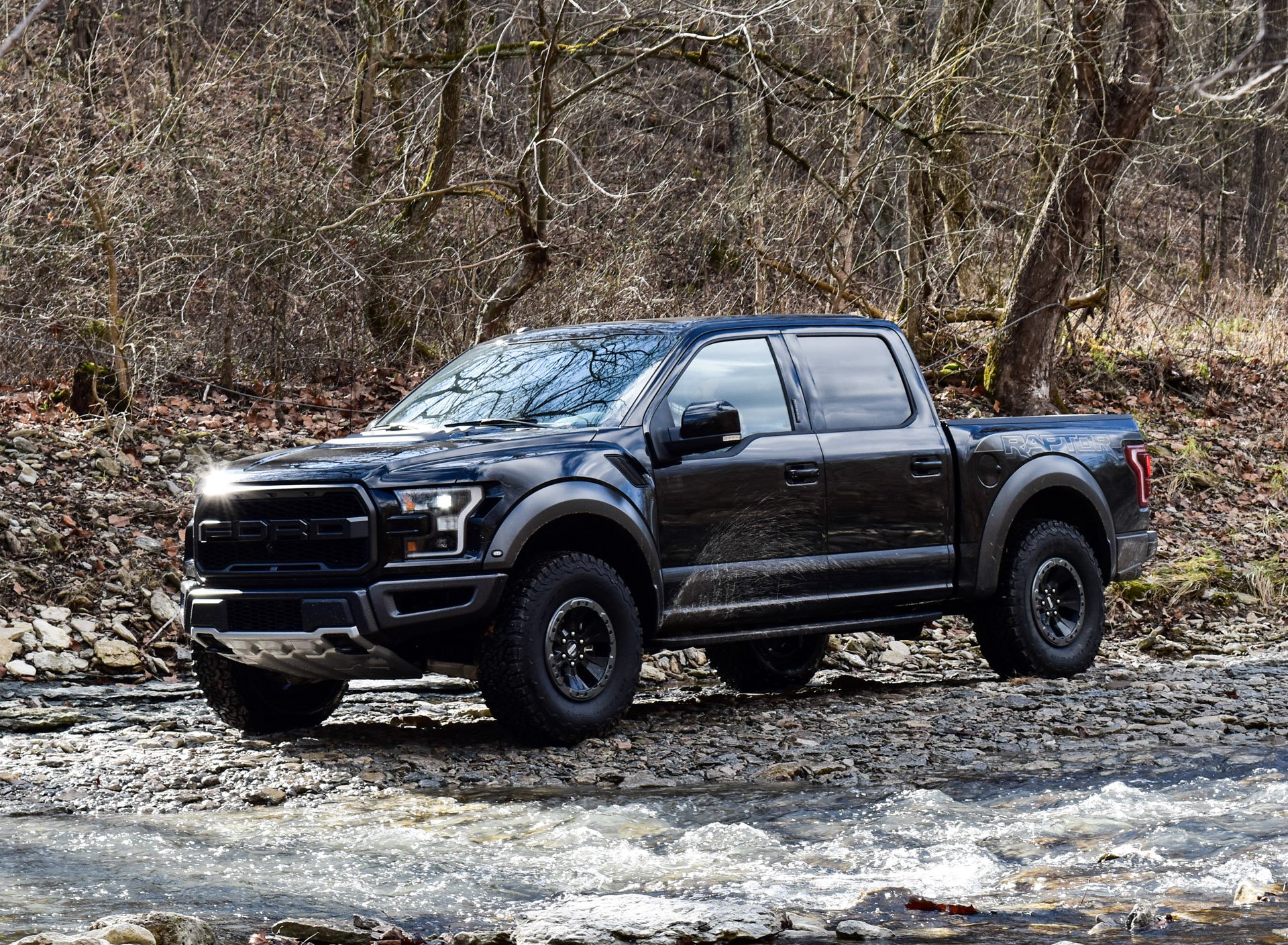 “Special” is a word often thrown around haphazardly. It’s one step above “unique.” As an auto journalist, I only pull out that word on rare occasion. Because, let’s be honest, many of the vehicles I review are forgotten about the moment I turn the keys back in. Rarely does the memory linger. When fond memories of the time spent with a vehicle hang with me, that’s when I use the “S” word, and it’s coming out for this week’s vehicle. Hey, I could’ve been punny and said “Raptorous,” so give me some credit, okay? 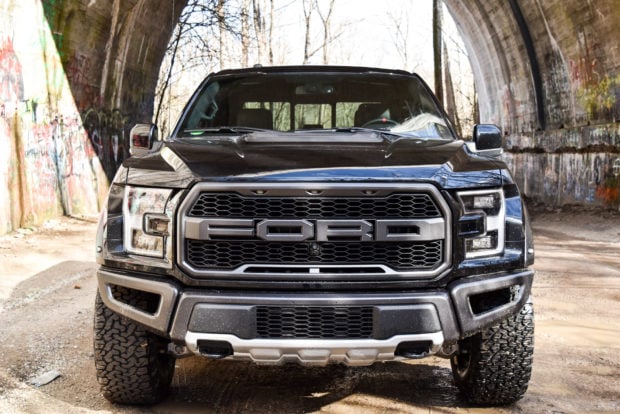 The 2017 Ford Raptor is indeed special. There aren’t enough adjectives and superlatives to describe it, so I’ll stick with special. The Raptor is the performance/off-road trim of the top-selling F-150. I’ve seen my fair share of amazing pickup trucks, but the Raptor is the cream of the crop. It’s rugged, sexy, and has 450 horsepower. It can blaze a trail on tarmac and tear through a trail off the road too. It’s equally comfortable in the asphalt jungle or in an actual jungle. 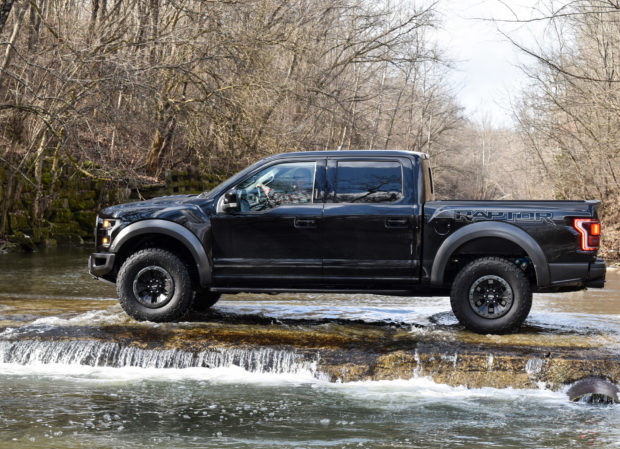 And the week I spent with it, I tried it both on the road and off the road. In all conditions, the Raptor was amazing. 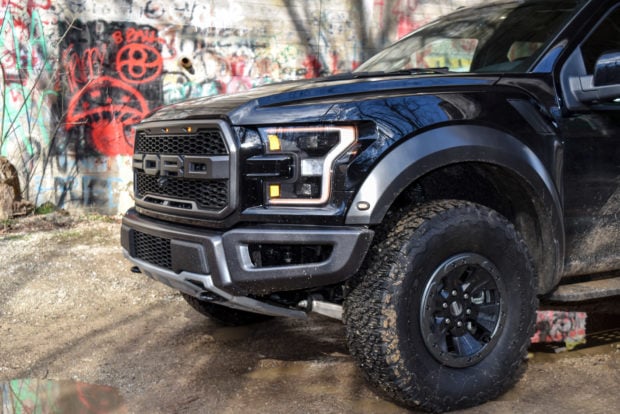 The Raptor may be an F-150, but it certainly doesn’t look like an ordinary one. The front end is mean and aggressive. Ford is boldly emblazoned on the grille but doesn’t have the blue oval that’s synonymous with tough trucks. Rather than chrome, there’s blacked out lettering and trim around the front end. An angled skid plate shows off the off-road readiness, and gives the Raptor a less boxy front end than the standard F-150. My tester was black on black and added to the overall sex appeal of this truck. 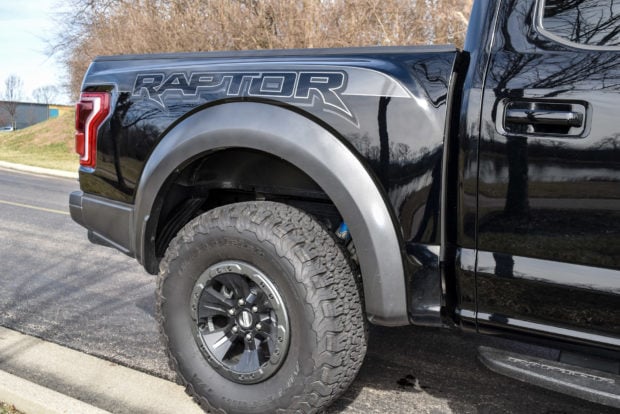 17-inch rugged wheels give it a tall posture, further accentuated by the blacked-out wheel well housing. The 5.5-foot truck bed gives it a stubbier look than the F-150, but the aggressive design continues on the back side of the Raptor too. The word Raptor, in a cool font, hangs over the embellished and functional back wheel well. Drop the tail, and a small step folds out from the gate, allowing for quick access to the bed, which has a durable coating to prevent scratches, dents, and dings. 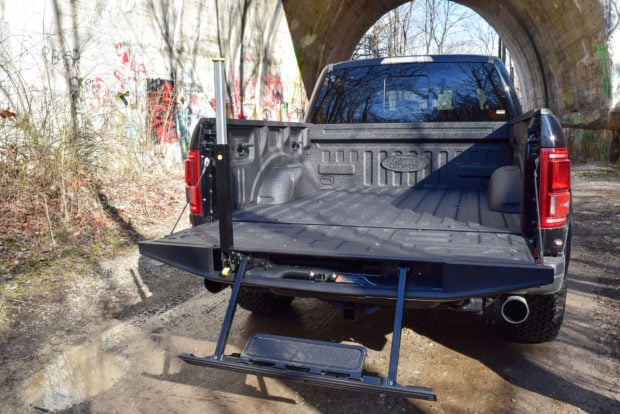 The looks aren’t the only thing are special about the Raptor. This year’s Raptor replaces a V8 with a twin-turbocharged Ecoboost V6 engine. The 3.5-liter engine makes 450 horsepower and 510 lb./ft. of torque. The engine doesn’t growl as you’d might hope or expect, rather it just gives you everything you need whenever you want it. 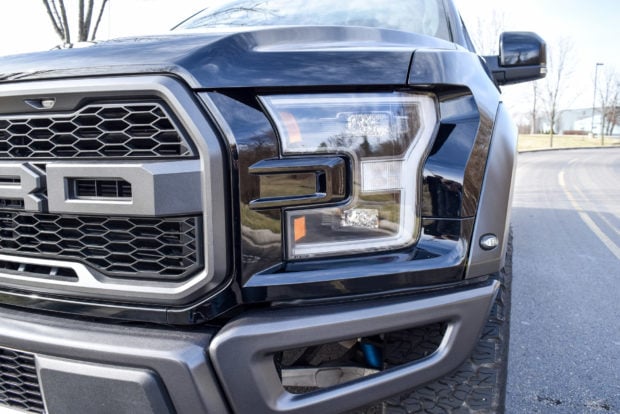 The 10-speed automatic transmission is fantastic too, and there’s no turbo lag at all. The Raptor is fast off the line, and smooth at accelerating quickly through the gears. In fact, it has a 0-60 time of 5.1 seconds. That’s muscle car range there! It’s unbelievable to imagine all that power comes from a non-diesel vehicle that weighs more than 5,500 pounds. 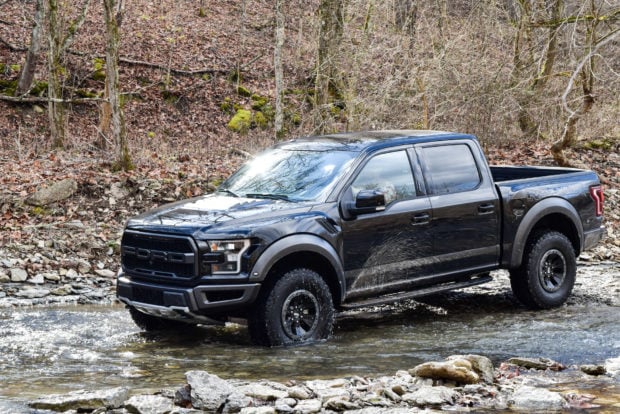 By adding the Ecoboost V6 and eliminating the gas guzzling V8, as well as dropping nearly 500 pounds from the previous model, the Raptor manages to improve its fuel economy. The Raptor has an EPA rating of 15 mpg/city and 18 mpg/highway. In a week’s worth of driving (and I drove it hard), I averaged 15.8 mpg. However, this truck is so much fun that you won’t pay attention to the fuel economy.

On the highway, it’s composed, but is easy to get it to highway speeds quickly and smoothly. Despite the rugged tires, it’s a comfortable truck to drive. It is a little harsher than a standard F-150, but also tackles potholes more smoothly thanks to its big 3.0 inch FOX racing shocks. 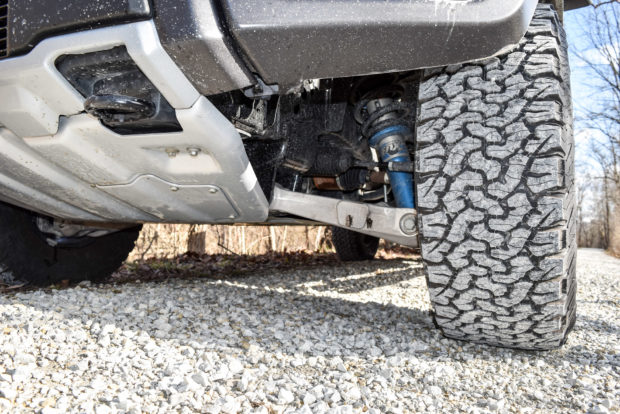 I took it off-roading, and it traversed a rocky creek bed with ease. Gravel roads and rocky hillsides were no match for it. I got mud all over the tires and the side, and then washed it off with a trek through a creek. The Raptor was right at home in this environment, and despite all that horsepower, the wheels maintained control and there was no spin or control issues. It’s rare to find a vehicle that combines performance and off-road ability this well. There’s a terrain switch that allows power to shift to different wheels based upon the terrain (sand, snow, etc.). I actually never needed to switch into a different mode and only went into 4H in order to have this kind of fun. There is a locking differential for even more rugged challenges. 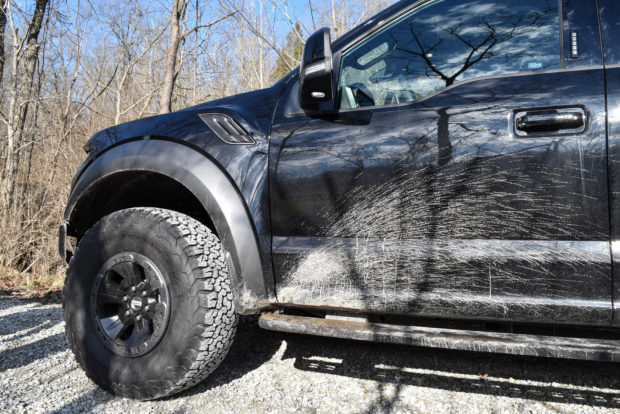 The Raptor has a maximum towing capacity of 8,000 pounds, which is a bit less than the standard F-150’s maximum available, but that’s not the main reason you buy one of these. A trailering package is also available that includes Ford’s Pro Trailer Backup Assist.

Inside, the Raptor is spacious and comfortable. Ford excels at offering lavish truck interiors, and the Raptor doesn’t disappoint. The truck is available in both Super Cab and Super Crew, the truck reviewed here. Three passengers can comfortably sit in the back seat of the Super Crew, which has 43.6 inches of legroom and 40.4 inches of headroom. 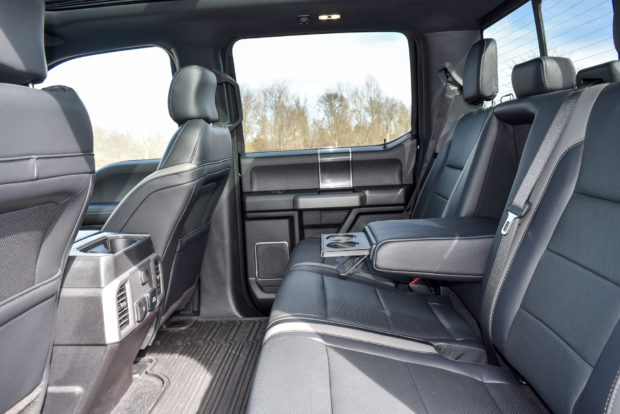 Underneath the second-row seat is a useful storage area. The seat also hoists upward in a 60/40 split to further enhance storage capabilities with a flat load floor. A twin-panel moonroof is an option as is a leather-wrapped steering wheel and gear shift. Paddle shifters and carbon fiber accents show the truck’s aggressive side, and there’s an electrically-opening rear vent window. 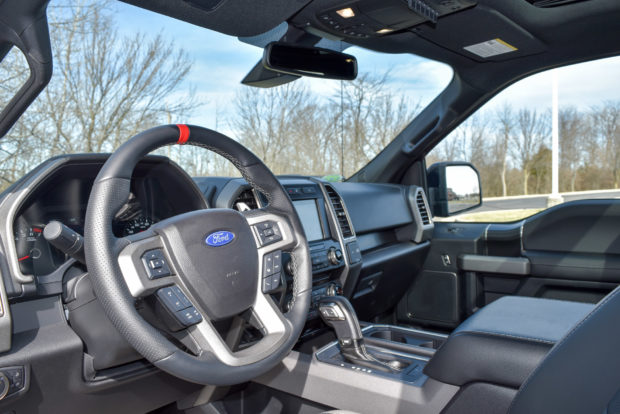 The Raptor is equipped with the much-improved Ford Sync 3 system. After much criticism, Ford has a solid infotainment system. The touchscreen is responsive and the entire center stack is clean and well organized. 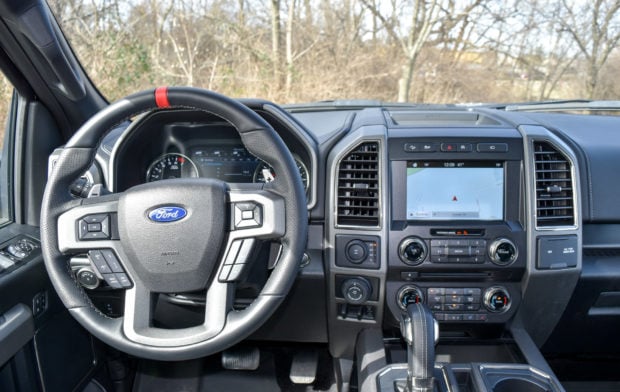 Base price of the Raptor, with no options, is $51,310(USD). However, my tester was loaded with extras and options including the aforementioned moonroof and tailgate step. Also, the Raptor had the trailering assist package, sensor-based technology including adaptive cruise control, and the spray-in bed liner. With all these options, my tester had a final price of nearly $68,000. That’s a big jump in price from the base price, but as is the case with most trucks, you can option it so many different ways that it’s almost like an a la carte order for a custom truck. 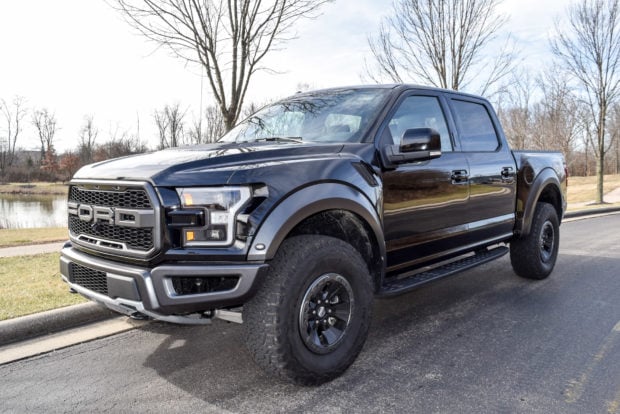 The Ford Raptor is the type of vehicle I’ll remember for a long time. It showed its versatility on the road as a day-to-day driver, but also showed it loved getting off the beaten path and getting muddy. And it does all with 450 horses underneath the hood. To me, this is one of the most ideal trucks available. If anyone would give me $68,000, I’d buy one today. Yes, the Raptor is… what’s the word I’m looking for, oh yeah… Special.