2018 Ford Mustang EcoBoost Review: Half the Cylinders, 90% as Much Fun 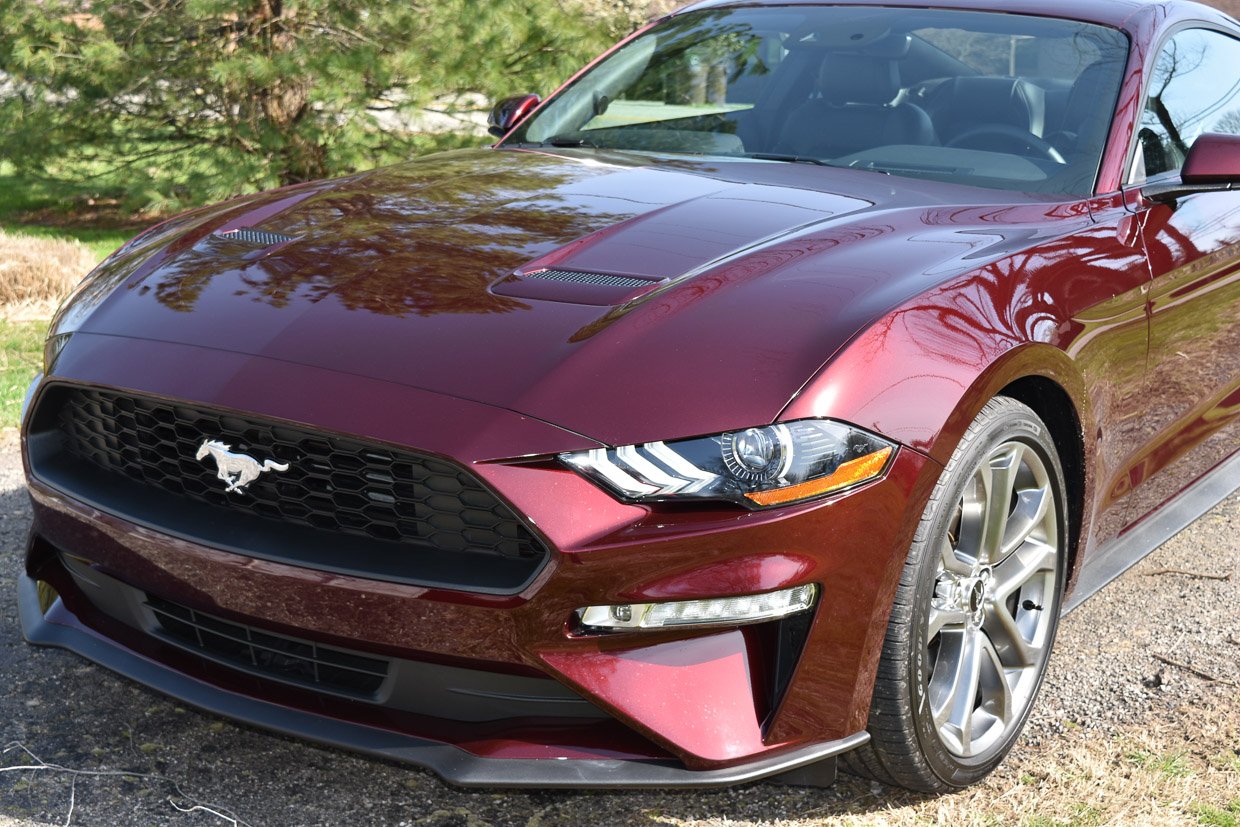 My test car this week is very near and dear to my heart. It’s iconic to everyone, not just to me. This week I’m reviewing the 2018 Ford Mustang. It’s not a rare car. Heck, they’re everywhere. But, say what you want about the Mustang, but everyone knows a Mustang enthusiast who will surely talk your ear off about their beloved pony car. Me, I’m not so much an enthusiast, as a historian of the ‘Stang. Later this summer, my first ever book, Mustang by Design, comes out nationwide (available now on pre-order through Amazon). It tells the tale of someone I know well, my friend Gale Halderman, who was the original designer of the 1964 ½ Mustang. So, as I drove this week’s tester, I noted several design features that have survived all these years, from Gale’s first sketch. His legacy lives on in the latest version of Ford’s iconic sports car.

Ford knows the value of the Mustang as a cornerstone to its company branding, thus will continue to produce the muscle car for years to come, despite announcing a discontinuation of most of their car line. The Mustang, which has stood the test of time and continuously evolved, will be the last car standing at the Blue Oval here in the US. Gone for this model year is the V6 engine. Rather there’s the ultra-powerful V8 engine and the lean, mean EcoBoosted four-cylinder, which still offers up plenty of muscle. 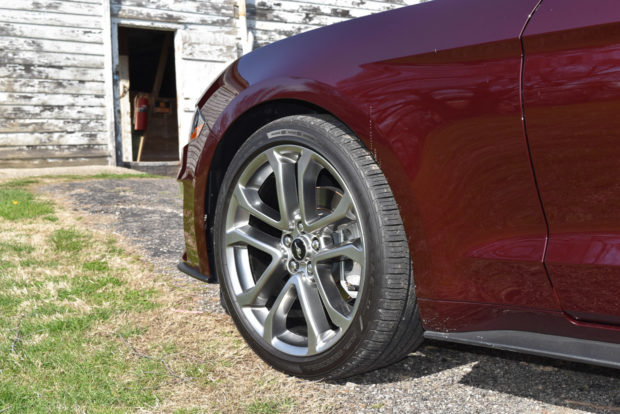 The 2.3-liter four-cylinder EcoBoost engine puts out a lot of power for its size. It has a rating of 310 horsepower and 350 lb-ft. of torque, making it more than worthy of a Mustang emblem. New for 2018 is a 10-speed automatic transmission which is just outstanding. The enthusiasts will demand a clutch, and there’s still a six-speed manual transmission available for the die-hard enthusiasts. However, with the new 10-speed, the Mustang becomes a high-performing piece of machinery. It really compliments the turbocharged engine, plus, it makes the Mustang incredibly fuel efficient, without hurting its power. How can that be a bad thing? 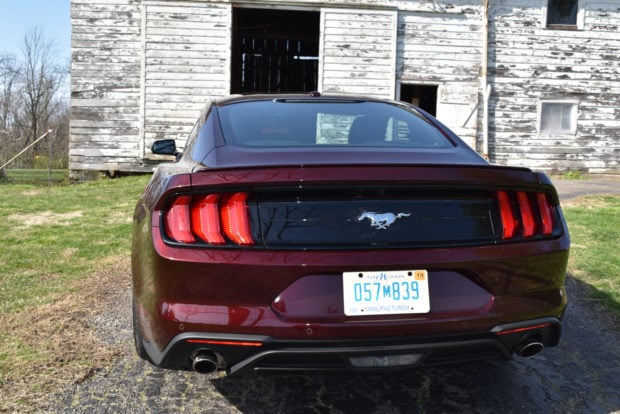 The 4-cylinder Mustang can achieve more than 30 miles per gallon on the highway, and does 21 mpg in the city. In a week’s worth of heavy-footed driving (how else do you drive a Mustang?) I averaged about 25 mpg, which was more than satisfactory for me.

On looks, the Mustang has some refreshed styling for the 2018 model year. It holds true to much of what makes the car so damn appealing. I could bore you with the entire history of its design, but rather, I’ll pronounce that some of the refreshed styling will resonate with the enthusiasts out there. As an old-school guy, I’d love to see the Mustang emblem go back into the corral, but otherwise, that logo remains the same as it was back on April 17, 1964 when it was first launched. The grille is aggressive and the short, squatty posture add to the muscle car appeal. 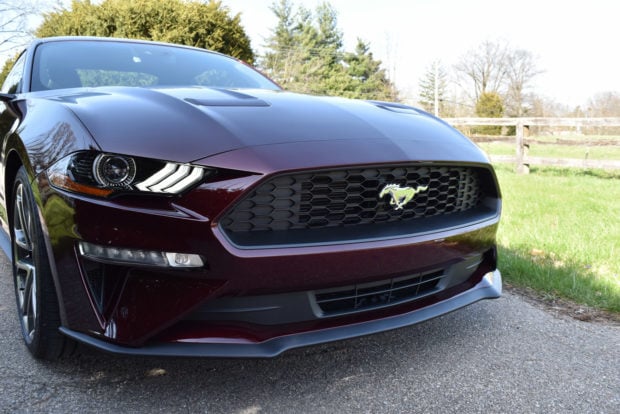 The hood vents also help the Mustang flex its muscle a bit. The three-gill slashes on the LED front headlights are also an homage to the car’s heritage as are the triple tail lights. This was as it was designed by Gale Halderman all those years ago. And, from my perspective, how the Mustang should ALWAYS look. Twin exhaust pipes in the back still show the Mustang’s wild side. The fastback styling is still evident with a sloping C-pillar that leads into a subtle rear spoiler. I suppose could be some sportier elements to make it look more aggressive, but I’ll leave that to the GT, Bullitt, and Shelby editions. 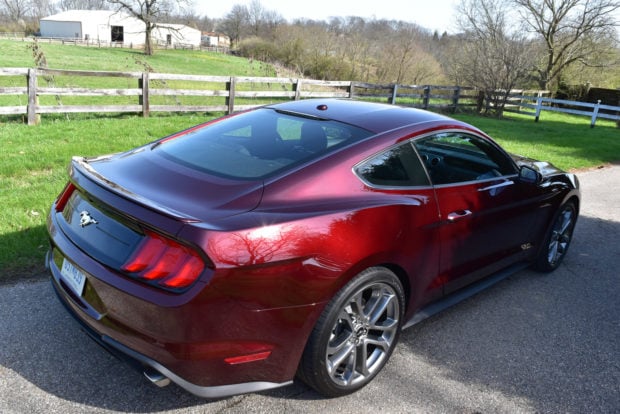 Here’s a funny story, one of many you can read in Mustang by Design. When the first Mustang was unveiled to Henry Ford II by Lee Iacocca, Deuce wanted more room in the back seat. So, Lee instructed Gale to add a little extra legroom. They only added about an inch, but it was enough to get Ford to sign off on the design. That story still resonates today as the only real flaw with the Mustang’s interior is the lack of legroom in the back. It’s still technically a 2+2 car, but the back seat is cramped and uncomfortable even for my teenager. But hey, it’s a muscle car and an icon, it’s not some family hauler. Keeping that in mind, you can appreciate the rest of the interior when compared to some of its competition. 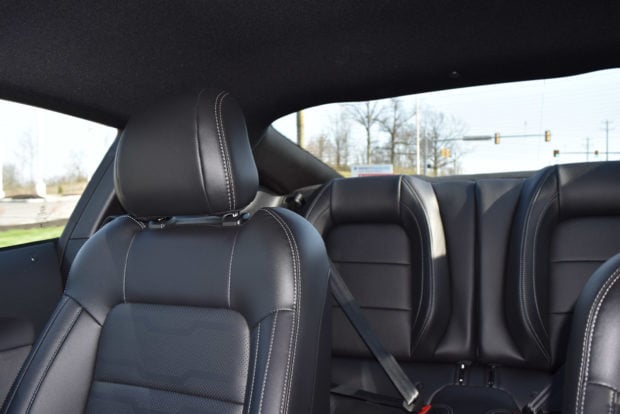 When fully outfitted, the Mustang’s interior is nice and feels like a luxury vehicle. The leather trimmed seats have nice stitching to add a premium feel, and the front ones are comfortable with a great vantage point for the driver. The steering wheel has leather on it too. There are some harder materials on the dashboard that take away from the higher-end feel, but overall the Mustang’s interior is a quality affair. Road noise does still enter the cabin, though when driving a muscle car, you want to hear the growl (and yes, there’s still a growl with the 4-cylinder engine).

The Sync III infotainment system is so much better than the previous edition. In fact, it’s vaulted up to one of my favorite infotainment systems in the entire auto industry. The voice commands work great. Syncing to your iPhone or Android device is easy through CarPlay and Android Auto. The the display is fast and responsive to touch commands. There are also plenty of knobs and buttons to provide easy tactile access to functions. It has everything you could want from a technology standpoint and is also intuitive for users. 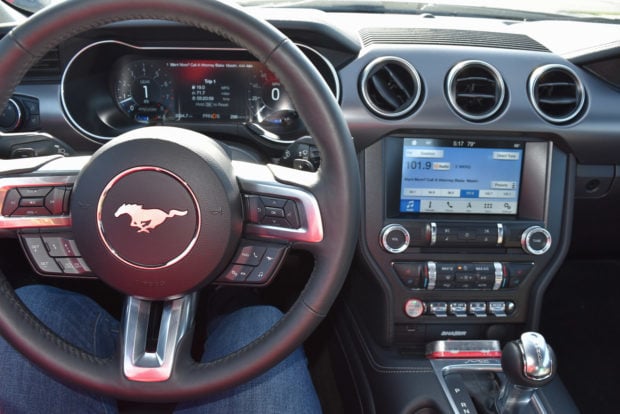 The Ecoboost Premium Fastback Mustang has an MSRP of $30,600. This is a great, competitive price within the segment. My tester came with extra options like 20-inch aluminum wheels, an upgrade sound system, enhanced safety package, and the 10-speed automatic transmission has a $1,595 upcharge too. All told, my tester had a final MSRP of $39,770 which is a far cry from the “$2,368 FOB Detroit” of the original Iacocca Mustang. 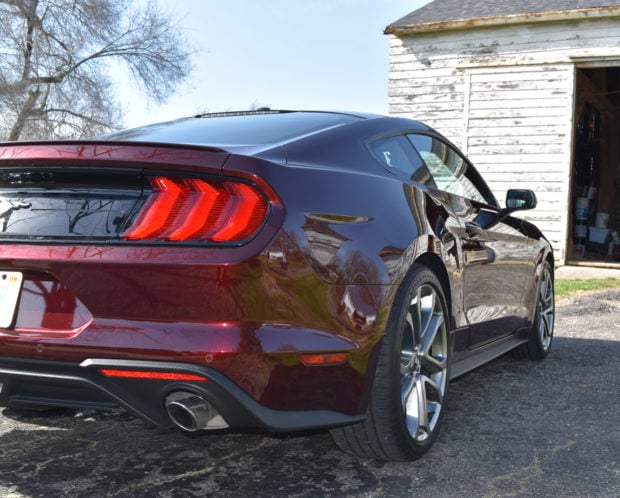 On the Mount Rushmore of automobiles, the Mustang is chiseled in granite as a true legend. Throughout its 50+ year history it’s gone through numerous changes. But it’s also stayed true to much of what’s made it great in the first place. Fast, fun and amazing looks. That’s the Mustang, and it’s by design.