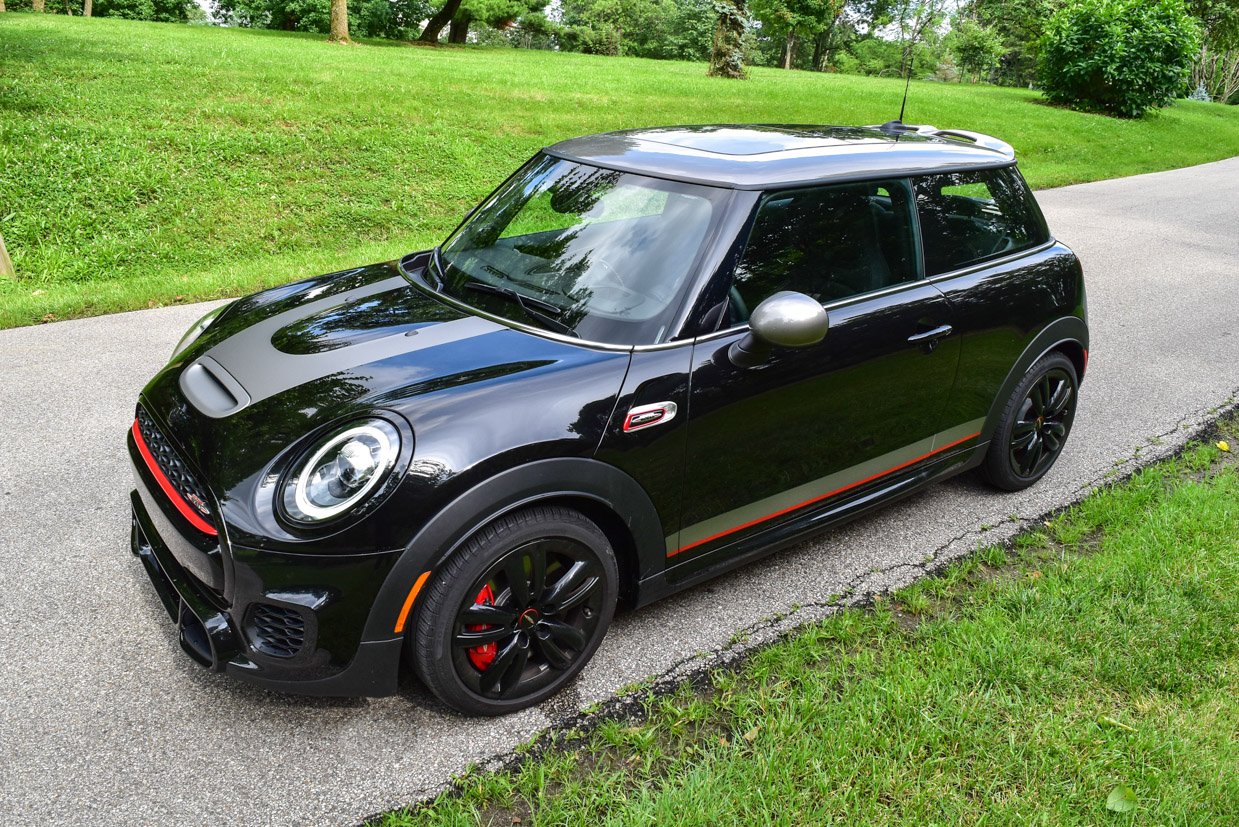 In general, the subcompact segment lacks personality and standouts. It’s basically the Nickelback of car segments. Sure it might be popular, but it’s pretty darn lousy, and lacks in creativity. Thank goodness for the uniqueness of the MINI and its fun-to-drive nature to make this vehicle a real standout. 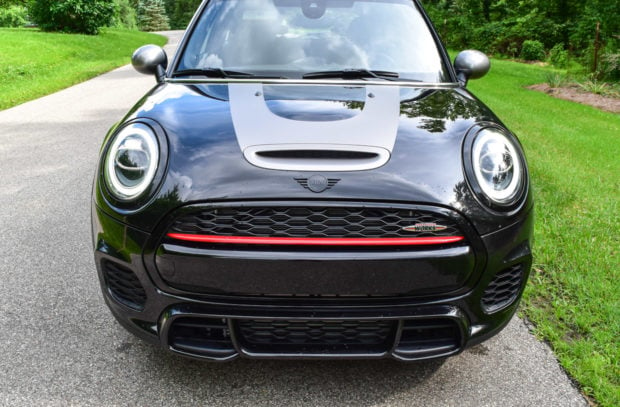 MINI JCW has a truly distinctive look. The squatty vehicle has the iconic MINI front end with its small mouth-like grille and the round headlights. My tester had a blacked-out grille with red racing accents and a large gray hood scoop. That motif continued on the side with the red and gray accents streaming on the bottom toward the back. The gray hardtop roof made it even more congruent and aesthetically pleasing. A protruding spoiler finishes off the look with a real sporty vibe. The dual exhaust is downplayed on the back with rectangular taillights flanking the stylish back. The Union Jack (U.K. flag) is patterned in the taillights giving a tip of the hat to its heritage. 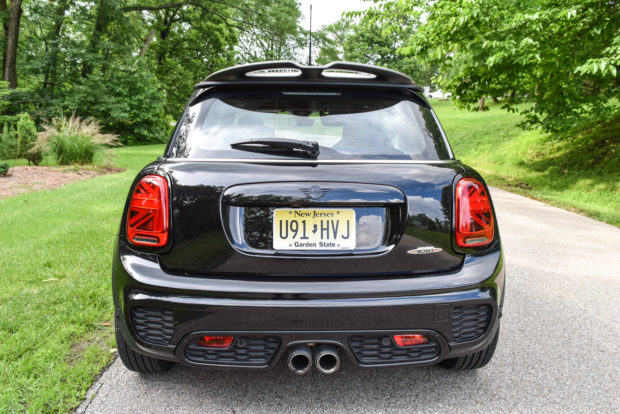 A 2.0-liter turbocharged 4-cylinder engine replaces the 1.5-liter 3-cylinder engine that comes standard on the MINI Cooper. The MINI JCW gets this turboboosted engine which makes 228 horsepower. A six-speed manual comes standard that would surely appease enthusiasts. All MINIs tend to have go-kart-like handling. But my tester, which also had the optional six-speed automatic transmission, was like a Mario Kart-like go kart, and the responsive steering offered loads of fun. This athletic vehicle gets a performance focus thanks to its JCW sport suspension, MacPherson struts and Brembo brakes. The front-wheel drive MINI Cooper JCW has an EPA rating of 25 mpg/city and 32 mpg/highway, pretty good fuel economy for something with this much of athleticism and performance. In a week’s worth brisk driving, I averaged 26 mpg. 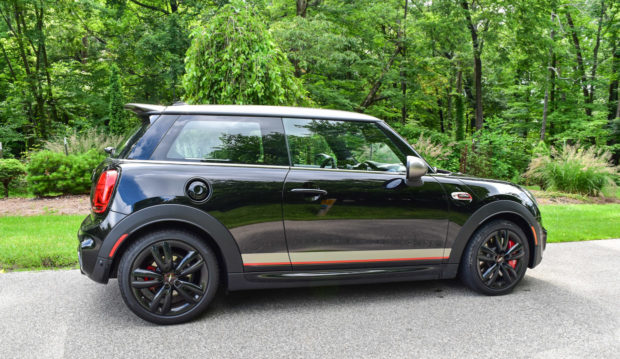 Inside, the MINI continues to beam its bright personality. The JCW package brings extra characteristics like a leather-wrapped steering wheel, a panoramic sunroof, and performance seats. Generally, I find racing-style seats to be uncomfortable for someone in their mid 40s with a dad body. But in this particular MINI, the seats were supportive with a good amount of cushion. They don’t overly hug around, like other more highly-bolstered seats. 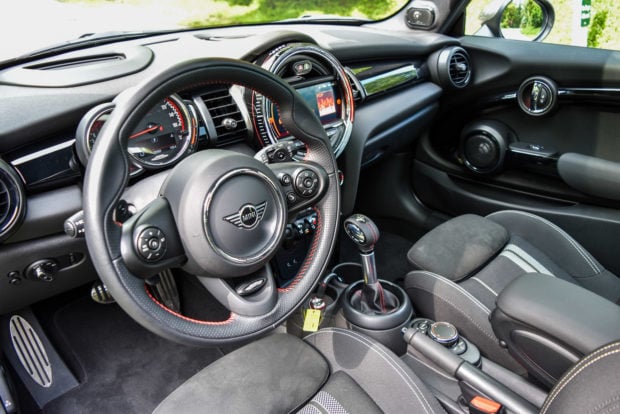 The back seat has room for two adults, although legroom would be a little cramped for longer trips. With the somewhat boxy exterior styling, the rear headroom is outstanding. With the second row in use, the MINI has limited cargo room. There’s just 13.1 cubic feet of room in the back. Fold the seats down, and that cargo area increases to a more admirable 40.7 cubic feet. 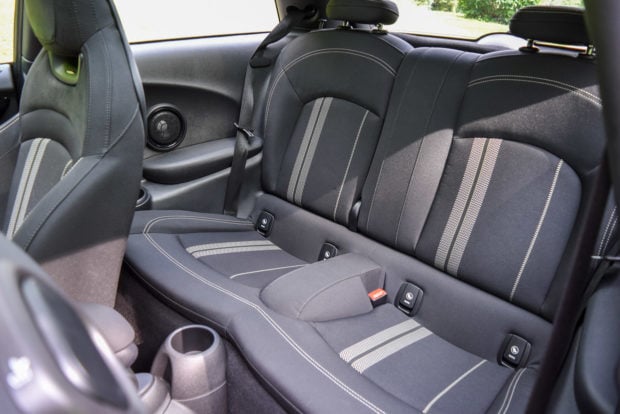 As much as I’m raving about the MINI’s personality, the center stack layout and infotainment system could use a little less of it. The quirky nature of the circular infotainment system and its 8-inch touchscreen dominates the dashboard. It’s a love-hate feeling when it comes to this artsy look. Kudos to MINI for adding color enhancements around this feature that flashes with the sound. That’s a very hip, youthful flare that you don’t find in many vehicles. However, the infotainment system feels clunky. As is the case with many European systems, it’s feels slightly over-engineered. New for this model year is the integration of Apple CarPlay and Android Auto. This helped ease some of the awkward nature of the system. 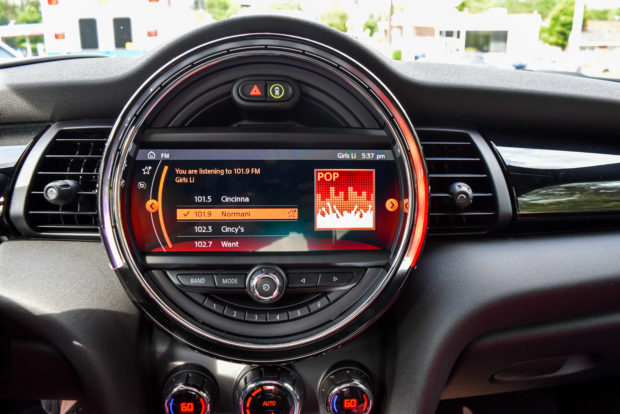 Starting price for the MINI JCW is $31,900, which is fair for such a performance-focused subcompact. However, with the Knights package (which adds 17-inch black spoke wheels and the blacked-out grille), along with an advanced sound system, my tester had a final price of $42,565. So all that personality comes with a price tag. 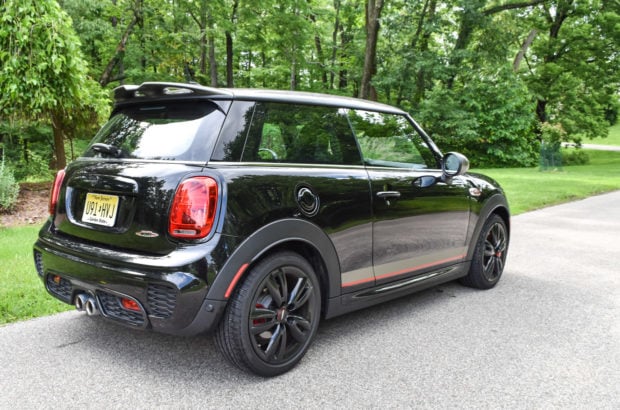 The MINI Cooper JCW is refreshing. It holds true to its heritage with European flare and a lot of quirky styling. It’s a standout on the road and from behind the wheel. The rest of the subcompact segment can’t keep up or outdo the performance in this MINI. 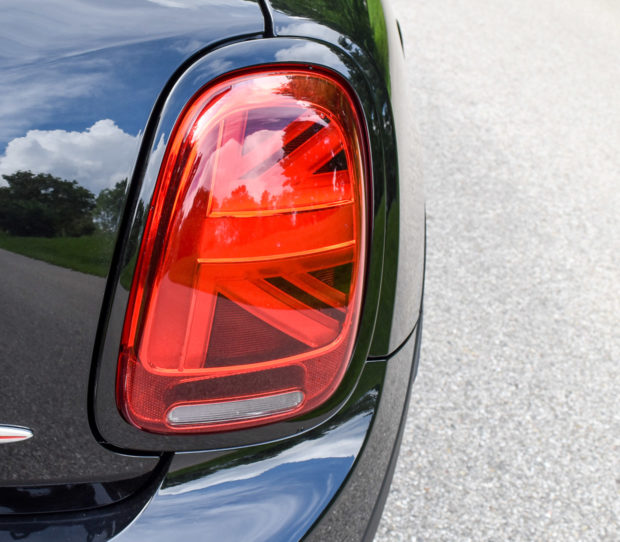