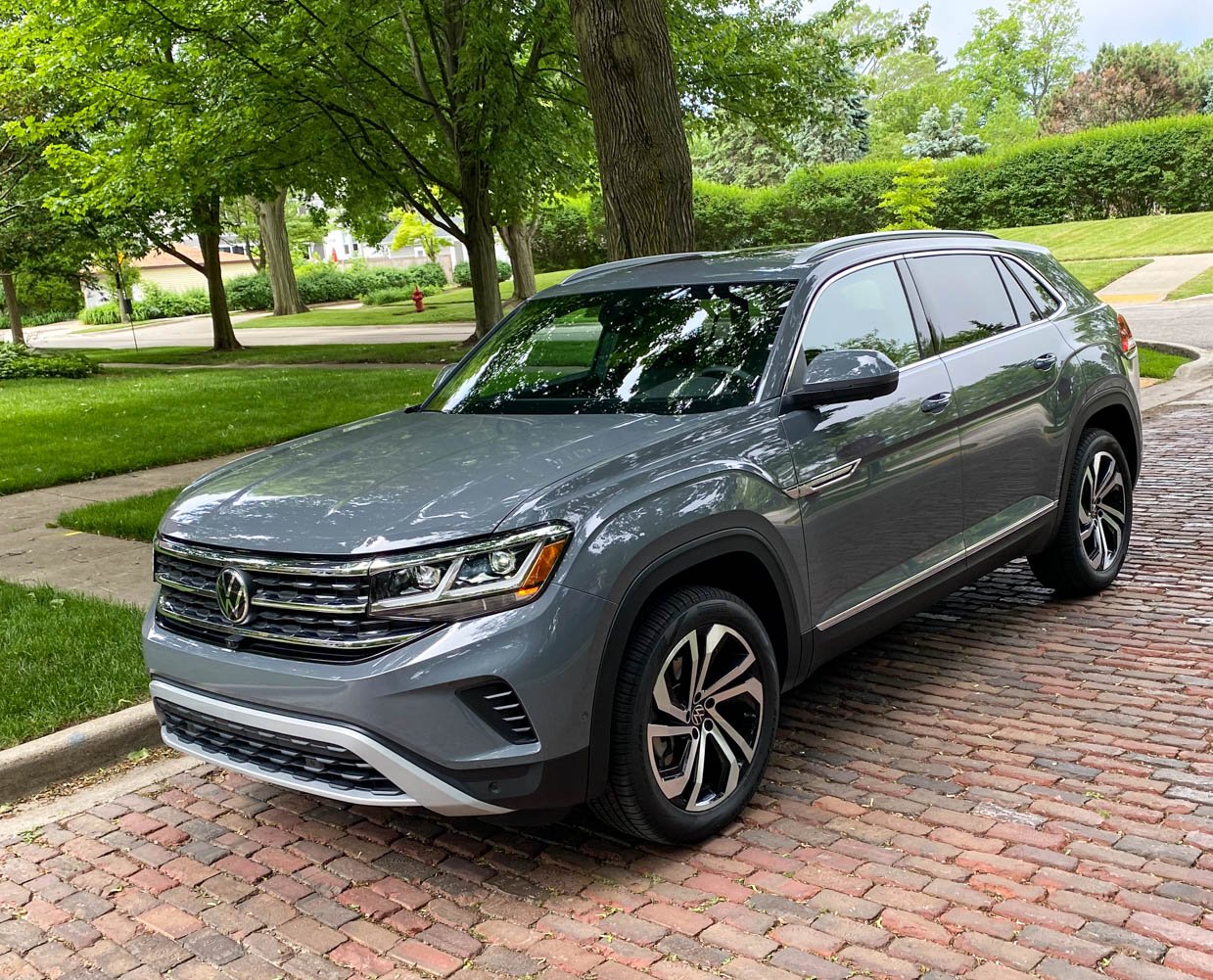 If one statement holds true in the auto industry, it’s that adding the word “Sport” to a vehicle doesn’t make it a sporty vehicle. Case in point: The 2020 Volkswagen Atlas Cross Sport. Pitched as a smaller, sportier sibling to the three-row VW Atlas, this crossover-style SUV still feels big, heavy, and clunky, even if it does look a little more sporty than its bigger brother. 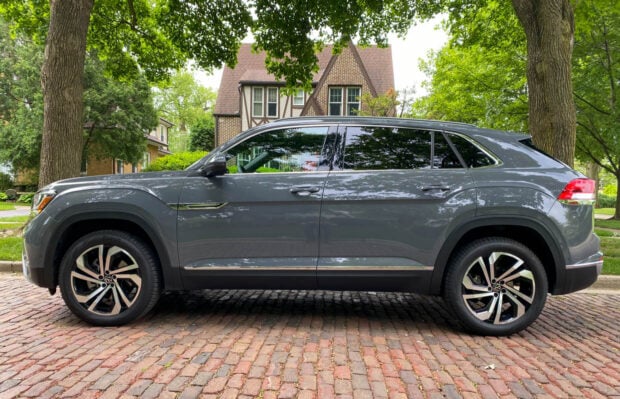 The Atlas Cross Sport is roughly 3″ shorter than the Atlas, so it’s designed to carry five passengers instead of six or seven. It’s roofline is more raked than the Atlas too, and it has a more aggressively styled front end. My top of the line V6 SEL Premium rode on handsome 20″ alloy rims, and there’s an even bolder R-Line trim which ups those to 21″ wheels. 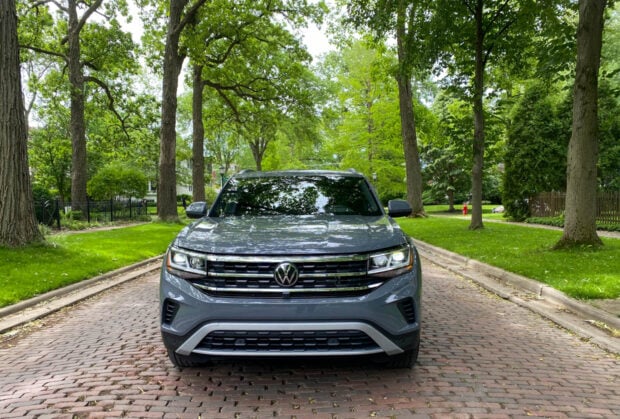 Like the Atlas, the base engine for the Atlas Cross Sport is a 2.0-liter 4-cylinder that makes 235 hp and 258 lb-ft. of torque. The engine I tested is the more powerful 3.6-liter V6, which outputs 276 hp and 266 lb-ft. of torque. Combined with an 8-speed automatic transmission, I found the engine to be sufficient for everyday driving, but certainly not notable in terms of acceleration or overall performance. With a curb weight of over 4,400 lb, the V6 doesn’t exactly sip fuel either, with an EPA estimated 16 mpg city, 22 mpg highway, and 19 mpg combined. Shockingly, during my week of mixed city and highway driving, I didn’t break 14.6 mpg, assuming the fuel economy display in the vehicle is to be trusted. I’d imagine that the turbo-4 is a bit more fuel efficient. 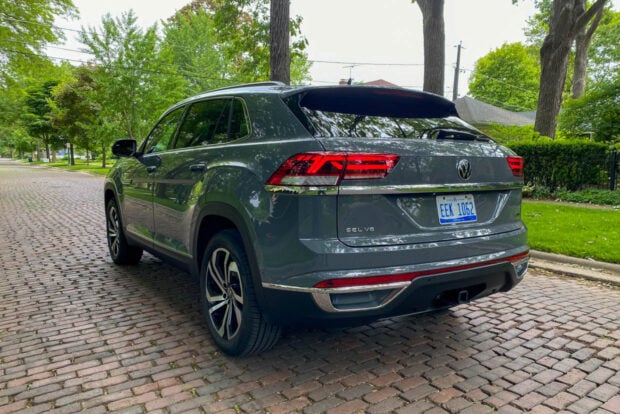 The overall ride quality of the Cross Sport is soft and floaty – again, not attributes that go with its “Sport” moniker. Despite being shorter than the Atlas, it still felt more boatlike than other modern crossover SUVs I’ve driven, with a noticeable amount of body roll when cornering, and a very light and indirect steering feel. I found it to be exceptionally quiet inside, even at highway speeds, though I did encounter an odd rubbing sound when turning the wheels entering or exiting parking spaces. 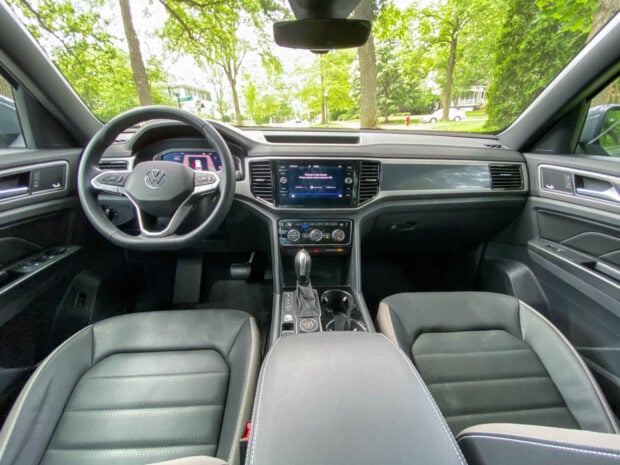 My tester was equipped with Volkswagen’s 4MOTION all-wheel drive system, which I’m sure will be very popular here in the Midwest, given our propensity for snow and ice in the wintertime. Since it was warm and dry when I had the Cross Sport, I didn’t get to put the system to the test, though I did get to tinker around with its various drive modes, which help provide optimal traction in snowy and off-road conditions. There’s also a sport mode which adds a little artificial steering weight and ups the shift mapping. You can also create a personalized mix of steering, traction, AWD, climate control, adaptive cruise, and adaptive front lighting modes. 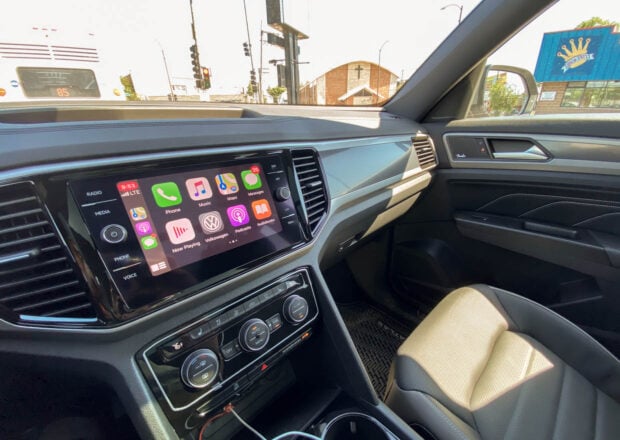 While the Atlas Cross Sport may disappoint in its driving dynamics, its design is quite well executed both outside and in. Tricked out in the SEL Premium trim, the cabin a rather nice place to be, with comfy real leather seating, dual-zone climate control, ambient interior lighting, heated/ventilated front seats, and a big panoramic sunroof with a front section that can slide open or vent. For what it’s worth, the cooled seats were a little underwhelming compared to others I’ve experienced. 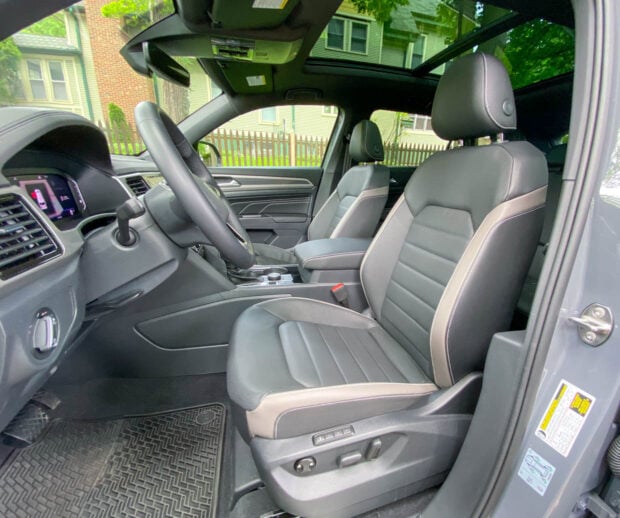 In terms of interior space, this is one place where both the Atlas and Atlas Cross Sport shine. There’s plenty of room for tall passengers in the second row, which also gets heat for its two outboard positions. While rear head room is down roughly two inches compared to the Atlas, there’s also two extra inches of legroom, and I felt quite comfortable back there, even though I’m 6-feet-tall. 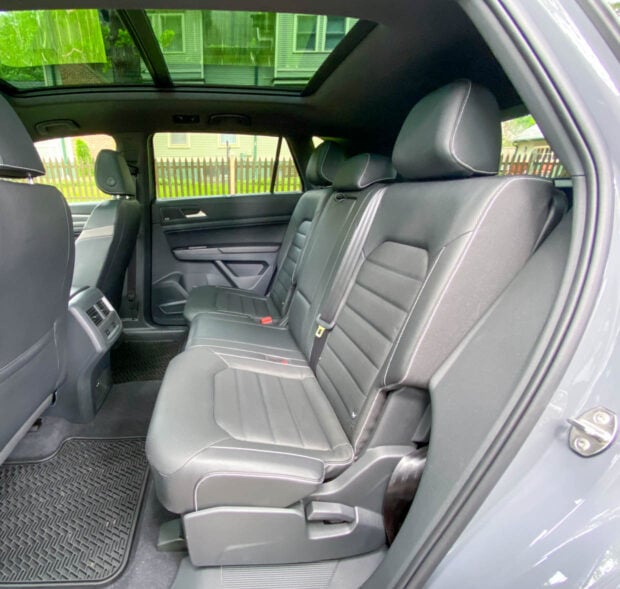 Cargo space is ample, with 40.3 cubic feet behind the second row, and an impressive 77.8 cubic feet with the second row folded. With the V6, the Atlas Cross Sport can also tow up to 5,000 pounds, making it versatile enough to carry along a couple of jet skis, dirt bikes, a small camper or a small boat. 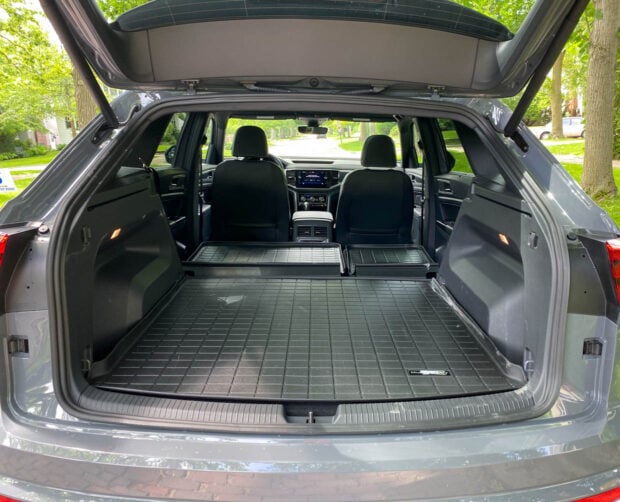 There’s plenty to like in terms of technology, starting with the digital instrument panel behind the steering wheel that can be used to display a variety of information, including navigation maps. The 8″ center touchscreen is compatible with Apple CarPlay and Android Auto, as well as VW’s Car-Net, which provides remote locking/unlocking, remote engine start, and other capabilities. The Fender premium audio system sounds excellent, offering great dynamic range, punchy bass, and lots of volume. 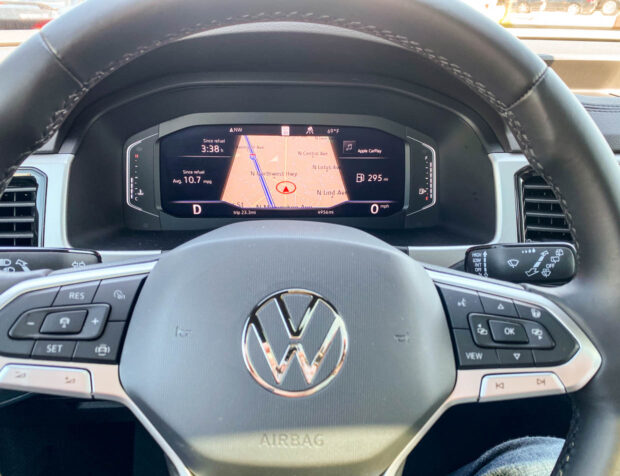 Safety and driver assistance features include adaptive cruise control, lane keep assist, blind spot monitoring, rear cross traffic alert, automatic high beams, dynamic road sign display, and more. There are also parking assistance features for those who struggle to get in and out of parallel and perpendicular parking spaces, though I find those kind of park assist features to be more trouble than they’re worth in every vehicle I’ve tested them in, and I just find parking for myself is faster and less frustrating. 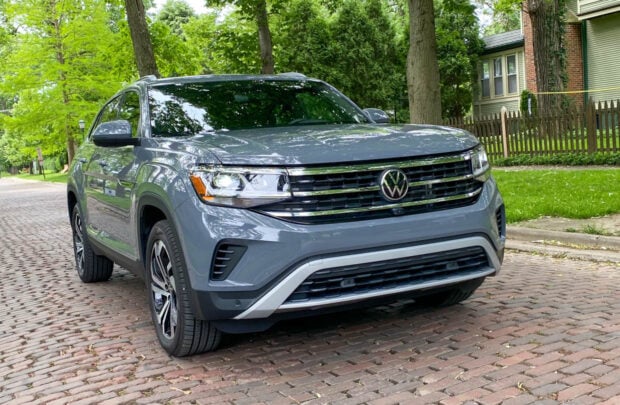 So what can I say? I really wanted to like the Atlas Cross Sport, but I didn’t. On looks alone, it’s a stylish and attractive vehicle. But its drivetrain is merely average, and its handling dynamics are just too mushy and old school in a world where you can get into something like a Mazda CX-9, a Volvo XC60 or XC90, or Kia Telluride, which all handle much better without losing any of the curb appeal.